New Delhi | Jagran Entertainment Desk: Deepika Padukone rules millions of hearts in India. The Bollywood diva is definitely an inspiration for many. Whether it is related to fashion or acting, the actress slays in all fields. Now, Deepika is set to make her international fans go gaga as the actress will make her appearance on one of the world’s top-most movie events, the Cannes Film Festival. Deepika will be one of the jury members of the Cannes Film Festival.

Cannes Film Festival on Tuesday announced the Jury President and the competition member jury who will be selecting the winners of this year's Palme d’Or honors 2022, and the dimpled actress is also a part of it.

Deepika walked the red carpet for Cannes for the first time in 2017. The actress took to her Instagram account and shared the image of other jury members including Oscar-winning filmmaker Asghar Farhadi, Jeff Nichols, Rebecca Hall, Noomi Rapace, Jasmine Trinca, Ladj Ly, and Joachim Trier. 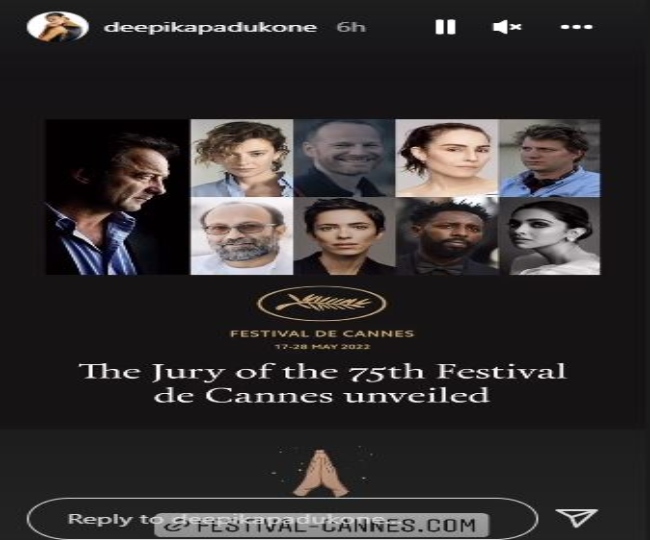 For the unversed, the Cannes Film Festival will begin on May 17 and the winner will be announced on May 28 by the jury.

Besides Deepika, another Bollywood Diva who is likely to walk the red carpet at Cannes is Aishwarya Rai Bachchan. As per a report by Pinkvilla, the Ae Dil Hai Mushkil actress will be once again seen attending the Cannes Film Festival 2022.

Meanwhile, on Deepika's work front, the actress was last seen in the Shakun Batra directorial Gehraiyaan. The actress will be next seen in Pathaan alongside Shah Rukh Khan and John Abraham. The actress has a bunch of films in her kitty including The Intern with Amitabh Bachchan, and Fighter with Hrithik Roshan.

On the other hand, talking about Aishwarya's work front, the actress is currently working on Mani Ratnam’s much-anticipated movie Ponniyin Selvan along with Vikram, Jayam Ravi, and Karthi, among others.

PLT IN SECOND = 0.001871199
Jagran English brings you all the latest and breaking news from India and around the world. Get live English news from India, World, Politics, Entertainment, Lifestyle, Business, Education, Sports, Technology, and much more. Follow english.jagran.com to stay updated with the latest English news.
Copyright © 2022 Jagran Prakashan Limited.