Deepika Padukone and Ranveer Singh have been everyone's favourite. The couple has set some major relationship goals in front of their fans. However, a few days ago, a bunch of rumours started doing rounds on the internet that the couple's relationship is in the middle of a crisis and soon they can part ways. These rumors broke the hearts of millions as the couple is adored by their fans. However, now, the two have put an end to the separation rumours with their flirty chat on social media.

Deepika and Ranveer are famous for their social media PDA (public display of affection) and this time as well, the couple cleared the air when Ranveer shared a picture on his Instagram handle and his ladylove Deepika was the first one to drop the comment. The Padmaavat actress took to the comment section and wrote, 'Edible'. 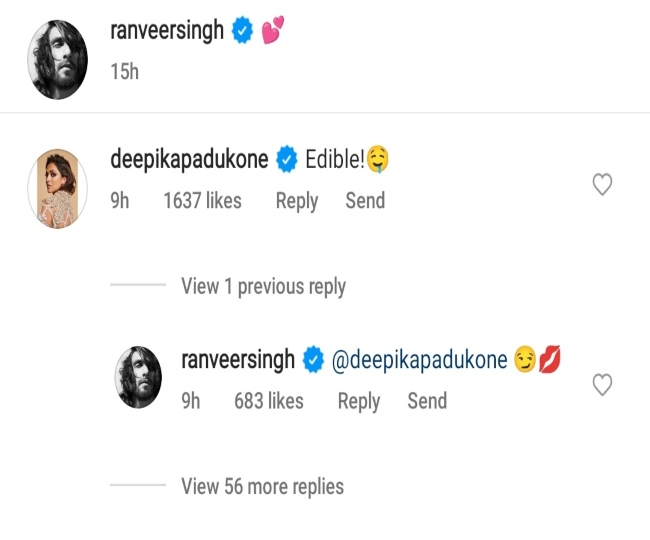 Ranveer and Deepika have a massive fan following across India. The actors adored their relationship. For the unversed, Ranveer and Deepika tied the knot on 2018 - November 14. Before getting married, the duo was dating for almost six years. The rumours about the relationship between both the actors separating ways broke the internet. However, with their flirtatious comments, it is safe to say that both the actors are still in love and their relationship is going strong.

Meanwhile, talking about Ranveer Singh's work front, the actor was last seen in Jayeshbhai Jordaar and will be next seen in Dharma Production's Rocky aur Rani Ki Prem Kahani alongside Alia Bhatt. He also has Rohit Shetty’s movie Cirkus in the pipeline. Deepika on the other hand was last seen in Gehraiyaan and will be next seen in Pathaan, alongside Shah Rukh Khan and John Abraham. Deepika will also be seen in 'The Intern' remake and 'Project k' with Amitabh Bachchan.