New Delhi | Jagran Entertainment Desk: The coronavirus-induced lockdown has forced people locked up in their homes for over two months now. Similarly Bollywood celebs are restricted in their homes and are not able to get their beauty and makeover treatments regularly.

Recently, Kartik Aaryan conducted an Instagram live session with fans, during which, he asked his fans if they liked his new look with this long beard-- 'hairy and bushy!', to which many of them answered in a big no and suggested him that he should get it trimmed.

One among those who voted for no, was actress Deepika Padukone, who commented a raising hand emoji on Kartik Aaryan’s question, and indicated that he should trim his beard. 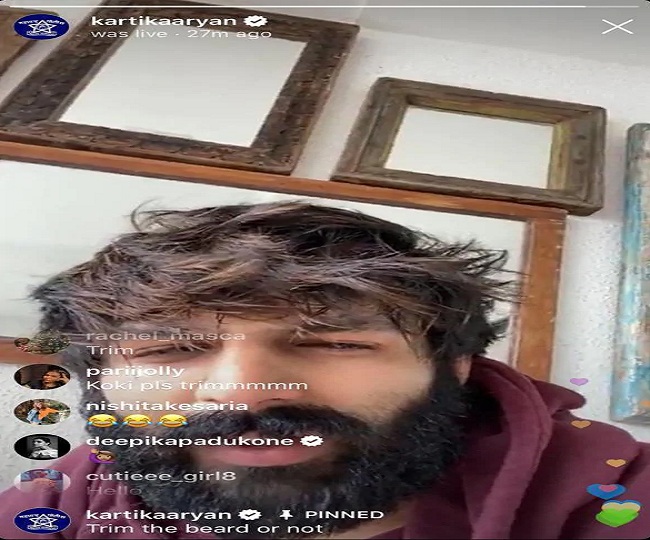 Though the majority was telling him to get off this hairy look, the Celebrity stylist Anaita Shroff Adjani popped up with a funny perspective. In a dissent to the stand of Deepika Padukone and a majority of Kartik Aaryan's fans, Anaita wrote, "No, Learn cooking," telling him that he should prefer to learn cooking instead.

Before the live session, Kartik has posted a clean shaved picture of himself on Instagram, so that fans could give him a better comparative analysis on which look he should go ahead with.

Also Read
‘Why should they come to my house’: Sonu Sood’s response wins hearts after..

The actor was last seen in 'Love Aaj Kal 2,' co-starring with Sara Ali Khan, though the movie didn't work well in the box office and gathered an estimate of 52.63 crores. Kartik will be next seen in the sequel of Bhool Bhulaiyaa later this year, co-starring with Tabu, and Kiara Advani. The movie is scheduled to be released in July, though dates could fluctuate due to the coronavirus pandemic.