Alia Bhatt has got everything prepared for her isolation period and she is gearing up to watch some movies. Want to know which movies is she going to watch? Read on to know more.

New Delhi| Jagran Entertainment Desk: Alia Bhatt never fails to keep her fans updated. Be it posting her home quarantine picture or by sharing the loved up photos with her beau Ranbir Kapoor, she surely knows how to keep her fans hooked. The Badrinath Ki Dulhania actress enjoys a massive fan following of 52.1 million followers. Recently the actress tested positive for coronavirus and since then, her fans are flooding her comment section with heartfelt messages for her speedy recovery.

However, it looks like, Alia has got everything prepared for her isolation period and she is gearing up to watch some movies. Want to know which movies is she going to watch? Alia shared the list of movies and titled it as her isolation watch list. Check out: 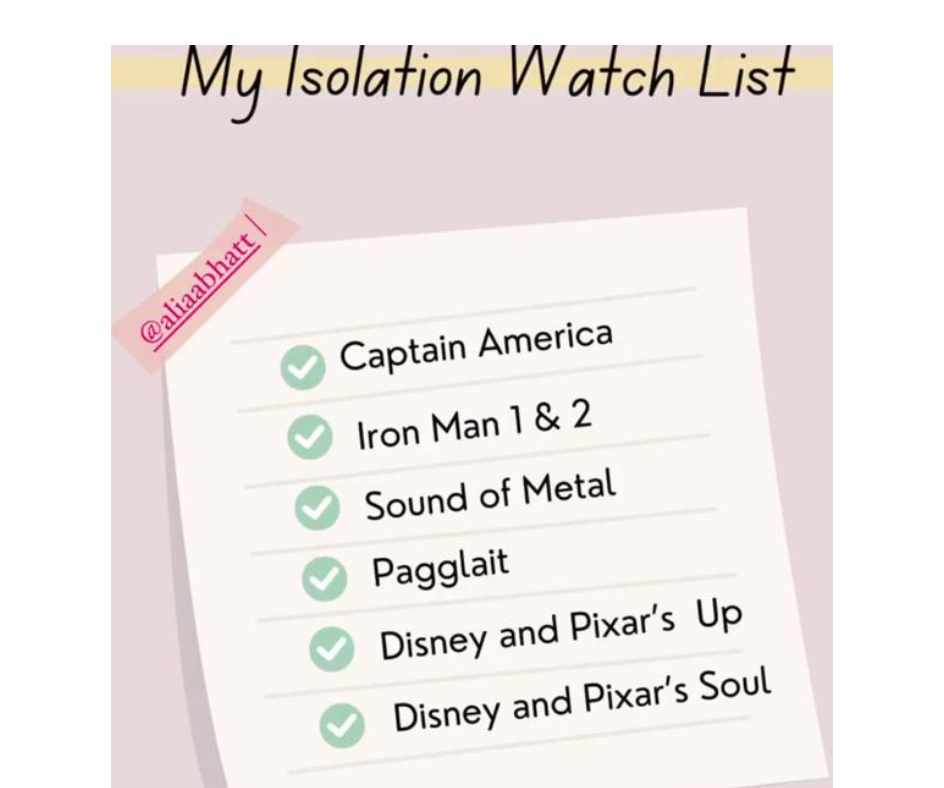 Alia's Thursday to Monday movie routine includes both Hollywood and Bollywood films. She added six movies to her list that are - Captain Marvel, Iron Man 1 &2, Sound of Metal, Pagglait, Disney and Pixar's Up, and Disney and Pixar's Soul.

Recently, Alia also shared a selfie from her home quarantine time in which she was looking radiant and was hugging her soft toy. She shared the picture on Instagram with a caption, that read, "One day at a time.”

As soon as she shared the picture, fans bombarded the comment section with lovely messages. One of the users wrote, "Get well soon." Another wrote, "wish you recover soon so that we can see more pictures of you."