Bigg Boss 15 Weekend Ka Vaar: Will Sahil Shroff be the first contestant to get evicted from BB House? Know here

Bigg Boss 15 Weekend Ka Vaar: In just one week a lot happened in the house, many contestants were able to leave a mark, while some failed to entertain the audience.

New Delhi | Jagran Entertainment Desk: Colors most controversial show, Bigg Boss 15, is going to air its first Weekend Ka Vaar episode today, October 9. In just one week a lot happened in the house, many contestants, including Karan Kundrra, Pratik Sehajpal Ieshaan Sehgaal and Tejasswi Prakash, were able to leave a mark, while some, such as Donal Bisht and Sahil Shroff, were unable to entertain the audience.

Based on this, BB 15's first eviction will be decided by the makers. As per a Real Khabri, a Twitter Bigg Boss page, this weekend Salman Khan will announce the first eviction, and it's none other than model Sahil Shroff.

Taking to its Twitter handle the Khabri wrote, "Its Confirmed from our source too #SahilShroff is eliminated from the house" 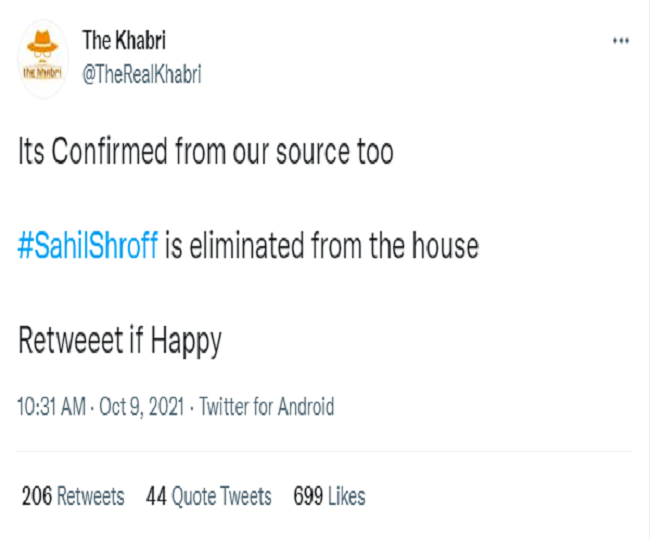 Well, the decision seems to be fair as Sahil's contribution in the house and to entertain the viewers was negligible. He was nowhere seen in the house in the last seven days.

The Weekend Ka Vaar episode will be high on drama and entertainment as Salman will be seen bashing Pratik for breaking the lock of the bathroom while Vidhi Pandya was taking shower. (Click here to read the full news)

Also, celebs like Rahul Vaidya, Nia Sharma, Astha Gill, Karan Patel, Dhvani Bhanushali, Arjun Bijlani and Manike Maga Hite fame Yohani will be seen gracing the stage with Salman Khan as a guest. The show will be seen celebrating Navratri and even Bollywood superstar will be seen looking dashing in sky blue pathani.

Coming back to the Weekend Ka Vaar episode, it will air on Colors at 9:30 pm.