New Delhi| Jagran Entertainment Desk: Television actor Nishant Singh Malkhani is among several other celebrities that are touted to enter Bigg Boss house for the upcoming fourteenth season of the controversial reality TV show. Now the makers have released a new promo in which a man is dancing on the song 'Ghungroo' and has left netizens in curiosity and many are speculating that this mystery guy is Nishant Singh Malkhani.

However, last year in Bigg Boss season 13, the wild card contestant, Vishal Aditya Singh made his superb entry on the same song 'Ghungroo' and that is making netizens wonder that if this mystery guy is going to follow the footsteps of Vishal Aditya Singh in this season.

Some of the users commented that this contestant is none other than Nishant Singh Malkhani, who rose to fame with his show Ram Millayi Jodi and Guddan Tumse Na Ho Payega where he played the role of Anukalp Gandhi and Akshat Jindal respectively
Nishant has not just been a part of small screen but has done several films including Bezubaan Ishq, Horror Story, Love Training among others. But none of them fared well at the box office. The 33-year-old actor has also done other television shows like Pyaar Kii Ye Ek Kahanii. The actor also did a cameo in Sasural Genda Phool. 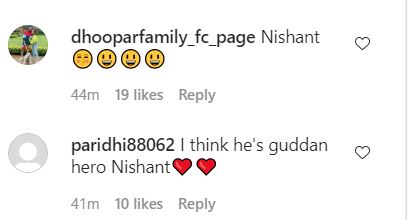 According to the Times of India report, "Nishant was approached for Bigg Boss 14 about a month back, but he was in two minds about it as Guddan was also doing well. But the actor has now quit the show and has shot the last episode."