New Delhi | Jagran Entertainment Desk: TV actor Jasmin Bhasin hit the limelight after her stint in Bigg Boss 14. The gorgeous actress is painting the town red with her boyfriend, actor Aly Goni and never fails to give couple goals to her fans. However, more than her love affair, the actress is in news for her scintillating looks in her recent social media post.

Recently, Jasmin posted her jaw-dropping pictures on her Instagram handle leaving her fans awestruck. In the pictures, she can be seen wearing a loose white shirt dropping off her shoulder as she poses for the camera. Jasmin captioned the picture, “Eyes for you” followed by a red heart emoji.

As soon as she dropped the post, netizens bombarded her comment section appreciating her bold avatar. the first one to comment was her darling boyfriend Aly Goni. He couldn’t hold himself back from dropping a lovely message in the comment section and wrote “Heart for u” along with a red heart emoticon. It looks like Jasmin wrote the caption of her picture for Aly only and it worked well.

Jasmin's recent picture not only smitten Aly but fans also went berserk and showered with her compliments and love. They started pouring in ‘fire’, ‘heart’ and ‘lovestruck’ emotions in the comment section. However, among all one comment grabbed out eyeballs that will leave you in splits. Appreciating the looks of Jasmin, a user wrote "Inhe toh jail mai hona chahiye Apne adaon see roj ghayal karne ke julm me" with a love-struck emojis. 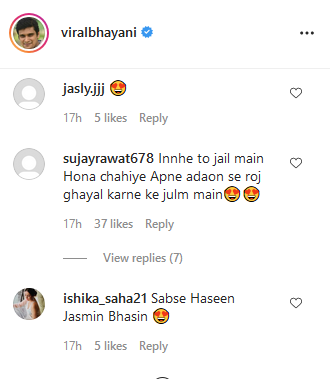 Earlier, speaking about his marriage plans with Jasmin Aly told “I have made up my mind. I want to marry her, mujhe pata hai agar shaadi karni hai toh issi se karni hai. We haven’t decided on the date yet, but I am very sure that Jasmin is the girl for me,” as quoted by Times of India.