New Delhi | Jagran Entertainment Desk: Bhool Bhulaiyaa 2 and Dhaakad are one of the most anticipated films released in May 2022. There was a lot of curiosity amongst the audience to watch these films. First, the audience was eager about Bhool Bhulaiyaa 2 because it is the sequel to the superhit and iconic film Bhool Bhulaiyaa. Secondly, Dhaakad created a lot of excitement because it showcased a strong portrayal of a female spy and we also got to see some amazing action sequences in the trailer. Even though the genre of Bhool BHulaiyaa 2 and Dhaakad is completely different but there is still a competition between these movies as they were released on the same day. Now the verdict of these movies is out as well. Find out the box office collection of both the film.

According to Box Office India, the two day business of Bhool Bhulaiyaa 2 is approximately Rs 31 crore. Moreover, the film is going to collect Rs 50 crore nett plus total. Bhool Bhulaiyaa 2 also had the second-highest opening in the post-pandemic era.

Box Office India mentioned that Dhaakad collected Rs 50 lakh on day 1. Meanwhile, on day 2, Dhaakad is struggling to show growth at the box office and is not able to earn like Bhool Bhulaiyaa 2.

According to film critic and trade analyst Taran Adarsh, Bhool Bhulaiyaa 2 earned Rs 14 crore on Day 1. It surpassed the earnings of big-budgeted movies like Bachchhan Paandey and Gangubai Kathiawadi. Moreover, Bhool Bhulaiyaa 2 has become the biggest opener for Kartik Aaryan.

The team of Bhool Bhulaiyaa 2 expressed their gratitude to the audience for the amazing response. 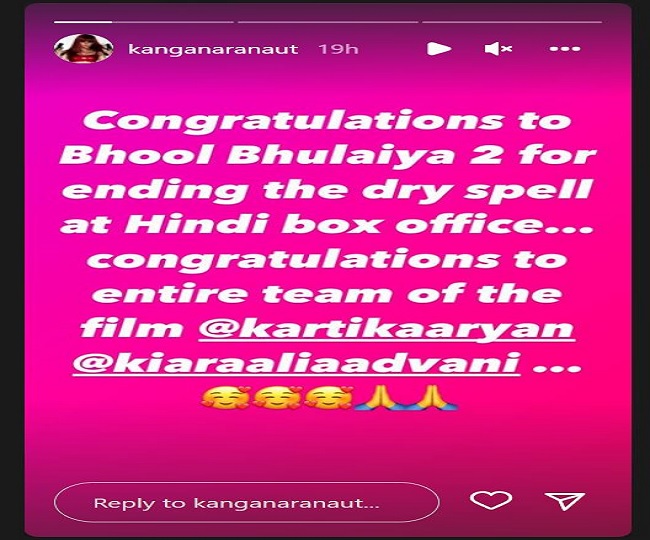 Directed by Anees Bazmee and produced by Bhushan Kumar under the banner T-Series, Bhool Bhulaiyaa 2 was released in theatres on May 20, 2022. The movie stars Kartik Aaryan, Kiara Advani, Tabu, Sanjay Mishra and Rajpal Yadav.

Also Read
'Film That Took My Everything': Vijay Deverakonda Unveils His New Look..

Directed by Razneesh Razy Ghai, Dhaakad is backed by Deepak Mukut and Sohel Maklai and co-produced by Hunar Mukut. The movie was released in theatres on May 20, 2022. It stars Kangana Ranaut, Arjun Rampal, Divya Dutta, Saswata Chatterjee and Sharib Hashmi.