Ranveer Singh and Arjun Kapoor are known for their brotherly bond and duo never fails to impress their fans more with their short meetings.

New Delhi | Jagran Entertainment Desk: Bollywood celebs are known for sharing the strongest bonds with each other whether it's a BFFs bond like Kareena Kapoor Khan, Mallika Arora, Karisma Kapoor and Amrita Arora or a father-daughter bond like Karan Johar and Alia Bhatt. And one such relation is shared by Ranveer Singh and Arjun Kapoor. The two celebs are known to share the strongest 'bro bond' and are one of the craziest duos of the entertainment industry.

Whenever the duo comes together, they never fail to impress their fans and always hits the headlines. Something like this happened on Wednesday when they met each other after a long time. According to the reports, paparazzi spotted Ranveer Singh and Arjun Kapoor in the former's new Mercedes Maybach GLS. The duo was seen having a gala time together as they went on a ride around town.

Not just this, taking to Instagram, Ranveer dropped an adorable picture on his story wherein he can be seen giving a peck on Arjun's cheeks. The jumping jack captioned the image as "Bharat Milap". 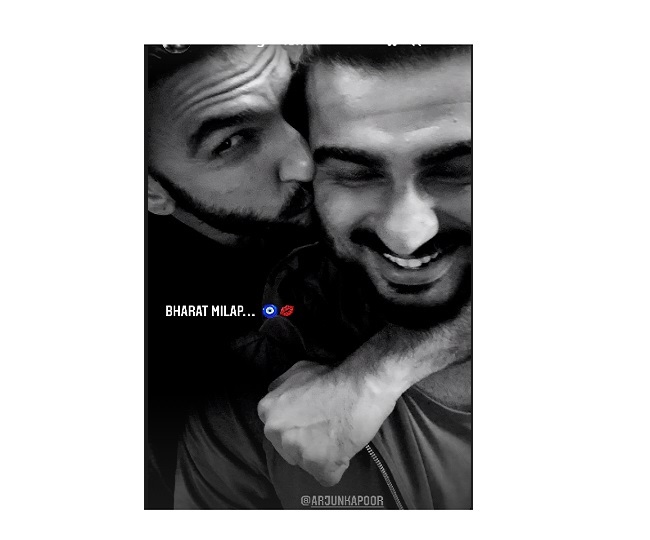 With time Arjun and Ranveer's bonding has grown stronger and deep. For fans, their bonding seems to grow from Gunday days, but not many know that they had known each other since kids as Ranveer is Sonam Kapoor's maternal cousin. In an old post, Arjun had called Ranveer his 'brother from another mother'.

After seeing Ranveer and Arjun's chemistry in Gunday, their fans are eagerly waiting for them to return on the screen together. Recently in an interview with India.com, Arjun opened up on reuniting with Ranveer and was quoted saying, "We both would love to (do a movie together). We are constantly in touch and we behave as silly as always. Gunday was ahead of its time in terms of two boys being put together in a nice commercial entertainer. It’s inevitable that I and Ranveer will be back soon. Now is the time for these kinds of ensemble movies I believe."