Arjun Kapoor has posted a throwback picture with Bhumi Pednekar from the sets of The Lady and The Lady Killer.

New Delhi | Jagran Entertainment Desk: Bollywood actor Arjun Kapoor remains active on social media and keeps his fans updated about his personal and professional life. He often shares fitness related videos, sometimes gives sweet birthday wishes to his B-town friends or shares some behind the scene pictures or footage from his films on social media. Recently, Arjun was shooting for his upcoming film The Lady and The Lady Killer and has shared a sweet picture with his co-star Bhumi Pednekar.

To this picture, Bhumi replied, "Am missing the snow here now. Not the same vibe babe but better #TheLadyAndTheLadyKiller". Meanwhile, Rakul Preet commented a fire and a heart emoticon on the post. Bhumi and Arjun were in Manali recently to shoot for their upcoming film The Lady and The Lady Killer. In this monochrome picture, Bhumi and Arjun can be seen covered in snow. Bhumi has covered herself with a shawl, whereas Arjun can be seen in a jacket.

A few days ago, both Arjun and Bhumi shared a picture standing in the snow. Arjun wrote, "Saw snow, felt cute, might delete later (not) #LadyAndTheLadyKiller @bhumipednekar #GoodMorning #TheLadyKiller #Love #Hills #Manali." In the picture, Bhumi sported a puffed white jacket with blue denim and boots. Arjun can be seen wearing a grey jacket with black jeans.

A while ago, Bhumi had put a story on Instagram to ask her questions and a fan asked her about Arjun Kapoor. To this, Bhumi wrote, "@arjunkapoor has the best sense of humour. So witty and kind. Super sweet and the most compassionate ever. Also look out for some hotness in ladykiller. #TheLadyAndTheLadyKiller". 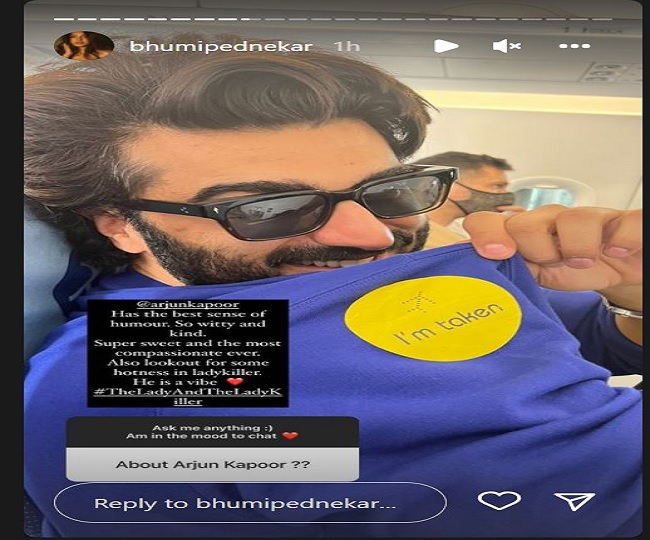 On the work front, Bhumi will be seen in Shashank Khaitan's comedy Govinda Naam Mera, also starring Vicky Kaushal and Kiara Advani. She will star in Anand L Rai's Raksha Bandhan and will work with Rajkumar Rao again in Bheed. She was last seen in Badhaai Ho. Meanwhile, Arjun Kapoor will be seen in Ek Villain Returns with Tara Sutaria and will also star in Kuttey.