Taking to Instagram stories, Anushka dropped a cute selfie with Virat from their vacation. In the picture, Anushka can be seen holding Virat as they rested their head on each other. The couple gave a million-dollar smile to the camera.

New Delhi | Jagran Entertainment Desk: One of the most loved in the industry has to be Anushka Sharma and Virat Kohli. The duo definitely gives a couple of goals to all their fans. Both, Virat and Anushka are frequent social media users and often share mushy pictures. Similarly, Anushka shared a lovely selfie with her husband, Virat Kohli, hours after getting papped at the airport. After watching the picture, fans could not stop gushing about it.

Taking to Instagram stories, Anushka dropped a cute selfie with Virat from their vacation. In the picture, Anushka can be seen holding Virat as they rested their head on each other. The couple gave a million-dollar smile to the camera.

The PK star can be seen wearing a multicolored attire, accessorizing the entire look with several chains around her neck. The actress kept her hair casual and looked absolutely stunning. Virat Kohli, on the other hand, opted for a sleeveless brown tang-top.

The picture was so adorable that it did not need any caption for it. 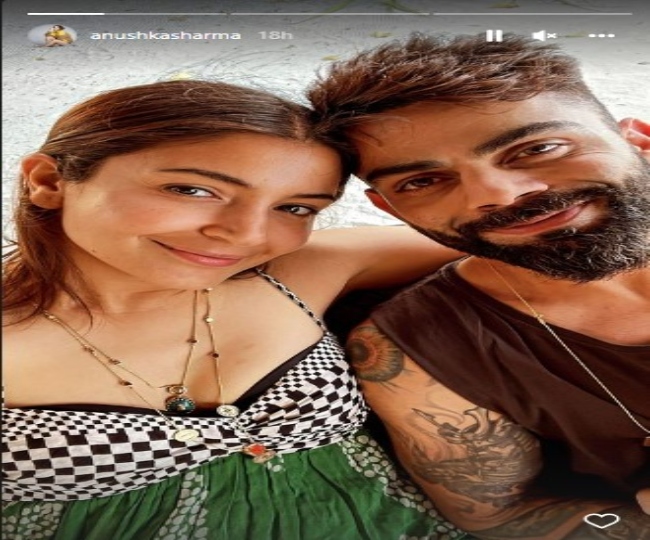 Before Anushka's post, the couple was spotted at the Mumbai airport, holding each other's hands. Anushka was seen wearing a green shirt and denim shorts for the travel, whereas Virat went for a peach t-shirt and white jeans along with a pair of white sneakers.

Meanwhile, on Anushka's work front, the actress is all set to make a powerful comeback with her upcoming film Chakada Xpress. Anuska was in Zero on the big screens. Anushka's upcoming film Chakda Xpress is a bio-pic of the former captain of India's national women's cricket team Jhulan Goswami.

Also Read
Stranger Things Season 4 Volume 2: Here's What You Can Expect Next In The..

For the unversed, Anushka tied the knot with Virat Kohli on December 11, 2017, in an intimate ceremony in Italy. The couple has been blessed with an adorable daughter Vamika.