New Delhi | Jagran Entertainment Desk: Star Plus show 'Anupama' is one of the most watched tele-serials. The show with it's concept has garnered audience from all the age group. The shows popularity is marked when it ranked number one for several weeks constantly. Fans are always eager to know what will happen next in this serial.

Teasing fans for a next big twist in the serial, star cast of the show and official twitter handle of star plus has shared hints. Actually, a romantic twist is about to come in the show and it has been hinted by Anupama herself i.e. Rupali Ganguly.

Rupali took to her Instagram handle to share the information. In the Insta story she wrote,"Wo aa raha hai." Rupali has shared a photo, in which she is seen dressed in a sari and wearing gajra in her hair. Rupali is shaking hands with a person.Her Instagram story confirmed that person is Gaurav Khanna. He will enter the show and play the character of Anuj.

Also Read
Bigg Boss OTT Finale: When will the finale start? Who all are finalists.. 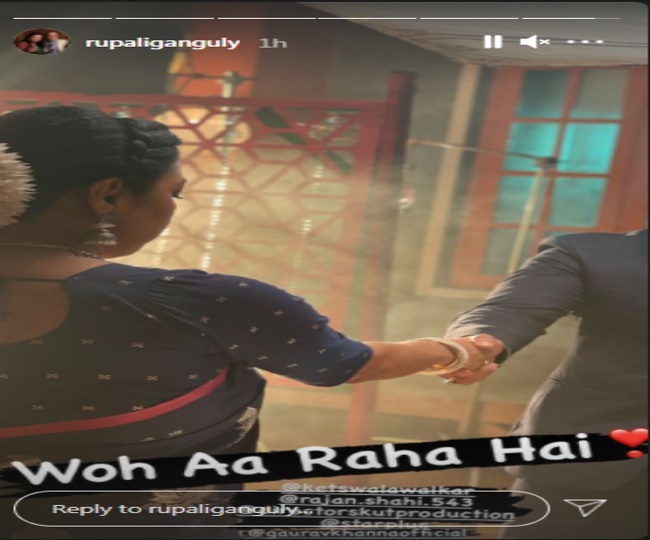 Reports suggests that Anuj Kapadia is a successful and well-known businessman who is also Anupamaa's close friend. His entry in the show will bring a lot of changes in Anupamaa, Vanraj and Kavya's life. With the arrival of Gaurav, new twists and drama will enter Shah's house. It is said that many actors including Ronit Roy were approached for this role, but the role went to Gaurav.

In the show Anupamaa, while the Shahs conquers new problem they see a new hope in Anuj Kapadia. The business tycoon, Anuj Kapadia is coming back to Ahmedabad and he wants to make a deal with the Shahs. With new plot twist, Let's hope Anupama fans can enjoy watching Anuj at service to help Anupama.