Alia was last seen in the film Sadak 2.

New Delhi|Jagran Entertainment Desk| Alia Bhatt has been at the receiving end of the nepotism debate, fuelled by the death of actor Sushant Singh Rajput. The Sadak 2 actor has, so far, maintained a dignified silence even as she has been the target of vicious online trolling. As a section of film fraternity extended support to Rhea Chakraborty who was arrested on Tuesday on drug-related charges in Sushant Singh Rajput case, the 27-year-old shared a cryptic message using a quote from popular child fiction book Harry Porter. "

Taking to Instagram, Alia wrote, "Don't let the muggles get you down." The Harry Potter character Ronald Weasley said this dialogue to Harry. In this dialogue, he points out Harry's guardians, as muggles.

The meaning of the word muggle is who does not have magical powers. This phrase also means that "don't let the unwanted people make you sad." Ron said this dialogue to Harry to cheer and encourage him.

Here have a look at the story: 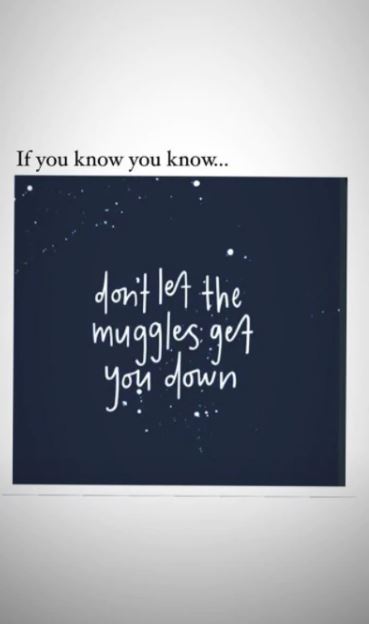 On Tuesday, several Bollywood celebrities showed support to Rhea by posting a quote "Roses are red, violets are blue, let's smash the patriarchy, me and you," written on her T shirt. The celebs include Anurag Kashyap, Shibani Dandekar, Dia Mirza, Pulkit Samrat, Farhan Akhtar, Kareena Kapoor Khan, Sonam Kapoor, Abhay Deol among shared the quote that was written on the t-shirt of Rhea Chakraborty on Tuesday when she was sent to 14-day judicial custody.

Also Read
‘Out of quarantine, but have to follow bio-bubble rules’: Preity Zinta all..