Richa Chadha on Thursday issued an apology on Twitter after getting brutally trolled by netizens over "Galwan Says Hi" tweet.

Bollywood actress Richa Chadha, after getting brutally trolled by netizens for her comment on the Galwan 2020 clash, in which several Indian soldiers lost their lives, has now issued an apology statement. Meanwhile, a lawyer in Delhi has also filed a complaint against her accusing her of mocking the Indian Army.

Taking to Twitter, she said, "Even though it can never be my intention in the least, if the 3 words which are being dragged into a controversy have offended or hurt anyone, I apologise and also say that it would sadden me if even unintentionally my words have triggered this feeling in my brothers in the fauj (army) of which my own Nanaji has been an illustrious part. As a Lt Col, he took a bullet in the leg in the Indi-China war, in the 1960s. My Mamaji was a paratrooper. It's in my blood.

Also Read
Priyanka Chopra Sizzles In A Yellow Bikini As She Enjoys Her Weekend..

"A whole family is affected when a son is martyred or even injured while saving the nation which is made up of people like us and I personally know how it feels. It is an emotive issue for me."

We are fully prepared to take back PoK from Pakistan. We are waiting the orders from the govt. We will complete the operation quickly. Before that if Pakistan is violating ceasefire, the answer will be different, even they cannot imagine - Commanding-in-Chief Northern Command IA," he said.

However, the Fuckrey actress, re-sharing this tweet earlier today, had said, "Galwan says hi", which did not sit well with several twitter users. 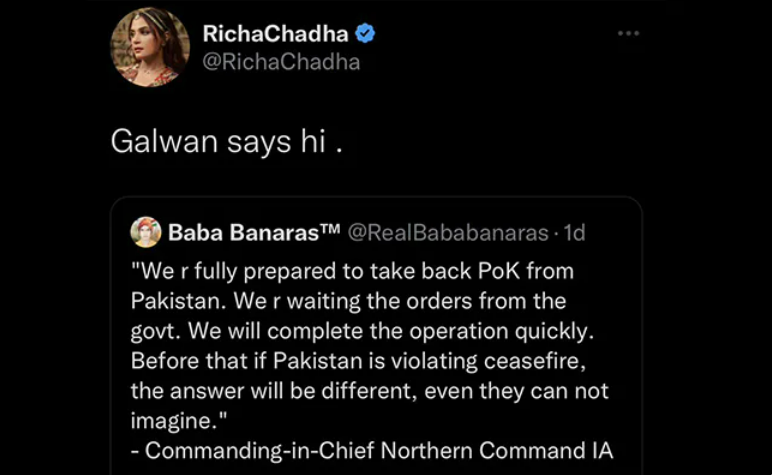 They began trolling her mercilessly on the microblogging site for "mocking" and "insulting" the valour of the Indian armed forces.

"An actor Richa Chadha has made a joke dragging Galwan valley in her tweet. I demand the Chief Minister and Home Minister to take stringent action on this. Such actors, who make anti-national tweets should be banned, " Shiv Sena spokesperson, Anand Dubey told ANI.

BJP leader Manjinder Singh Sira tweeted saying that insult to our armed forces cannot be justified. "Disgraceful tweet. Should be withdrawn at the earliest. Insulting our armed forces is not justified, " he said.

Disgraceful Tweet. Should be withdrawn at the earliest. Insulting our armed forces is not justified. https://t.co/eetOjHrDor

20 Indian brave-hearts sacrificed their life for India in Galwan, but here is an Urduwood actor mocking Indian Army.

Not only sad but shameful.
A new low from @RichaChadha ! pic.twitter.com/XAwzdPFvEG

The price of freedom is borne by our dead. I am aghast. The fallen men of Galwan skirmish don't deserve to be mocked at!!
Jinhe Hind Par Naaz hai wo kahan hai??? pic.twitter.com/ofygYLJCNb

It is noteworthy that in jJune 2020, Chinese and Indian soldiers clashed in the Galwan valley, resulting in the deaths of 20 Indian soldiers. Although several Chinese soldiers also lost their lives, china has never publicly stated how many of its own troops were killed.