Actor Ram Kapoor is one of the most renowned faces of the television world gaining huge popularity for his roles in various television soaps. Mainly known for his character of 'Ram Kapoor' in 'Bade Acche Lagte Hai' the television star was massively loved by many across the country.

Maintaining a popular fan following in the television industry, the actor made his television debut in 1997 with the show 'Nyaay.' Recently, the actor is again in limelight for his whopping purchase of Rs 3.50 crore, where the actor bought the Ferrari Portofino.

Giving a sneak peek of his purchase, the actor was also seen posing with his new beauty accompanied by his wife actress Gautami Kapoor. 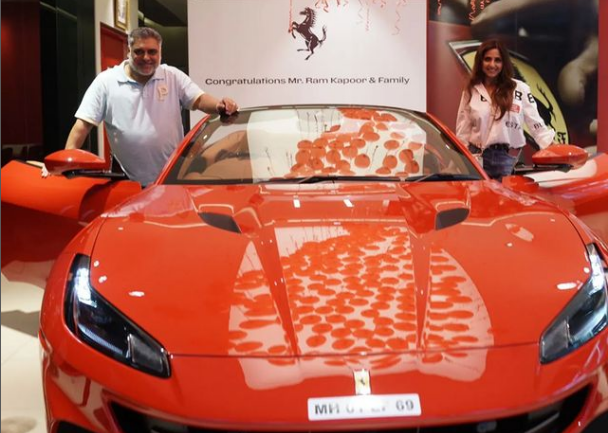 In 2000, Ram Kapoor appeared in the show 'Ghar Ek Mandir', where he met his future-wife Gautami Gadgil, playing the role of Ram's bhabhi on the show and later becomes his wife in the serial as well. Taking their on-screen chemistry to their off-screen romance, the duo tied the knot on February 14, 2003, after dating for 3 years.

Later, the actor became a recognized face with his role as 'Jai Walia' in the show 'Kasamh Se.' Calling himself a car-savvy Ram Kapoor has indeed worked hard to make his dream come true. The actor also has a beautiful Porsche 911 Carrera S in his garage worth over Rs 1.8 crore.

The latest edition in Kapoor's garage is a retractable hardtop convertible sports car that comes from the exotic house of the Maranello giant.

With his recent purchase, Ram Kapoor has thus joined the list of other celebrities owning the same model including Naga Chaitanya, Bhushan Kumar and others. Ram Kapoor has bought the exotic signature red color where the Italian car manufacturer names the solar scheme as 'Rosso Corsa.'