Rajkummar Rao took to his Instagram handle and shared a picture of the film's poster along with a caption for his late friend and co-star Sushant Singh Rajput. Read on to know more

New Delhi | Jagran Entertainment Desk: 2013 film 'Kai Po Che!' has completed 8 years and to mark the special day, one of its actors Rajkummar Rao remembered Sushant Singh Rajput who also played the lead in the film. Rajkummar took to his Instagram account and penned down a heartfelt note for the late star.

Raj shared a picture of the film's poster on his Insta story and wrote, "As if it was yesterday when Sushant, Amit and I were shooting for the film. You are being missed my dearest @sushantsinghrajput," 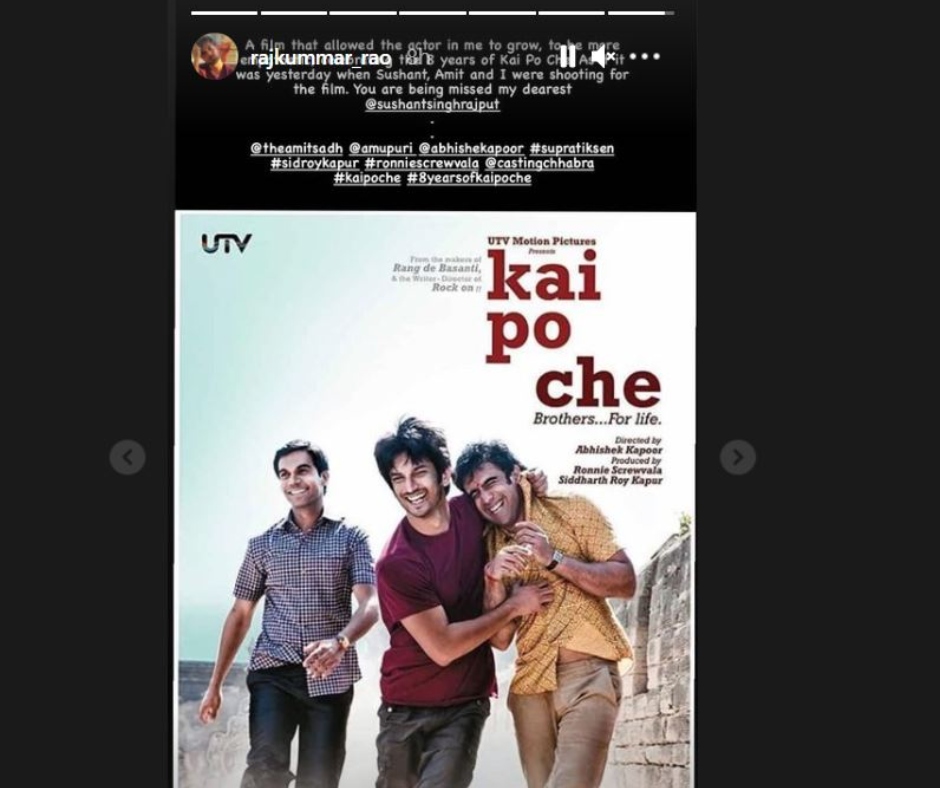 Amit Sadh, the third lead star of 'Kai Po Che!' took to his social media account and reposted Rajkummar's story. Along with it, Amit said, "Something we cherish for life... and some void..."

The director of the film Ronnie Screwvala remembered Sushant and called him a "crown jewel".

Sushant Singh Rajput died last year on June 14 after allegedly committing suicide. His death shocked the entire nation and everyone right from his fans to celebrities started talking about mental health and depression more than before. His death also sparked a few controversies like the Bollywood drug case, Rhea Chakraborty's arrest, etc which grabbed the attention of the media.

Meanwhile, talking about 'Kai Po Che!', the film was released in 2013 and was loosely based on Chetan Bhagat's novel 'The 3 Mistakes Of My Life'. It was about three friends based in Ahmedabad and their simple yet big dreams. The film was directed by Abhishek Kapoor and also starred Amrita Puri. Ronnie Screwvala and Siddharth Roy Kapur were the producers of the film.