Catch all the highlights here

New Delhi | Jagran News Desk: At least 76.09 per cent voter turnout was registered till 5 pm in 35 assembly constituencies where voting was held for the eighth and final phase on Thursday and the polling was peaceful, Chief Electoral Officer (CEO) Aariz Aftab said. Polling was held between 7 am and 6.30 pm in 11 assembly constituencies each in Murshidabad and Birbhum districts, six in Malda and seven in Kolkata.

"The polling was peaceful today apart from a few incidents of violence," Aftab said. Birbhum district registered the highest voter turnout of 81.87 per cent, followed by Malda (80.06 per cent), Murshidabad (78.07 per cent) and Kolkata (57.53 per cent), he said. The Election Commission has deployed 641 companies of security forces for the final phase. Votes will be counted on May 2.

Here are the Highlights of Polling:

18:21 pm: Polling conducted peacefully today across 11,860 polling stations across 35 Assembly constituencies, in the last phase of Assembly elections in West Bengal. Voter turnout of 76.07% was reported so far: Election Commission of India

3:30 pm: Congress MP and party's state chief Adhir Ranjan Chowdhury casts his vote for the eighth and final phase of #WestBengalElections at a polling booth in Murshidabad.

2:00 pm: TMC supporters gherao car of BJP candidate Kalyan Chaubey in Maniktala, North Kolkata. He says, "Our polling agent was sitting inside when a 50-yr-old woman came to vote instead of a 31-yr-old woman. When the agent objected she was scolded. This is hooliganism of TMC."

#WATCH | TMC supporters gherao car of BJP candidate Kalyan Chaubey in Maniktala, North Kolkata. He says, "Our polling agent was sitting inside when a 50-yr-old woman came to vote instead of a 31-yr-old woman. When the agent objected she was scolded. This is hooliganism of TMC." pic.twitter.com/2aTzFdWevc

1:20 pm: Trinamool Congress writes to Election Commission of India regarding 'inadequacies' in its direction for counting of votes on May 2; says no provision has been made for submission of negative RT-PCR test by polling officers and CAPF personnel

1:00 pm: The Chief Electoral Officer (CEO) said the arrangements are being made to have testing for everybody but he has no instructions as far as central forces are concerned: TMC MP Saugata Roy

12:45 pm: We've submitted a memorandum regarding counting process because they've (EC) introduced that all counting agents & candidates should be tested for #COVID19 but no such instructions are there for polling agents/central forces that's what we wanted to point out: TMC MP Saugata Roy

12:15 pm: Stray incidents of violence were reported on Thursday from several areas where voting is underway for the eighth and last phase of assembly elections in Bengal, but the overall polling process has been peaceful, EC officials said.

11:45 am: West Bengal elections: 37.80 per cent voter turnout recorded till 11 am in 35 assembly seats where polling is underway in final phase.

11:15 am: Election is the greatest festival in democracy, we both voted. COVID protocol being followed 100%. I'm very happy with the arrangements. Excellent work done by EC & CAPF. Democracy is powered only by your votes. Anyone who doesn't vote loses the right to grievance: WB Governor

11:00 am: West Bengal Governor Jagdeep Dhankhar and his wife Sudesh Dhankhar cast their votes at a polling booth in Chowringhee, Kolkata. 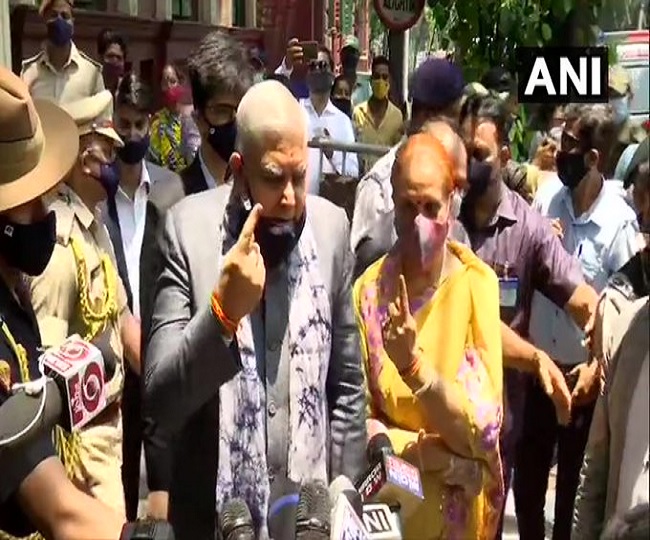 10:20 am: The results for the West Bengal Elections 2021 along with three other states and one UT will be declared on May 2, Sunday.

10:00 am: "The last phase of the 2021 West Bengal elections takes place today. In line with the COVID-19 protocols, I call upon people to cast their vote and enrich the festival of democracy," PM Modi tweeted.

9:15 am: West Bengal: A bomb was hurled near Mahajati Sadan Auditorium in north Kolkata today. Election Commission has sought details of the incident. Details awaited. 9:00 am: West Bengal: BJP candidate from Malda, Gopal Chandra Saha cast his vote at a polling booth in the constituency. He says, "There was a public rally on April 18 in Sahapur where I was shot & taken to hospital. It was done by either TMC or Congress goons. There is 'jungle raj' here"

8:45 am: West Bengal: Specially abled voters cast their votes at a polling booth in Bolpur, Birbhum. 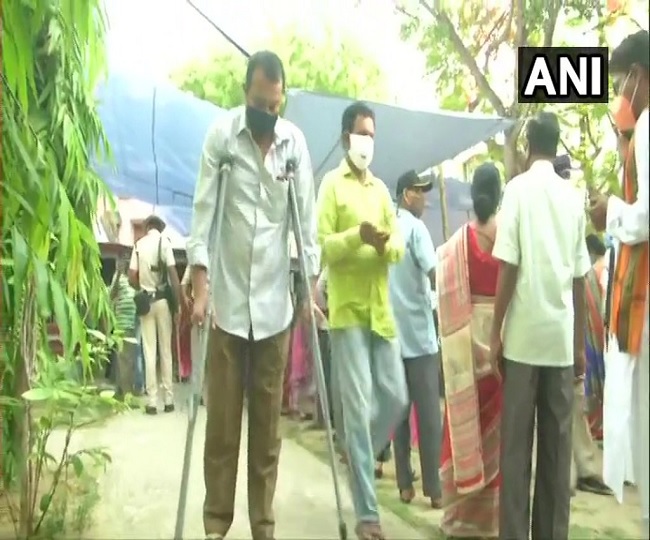 8:20 am: Voting began with a half an hour delay due to a glitch in the EVM, at polling booth number 188 in Birbhum. 7:45 am: Voting for the eighth and final phase of #WestBengalPolls is underway. Visuals from a polling booth in Murshidabad. 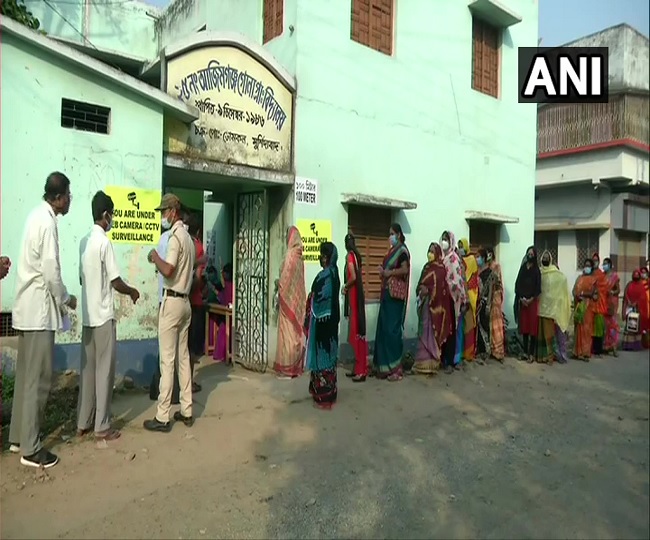 7:35 am: Actor and BJP leader Mithun Chakraborty cast his vote for the final phase of #WestBengalPolls, at a polling station in Kashipur-Belgachia, North Kolkata. He says, "I had never voted so peacefully ever before. I must congratulate all the security personnel." 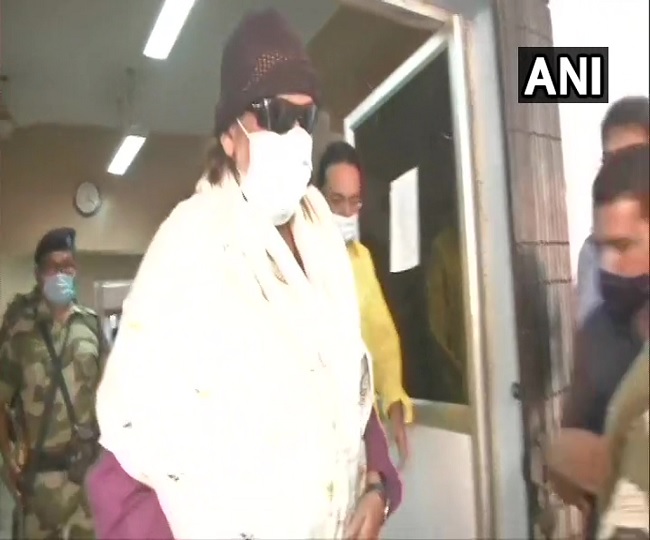 7:12 am: Voters form queues outside polling booth number 23/24 in Malda 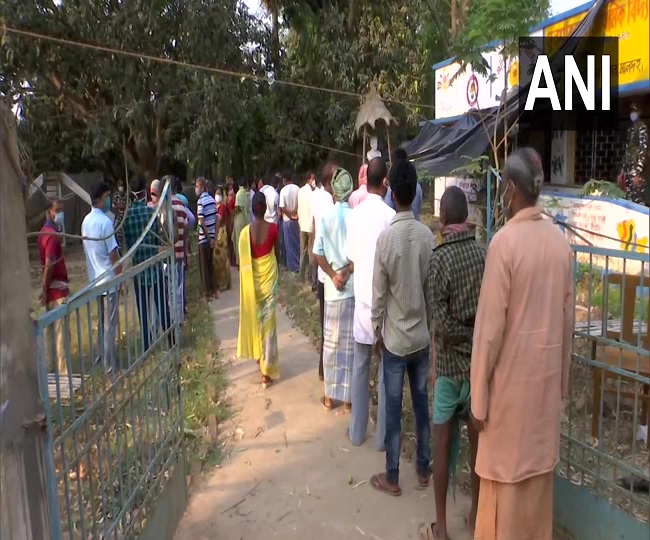 7:00 am: Voting for the eighth and final phase of #WestBengalElections2021 begins; 35 seats in the fray.

6:45 am: Voters queue up outside a polling booth in Shantiniketan, Bolpur; polling for the eighth and last phase of #WestBengalPolls will commence at 7 am today 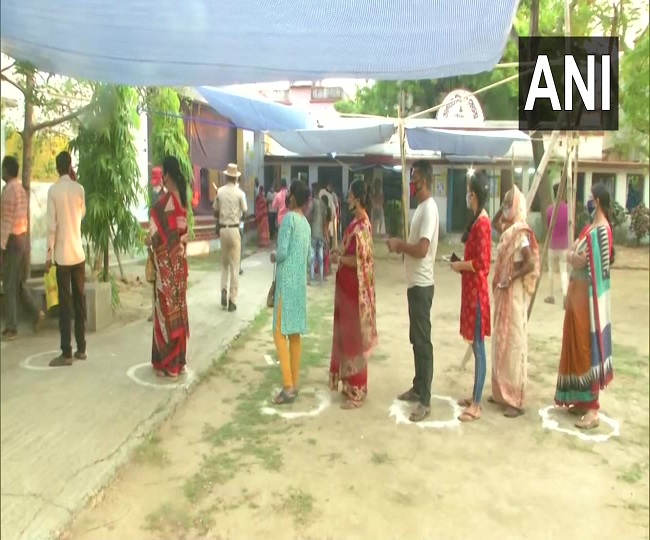 Ruling All India Trinamool Congress (AITC) and BJP are contesting on all 35 seats. Congress, the Left parties and the Indian Secular Front (ISF) have made a coalition and are contesting under the banner of Sanyukta Morcha. Out of the 35 seats in this round, Congress has 19 in its share, CPI(M) has 10, Revolutionary Socialist Party (RSP) has one, All India Forward Bloc (AIFB) has three and ISF has four seats. Bahujan Samaj Party (BSP) is also trying its luck and has fielded 24 candidates.