West Bengal By-Polls 2021: BJP's Priyanka Tibriwal will contest against TMC supremo Mamata Banerjee from Bhabanipur. Mamata needs to win this by-polls to continue as the Chief Minister of the state.

Kolkata | Jagran Politics Desk: The Bharatiya Janata Party (BJP) on Friday declared that party leader Priyanka Tibriwal will contest against West Bengal Chief Minister and Trinamool Congress (TMC) supremo Mamata Banerjee in the upcoming bypolls in Bhabanipur. Besides Tibriwal, the saffron party said that Milan Ghosh and Sujit Das will contest from Samserganj and Jangipur respectively in the upcoming by-polls in the state.

Tibriwal, who is a lawyer by profession, had contested the assembly elections in West Bengal from Entally but had lost to TMC's Swarna Kamal Saha. However, Tibriwal, who had joined the BJP in 2014, seems confident this time and believes that she will give a tough fight to Mamata in Bhabanipur.

"It is big? Not for me. I have already taken on Mamata Banerjee in court when I proved her wrong on the issue of post-poll violence in Bengal. This is the second time I will challenge her. I was born in Bhabanipur and know every lane, by-lane of this area; this is my 'nanibari'," she told News18 in an interview. 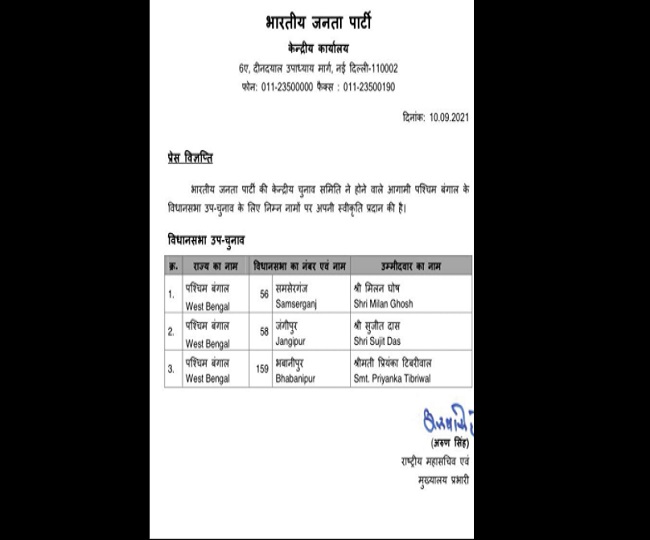 Mamata, who has accused the BJP of conspiring against her in the recently concluded assembly elections in West Bengal, seems confident of her victory this time. She has also alleged that the saffron party has called for an investigation on the post-polls violence in West Bengal because it "cannot fight her politically".

"They cannot fight politically, that's why they stopped Congress with the help of agencies. They are doing the same to me...They are calling for interrogation again, but in reality, the one whose name appeared in connection with Narada has not been called," she said earlier.

The assembly elections in West Bengal were conducted in April this year while the results were declared on May 2. The Mamata Banerjee-led TMC retained power in the state, winning 200 seats. The BJP, on the other hand, won just 77 seats.