West Bengal Polls 2021 LIVE: More than 75 lakh voters will decide the fate of 191 candidates in 30 constituencies, as eyes are set on Nandigram where Cm Mamata Banerjee is contesting against BJP candidate Suvendu Adhikari.

New Delhi | Jagran News Desk: Amid allegations of booth capturing by both main parties, the voter turnout for the West Bengal Assembly elections reached 80.43 per cent till 6 pm on Thursday. Purba Medinipur recorded the highest turnout among the other four districts, while the Moyna constituency has beaten other constituencies in terms of turnout. Voting for the second phase of the West Bengal Assembly election began at 7 am on Thursday.

Both the Trinamool Congress (TMC) and Bharatiya Janata Party (BJP) traded allegations of booth capturing and violence was reported in several areas. BJP's Mandal President of Debra constituency, Mohan Singh, was detained by the police, following which a ruckus ensued there. A total of 30 Assembly constituencies from the districts of South 24 Parganas, Bankura, Paschim Medinipur and Purba Medinipur are heading in to vote in the second phase. Out of the 171 candidates in the fray, 152 are men and the remaining are women. It means only 11 per cent of the candidates are women.

Here are the LIVE Updates from the second phase of West Bengal Assembly Elections 2021:

6:10 pm: 73.03% and 80.43% voter turnout recorded till 6 pm in the second phase of polling in Assam and West Bengal, respectively: Election Commission of India

5:45 pm: We have already lodged 63 complaints with Election Commission. I am not worried about Nandigram, but I am worried about democracy. I will win Nandigram with the blessings of 'Maa Maati Manush': West Bengal CM Mamata Banerjee

5:10 pm: West Bengal: BJP's Suvendu Adhikari who is contesting from Nandigram constituency arrives at a polling booth in Boyal where CM Mamata Banerjee had visited earlier. He says, "She doesn't have any support. She has lost it (poll)."

5:00 pm: The question of Mamata Banerjee (West Bengal CM) fighting from any other seat does not arise. She is winning Nandigram comfortably: TMC sources

4:40 pm: Didi, is there any truth in the rumour that you are going to file nomination from another constituency? First you went there (Nandigram), & people gave you an answer. If you go somewhere else, people of Bengal are ready: PM Narendra Modi in Uluberia.

4:26 pm: Sometimes Didi calls me a tourist, sometimes an outsider. Didi, you consider infiltrators as your own but call children of Bharat Mata as outsiders. Didi, stop distinguishing people & insulting the Constitution by labelling people as outsiders: PM Narendra Modi in Uluberia

4:17 pm; We will check all footage of the polling booth and take appropriate steps: West Bengal CM Mamata Banerjee when asked if any FIR will be done on allegations of booth rigging at Boyal polling booth where she visited.

4:15 pm: I am showing you 'V' for victory sign. I'm sorry Election Commission & Amit Shah, please control your goons who are heckling woman journalists in rallies. I can't reveal what I discussed with Observer&Gov, it's confidential.I haven't seen such a bad election:WB CM Mamata Banerjee

4:10 pm: People of Bengal have decided -- Didi must go. People of Nandigram have fulfilled this dream today. People can't wait any longer to save their future & identity. They are not just participating in polling, they are paving the way for renaissance in Bengal: PM Modi in Uluberia

4:05 pm: She's insulting voters. It has become her habit to insult people of Nandigram. She received injuries in an accident but levelled allegations. Governor's is a constitutional post, she can speak to him, no problem. EC conducts polls, not Governor or President: Suvendu Adhikari, BJP

4:00 pm: She alleges that polling agent was ousted from one booth. But said nothing when her people pelted stones on media & injured one. Her political ground is slipping away. What she did is illegal. She stopped polling for 2 hours & did drama. It's MCC violation: Suvendu Adhikari, BJP

3;45 pm; West Bengal: Rucks continues near a polling booth in Debra where locals had earlier alleged that people from outside are being called to create problems here. Locals now say, "We want Bharti didi to leave immediately" BJP's Bharti Ghosh & TMC's Humayun Kabir contesting from here

3;40 pm; There were 7 people in our car & all were attacked. Security was there but they were helpless. We were crying for our lives. We left the place & entered a house where minority women saved us & took care of us: Pritish Ranjan Kuar, BJP candidate from Keshpur

3;35 pm; I was going to a booth. There was a QRT of Police in front of our car & behind them was local media. When we reached there, there were 'Trinamooli gundas'. My security took us to car, where goons started hitting us with bricks & lathis: Pritish R Kuar, BJP candidate from Keshpur

3;20 pm; Polling parties escorted by ITBP to Sundarbans island during the second phase of polling in West Bengal: ITBP 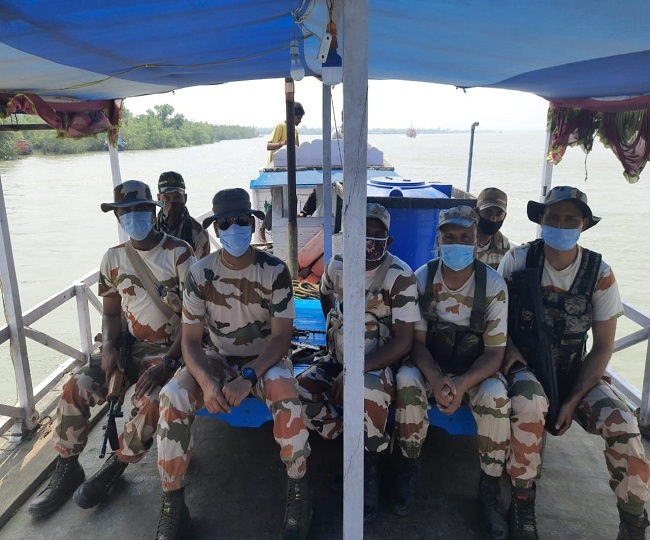 3:10 pm: Didi, if you want to appease anyone, you have every right to do so. You want to abuse me, keep abusing me. But I will not let you abuse people's devotion and the identity of Ram Krishna Paramhans, Chaitanya Mahaprabhu, and Swami Vivekananda: PM Modi in Jaynagar

3:05 pm: I would like to pay my tribute to Bengal's daughter Sova Majumder Ji. She was a representative of mothers & sisters of Bengal who were tortured by the people of TMC: PM Modi in Jayanagar.

2:55 pm; During the second phase of voting today, people are reaching polling booths in large numbers. Everywhere, there is only BJP. There is a BJP wave in Bengal: PM Modi in Jaynagar

2:45 pm: West Bengal CM Mamata Banerjee speaks to Governor Jagdeep Dhankhar over the phone at a polling booth in Nandigram. She says, "...They didn't allow the local people to cast their vote. From morning I am campaigning...Now I am appealing to you, please see..."

#WATCH: West Bengal CM Mamata Banerjee speaks to Governor Jagdeep Dhankhar over the phone at a polling booth in Nandigram. She says, "...They didn't allow the local people to cast their vote. From morning I am campaigning...Now I am appealing to you, please see..." pic.twitter.com/mjsNQx38BB

2:40 pm: People who are raising slogans are outsiders. They came from Bihar and UP, they are being protected by Central Forces: West Bengal CM Mamata Banerjee

2:30 pm: West Bengal CM Mamata Banerjee visits a polling booth in Nandigram. She is contesting against BJP's Suvendu Adhikari, from the constituency. 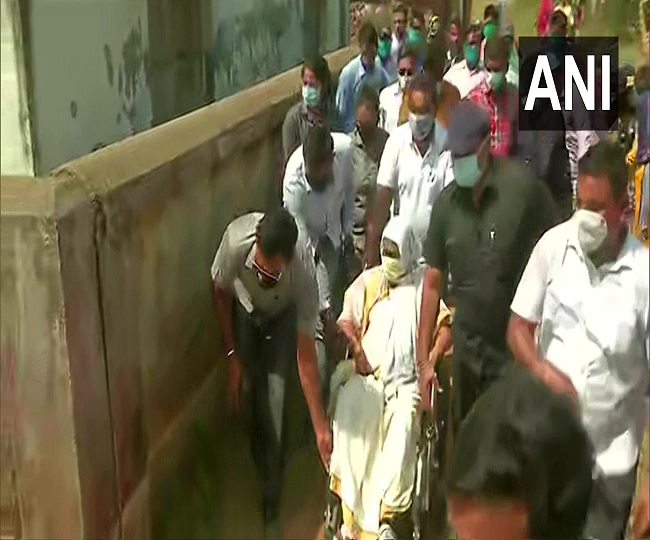 2:10 pm: Each stone hurled at innocent people & on BJP will be used to build exit path for anarchist regime of TMC. Didi, for too long you have mistaken Bengal's silence for weakness, your violence has only strengthened people's resolve for 'Ebar BJP': Union Minister Dharmendra Pradhan

1:50 pm: Amid allegations of booth capturing by both main parties, the voter turnout for the West Bengal Assembly elections reached 58.15 per cent till 1:29 pm on Thursday.

1:00 pm: West Bengal: A vehicle of media personnel attacked near booth number 170 in Kamalpur, Nandigram. "These are work of Pakistanis, 'Jay Bangla' is a slogan from Bangladesh. There are voters from a particular community at that booth who are doing this," says BJP's Suvendu Adhikari. 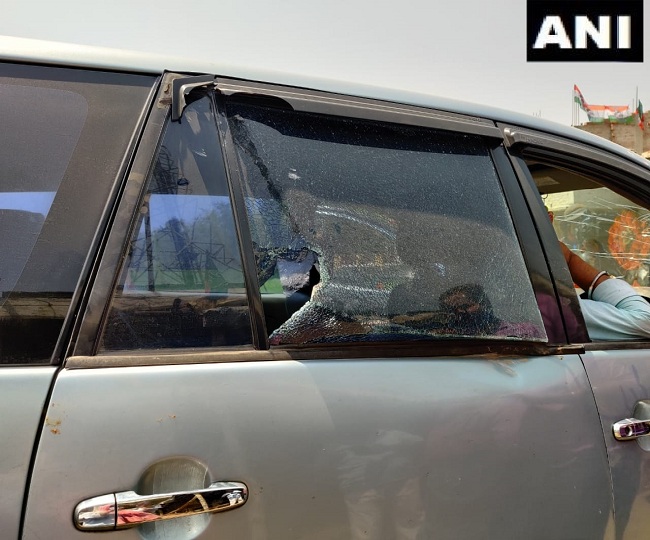 12:00 pm: A BJP worker was beaten up in Samsabad's Kanchan Nagar area today...One Amirul behind the death by hanging of a BJP worker in Maheshnagar, Nandigram. The police is taking action. The overall situation today is peaceful: BJP leader Suvendu Adhikari 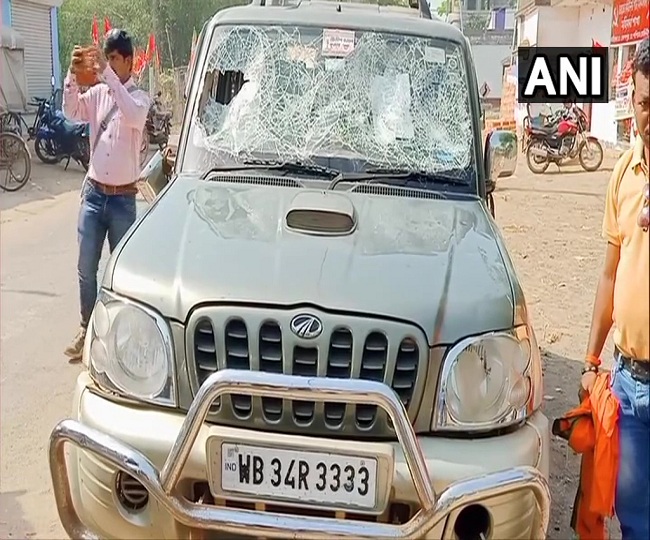 10:20 am: West Bengal: CPIM workers agitated at Ghatal today, alleged that they were being stopped by TMC workers as they were on their way to cast their vote. Later, security forces reached the spot and removed the road blockade. 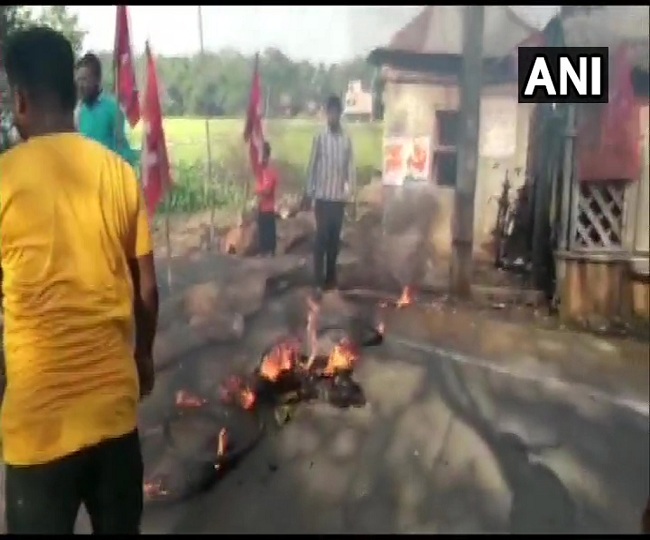 10:00 am: West Bengal: Police detain Mohan Singh, BJP's Mandal President of Debra. A ruckus erupted near a polling booth in the Debra assembly constituency today as polling is underway in the second phase of assembly elections

9:50 am: West Bengal: BJP polling agent at booth number 173 in Keshpur beaten up allegedly by TMC workers. The polling agent has been rushed to a hospital. BJP leader Tanmay Ghosh's car vandalised

9:15 am: 13.14% voter turnout recorded till 9 am in the second phase of polling West Bengal: Election Commission of India

9:00 am: West Bengal | The people here want development. We need a super speciality hospital and a women's college here. A large number of people have come out to cast their vote today: Hiron Chatterjee, actor and BJP candidate from Kharagpur Sadar assembly constituency,

8:25 am: West Bengal | In Nowpara, booth no. 22, Anchal-1, my polling agent has been surrounded by 150 TMC goons. He hasn't been allowed to enter the polling booth. In Barunia, voters being threatened and shown the TMC symbol: Bharti Ghosh, BJP candidate from Debra constituency

8;15 am; ITBP troops guard polling booths in East Midnapore district and help out senior citizens there, during the second phase of #WestBengalElections 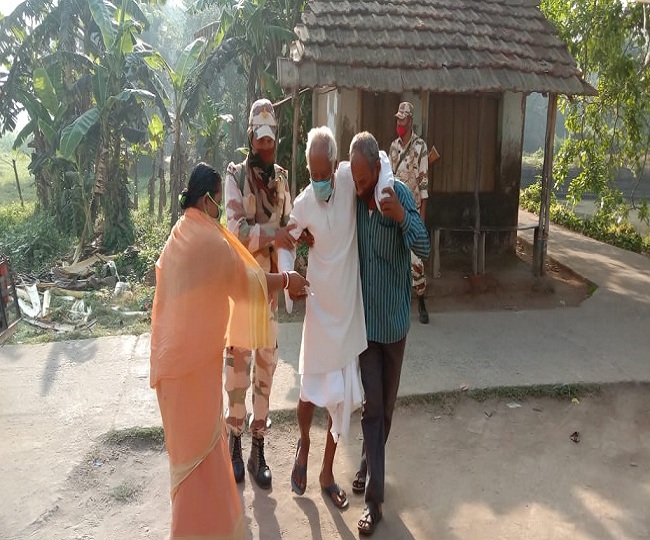 8:05 am: I appeal to people to come out in large numbers to cast their vote as the whole country is looking at Nandigram. People are waiting to see if development or politics of appeasement will win here: Bharatiya Janata Party's Nandigram candidate, Suvendu Adhikari

8:00 am: West Bengal: Bharatiya Janata Party's Nandigram candidate Suvendu Adhikari on his way to a polling booth in the assembly constituency. "Voting is underway, the situation is under control. People are hoping for development," he says. 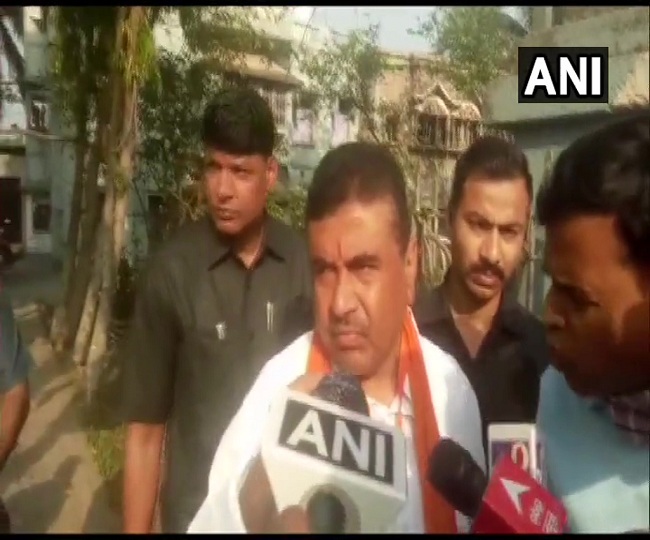 7:45 am: West Bengal: Voters queue outside polling booth number 110 in Nandigram, as the second phase of voting for Assembly elections gets underway 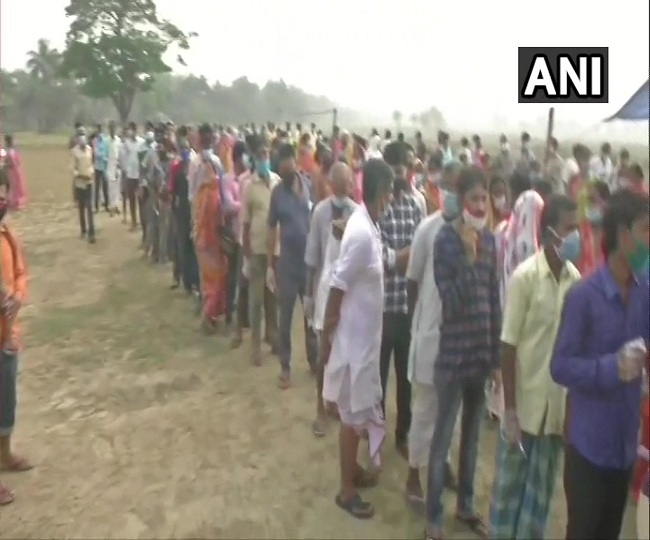 7:15 am: Polling begins at booth number 137 in Bankura, in the second phase of voting for Assembly elections 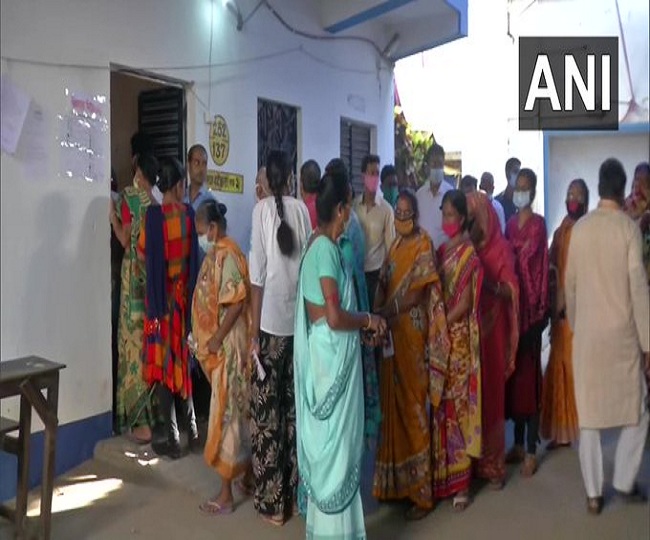 7:00 am: The second phase of voting for Assembly elections in West Bengal begin

6:50 am: Mock poll underway at a polling booth in Bankura, as West Bengal gears up for the second phase of #AssemblyElections2021 today 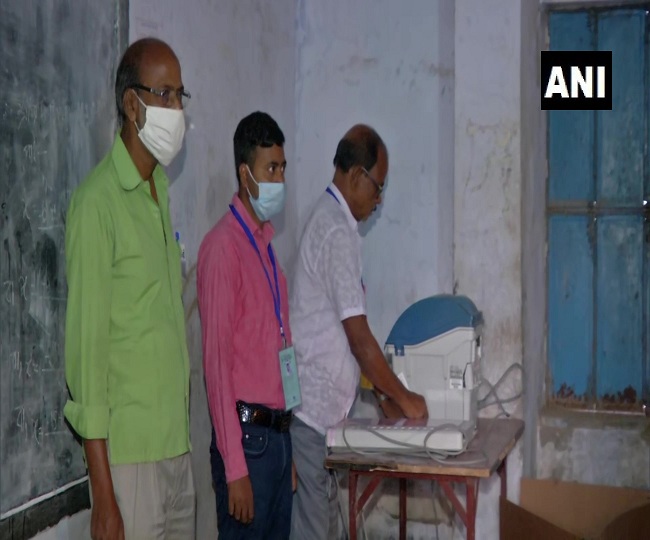 6:30 am: West Bengal to vote today in the second phase of #AssemblyElections2021. Visuals from polling station 110 at SN Primary School in Reapara, Nandigram where preparation ahead of voting is underway 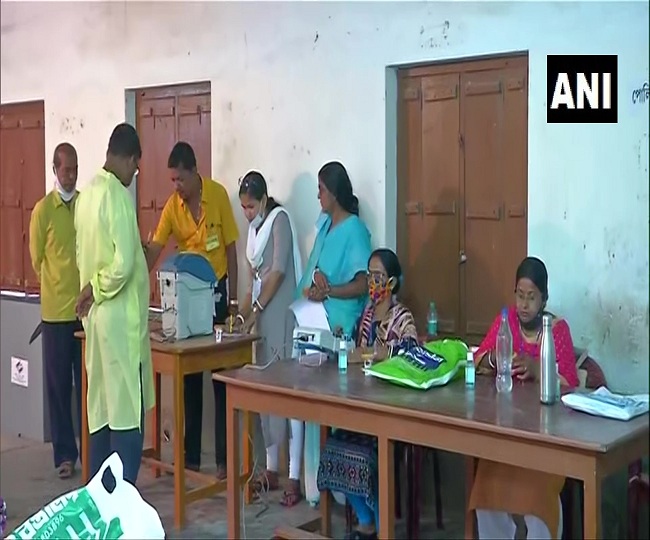 6:15 am: West Bengal: Preparations underway at polling station 76 in Nandigram constituency, ahead of voting for the second phase of #WestBengalElections2021 today 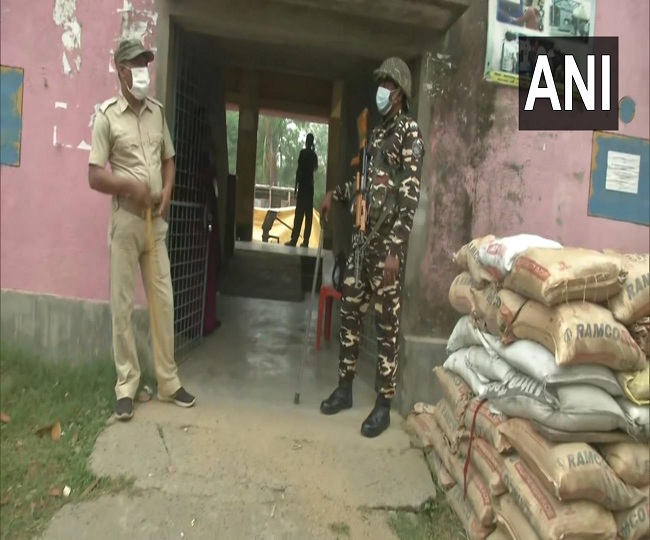 6:00 am: West Bengal: Preparations underway at a polling booth in South 24 Parganas, ahead of voting for the second phase of #WestBengalElections2021 today