The list of star campaigners, which includes 40 high-profile names, highlights the party's ambitions of setting its foot in the turf of Mamata Banerjee-led Trinamool Congress. 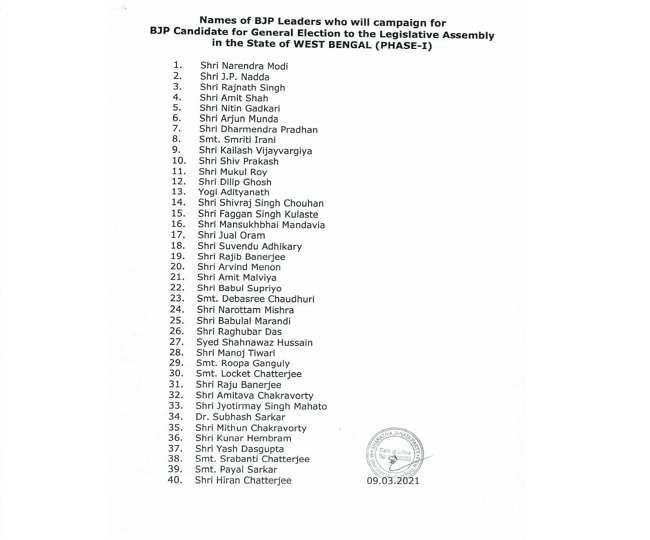 Mithun, in a major ideological shift, joined the BJP last week and said that said he had committed a mistake by joining the Trinamool Congress which had sent him to the Rajya Sabha in 2014.

Chakraborty, who earlier maintained close ties with Mamata Banerjee, was nominated to the Rajya Sabha by the TMC in 2014. He, however, quit the Upper House in 2016 citing health reasons, after his name surfaced in the Saradha ponzi scam.

West Bengal will go to polls in eight phases between March 27 and April 29 while the counting of votes will be held on May 2, along with four other states - Kerala, Assam, Tamil Nadu and Puducherry. The eight-phased polling will be held on March 27, April 1, April 6, April 10, April 17, April 22, April 26 and April 29, making it the longest ever polls in the state.

The polls are being considered as a litmus test for both the BJP and Mamata Banerjee who are leaving no stone unturned in their bid to defeat the opponent. However, Mamata has suffered a series of setbacks ahead of the polls with a number of party members, including several ministers, switching sides with the BJP. The chief minister has said that those jumping ship would be taught a lesson by the electorate in the polls.

Mamata filed her nomination from Nandigram on Tuesday where she faces her former close aide-turned-bete noire Suvendu Adhikari of the BJP.