West Bengal Assembly Elections 2021: A war of words began between the BJP and TMC over the Cooch Behar incident with Chief Minister Mamata Banerjee demanding the resignation of Union Home Minister Amit Shah.

Kolkata | Jagran Politics Desk: Violence erupted in West Bengal's Cooch Behar on Saturday with the beginning of the fourth phase of polling. At least four people were killed after the CISF allegedly opened fire at a mob that tried to snatch the weapons of the central forces deployed there. Following the incident, the election commission ordered a probe and suspended the polling at a booth.

Meanwhile, a war of words began between the BJP and TMC over the Cooch Behar incident with Chief Minister Mamata Banerjee demanding the resignation of Union Home Minister Amit Shah. On the other hand, Prime Minister Narendra Modi, who addressed two separate rallies in Bengal on Saturday, accused the TMC of the violence and said that people of the state have rejected Banerjee's way of working.

Here are the highlights of the day.

6:25 pm: One daughter of Bengal is attacking the other. If I broke the glass of my car myself then who broke the other two press vehicles? You all (media) were present there. Did press themselves break their own vehicles?, says BJP candidate from Chunchura Locket Chatterjee.

It was PM's responsibility to meet the family members of the deceased. Isn't he ashamed? He is giving clean chit. It's a matter of shame. I condemn his attitude, she added.

5:18 pm: According to voter turnout app of the election commission, 73.23 per cent turnout has been recorded till 5.18 pm.

5:17 pm: Home Minister Amit Shah is completely responsible for today's incident and he himself is the conspirator. I don't blame central forces because they work under Home Minister's order, says Mamata Banerjee.

I believe, this incident (firing incident in Cooch Behar) is pre-planned. I will order an investigation into the matter, she added.

4:41 pm: The reason behind Didi's anger is not only BJP and Modi but the people whose trust Didi has broken... The minority community that Didi persuaded are at distress so she needs to appeal to them continuously: PM Modi

4:28 pm: Didi abuses EC, CAPF, EVM.. to the extent, that Didi is abusing her own party's polling agents now. She is so desperate that she is defaming Bengal's voters. Didi, o Didi! People of Bengal don't expect you to have sensitivity any more: PM Modi

4:27 pm: This election of Bengal is not only being fought by BJP, people of Bengal are also fighting this election, says PM Modi.

4:14 pm: After a wait for decades, the 'mahayagya' of 'ashol poribortan' has started in Bengal. This 'mahayagya' will teach a lesson to appeasers, says PM Modi in Krishnanagar. 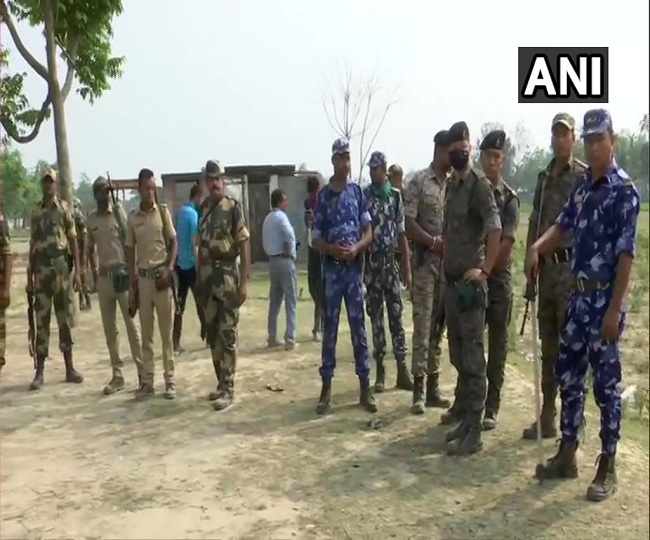 2;45 pm; Our party workers will hold protests in every block and ward of West Bengal over the firing in Cooch Behar: Saugata Roy, TMC MP

2;22 pm; The firing took place because common people were resisting the effort by BJP hooligans to disrupt the voting. They are being encouraged by Central Armed Police Force & we feel this is a conspiracy headed by Home Minister, we are demanding his resignation: Saugata Roy, TMC MP 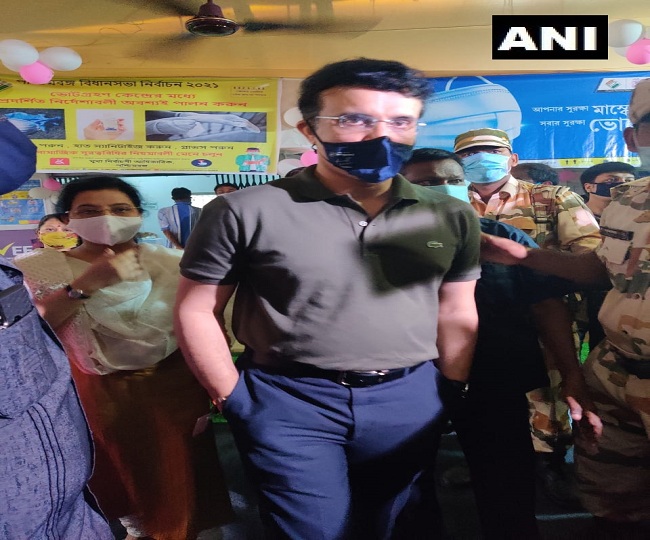 2;00 pm; Why did the Central Armed Police Forces fire? Where do they get this audacity of firing on common voters? That is the main question. This is a part of a conspiracy & we do not think that the PM is out of this conspiracy. This is an effort to intimidate voters: Saugata Roy, TMC MP

1;50 pm; Regarding recent incident being reported in media about killing of 4 civilians outside booth 126, Jorpatki in Sitalkuchi Assembly Constituency, Cooch Behar, it's clarified that CRPF component was neither deployed at the said booth nor involved in the incident in any way: CRPF

1;42 pm; 52.89% voter turnout recorded till 1:37 pm. Voting for the fourth phase of the State's Assembly elections is underway today.

1;20 pm; The thinking of Didi & TMC leaders is coming out in the open. A video is going viral on social media where a leader close to Didi can be seen insulting members of SC community. She had said that SC community in Bengal acts like beggars. Didi, such arrogance! Such thinking!: PM

1;16 pm; Commission orders adjourning the poll in Polling Station 126 of Sitalkurchi Assembly Constituency, Cooch Behar based on an interim report from Special Observers. Detailed reports sought from them and Chief Electoral Officer by 5 pm today: EC

1;12 pm; CRPF have killed voters standing in the queue, where do they get so much of audacity? BJP knows that they have lost so they are killing voters & workers: West Bengal CM Mamata Banerjee

1;08 pm; CRPF has shot dead 4 people in Sitalkuchi (Cooch Behar) today. There was another death in the morning. CRPF is not my enemy but there's a conspiracy going around under the instruction of Home Minister & today's incident is a proof: West Bengal CM Mamata Banerjee

1;00 pm; I would like to tell Didi, TMC & their goons clearly that their ways will not be allowed to work in Bengal. I urge the Election Commission to take strict action against the accused of the incident in Cooch Behar: PM Narendra Modi in Siliguri

12;45 pm; What happened in Cooch Behar is very saddening. My sympathies are with the families of those who died, I condole their demise. Didi & her goons are perturbed, seeing the people's support for BJP. She has stooped to this level as she can see her chair slipping away: PM in Siliguri

12;35 pm; West Bengal CM Mamata Banerjee replies to Election Commission notice to her on her remarks on CAPFs. She states, "There has been no effort to incite/influence the electorate against CAPFs. It is clear I haven't violated Model Code of Conduct."

12;25 pm; Election Commission of India announces re-polling on 20th April at 4 polling stations in Ratabari, Sonai and Haflong, Assembly constituencies in Assam. The Commission declares void, the votes cast at these stations on April 1st.

12;15 pm; Four people killed and four injured in incidents of firing in Cooch Behar during the fourth phase of #WestBengalElections2021 today. TMC alleges that the firing was done by Central Forces. Visuals from Cooch Behar. 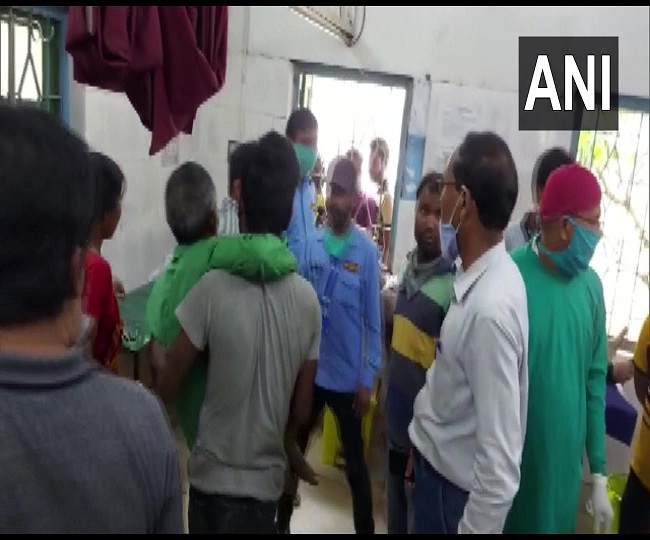 11;50 am; Indian Secular Front chairman and candidate from Bhangar in South 24 Parganas district, Naushad Siddiqui and BJP candidate from the constituency, Soumi Hati greet each other. Visuals from near Hatisala Sarojini High Madrasah (H.S.) in the area.

#WATCH | Indian Secular Front chairman and candidate from Bhangar in South 24 Parganas district, Naushad Siddiqui and BJP candidate from the constituency, Soumi Hati greet each other. Visuals from near Hatisala Sarojini High Madrasah (H.S.) in the area.#WestBengalElections2021 pic.twitter.com/mlmU1GRRQE

11:10 am: ITBP personnel, deployed on election duty, at polling booths in Rishra of Hooghly district help an elderly woman as she arrives to cast her vote for the fourth phase of #WestBengalPolls 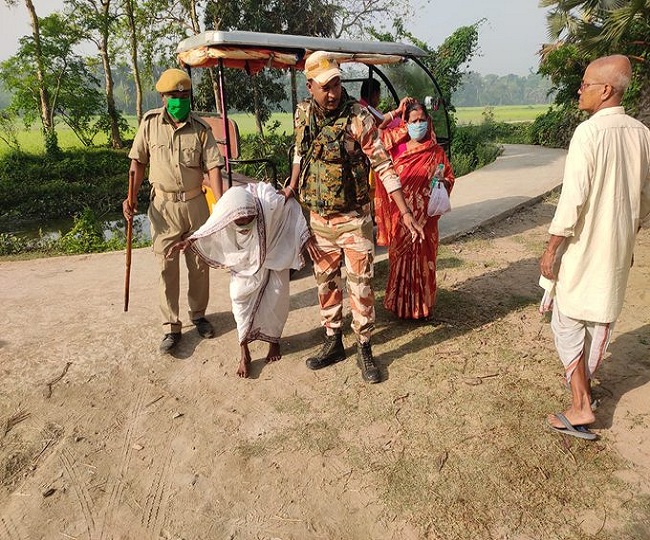 10:45 am: West Bengal: BJP leader Locket Chatterjee speaks to an Election Commission official over phone, says that she was attacked by locals at polling booth no.66 in Hooghly. She also says that journalists have been attacked too and demands that additional forces be sent here.

10:30 am: BJP leader Locket Chatterjee's car attacked by locals in Hoogly during the fourth phase of West Bengal assembly elections 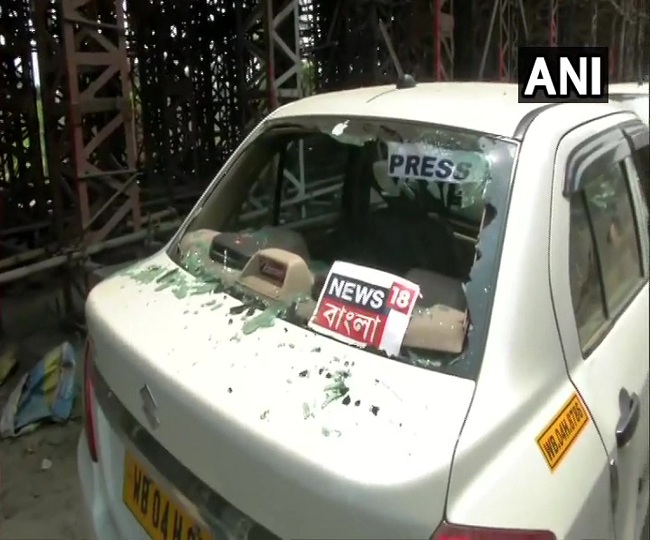 09:40 am: A voter killed while standing in queue at booth in Sitalkuchi of Cooch Behar district, allegedly in firing. Deceased identified as Ananda Burman (18), a first-time voter; still unclear who fired the shot.

09:37 am: Prashant Kishor also knows that Modi Ji is the best and a 'sonar Bangla' will be made under his leadership. But to fool the people he got associated with TMC: BJP leader Locket Chatterjee, in Hoogly

09:35 am: Glad BJP's taking my clubhouse chat more seriously than words of its leaders. On selective use of part of conversation, urge them to release full conversation: Prashant Kishor to ANI on leaked audio where he's saying "Modi, Mamata equally popular" among Bengal poll-related things

08:44 am: The biggest challenge is to remove Mamata Didi and TMC from West Bengal. Aroop Biswas (TMC candidate from the constituency) has been the right hand of all her works. So is a challenge to change the atmosphere of terror here: Babul Supriyo

08:42 am: Prime Minister Narendra Modi urged the voters in the fourth phase of the West Bengal election to cast their votes in record numbers. "As the 4th phase of the West Bengal elections begin, urging the people voting today to do so in record numbers. I would especially request the youth and women to vote in large numbers," he said in a tweet soon after the polling began.

8:40 am: A security personnel helps a woman voter  get to a polling station in Alipurduar, as the fourth phase of Assembly elections are underway. 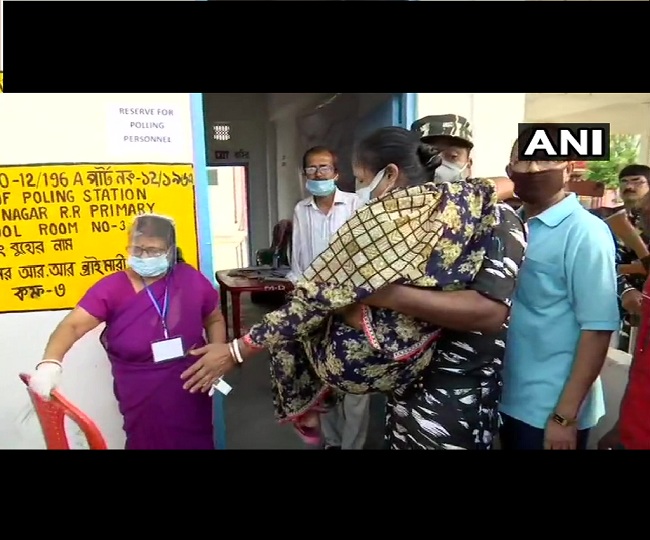 Tight security arrangements have been made to ensure peaceful voting, with 789 companies of central armed police forces (CAPF) being deployed to guard 15,940 polling stations. At least 187 companies of CAPF, the highest deployment of forces among poll-bound districts in the phase, are in Cooch Behar, which has witnessed sporadic incidents of violence, including an attack on BJP state president Dilip Ghosh, in the run-up to the elections.

State police forces have also been deployed at strategic locations to aid the central forces. Elections for the 294 assembly seats in West Bengal are being held in eight phases. The votes will be counted on May 2.