The fifth phase of polling in West Bengal ended on Saturday with a voter turnout of 78.36 per cent, according to the voter turnout app of the election commission.

New Delhi | Jagran News Desk: The fifth phase of polling in West Bengal ended on Saturday with a voter turnout of 78.36 per cent, according to the voter turnout app of the election commission. Polling was held in 45 seats in North 24 Parganas, Purba Bardhaman and Nadia in south Bengal, and Jalpaiguri, Darjeeling and Kalimpong districts in the north.

The security personnel are maintaining a tight vigil and they have addressed a few incidents that were reported, an official at the office of the Chief Electoral Officer (CEO) said. In the Shantinagar area of Bidhanagar, a clash broke out between TMC and BJP supporters with both sides accusing each other of stopping the voters from going to the polling booths. Bricks and stones were hurled, injuring eight people, officials said.

A huge contingent of the central force was rushed to the spot to control the situation, they said. TMC MLA Sujit Bose and BJP candidate Sabyasachi Dutta visited the spot to take stock of the situation. In Siliguri, a scuffle broke out between TMC and CPI (M) supporters outside a polling booth. In Santipur in the Nadia district, the TMC alleged that personnel of the central forces were asking voters to go back, a charge rubbished by the authorities.

7:46 pm: The fifth phase of polling in West Bengal ended on Saturday with a voter turnout of 78.36 per cent, according to the voter turnout app of the election commission.

5:00 pm: West Bengal elections: 78.36 per cent voter turnout recorded till 5 pm in 45 seats where polling is underway for
fifth phase.

4:45 pm:  A day after a purported audio tape -in which she is heard proposing a rally with the bodies of Cooch Behar firing victims- surfaced, West Bengal Chief Minister Mamata Banerjee on Saturday alleged that her phone is being tapped and said she will order a CID probe into it.

4:30 pm: Mamata Banerjee's day is not complete without abusing me: Prime Minister Modi at Gangarampur rally in West Bengal.

3:50 pm: West Bengal: TMC MP Mimi Chakraborty casts her vote at a polling booth in Jalpaiguri, in the fifth phase of the State's Assembly election 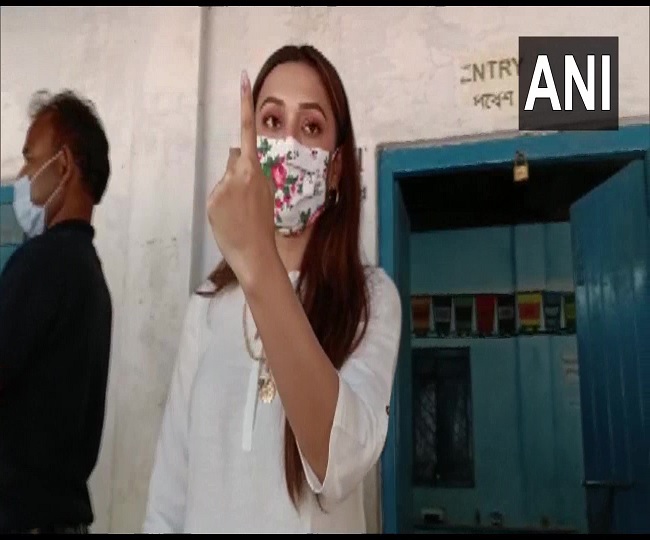 3:15 pm: 62.40% voter turnout recorded till 3:15 pm. Voting for the fifth phase of the State's Assembly elections is underway today.

2:50 pm: West Bengal | TMC goons stopped me here at Nayapatti. They are also stopping the voters even as polling is underway: BJP candidate from Bidhan Nagar, Sabyasachi Dutta, in the assembly constituency

2:40 pm: Her hatred for the name of Lord Ram has increased so much that she changes the name 'Ramdhenu' to 'Rongdhenu'...As a result of her appeasement politics this large region, including Dinajpur, lags behind in development: PM Modi in Gangarampur, Dakshin Dinajpur

2:25 pm: Gangarampur has 2 holy names, that define our culture, in its own name...But it seems Didi hates names of both lord Ram and river Ganga. She abuses Indians living in areas near river Ganga. She insults their beliefs, food, language & clothes: PM in Gangarampur

2:05 pm: Assam | All our candidates were present in the meeting held today on preparations for counting day. We all will be staying together for 2-3 days, we are like a family: AICC In-Charge of Assam, Jitendra S Alwar, in Guwahati

1:45 pm: 54.67% voter turnout recorded till 1:34 pm. Voting for the fifth phase of the State's Assembly elections is underway today.

1:30 pm: Didi, how far will you go for vote bank? The truth is that Didi thought of her political benefit through those deaths. Doing politics on corpses is an old habit of Didi: PM Modi in Asansol earlier today

1:25 pm: You might have listened to an audiotape over what happened in Cooch Behar. After the death of 5 people, Didi is doing politics. In this audiotape, Cooch Behar TMC leader is being told to hold a rally with the bodies of the 5 deceased: PM in Asansol earlier today

12:45 pm: In last 10 yrs, Didi betrayed you in the name of development. She stood like a wall in front of development. Centre offered facility of free healthcare up to Rs 5 Lakh, she became a wall. Centre formed laws to help refugees, she opposed this too: PM in Asansol

12:15 pm: From bicycle to rail, paper to steel, aluminium to glass - people from all over India come here to work in such factories. In a way, Asansol is mini India. People from all corners of India are seen here. But the misgovernance of Bengal govts affected Asansol: PM

12:00 pm: It is requested that the Commission may examine the issue immediately and constitute a Special Investigation Team (SIT) for carrying out a detailed investigation in this regard: BJP writes to West Bengal Chief Electoral Officer

11:50 am: As far as the authenticity of the tape is concerned, Derek O'Brien and Sukhendu Sekhar Roy confirmed it in a conversation with the media. The only goal of the tape was to create further polarisation: Shishir Bajoria, BJP after meeting Election Commission in Kolkata

11:15 am: Two of our people were injured in stone-pelting by BJP supporters at booth numbers 265 & 272. We have informed the election observer and police. The situation is normal now: TMC's Sujit Bose, Bidhan Nagar 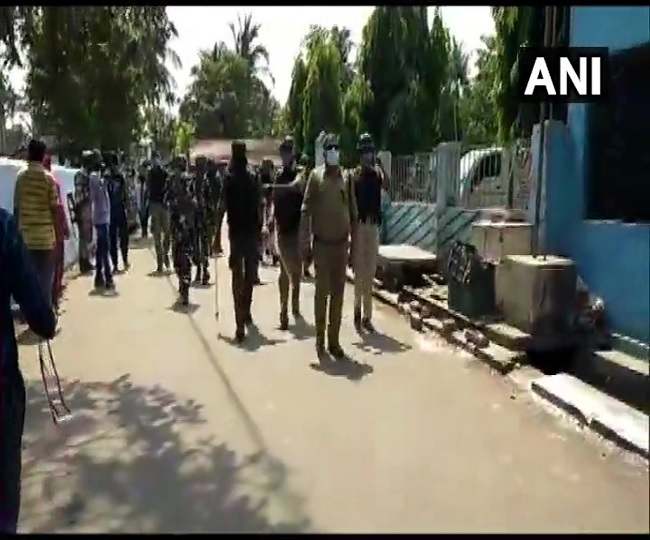 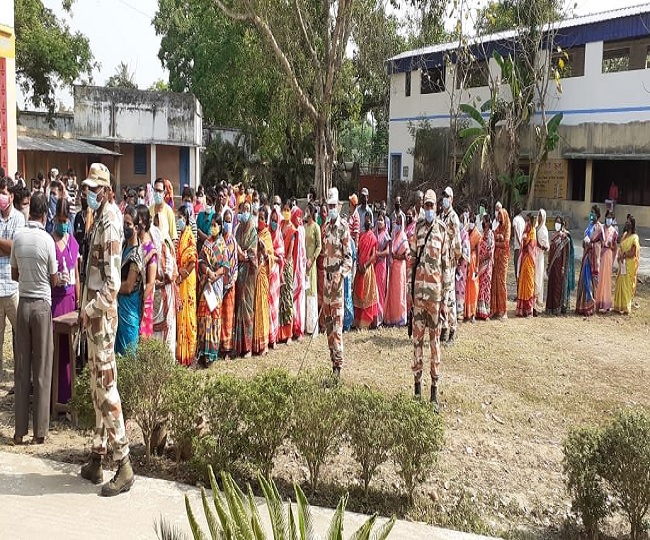 10:35 am: I supported BJP for 15 years but what did it do for my community? Modi had assured us and made a commitment, it has been 6.5-7 years now but it is yet to be completed: GJM (Gorkhaland Janmukti Morcha) leaders Bimal Gurung

10:25 am: They (BJP) don't have people's support in Bengal. They don't have much influence on ground zero. How can they form the government? Politics is not possible through violence, vandalism, shooting. Politics should be simple: GJM (Gorkhaland Janmukti Morcha) leaders Bimal Gurung

10:15 am: West Bengal: Election Commission has sought a report over the sudden death of a BJP polling agent at booth number 107 in Kamarhati today "His name is Abhijeet Samant. Nobody helped him, there is no facility for treatment here," says brother of the deceased BJP polling agent

9:45 am: I've full authority to enter a polling booth. They (Central forces) even searched my pocket in which I was carrying pictures of my goddess.This is a democratic country. I'm going to meet Chief Election Commissioner: TMC leader &candidate Madan Mitra,at booth no. 165/166 Kamarhati 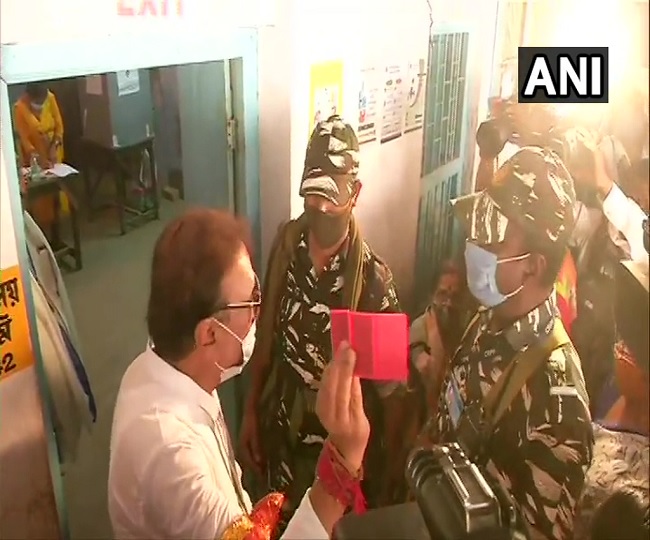 9:00 am: West Bengal Minister and TMC candidate from Bidhannagar, Sujit Bose visits polling booth in East Calcutta Girls College in the assembly constituency, as polling in the fifth phase of assembly elections is underway 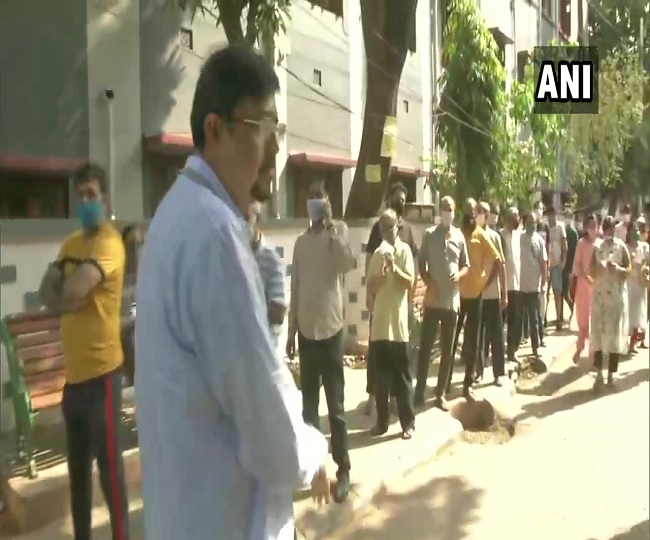 8:40 am:  Prime Minister Narendra Modi on Saturday urged voters in the fifth phase of the West Bengal assembly elections to vote in large numbers. In tweets, he also noted that bypolls to many assembly and Lok Sabha seats were taking place on Saturday, and asked people to vote in record numbers and strengthen the festival of democracy.

8:25 am: TMC leader Madan Mitra casts his vote at a polling booth in Kamarhati 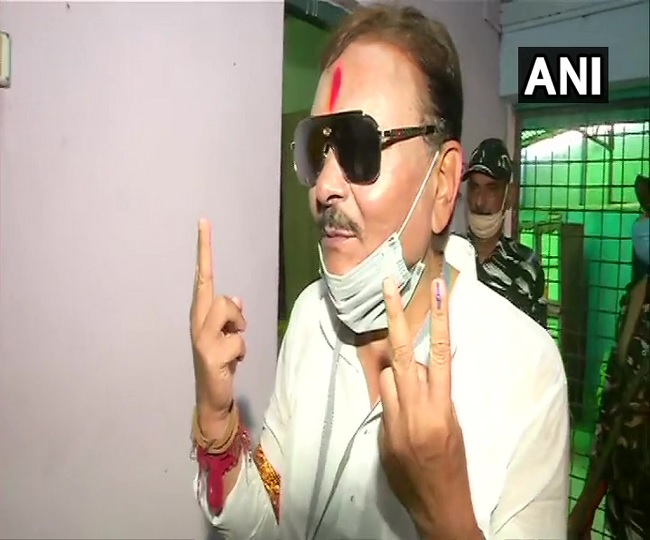 8:15 am: Voters queue up outside Hiralal Mazumder Memorial College for Women - designated as a polling booth - in Dakshineswar, Kolkata. Voting for the fifth phase of #WestBengalElections2021 is underway today. 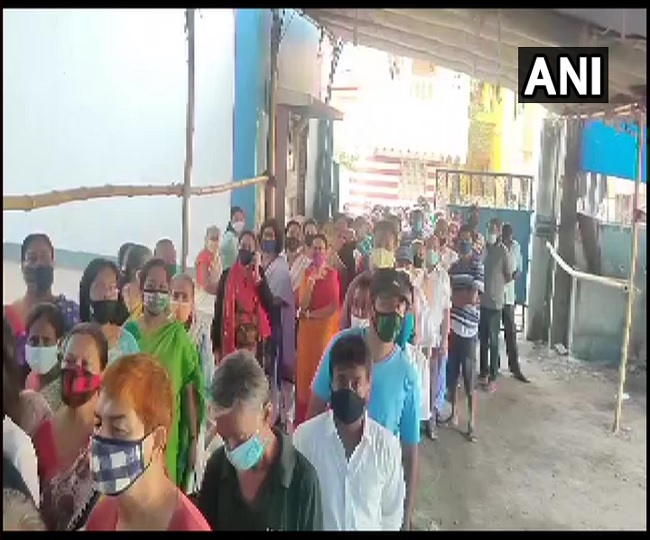 7:45 am: It looks like 'khela shesh' so far. We're keeping a watch. As far as the Hills & our problems are concerned, we want that this government be changed; we want BJP govt, we want justice: Gorkha National Liberation Front (GNLF) president Mann Ghising, in Darjeeling

7:30 am: Voters queue outside polling booth 263 in Bardhaman South, in Phase 5 of the West Bengal assembly elections 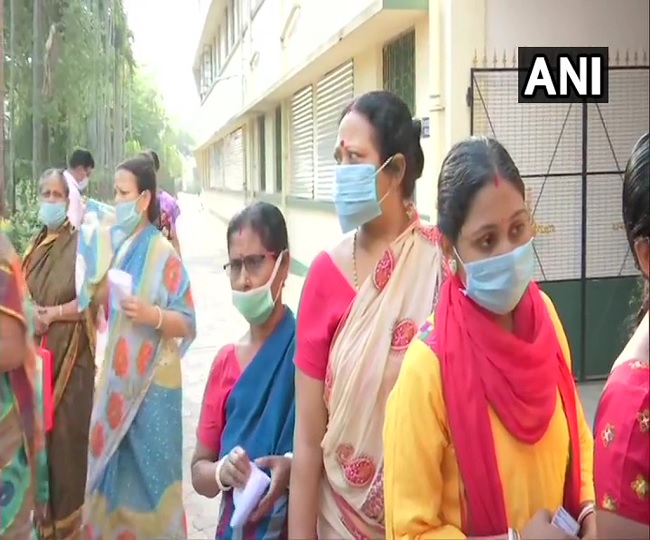 7:20 am: Polling underway at Booth number 263 in Darjeeling during the fifth phase of #WestBengalElections2021 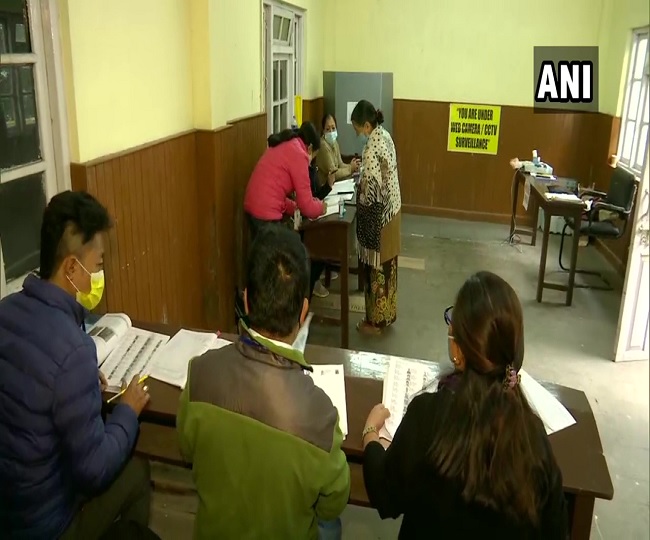 7:10 am: Voters queue up to cast their votes as 5th phase of polling begins; visuals from Kamarhati, West Bengal 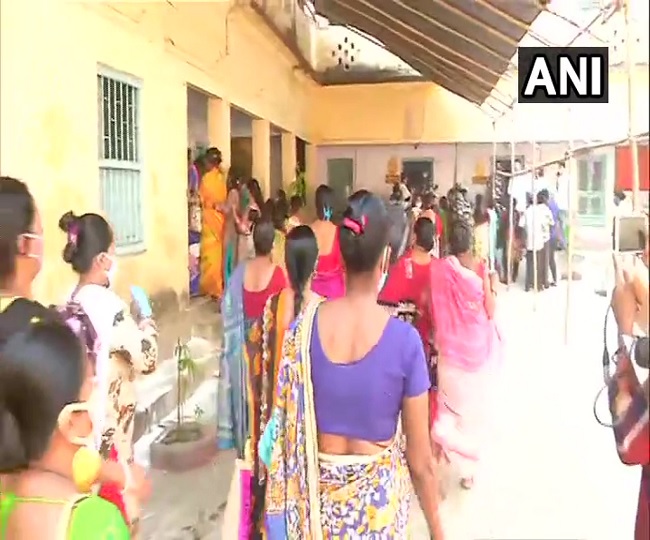 7:00 am: #WestBengalElection2021 | Polling for the fifth phase of election in West Bengal begins

6:50 am: Ahead of phase 5 polling, voters queue up outside a polling booth in Kamarhati, West Bengal 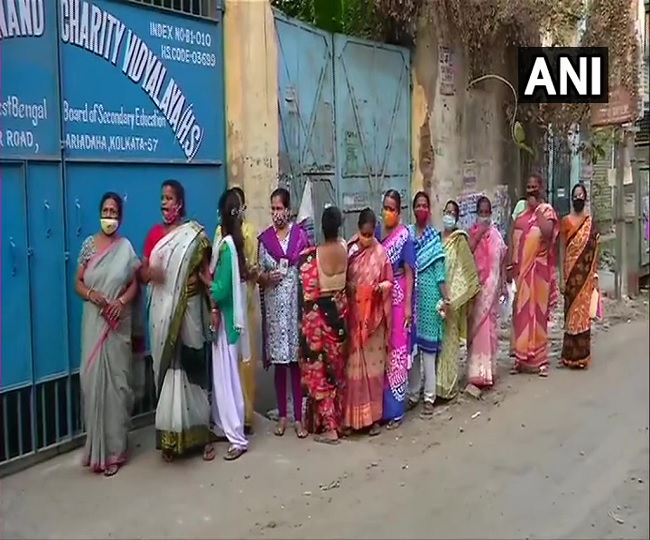 6:42 am: Ahead of the fifth phase of polling, visuals from a polling booth in Bidhannagar, West Bengal 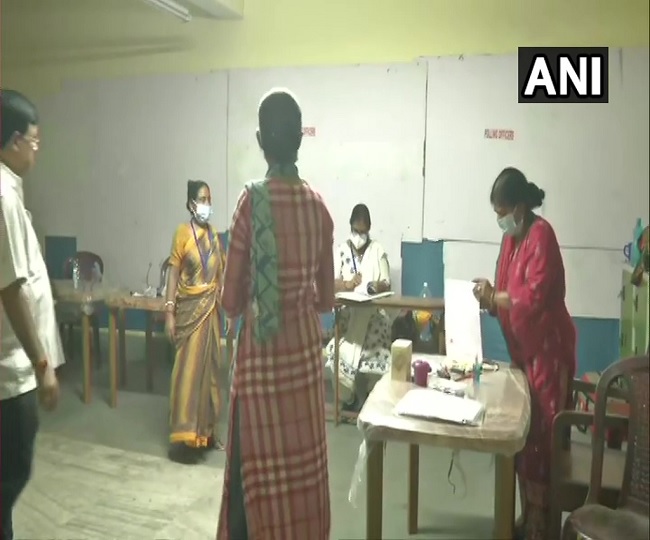 6:30 am: Bengal phase V polls: Another round of 'Khela' begins today amid COVID-19 scare