New Delhi | Jagran News Desk: The voting for the much awaited elections for the 19 Rajya Sabha seats started today at 9 am, with the intensified contest in Gujarat, Madhya Pradesh and Rajasthan promising to be a neck to neck battle between the BJP and the Congress. The counting of votes for all the 19 seats will be held on the evening of June 19 itself, the Election Commission said.

Voting for 18 seats were deferred due to the coronavirus pandemic. Later the Election Commission announced polls for fours seats in Karnataka and one seat each in Mizoram and Arunachal Pradesh. Of the 19 seats where polling will be held, four each are from Andhra Pradesh and Gujarat, three each from Madhya Pradesh and Rajasthan, two from Jharkhand, and one each from Manipur, Mizoram and Meghalaya.

Legislators vote to elect candidates for the Upper House of Parliament. The Election Commission (EC) has made elaborate arrangements for the voting keeping in mind the coronavirus pandemic. Every voter (MLA) will be screened for body temperature and will have use mask and adhere to social distancing norms. Legislators having a fever or showing other symptoms will be kept in a separate waiting room.

Here are the Highlights from Rajya Sabha Elections:

6:00 pm: I returned to India y'day & before coming here I took a COVID test. As an MLA, it was my duty to vote & I cast my vote in a separate enclosure. Today, I took a #COVID19 test, its result is negative. Opposition has no issue so they're making this an issue: Cong MLA Wajib Ali

5:40 pm: The first preference voting for four Rajya Sabha seats in Gujarat ended on Friday afternoon. After the voting, the victory of three candidates -- two of the BJP and one from the Congress -- is being considered as confirmed.

5:30 pm: Voting for three vacant Rajya Sabha seats in Madhya Pradesh concluded on Friday afternoon after all the 206 MLAs, including a Congress legislator who has tested COVID-19 positive, cast their votes. Voting began at 9 am in the state assembly complex here and ended around 1.15 pm, an assembly official said.

5:15 pm: Voting for three Rajya Sabha seats in as many northeast states underwent peacefully on Friday, with several precautionary measures in place in view of the COVID-19 pandemic.

4:50 pm: Of the 172 MLAs eligible to vote in the Rajya Sabha elections in Gujarat on Friday, 170 legislators cast their votes, while two others from the Bharatiya Tribal Party (BTP) stayed away from the process after they demanded a written assurance about the welfare of tribals, migrants and Dalits.

4:30 pm: The BJP on Friday raised objection over Congress MLA Wajib Ali, who has recently returned from abroad, casting his vote in the Rajya Sabha polls, alleging that he violated the quarantine norms.

3:40 pm: The BTP has refused to vote in Gujarat. The BJP and Congress have repeatedly tried to convince them, reports News18.

3:30 pm: With precautionary measures in place owing to the COVID-19 pandemic, polling was underway for two Rajya Sabha seats in Jharkhand, where three candidates are in the fray

2:30 pm: The NDA currently has 90 members which includes 75 MPs from the BJP. The Congress has 39 MPs and the opposition bloc together has 69. Parties that are not part of the NDA, but are friendly to the BJP, have 27 MPs.

2:00 pm: The Bharatiya Janata Party (BJP) is the single largest party in the Rajya Sabha with 75 members out of the current strength of 224, and it is expecting its numbers to go up to 86. 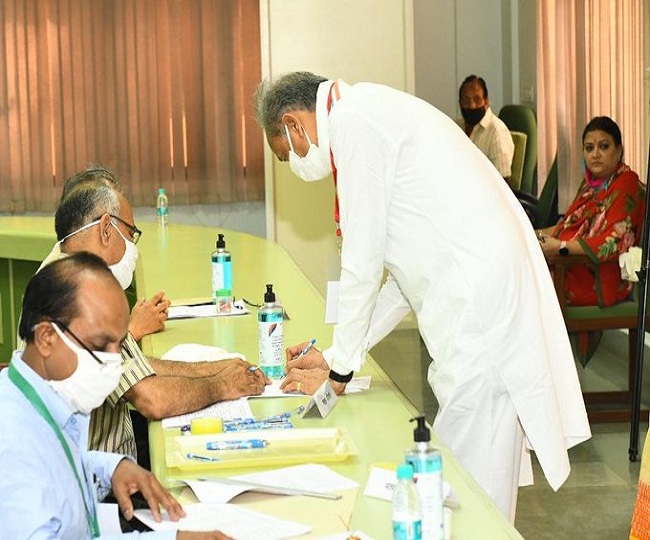 1:30 pm: Madhya Pradesh: State legislative assembly premises in Bhopal being sanitised after Congress MLA, who had tested positive for #COVID19 and had come here to cast his vote, left. Voting is currently underway for three Rajya Sabha seats of the state 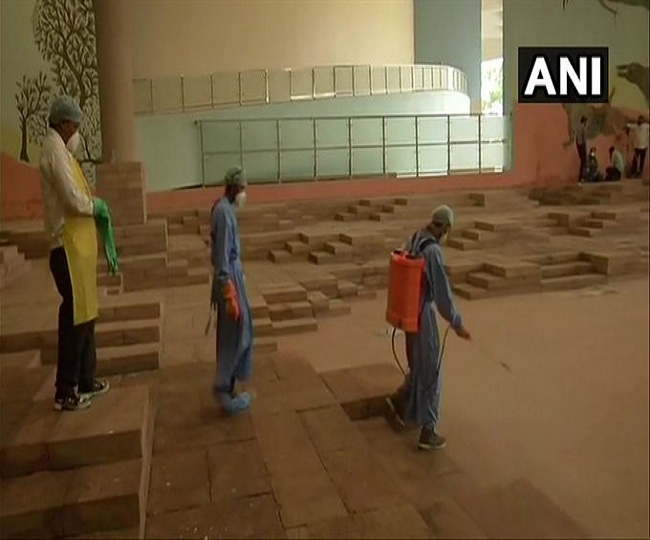 1:15 pm: Madhya Pradesh: A Congress MLA who had tested positive for #COVID19, arrives at the state legislative assembly in Bhopal to cast his vote. Voting is currently underway for three Rajya Sabha seats of the state. 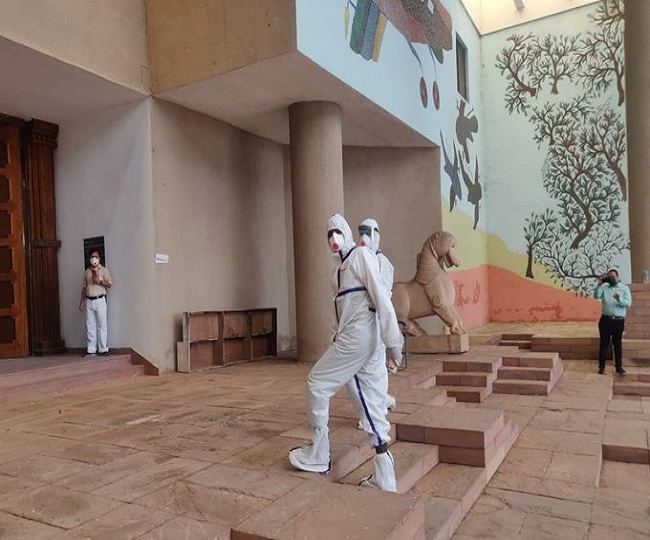 12:00 pm: Manipur Chief Minister N Biren Singh arrives at the state Assembly to cast his vote for one seat of Rajya Sabha. 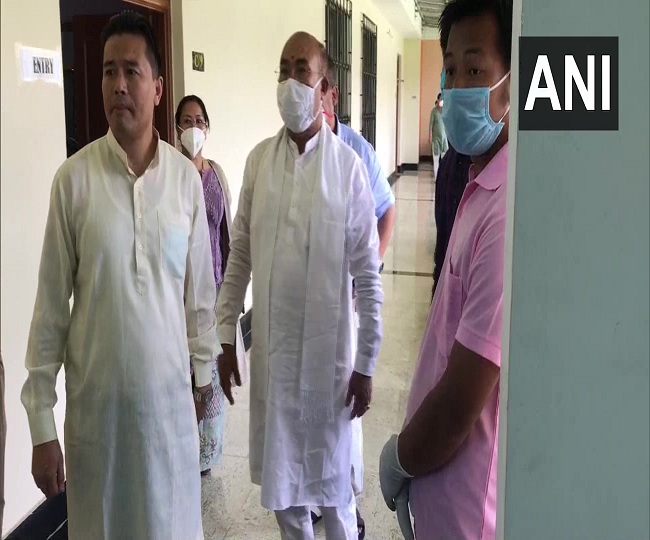 11:05 am: In order to ensure the MLAs who arrive at the Rajasthan Assembly to cast their votes for the Rajya Sabha polls don’t contract Covid-19, a contactless paddle hand sanitiser machine has been installed at the gate and thermal screening of the MLAs is being done.

10:50 am: Gujarat chief minister Vijay Rupani arrives at the state Assembly to cast his vote.

10:40 am: Andhra Pradesh Chief Minister YS Jagan Mohan Reddy casts his vote for the Rajya Sabha polls. The ruling YSR Congress is poised to win all the four seats given its formidable strength in the state assembly. 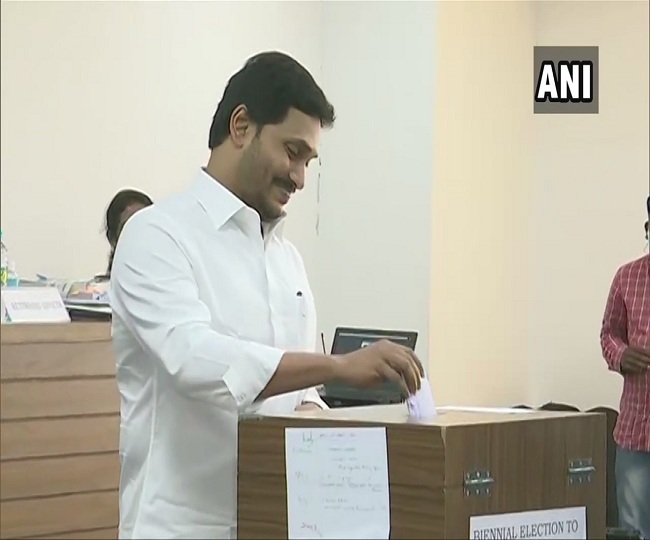 10:25 am: Meghalaya: Voting is underway for one seat of Rajya Sabha, at the state Assembly in Shillong. 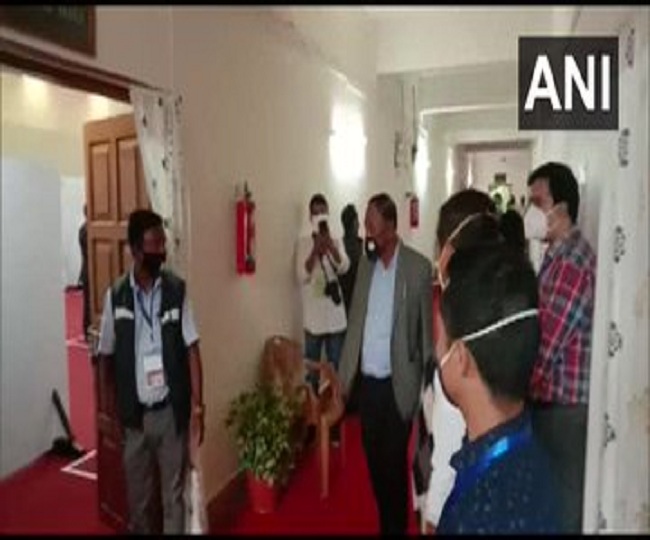 10:15 am: Independent MLAs Saryu Rai&Amit Yadav have extended their support to BJP&we hope to get the support of 2 other MLAs. With 32 votes, we hope to sent Deepak Prakash to Rajya Sabha: BJP MLA Biranchi Narayan Voting is underway for 2 Rajya Sabha seats at the state Assembly in Ranchi.

10:00 am: It is very clear that we will win one seat in the Rajya Sabha Election: Former Chief Minister & Congress leader Kamal Nath after casting his vote at the state Assembly in Bhopal. Voting is currently underway for three Rajya Sabha seats of the state. 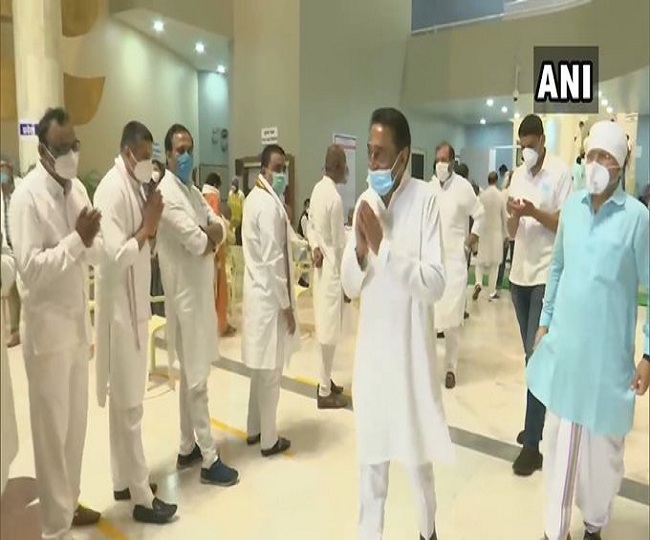 9:45 am: Gujarat: BJP MLA from Matar assembly constituency, Kesarisinh Jesangbhai Solanki arrives at legislative assembly in an ambulance. He was admitted at hospital following a health issue & reached here directly from the hospital. Polling for 3 Rajya Sabha seats of state is underway. 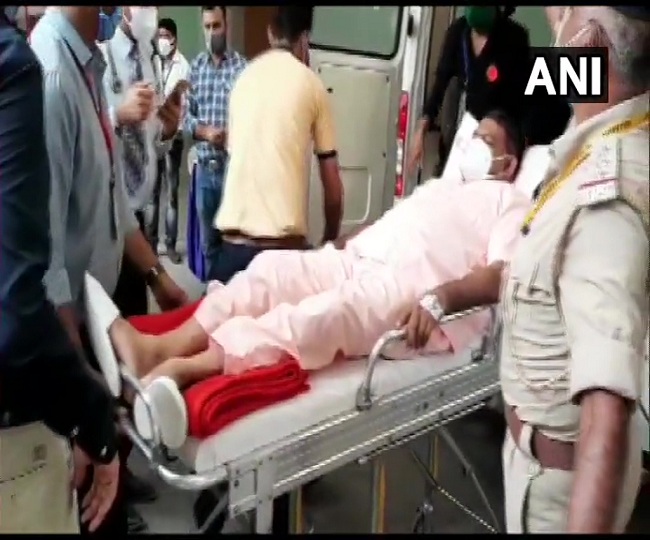 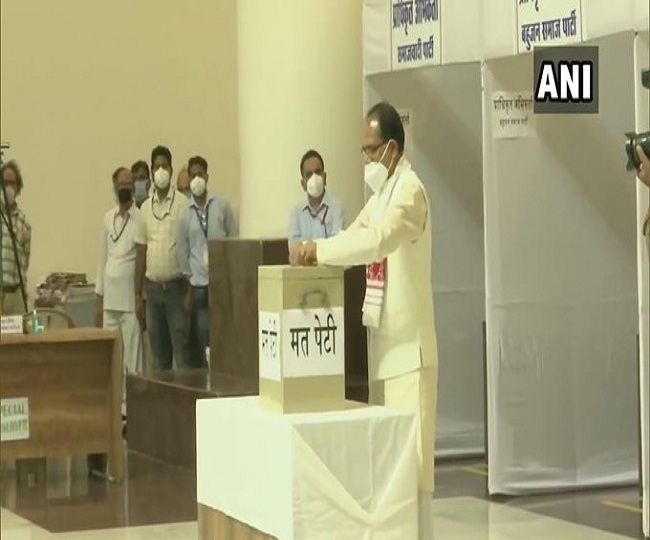 9:18 am: Madhya Pradesh: Buses carrying Congress MLAs, leave from party leader Kamal Nath's residence, for the state legislative assembly in Bhopal ahead of Rajya Sabha Election today. Voting to be held for three Rajya Sabha seats of the state today.

9:15 am: Originally the elections were to take place on March 26 for 55 Upper House seats, but 37 candidates have already been elected without a contest. The EC had deferred the March 26 Rajya Sabha elections citing the threat of the novel coronavirus pandemic.

9:10 am: Rajasthan: Three buses, carrying BJP MLAs, reach state legislative assembly in Jaipur ahead of the polling for Rajya Sabha Election today. In the state, polling for three seats to be held. 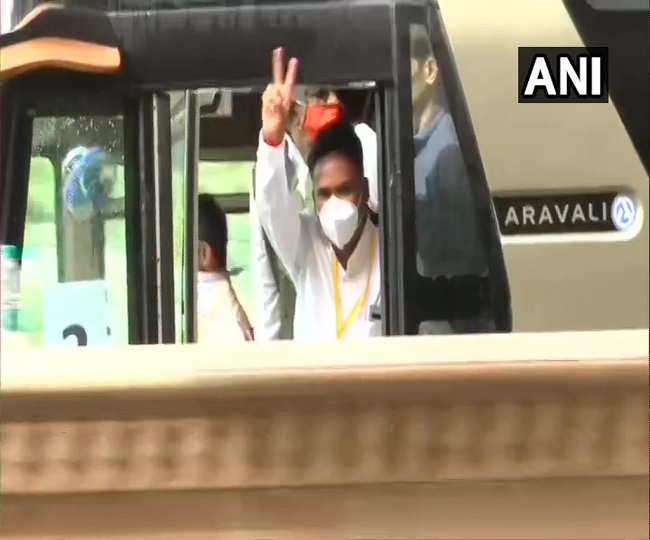 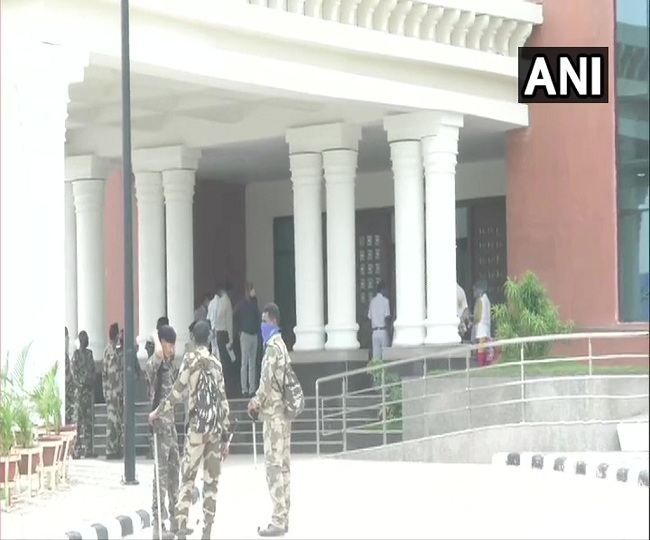 8:50 am: Gujarat: Polling for Rajya Sabha Election to take place today. In the state, polling to be held on four Rajya Sabha seats. Visuals from state legislative assembly in Gandhinagar. 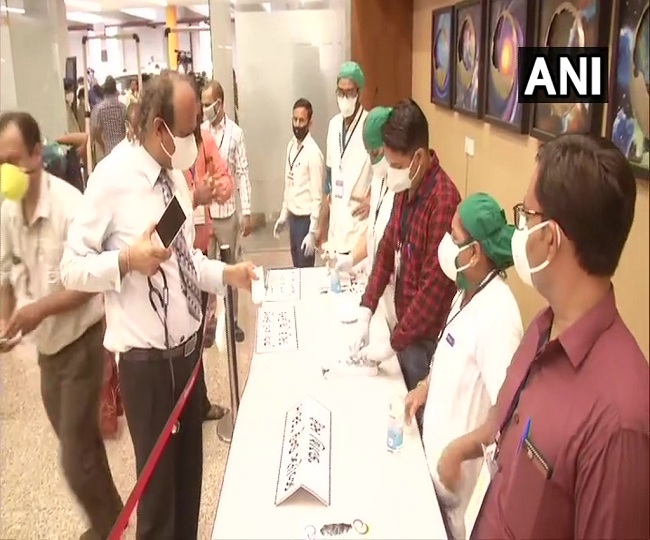 8:20 am: The counting of votes for all the 19 seats will be held on the evening of June 19 itself, the Election Commission said. Legislators vote to elect candidates for the Upper House of Parliament.

8:00 am: The Election Commission (EC) has made elaborate arrangements for the voting keeping in mind the coronavirus pandemic. Every voter (MLA) will be screened for body temperature and will have use mask and adhere to social distancing norms. Legislators having a fever or showing other symptoms will be kept in a separate waiting room.