Punjab Assembly Elections 2022: Navjot Singh Sidhu's resignation is a massive setback for the Congress. Interestingly, his resignation comes at a time when speculations are being made that Captain Amarinder Singh might join the BJP.

Chandigarh | Jagran Politics Desk: In a massive turn of events, senior Congress leader Navjot Singh Sidhu on Tuesday afternoon resigned as the president of Punjab Congress. However, Sidhu, who took to Twitter to make the announcement, said that he will continue to serve the Congress.

"The collapse of a man's character stems from the compromise corner. I can never compromise on Punjab's future and the agenda for the welfare of Punjab. Therefore, I hereby resign as the President of Punjab Pradesh Congress Committee. I will continue to serve the Congress," he said in his letter to Sonia Gandhi. 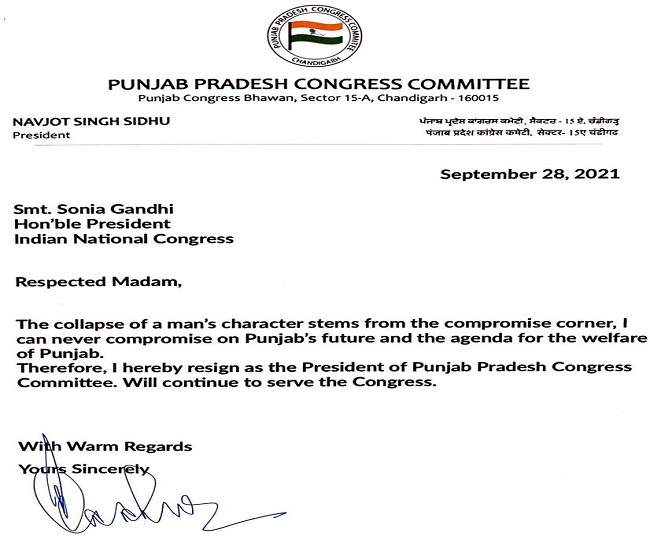 Though Sidhu did not mention why he resigned from his position, it is being speculated that he took the drastic step amid differences between the top party leadership over the cabinet of new Punjab Chief Minister Charanjit Singh Channi.

Sidhu was made Punjab Congress chief after a three-member committee suggested to the top party leadership that the cricketer-turned-politician should be suitably accommodated. However, Sidhu had alleged that he was not being given the freedom to make decisions in Punjab and warned that he will "not spare anyone".

"I have asked the high command to allow me to take decisions and I will ensure that the Congress prospers in the state for the next two decades. Nahin toh eint se eint bajaa dunga, (I will not spare anyone)," he had said.

Days later, Channi was appointed as the Chief Minister of Punjab after Sidhu's rival Captain Amarinder Singh resigned from his position. According to media reports, Sidhu was "upset" over the cabinet expansion in Punjab and "believed that they contradicted his pronouncements about fighting corruption". Sidhu's resignation is a massive setback for the Congress and Rahul Gandhi and his sister Priyanka Vadra, who were planning to contest the assembly elections in Punjab next year.