New Delhi | Jagran Politics Desk: In a massive turn of events, Navjot Singh Sidhu on Tuesday resigned from the position of Punjab Congress chief, leaving everyone, especially the Gandhi's, baffled. Though Sidhu did not reveal what prompted him to resign, it is widely speculated that he was "upset" about the cabinet changes made by new Chief Minister Charanjit Singh Channi.

Following Sidhu's resignation, former Chief Minister Captain Amarinder Singh made a scathing attack at the cricketer-turned-politician, saying he is not a "stable man". Captain Amarinder, who was at loggerheads with Sidhu since May, has also reached Delhi amid buzz that he might meet Union Home Minister Amit Shah and join the Bharatiya Janata Party (BJP).

14:47 hours: We've said again and again that we'll give you such a CM face that all of you will be proud, Punjab will be proud. We're holding a detailed press conference tomorrow, says Arvind Kejriwal.

14:39 hours: People of Punjab are upset over Bargari (sacrilege) case. Mastermind of the case, I don't need to say who he's, didn't get any punishment so far. Channi sahab should read Kunwar Vijay Pratap Singh's report, he'll find the names. They can be arrested within 24 hours, says Arvind Kejriwal.

14:30 hours: I congratulate Channi sahab on becoming CM. I'd like to tell him that it's being alleged that he inducted tainted ministers in his cabinet and gave good postings to tainted officers. I request him to sack them and take action, says Arvind Kejriwal.

14:11 hours: Whoever is party president, is head of the family. I had called him (Navjot Singh Sidhu) and told him that the party is supreme... I have spoken to him on phone and told him let's sit, talk it out and resolve the issue, says Punjab Chief Minister Charanjit Singh Channi.

13:29 hours: One man (Navjot Singh Sidhu) leaving or joining the party doesn't affect our prospects to win the election, Congress will form the govt again... What he did is no less than betrayal, says Congress' Sukhwinder Singh Kaka Kamboj.

He was chosen over Sunil Jakhar, who worked all his life for Congress. If he (Sidhu) is still not happy, then he can never be happy... Situation in Punjab is a bit disturbing. Gandhi family posed a lot of faith in him and then he did this, he added. 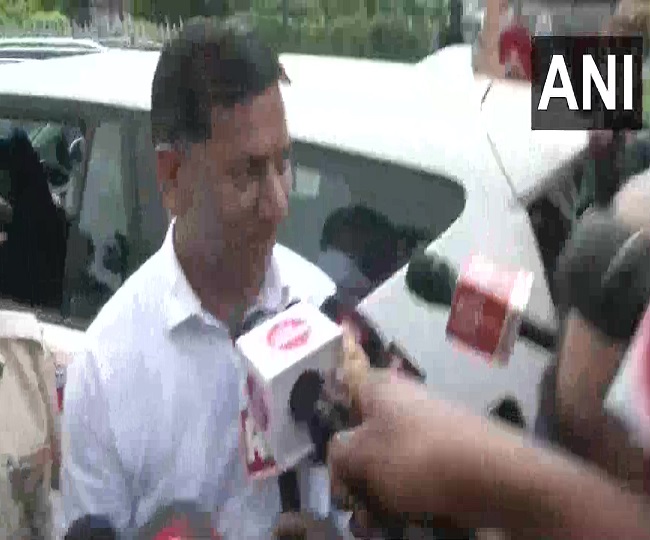 11:54 hours: What Punjab required at this point of time was a safe pair of hands that could keep the ship on an even keel. Unfortunately, people who were charged with the remit of looking at the state did not have a clue about the big picture, says says Congress' Manish Tewari.

Whatever Captain Singh had predicted is coming true. The concern of a large number of us who see things beyond the cut&thrust of partisan politics is implications that this will have on larger stability of Punjab, given the social turmoil because of farmers' agitation, he added. 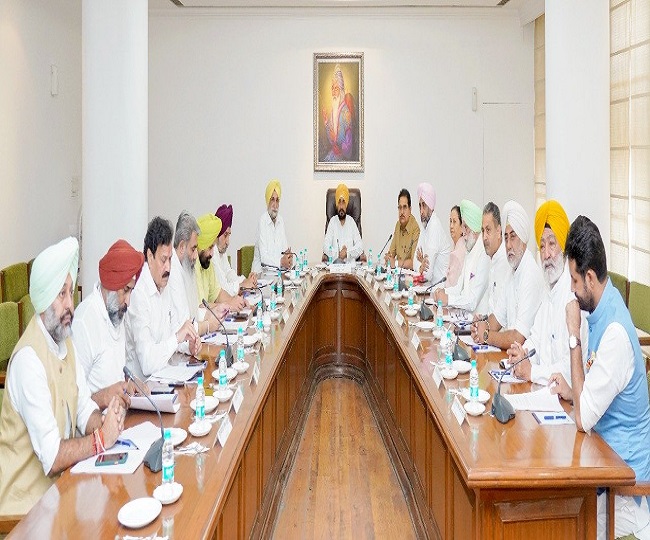 11:18 hours: Day after his resignation, Navjot Singh Sidhu has shared a video on his Twitter account, saying he won't compromise with his ethics and would continue to fight for the truth till his last breath.

"17 years of my political career has been for a purpose, to make difference, to take a stand and to make people's lives better. This is my only religion," Sidhu said. "I can't compromise with my ethics, moral authority. What I witness is a compromise with issues, agenda in Punjab. I can't disguise high command nor can I let them be disguised".

11:05 hours: The gentleman (Sidhu) can answer for himself. I'm in no position or neither would I like to articulate or second guess a question that can be best addressed by him, says Congress' Manish Tewari.

All I'm saying is, someone who cut his teeth on trench lines on fight against terrorism in Punjab,personally suffered because of depredations of militants,saw families of Congress men wiped out in struggle between '80-'95, this kind of instability is extremely disturbing, he added,

11:00 hours: There's a higher ideal than power, than ministers holding org positions. That higher ideal is ensuring peace, tranquillity and stability of a border state like Punjab. Under those circumstances what has been playing itself out is extremely unfortunate, says Congress' Manish Tewari.

10:45 hours: As a Punjab MP, I'm extremely distressed about happenings in Punjab. Peace in Punjab was extremely hard-won. 25,000 people, bulk of them Congress men, sacrificied themselves to bring peace back to Punjab after fighting extremism and terrorism between 1980-1995, says Congress' Manish Tewari.

I have just returned from a regional security conference and I can tell you that the only people who are very happy with what is going on in Punjab is the deep state of Pakistan. They feel that they will get an opportunity to fish in troubled waters, he added.

10:15 hours: According to media reports, Harish Singh Rawat's Punjab visit has been cancelled and the Congress has asked Chief Minister Charanjeet Singh Channi to resolve the ongoing crisis in party.

9:24 hours: Punjab Ministers Amarinder Singh Raja Warring and Pargat Singh leave from the residence of Navjot Singh Sidhu in Patiala after meeting him. 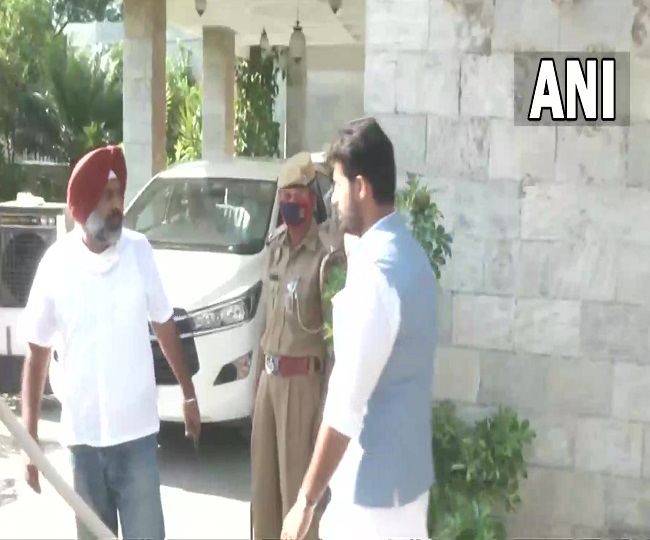 9:10 hours: Meanwhile, Congress leader Rahul Gandhi has arrived at the Calicut Airport in Kerala's Karipur. He will be visiting Kozhikode and Malappuram today. 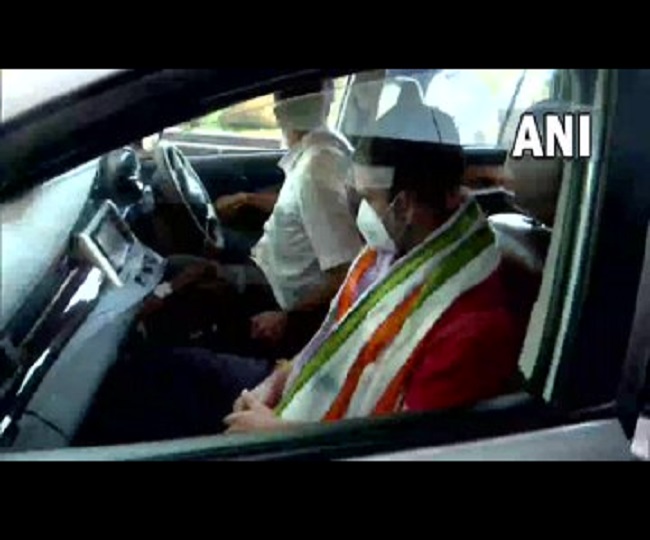 8:45 hours: The party has also said that there's "nothing to worry and everything will be alright".

8:31 hours: The Congress leadership, meanwhile, is puzzled over Sidhu's resignation. The party, however, has asked the state unit to resolve dispute internally.

8:00 hours: Earlier on Tuesday, Channi had said that he has full confidence and faith in Sidhu, adding that he had "no information" over the matter.

"The collapse of a man's character stems from the compromise corner, I can never compromise on Punjab's future and the agenda for the welfare of Punjab. Therefore, I hereby resign as the President of Punjab Pradesh Congress Committee. Will continue to serve the Congress," he said.

7:50 hours: Meanwhile, Chief Minister Charanjit Singh Channi will meet his cabinet today. The cabinet meeting is expected to be held at 10:30 am.

7:40 hours: Following Sidhu's resignation, his rival and former Chief Minister Captain Amarinder Singh said that the cricketer-turned-politician is not "fit" for Punjab, calling him an "unstable" man.

"I told you so... he is not a stable man and not fit for the border state of Punjab," he tweeted.

7:30 hours: Sidhu reportedly was also upset after his rival SS Randhawa was given a key post in the Punjab government.

7:25 hours: Reports also suggest that Sidhu was not happy after several leaders, who were linked to the "sacrilege" case, were given key posts in Punjab.

7:20 hours: Media reports suggest that Sidhu was "upset" about the cabinet changes made by new Chief Minister Charanjit Singh Channi.