Chandigarh | Jagran Politics Desk: Malwinder Singh Mali, one of the two advisors of Punjab Congress chief Navjot Singh Sidhu, on Friday resigned from his position amid controvery over his recent statements on Pakistan and Jammu and Kashmir.

In a press statement, Mali said that he withdraw his consent given for tendering suggestions to Sidhu. However, he warned that Chief Minister Captain Amarinder Singh and Punjab Minister Vijender Singh were "to be blamed if he faces any physical harm". 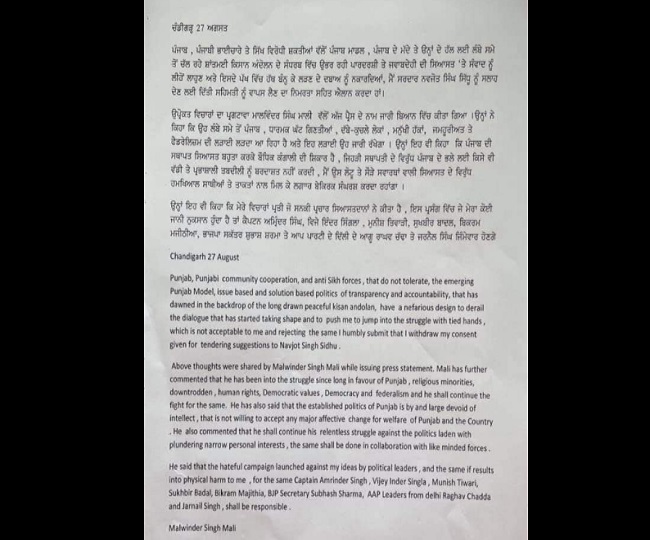 Mali's resignation comes a day after senior Congress leader and former Uttarakhand Chief Minister Harish Singh Rawat said that Sidhu needs to remove his advisors or the party will do same if "he fails to do so".

Mali and Dr Pyare Lal Garg -- Sidhu's other advisor -- had made controversial statements on Jammu and Kashmir and said that if the erstwhile state was a part of India, then what was the need to have Articles 370 and 35A.

Their statement once again intensified the crisis in Punjab after Chief Minister Captain Amarinder Singh summoned them and warned that such "atrocious and ill-conceived comments that were potentially dangerous to the peace and stability of the state and the country".

"The fact, which every Punjabi and in fact every Indian knows, is that Pakistan's threat to us is real. Every day they are pushing weapons and drugs into Punjab via drones in a brazen attempt to destabilise our state and our nation," Captain Amarinder had said in a release.

Captain Amarinder and Sidhu were at the loggerheads since May this year. However, the crisis in Punjab was resolved by the party high command after Sidhu was made the party's state unit chief ahead of the crucial assembly elections in the state next year.