Punjab Assembly Election Results 2022: In his tweet, Sunil Jakhar questioned Congress' decision to field Charanjit Singh Channi as Chief Minister. He also called Channi a "liability", adding that his "greed pulled him down".

Jakhar called Channi a "liability", adding that his "greed pulled him down". He also tweeted a picture of Channi with a newsclip that read, "ED seizes Rs 10 crore from Channi's nephew; CM cries foul."

"An asset - r u joking? Thank God he wasn’t declared a 'National Treasure' at CWC by the 'Pbi' lady who proposed him as CM in first place. May be an asset for her but for the party he has been only a liability. Not the top brass, but his own greed pulled him and the party down," Jakhar tweeted. 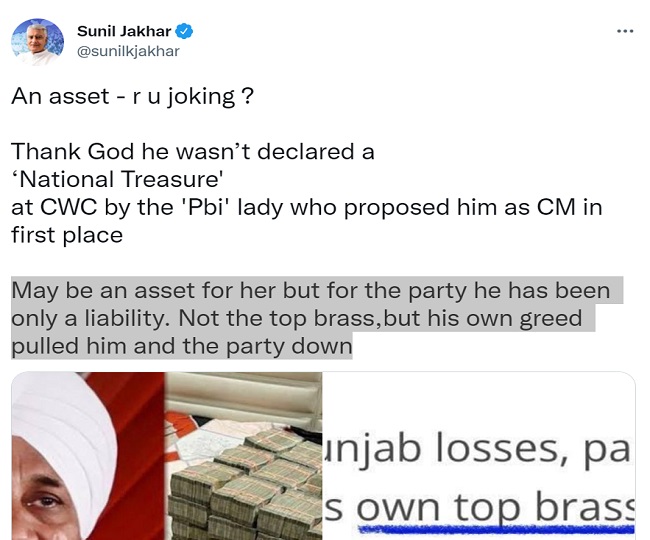 Jakhar's attack is probably aimed at Congress veteran Ambika Soni. Here it is noteworthy to mention that Jakhar had earlier accused Soni of jeopardising his chances of becoming the Chief Minister of Punjab.

Jakhar, earlier, had also claimed that Channi and Navjot Singh Sidhu were least favoured candidates for the top post in Punjab post Captain Amarinder Singh's exit from the party.

Congress failed miserably in the Punjab assembly elections 2022, winning just 18 seats in the 117-member legislative assembly of the state. Charanjit Singh Channi, who contested the polls from two seats - Chamkaur Sahib and Bhadaur, lost from both constituencies.