Early trends suggest a comfortable victory for the BJP-Shiv Sena alliance in Maharashtra.

New Delhi | Jagran News Desk: Early trends suggest a comfortable victory for the BJP-Shiv Sena alliance in Maharashtra. However, in Haryana, fear looms large of a hung House as neither the BJP nor the Congress seem to reach the majority mark. The counting of votes in the two states, currently ruled by the saffron party, is still underway.

Stakes are high for the BJP, which is incumbent in the two states and also for the Congress, which is seeking revival following the Lok Sabha poll debacle. Votes are also being counted for the by-elections held in 51 Assembly and two Lok Sabha constituencies across 17 states and one Union Territory.

In Maharashtra, exit polls have predicted a comfortable majority for the BJP-Shiv Sena combine, in fact better than what it performed in the 2014 state polls. The poll of polls has predicted 203-204 seats for the ruling alliance, and 67-68 seats for the Congress-NCP bonhomie.

In Haryana, most exit polls have projected a comfortable win for the saffron party, except India Today-Axis My India which has predicted a close fight between the BJP and Congress with the Jannayak Janta Party likely to play kingmaker.

Here are the LIVE updates on Assembly Elections 2019 Results in Maharashtra and Haryana:

19:53 pm: The political pundits who are analysing today's election results, Haryana in itself is an exceptional win since these days there have been less instances of winning again after completing a 5 year term: PM Modi

19:52 pm: Devendra Fadnavis ji and Manohar Lal ji both were first time chief ministers, they did not even have the experience as ministers. And for 5 years they kept working for people's welfare and as a result people have again put their faith in them: PM Modi

19:51 pm: People of Haryana and Maharashtra have put their faith in BJP and blessed us before Diwali. I want to thank them from the core of my heart: PM Modi 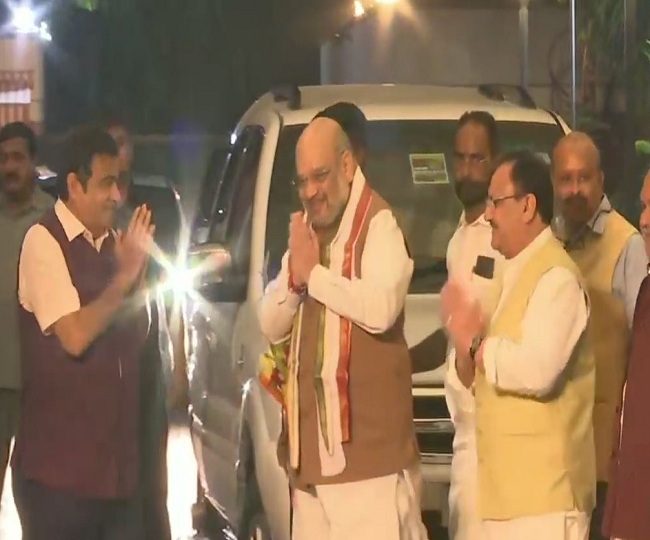 17:24 pm: Have won fewer seats in Maharashtra but our strike rate has improved. We are going to go ahead according to what has been decided between Shiv Sena and us (BJP). What has been decided is something which you will get to know when the time is right: Devendra Fadnavis

16:47 pm: It's a clear mandate for BJP-Sena: Devendra Fadnavis

16:43 pm: "Spoke to Devendra Fadnavis and we both congratulated each other," says Uddhav Thackeray.

16:41 pm: "We are not hungry for power and not greedy for post," says Uddhav Thackeray.

14:46 pm: BJP's Haryana chief Subhash Barala says that he has not resigned from his post and that the news of his resignation is a rumour, reports ANI.

13:07 pm: BJP state chief Subhash Barala, who is trailing in Tohana, has resigned from his party post, according to media reports.

13:01 pm: EC official figures show BJP and Congress at 35 seats each in Haryana.

12:42 pm: After ninth round of counting in Worli, Aaditya Thackeray leads with 47,396 votes while NCP’s Suresh Mane is way behind with 9,934 votes.

12:07 pm: Maharashtra CM Fadnavis leads by over 19,000 votes after tenth round in Nagpur South-West

12:03 pm: Haryana: "I have not had any discussions with any one. Decision will be taken only after the final numbers are out," ANI quoted Dushyant Chautala as saying.

11:49 am: I am going to meet Uddhav Ji. Number itne bure bhi nahi hain, aisa hota hai kabhi kabhi. Yes, we will definitely continue with the alliance. We have agreed upon a 50-50 formula: Sanjay Raut.

11:46 am: Maharashtra: Chief minister Devendra Fadnavis leads by over 12,400 votes after fifth round from Nagpur South-West constituency

10:24 am: Maharashtra: Devendra Fadnavis is leading in Nagpur South-West constituency

10:18 am: CM Devendra Fadnavis contesting from Nagpur South-West Constituency is leading, after 2nd round of counting.

10:07 am: Yuva Sena chief Aaditya Thackeray leads comfortably by 11,000 votes in Worli. Sanjay Raut has pitched for Thackeray as tghe next CM of the state.

09:59 am: Ajit Pawar leads by a huge margin of 18,000 votes against BJP candidate Gopichand Padalkar in Baramat.

09:14 am: Yogeshwar leading in Baroda assembly seat in Haryana.

08:23 am: Initial trends show BJP leading on 63 seats in Maharashtra and 14 seats in Haryana.

08:13 am: Postal ballots are being counted first.

08:00 am: Counting of votes for Maharashtra and Haryana Assembly elections begins. 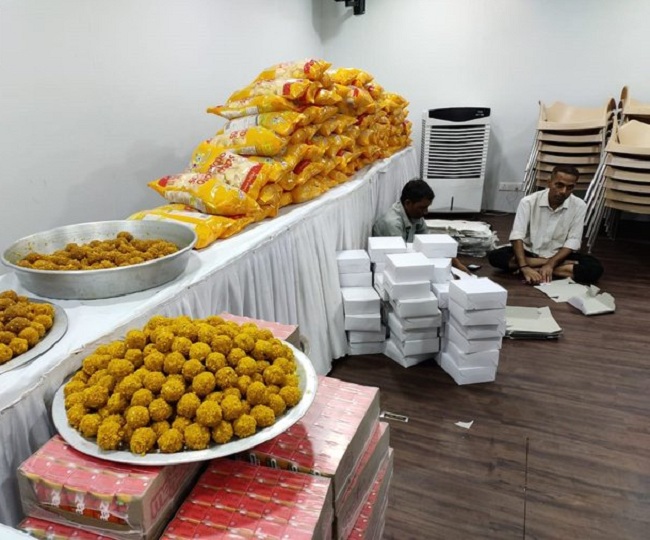 07:49 am: Counting of votes to begin soon at counting centre in Colaba.

7:45 am: Counting of votes will begin at 8 am. Early trends are expected to trickle down by 9 am.

7:40 am: Haryana Assembly Elections 2019 Resulta: "People have given me love and support, that is my strength a 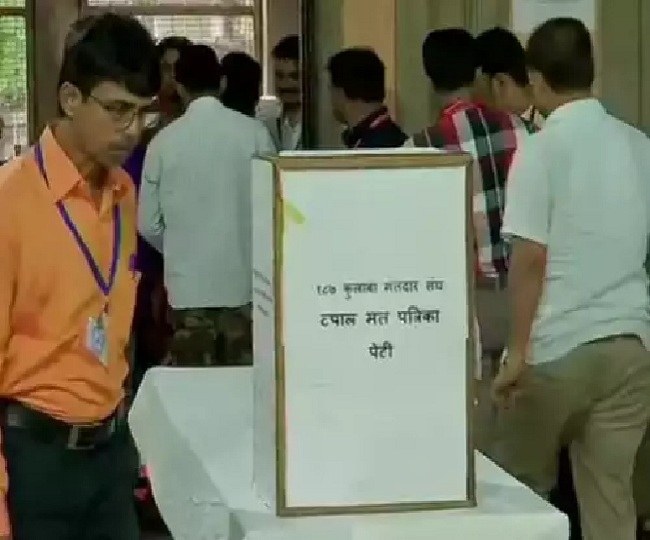 nd what keeps me going. I have faith in public and myself, people will give blessings to their daughter," says Babita Phogat.

07:32 am: Maharashtra Assembly Elections 2019 Results: The ruling BJP-Shiv Sena combine is arrayed against the opposition Congress-NCP with the Vanchit Bahujan Aghadi being the dominant player among the other parties.

07:18 am: People have given me love and support, that is my strength, and what keeps me going. I have faith in public and myself, people will give blessings to their daughter: Babita Phogat, BJP candidate from Dadri.

07:17 am: BJP state office in Maharashtra decorated ahead of counting of votes. 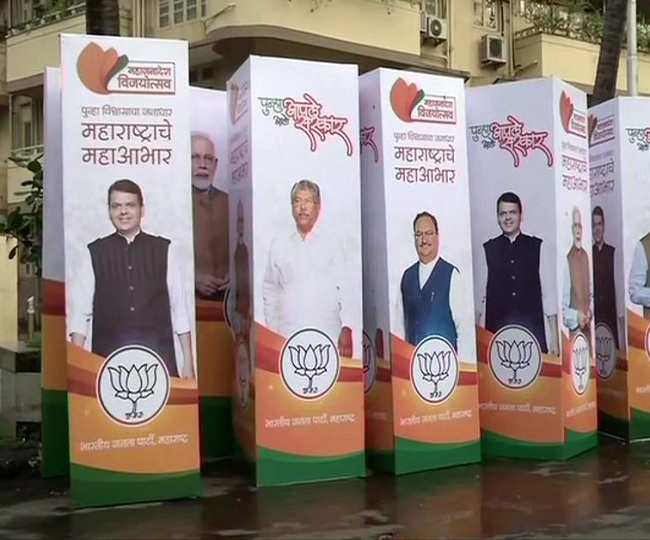 07:10 am: Maharashtra Assembly Elections 2019 Results Live Updates: Counting of votes to begin at 8 am

07:08 am: The counting of votes at 269 locations in Maharashtra and 59 locations in Haryana, where VVPAT paper trail machines used in Monday's polling are kept, will begin at 8 am.