New Delhi | Jagran News Desk: The Bharatiya Janata Party (BJP) on Friday released the fourth list of seven candidates for the upcoming polls in Maharashtra. In a surprise move, the party has not fielded Raj Purohit, Prakash Mehta and Vinod Tawde.

According to the list, Rohini Kadse will contest the elections from Muktainagar, Charan Singh Thakur will contest from Katol, Pradeep Padole will fight from Tumsar.

While Rahul Dhikale will contest from Nashik East, Sunil Rane from Borivali, Parag Shah from Ghatkopar East and Rahul Narvekar from Colaba. 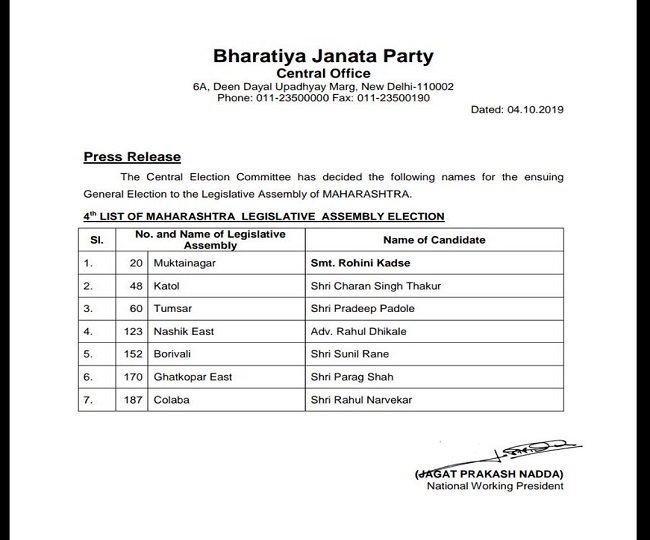 With this, the BJP has announced 150 candidates for the respective number of seats and 95 of them have already filed their nomination papers.

The party had released the first list of candidates on Tuesday. According to the first list, Chief Minister Devendra Fadnavis will be contesting from Nagpur South West while the state party chief Chandrakant Patil will contest from Kothrud and Pankaja Munde will be fighting the elections from Parli.

Also Read
'Be it BJP or Congress, I am everyone's CM': Arvind Kejriwal begins third..