Maharashtra Govt Formation: ﻿'Have asked for more time but the Guv has refused,' says Aaditya Thackeray | As it happened

Mumbai | Jagran News Desk: The ongoing tug-of-war for power in Maharashtra doesn’t seem to be getting over any time soon. After the BJP declined to form government in the state, Governor Bhagat Singh Koshyari has invited Shiv Sena to stake claim.

The Sena, the second-largest party in the 288-member House with 56 MLAs after the BJP (105), has time till 7:30 pm on Monday, to stake the claim. While the Sena has been making efforts to reach out to the NCP and the Congress, the Sharad Pawar-led party said the Sena will have to walk out of the NDA first.

Meanwhile, Sena MP Arvind Sawant on Monday morning said that he will resign as a minister in Prime Minister Narendra Modi’s government. The fast-paced developments seem to have increased the bargaining power of opposition Congress and NCP, as the Sena, which has 56 MLAs, is far away from the halfway mark of 145.

19:41 pm: "We told the Guv that we're willing to form the govt. We asked him for at least 2 days time but we weren't given time. The claim (to form govt) wasn't denied but the time was. We'll continue to put in efforts to form govt in the state," says Aaditya Thackeray after meeting Governor. 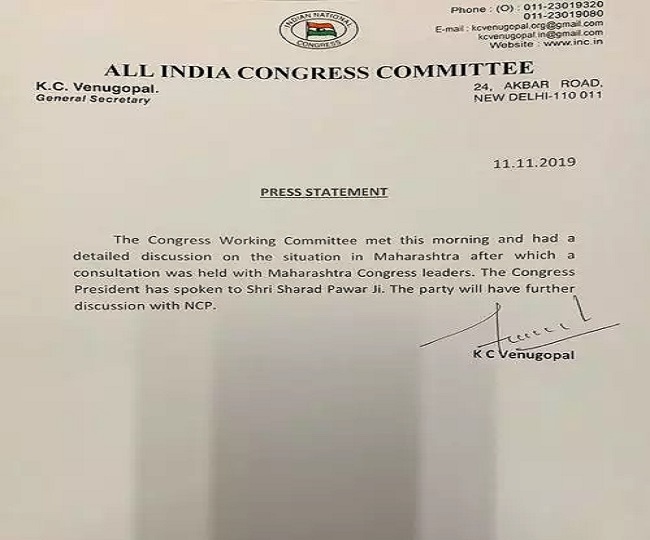 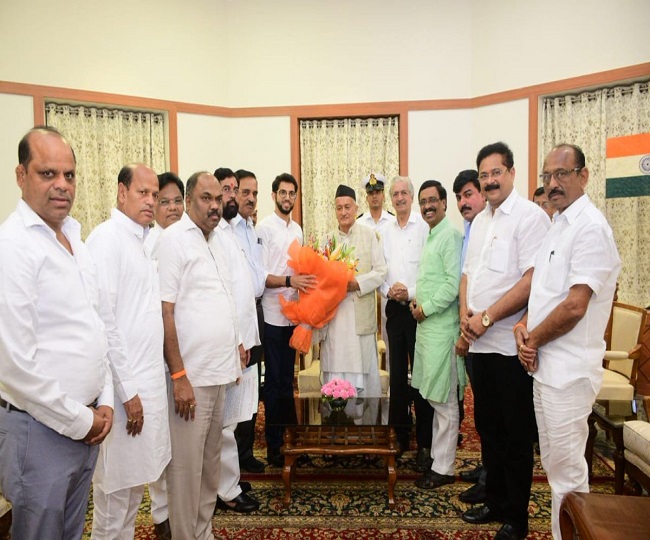 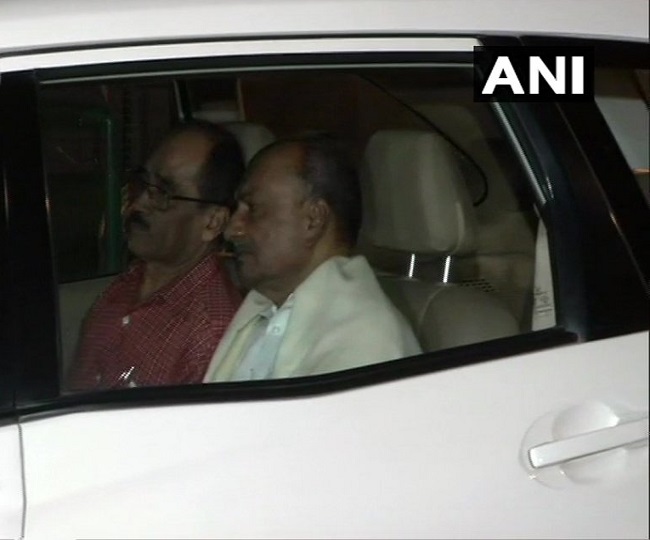 19:03 pm: Congress will support Shiv Sena and NCP, both the parties have been informed. Final proceedings are being done. 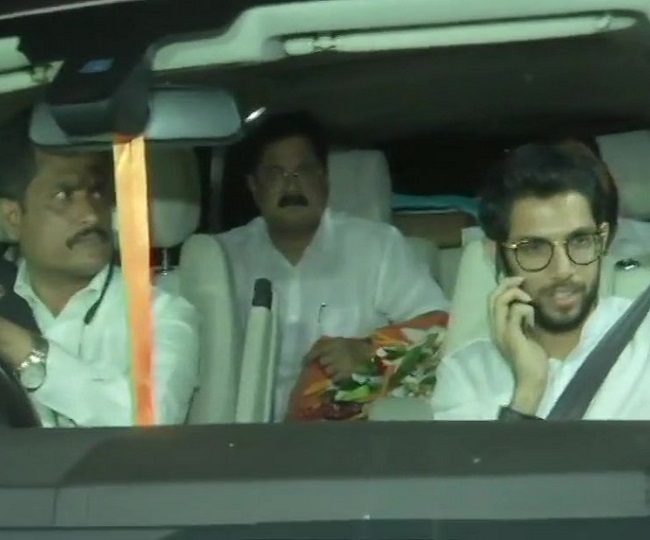 18:38 pm: "We will seek time from the governor to prove majority in the house," PTI quoted a Sena source as saying.

18:37 pm: "As per the governor's invitation to express our willingness and ability to form the government issued to us yesterday, we are responding to it positively," PTI quoted a Sena source as saying.

18:34 pm: The Shiv Sena is set to form government in Maharashtra with support from Sharad Pawar's Nationalist Congress Party (NCP) and the Congress, say reports.

17:52 pm: Congress Interim President Sonia Gandhi speaks to some party MLAs from Maharashtra who are lodged in a Jaipur hotel, reports ANI.

17:16 pm: "Raut visited the Lilavati Hospital after he complained for slight chest pain. He is being treated by Dr. Jaleel Parkar," PTI quoted an official as saying.

#WATCH Sunil Raut,brother of Shiv Sena leader Sanjay Raut: Since last 15 days Sanjay Sahab has been suffering from chest pain. But it's not serious.He has been admitted for routine check up.I think today evening his angiography will be performed&he'll be released in a day or two. pic.twitter.com/8Wk1cys4oH 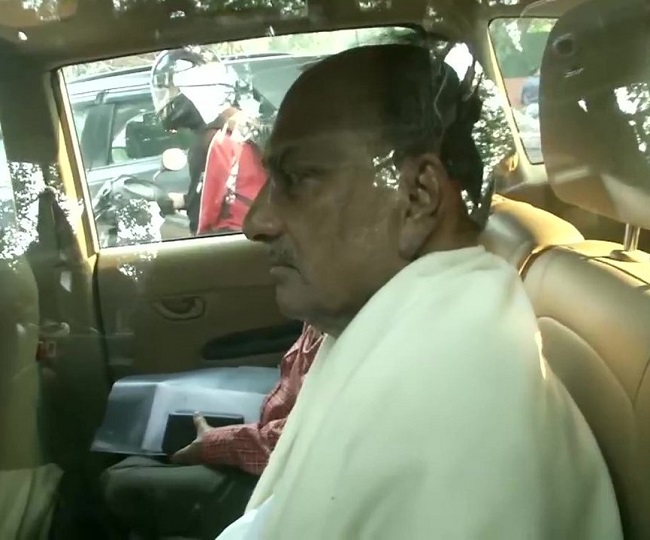 15:28 pm: "Balasaheb gave place to BJP in Maharashtra, Advani and Vajpayee went to Bala Saheb's residence and requested him for seats. BJP overrode that, that's why Uddhav Thackeray has taken a stand that he will teach them a lesson. Now, it's for Congress and NCP to put down BJP," says JD(S) chief and former PM HD Deve Gowda.

15:27 pm: "If Congress gives support to Shiv Sena, they should not disturb it for next 5 years. Then only people will trust Congress," says JD(S) chief and former PM HD Deve Gowda.

#WATCH Delhi: Shiv Sena leader Arvind Sawant speaks on party leader Aaditya Thackeray; says, "...You will get to know his potential if you watch him on YouTube. What a potential that young boy is having! There's a true leadership. He is a visionary leader of the country." pic.twitter.com/BWDzypxg58

14:52 pm: "All the Sena legislators have signed our party's proposal to stake claim to form government. We are, however, waiting for an official communication from the NCP and Congress on extending support to us," says Shiv Sena MLA Pratap Sarnaik. 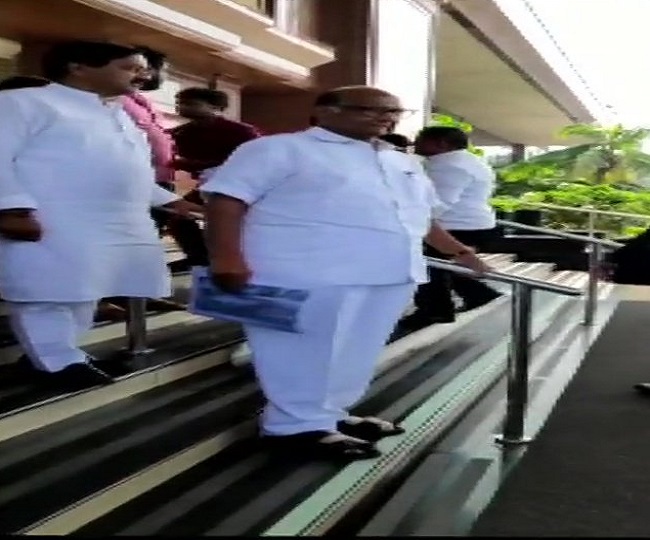 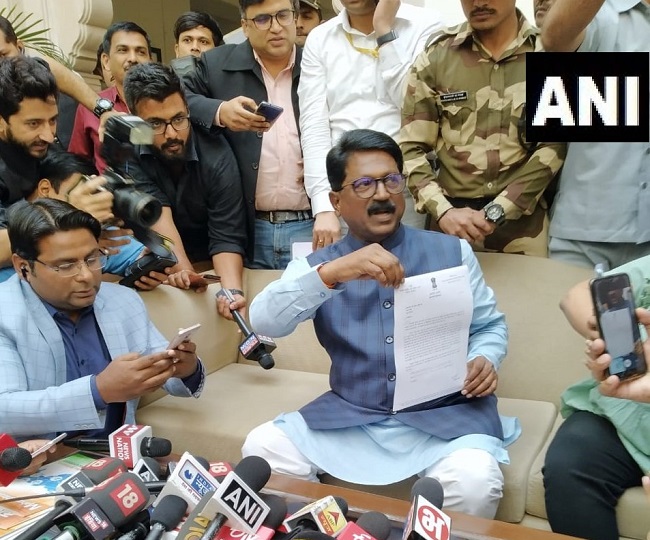 13:40 pm: BJP went back from their pre-election promises. It would not have been morally right for me to continue in the Centre, so I have resigned as Union Minister: Arvind Sawant.

13:37 pm: I cannot continue my post as Union minister. I have sent my resignation letter to PM Narendra Modi. BJP betrayed our trust over '50-50' formula: Arvind Sawant.

13:33 pm: "An odd situation has presented itself in Maharashtra. The mandate was for the BJP and Shiv Sena alliance but they did not form the government," says Congress' Jyotiraditya Scindia.

13:00 pm: It is our responsibility to give alternative; hence will take decision jointly with Congress: NCP.

12:40 pm: "Congress MLAs are in favour of supporting Shiv Sena-led government, but Congress Working Committee (CWC) is the supreme body to decide on their party line," says NCP's Nawab Malik.

12:35 pm: "We are waiting for Congress to take a decision. We fought elections together and whatever will be decided, it will be decided together," says NCP's Nawab Malik.

12:22 pm: "We have called our Maharashtra leaders to Delhi for further discussions, the meeting will be at 4 pm," says Mallikarjun Kharge after party's Working Committee meeting ends.

12:22 pm: Media reports suggest that Shiv Sena will meet Governor Bhagat Singh Koshyari in the afternoon and hand over the letter of support.

12:21 pm: Congress' CWC meeting, chaired by UPA chairperson Sonia Gandhi, over Maharashtra concludes. As per reports, Congress has not taken any decision over joining hands with Shiv Sena. Another meeting is expected at 4 pm.

11:51 am: Sena pulls out lone minister in Centre, is it the end of 30-year-old alliance with BJP?

11:24 am: "Vo jaane bhai isme humko kya matlab hai?," Nitish Kumar on being asked 'Shiv Sena has left NDA, what do you have to say?' 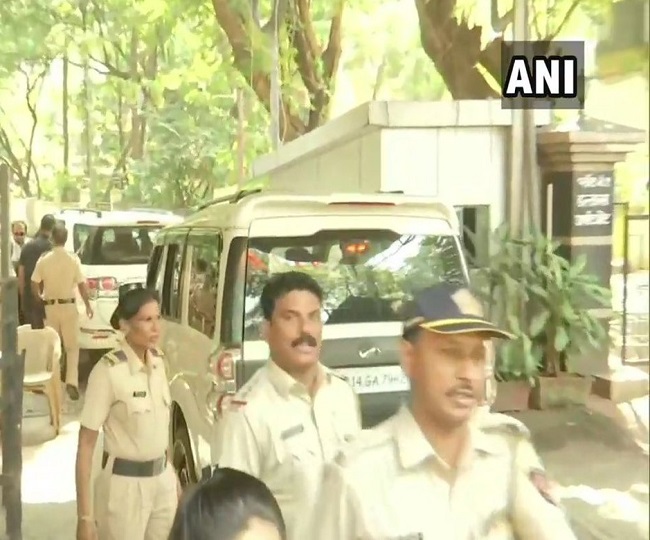 10:55 am: NCP chief Sharad Pawar is chairing party's core group meeting in Mumbai to discuss the current political situation in Maharashtra after BJP, despite being the single-largest party, expressed its inability to form the government owing to its differences with ally Shiv Sena

10:21 am: It would have been easy if Governor had given us more time. BJP was given 72 hrs; we've been given lesser time. It's a strategy of BJP to impose President's rule in state: Sanjay Raut. 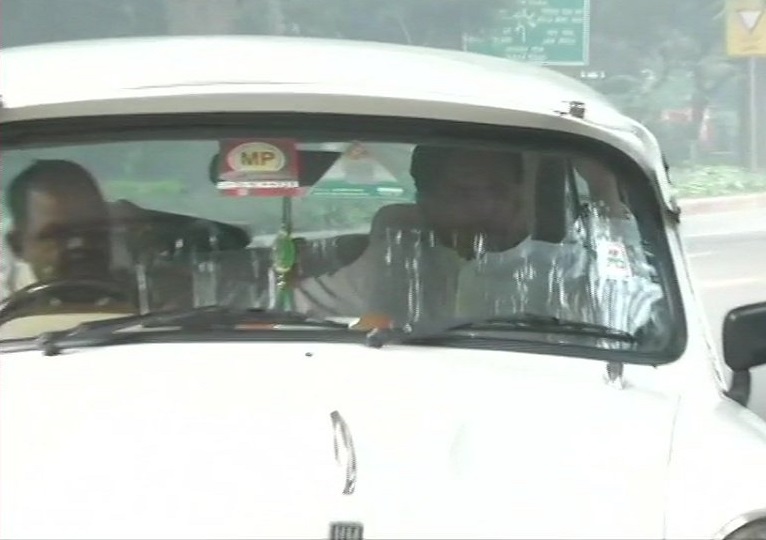 10:03 am: It is BJP's arrogance that they are refusing to form govt in Maharashtra. It is an insult to the people of Maharashtra. They are willing to sit in opposition, but they are reluctant to follow the 50-50 formula, for which they agreed before polls: Sanjay Raut

9:51 am: BJP never had the intention to give Shiv Sena the CM post: Sanjay Raut

9:51 am: BJP is unwilling to keep its promise over CM post: Sanjay Raut

9:22 am: Nationalist Congress Party (NCP) chief Sharad Pawar to chair party's core group meeting which is to be held today in Mumbai, over the current political situation in the state. Praful Patel, Supriya Sule, Ajit Pawar, Jayant Patil & other party leaders will be present, reports ANI.

9:20 am: The political instability in Maharashtra cannot be ruled out. Get ready for early elections. It may take place in 2020: Congress leader Sanjay Nirupam on Twitter

9:14 am: Congress has called a Congress Working Committee (CWC) meeting today at Congress interim President Sonia Gandhi's residence in Delhi, over the political situation in Maharashtra.

9:06 am: There's a meeting at 10 am today. We will proceed according to instruction from high command. But our original decision and decision of the people is that we should sit in opposition, that is the present position, says Congress' Mallikarjun Kharge.

8:59 am: BJP core group meeting to be held today at the residence of Devendra Fadnavis in Mumbai, reported ANI.

8:50 am: Shiv Sena MP Arvind Sawant resigned as Union Minister amid tussle with BJP. "Shiv Sena is on the side of Truth. In such atmosphere why I should be in the central government. I am giving resignation from my ministerial post. I will do a press conference today at 11 am for the same," he tweeted.