The BJP's move now places the onus on the Sena, which had repeatedly warned that if the BJP did not accept its demands, it was ready to form government.

Mumbai | Jagran news Desk: The core committe of the BJP today held a meeting and met Governor Bhagat Singh Koshyari, who on Saturday, asked them to "indicate the willingness and ability" to form government, creating hope that the 15-day- long political impasse in the state will end. After meeting the Governor, party leader Chandrakant Patil said that they will not form the government in the state.

Meanwhile, the Shiv Sena is keeping a close watch on the situation in the state. The party has also put all its MLAs at a resort at Madh Island in suburban Mumbai as it wants to stop any attempt by the BJP to poach its MLAs. 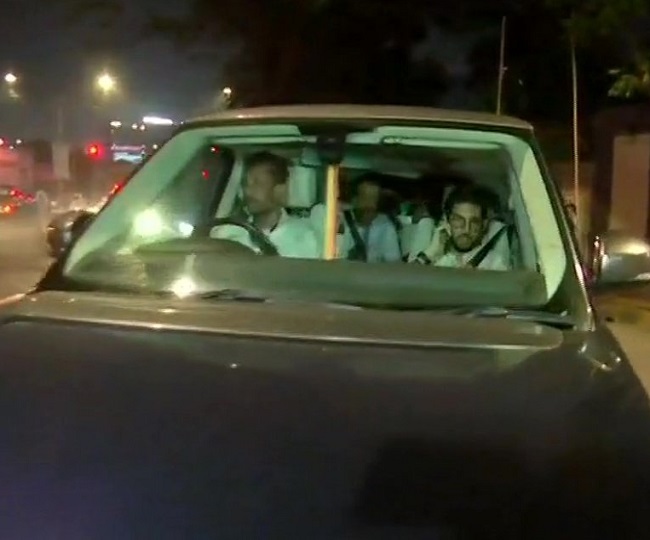 20:17 pm: Governor Bhagat Singh Koshyari today asked the leader of elected members of the second largest party, the Shiv Sena, Eknath Shinde to indicate the willingness and ability of his party to form the government in Maharashtra: ANI quoted Office of Maharashtra Governor as saying

20:17 pm: We have called a meeting of our MLAs on Nov 12. If Shiv Sena wants our support,they will have to declare that they have no relation with BJP and they should pull out from National Democratic Alliance (NDA). All their ministers will have to resign from Union Cabinet: NCP's Nawab Malik

20:08 pm: If Governor invites Shiv Sena to stake claim to form govt then we will think about our next step. Till now,we haven't received any proposal from Shiv Sena. The final decision will be taken by Congress and NCP together as declared by Pawar Sahab: NCP's Nawab Malik

19:52 pm: We have not changed our stand from day one. We have always maintained that we will sit in the opposition and respect the mandate, said Congress' Mallikarjun Kharge earlier

19:34 pm: We are keeping an eye on recent developments. We are meeting now and discussing all the options before us. We have not decided anything yet: Ashok Chavan

19:21 pm: How will BJP have its chief minister when they are not staking a claim to form government: Sanjay Raut

19:14 pm: Congress MLAs will seek advice of the party high-command on its future political stand in Maharashtra: Ashok Chavan

19:05 pm: "Party chief Uddhav Thackeray ji clearly said today that Chief Minister will be from Shiv Sena. If Uddhav ji has said so, then it means that there will be CM from Shiv Sena, at any cost," says Sanjay Raut

18:47 pm: The BJP's move now places the onus on the Sena, which had repeatedly warned that if the BJP did not accept its demands, it was ready to form government.

18:33 pm: The Sena had been adamant in their demand for half the cabinet berths and a rotational system for the Chief Minister's post. The BJP had made it clear that it would not share the top post.

18:32 pm: On Friday, after Fadnavis resigned as Chief Minister and was asked by the governor to continue as caretaker CM.

18:28 pm: We got a good mandate and we could have formed the government comfortably: Chandrakant Patil

18:18 pm: Earlier, the Governor had asked the BJP "indicate the willingness and ability" to form government, creating hope that the 15-day- long political impasse in the state will end.

18:17 pm: Chandrakant Patil, Maharashtra BJP President: The mandate was given to us (BJP-Shiv Sena) to work together if Shiv Sena wants to disrespect it and form govt with Congress-NCP then all our best wishes are with them.

18:12 pm: BJP President, Chandrakant Patil after meeting Governor Bhagat Singh Koshyari: We will not form government in the state.