New Delhi | Jagran News Desk: MP Bypoll Results 2020: The BJP has won 19 of the 28 Assembly constituencies in Madhya Pradesh where by-elections were held on November 3. The saffron party is also leading in one more seat -- Gwalior East -- by a narrow margin of 48 votes. The Opposition Congress, which was hoping to make a turnaround and return to power have so far managed to win just eight seats. Shivraj Singh Chouhan only needed nine seats to reach the halfway mark. However, BJP minister Imarti Devi has lost from Dabra.

The exit polls had predicted that CM Chouhan will secure the majority by winning 16 of the 28 seats where bypolls were held. The Congress, if the exit polls hold true, is likely to win 11 seats. Mayawati's BSP may also grab one of the seats where by-elections were held on November 3. Both the Congress and the BJP as well as the people of the entire country are eagerly waiting for the closely contested by-elections.

09:15 pm: BJP has won 19 seats, while Congress bagged 8. BJP candidate leading by 48 votes in a neck and neck fight in Gwalior East.

09:00 pm: BJP minister Imarti Devi, who made headlines after Kamal Nath's 'item' dig, has lost the by-election in Dabra.

Also Read
Priyanka Gandhi to be Congress' CM face for 2022 UP polls, party to..

03:50 pm: Whatever be the outcome of any election, it's time to stop blaming the EVM. In my experience, the EVM system is robust, accurate and dependable.

03:40 pm: EVMs are not tamper-proof, and selective tampering is done. There are seats that we would have not lost in any circumstance but we did by thousands of votes. We'll hold a meeting tomorrow & analyse the results: Congress leader Digvijaya Singh

2:00 pm: BJP has now taken lead in 21 seats while Congress is ahead in just six. The BSP is also leading in one seat - Morena.

01:05 pm: The BJP is now leading in 20 of the 28 Assembly constituencies where bypolls were held on November 3. The Congress is ahead in seven seats, while BSP has taken lead on one seat - Morena.

12:40 pm: BJP leaders, including CM Shivraj Singh Chouhan, exchange sweets at their Bhopal office as trends show the party leading on 19 of the 28 seats. Congress is leading on 8 & BSP on one. In the 230-member assembly, BJP at present has 107 MLAs & Congress 88. 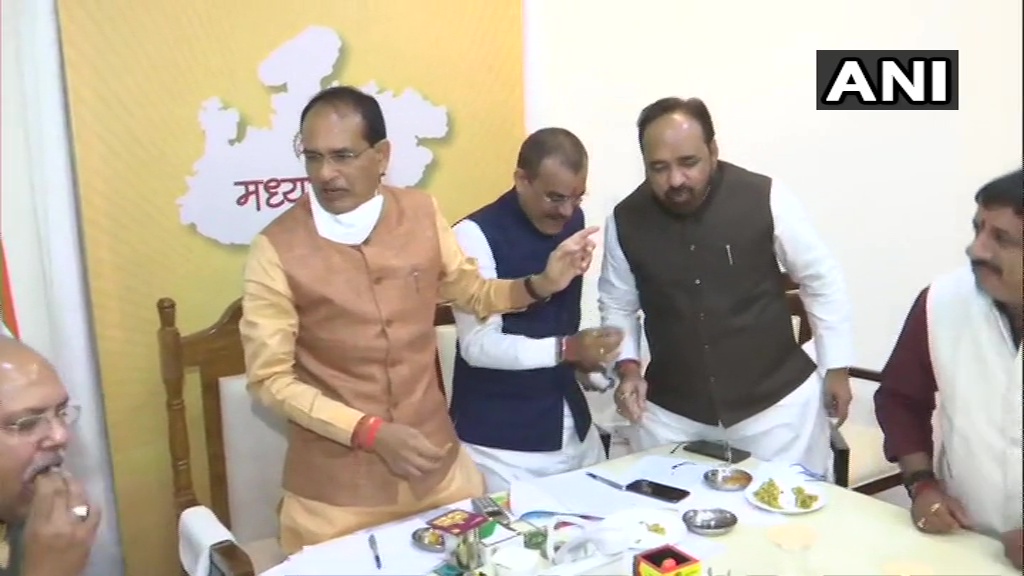 12:30 pm: Shivraj Singh Chouhan says it's clearly visible now that the people of Madhya Pradesh has decided to give the responsibility of the state's development to the BJP.

12:00 pm: Madhya Pradesh Bypolls: BJP leading on 17 seats, Congress on 9 and BSP on 2, as per Election Commission trends of all 28 seats which went to by-polls.

11:50 am: Madhya Pradesh by-polls: Bharatiya Janata Party leading on 17 seats, Congress on 9 and Bahujan Samaj Party on one.

11:40 am: Shivraj Singh Chouhan and Jyotiraditya duo appear to have won the prestige battle vs Kamal Nath in Madhya Pradesh.

11:30 am: BJP has nothing to lose, those who are losing ask them. We'll only gain. I heard Digvijaya Singh's statement. If he's questioning EVM, it means BJP is winning. We're getting majority & the two elderlies (Digvijaya Singh, Kamal Nath) are going to Delhi: MP Minister Narottam Mishra

10:50 am: Nine of the 12 BJP ministers are leading in their respective constituencies. Govind Singh Rajput and Tulsi Silawat, who resigned after six months, are also leading in Surkhi and Sanver seats.

10:30 am: "Ballot papers of covid patients haven't been counted yet, I have no such information and it is clearly a public vs administration election," said Congress' Digvijaya Singh

10:20 am: BJP is trailing in four of the five seats in Morena district. BSP candidate has overtaken his BJP opponent in Morena constituency.

10:10 am: BJP Minister Suresh Rathkheda is leading in Pohari seat, according to early trends.

09:50 am: Congress' Pragilal Jatav is leading in Karera seat.

09:40 am: "I wished for safety of MP 's future. I have full faith on voters they will decide between the truth and lies," said MPCC chief Kamal Nath.

09:25 am: Bharatiya Janata Party takes lead on two out of the 28 Madhya Pradesh Assembly seats which voted in by-polls, as per Election Commission trends.

09:15 am: Congress candidate Rajvir Singh Baghel is leading by 1171 votes in Hatpipalia.

09:10 am: In Surkhi seat, Govind Singh Rajput is leading in 30 rounds by 3093 votes, while BJP candidate Narayan Singh Panwar from Biaora by 1000 votes after the first round.

09:00 am: BJP ahead in three seats after one hour of counting., show initial trends.

08:50 am: First trends are out and BJP is ahead in one seat. BJP only needs nine seats.

08:40 am: Madhya Pradesh: Counting of votes for by-polls in 28 assembly seats is underway; visuals from a counting centre in Gwalior. 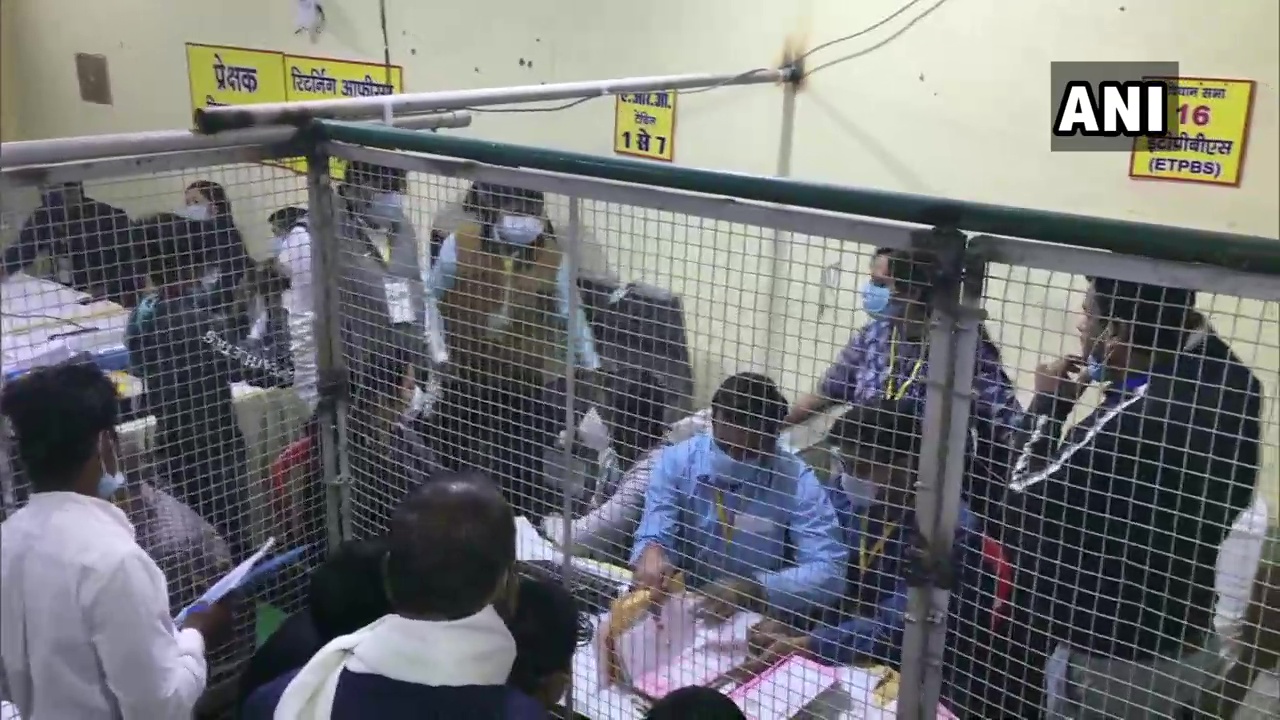 08:25 am: Early trends will come shortly as counting of votes underway for 28 seats where bypolls were held.

08:10 am: Counting of votes underway in Madhya Pradesh. Initial trends to come soon.

08:00 am: Counting of votes for 28 Madhya Pradesh Assembly elections begins.

Counting of votes in by-polls to 58 Assembly seats in 11 states to begin at 8am; Visuals from counting centres in Gujarat's Dang (pics 1 & 2) and Madhya Pradesh's Morena (pics 3 & 4) pic.twitter.com/mlgTQy03aA

07:15 am: What did MP by-elections exit polls predict? If the exit polls hold true, Shivraj Singh Chouhan is likely to win 16-17 of the 28 seats. The Congress is predicted to win 11 seats. One seat may go to the BSP.

06:55 am: It's Tuesday today, the day dedicated to Hindu Lord Hanuman. The Congress party has also sought Lord Hanuman's blessings ahead of results today.

06:30 am: Hello and welcome to our live blog for the Madhya Pradesh Assembly by-elections, which were held in 28 seats on November 3. The counting of votes will start at 8 am and soon the first trends will also start coming. Stay with us as we bring you the live updates.

At stake are the political fortunes of a number of leaders, including Chief Minister Shivraj Singh Chouhan, former chief ministers Kamal Nath and Digvijaya Singh, Union Minister Narendra Singh Tomar, and last but not the least Jyotiraditya Scindia.

The by-polls on most of the 28 seats were necessitated following Scindia's revolt against the Kamal Nath government in March this year. The rebellion by Scindia, one of Congress party's prominent youth leaders, resulted in the collapse of the Kamal Nath government as 23 of his loyalists tendered their resignation and joined the BJP along with him.

Shivraj Singh Chouhan currently has the support of 107 BJP MLAs and he will be hoping to get at least 9 more to got past the halfway mark. The Congress, on the other hand, has 88 MLAs and the party needs to win all the 28 seats to secure a majority on its own. However, if the Grand Old Party manages to win 23 seats, it will have chances of forming the government with the help of four independents and two BSP MLAs, who are currently supporting the BJP but were with Kamal Nath before his government fell.