Bengaluru | Jagran News Desk: BS Yediyurappa-led BJP is all set to retain power in Karnataka as the party has won six seat and is leading on six others while the Congress and the JD(S) is leading on just two seats while independent candidate maintaing lead in Hoskote.

The elections on the 15 Assembly seats were held on December 5 after the legislators resigned in July, triggering the collapse of the Congress-JDS coalition and paving the way for the BJP to come to power. The resignations tendered by the MLAs reduced the majority mark in the 224-strong Assembly to 104 and thus paving the way for the BJP -- with 105 MLAs -- to form the government in the state.

Here are the LIVE updates on the Karnataka bypoll results:

15:47 pm: As a leader of legislative party, I need to respect democracy. I have resigned as Congress Legislative Party leader. I have submitted my resignation to Sonia Gandhi Ji: Siddaramaiah

15:17 pm: Siddaramaiah (Congress) and H D Kumaraswamy (JDS) had created a narrative of 'disqualified MLAs' to discredit our candidates, but today the Congress and the JD(S) have been disqualified in the people's court and have given a verdict of 'Qualified' to our candidates: BJP's state chief Nalin Kumar Kateel

14:43 pm: BJP candidates have been declared as winners from the Yellapur, Ranibennur, Vijayanagara, Krishnarajapete and Chikkaballapur constituencies.

14:08 pm: The ruling BJP on Monday retained majority in the Karnataka Assembly when it bagged six seats in the byelections in which it was also leading in an equal number in other segments where counting is underway.

14:03 pm: "Our party is ahead of the opposition Congress in a dozen seats and trailing behind it only in two seats and an Independent in one seat after 10 rounds of vote count in all the 15 Assembly segments," says BJP's state unit spokesman G Madusudhan

13:55 pm: "The BJP has won Yellapur and Chikkaballapur seats and is leading in 10 seats, while the Congress is ahead in 2 seats and an Independent leading in one seat. The regional party Janata Dal-Secular (JD-S) is trailing behind both the national parties," IANS quoted a poll official as saying.

13:28 pm: ‘People have taught them a lesson’: PM Modi’s scathing attack at Cong on K’taka bypolls

13:07 pm: I am happy that people have given a very good verdict. Now, without any problem we can give a pro-people and a stable government: Karnataka CM BS Yediyurappa

13:00 pm: The ruling BJP on Monday bagged four seats and was leading in eight others as the B S Yediyurappa-led government appeared on course to sweep the bypolls in 15 constituencies and retain a majority.

12:34 pm: In the assembly with the current strength of 208 after the disqualifications, BJP has 105 MLAs (including an independent), the Congress 66 and the JD(S) has 34 MLAs.

12:00 pm: A two-time Congress MLA from Yellapur, Hebbar was among 13 disqualified MLA whom the BJP had given ticket to contest the bypoll as party candidate.

11:46 am:  BJP candidate from Yellapur Arabail Shivaram Hebbar became the first candidate to register a victory in the bypolls to 15 assembly constituencies. He defeated Congress' Bhimanna Naik by a margin of over 31,000 votes, poll officials -- quoted by PTI -- said.

11:33 am: Karnataka Chief Minister BS Yediyurappa celebrates with his son BY Vijayendra as BJP leads on 12 out of 15 seats. 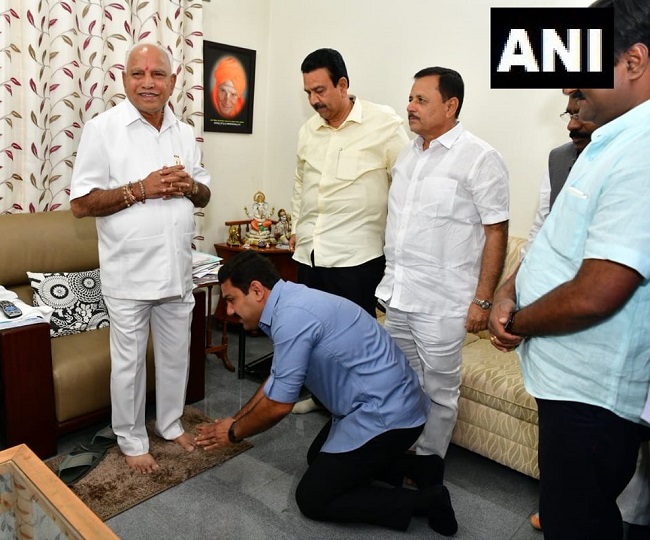 11:27 am: BJP candidate Narayana Gowda has taken a lead of 1,403 votes in K R Pete against Congress' B L Devaraj, who was ahead in the initial rounds.

11:07 am: The BJP need to win at least seven seats to claim a majority in the assembly, which will have 222 members after the bypolls.

10:39 am: "We have to agree with the mandate of the voters of these 15 constituencies. People have accepted the defectors. We have accepted defeat, I don't think we have to be disheartened," says Congress' DK Shivakumar

10:24 am: The bypolls were held to fill vacancies caused by the disqualification of 17 rebel Congress and JD(S) MLAs, whose revolt led to collapse of the H D Kumaraswamy-led coalition government in July.

10:09 am: Congress nominees H P Manjunath (Hunsur) and Rizwan Arshad (Shivajinagar) were leading; JD(S)' B L Devaraj and Javarayi Gowda were ahead in K R Pete and Yeshwanthpura respectively.

9:27 am: The ruling BJP has taken an early lead in 10 out of 15 Assembly constituencies that went for bypolls on December five, as the counting of votes was taken up on Monday, election officials said.

9:10 am: Counting underway for Karnataka Bypolls; visuals from a counting center at Mount Carmel College. 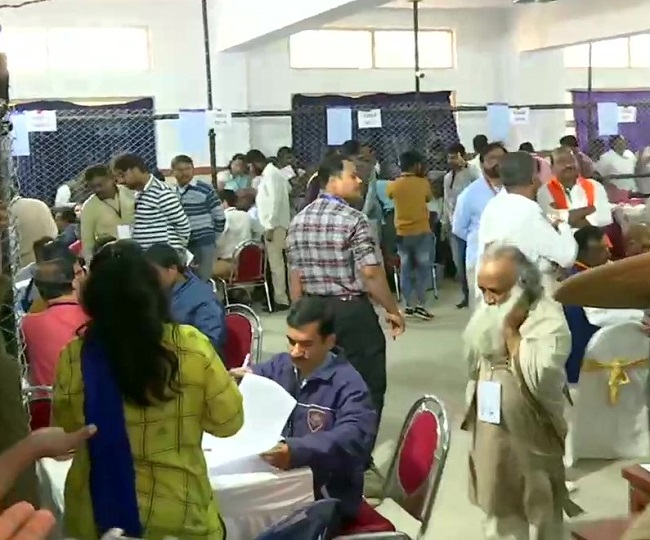 9:00 am: BJP leading in Yellapur, Chikkaballapur constituencies, Congress leading in Shivajinagar and Hunasuru constitiencies and JDS leading in KR Pete, according to official EC trends

8:35 am: In Shivajinagar constituency, Rizwan Arshad from Congress is leading.

8:20 am: Congress and BJP leading in one seat each, as per Election Commission; Counting is underway in 15 assembly seats.

8:00 am: Counting of votes begins at 15 counting stations.