Ranchi | Jagran News Desk: The first phase of the polling in Jharkhand ended with a turnout of 62.87 per cent on Saturday. The percentage is likely to increase as voters who entered the polling stations by 3 pm will be allowed to exercise their franchise, reported news agency PTI. Meanwhile, minor incidents of violence were reported in the state.

The first phase of polling for the Jharkhand Assembly election began today at 7.00 am. The polling will be held in 13 constituencies. The seats where the polling will take place are Chatra, Gumla, Bishunpur, Lohardaga, Manika, Latehar, Panki, Daltonganj, Bishrampur, Chhatarpur, Hussainabad, Garhwa and Bhawanathpur.

The ruling BJP is contesting on 12 seats in the first phase while the opposition alliance of the Congress, RJD and the JMM is contesting in six, three and four seats, respectively.

Here are the highlights on first phase of Jharkhand Assembly Polls 2019:

16:30 pm: Electronic Voting Machines (EVMs) and VVPATs being packed at a polling booth in Lohardaga, as voting for the first phase of Jharkhand Assembly Polls concludes. 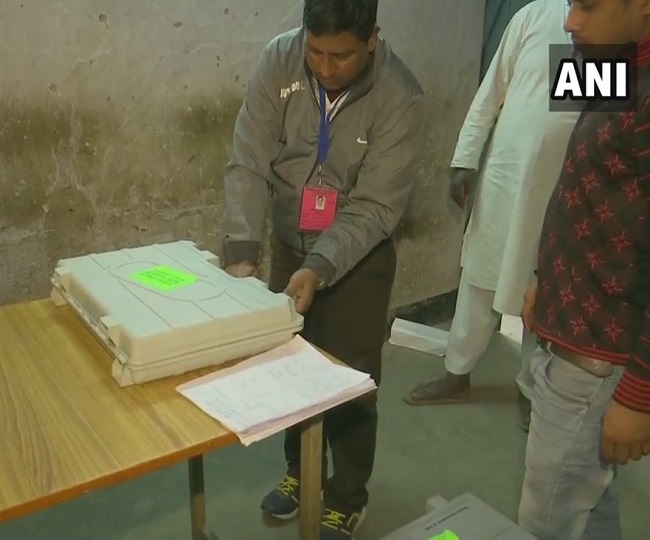 16:10 pm: An estimated 62.87 per cent votes were cast when voting ended at 3 pm on Saturday in the first of the five-phase Jharkhand assembly elections in 13 constituencies, amid sporadic incidents of violence, officials said. The percentage is likely to increase as voters who entered the polling stations by 3 pm will be allowed to exercise their franchise, they said.

15:30 pm: Voting to 13 constituencies in Jharkhand is scheduled to end at 3 pm. 46.83 percent voter turnout was recorded till 1 pm. BJP is contesting against the alliance of Congress, JMM and RJD. 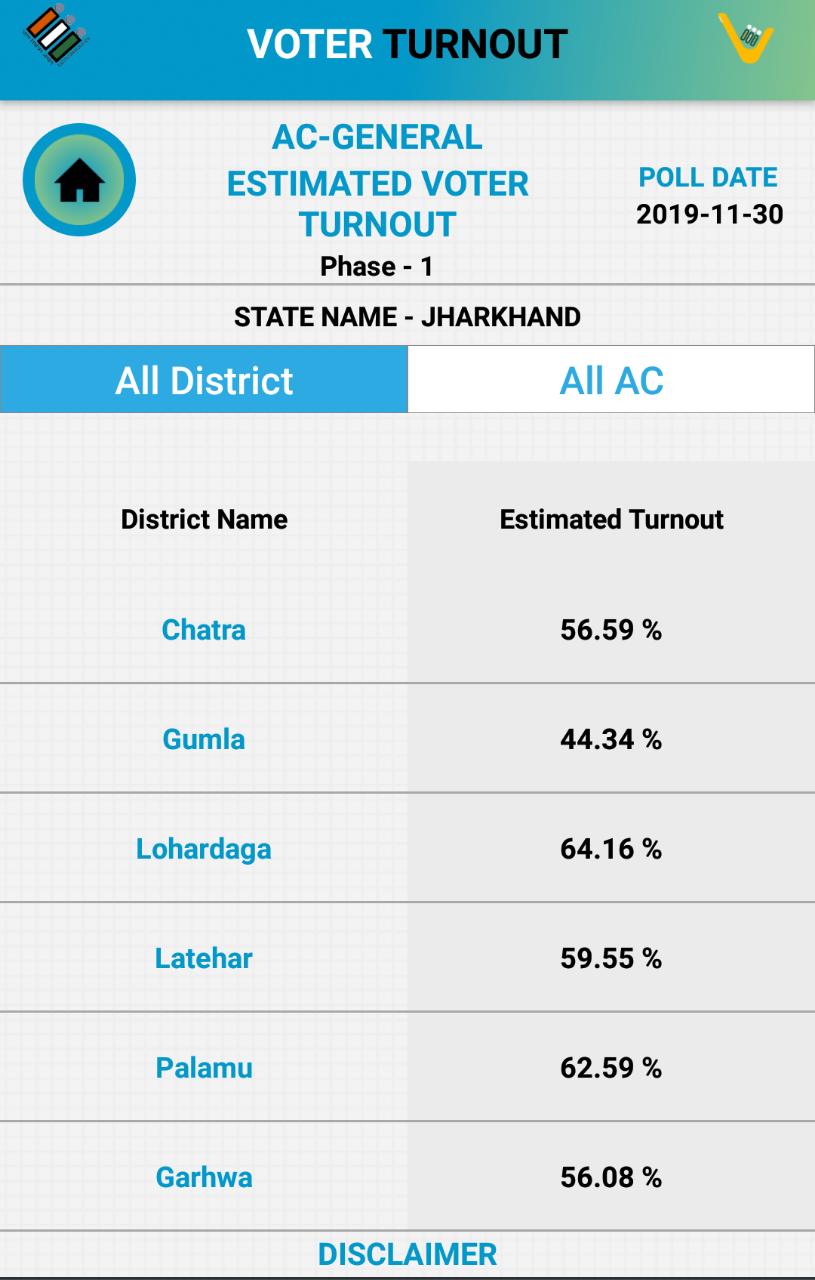 14:20 pm: Around 46.83 per cent votes were cast till 1 pm on Saturday in the first phase of Jharkhand assembly elections in 13 constituencies, amid sporadic incidents of violence in some districts.

14:10 pm: People cast their votes at a polling booth in Lohardaga. 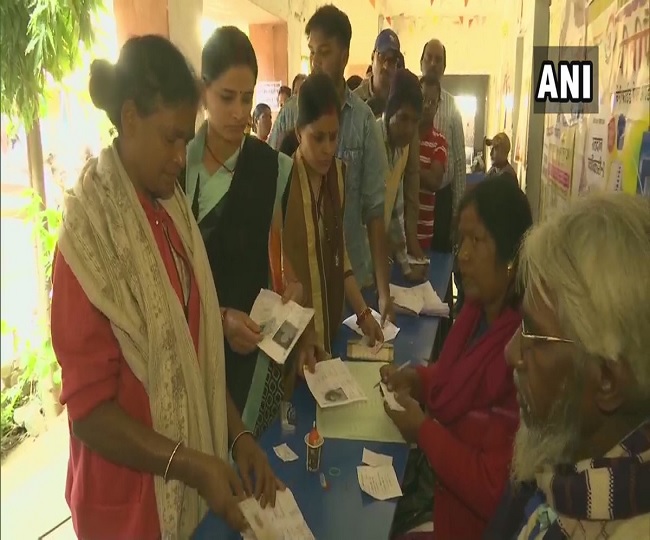 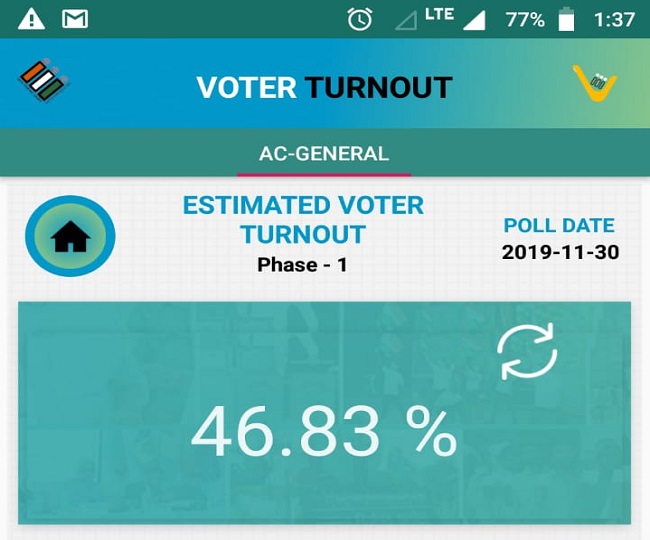 13:21 pm: Queues of voters outside a polling booth in naxal affected area of Kanhachatti in Chatra district. 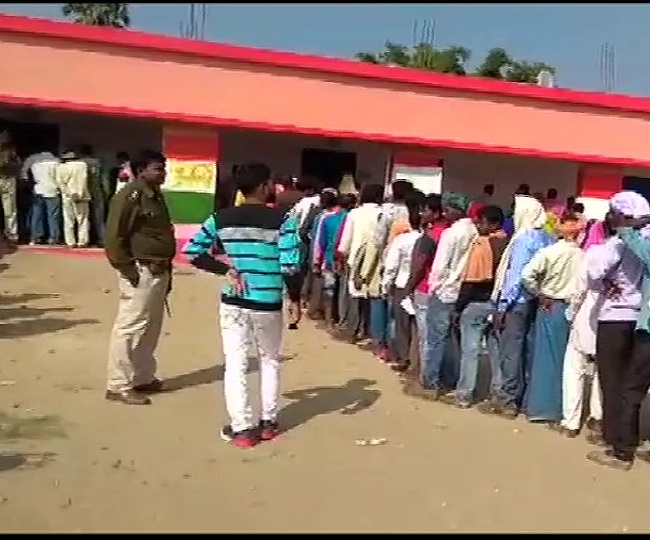 13:15 pm: Amid polling for the first phase in Jharkhand, clashes between BJP and Congress supporters have been reported from Kosiyara village of Chainpur, reported news agency IANS.

12:45 pm: At least 18 political leaders with significant clout in their respective constituencies have switched parties after being denied Assembly poll tickets in Jharkhand - a record in the state's 19-year history. Putting behind their political ideologies, several leaders including three former state Congress chiefs have switched over to rival camps in the run-up to the polls.

12:00 pm: People cast their votes at a polling booth in Chatra. 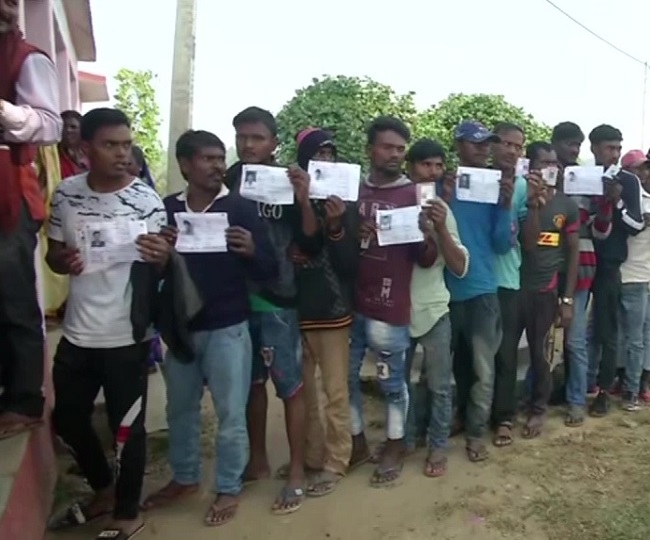 11:45 pm: 27.41 per cent voting recorded till 11 am. Voting on 13 constituencies in the state for the first phase of elections is underway.

11:37 am: "Phase 1 of the Jharkhand elections is in progress. I urge those whose constituencies go to the polls today to vote in large numbers and enrich the festival of democracy," said PM Modi 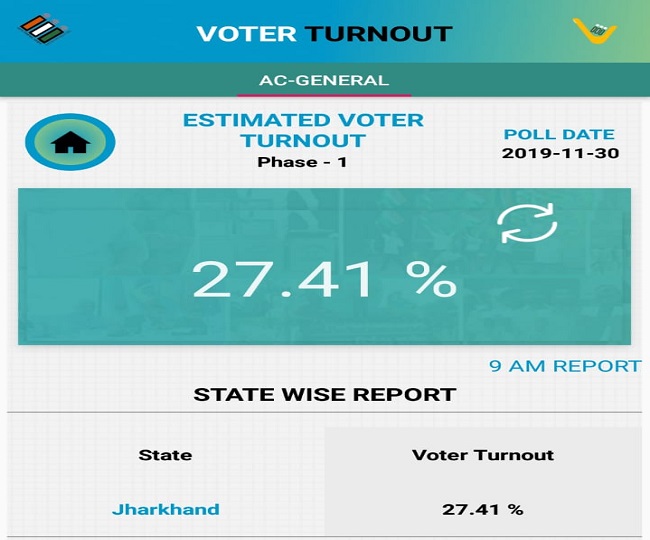 10:56 am: The BJP is seeking a second straight win under the leadership of Chief Minister Raghubar Das.

10:29 am: Additional Director General of Police and state police Nodal Officer Murari Lal Meena said a total of 1,097 polling stations in Naxal-affected areas were marked as hypersensitive and 461 polling stations as sensitive.

10:12 am: As the first of the five-phase polling began in 13 assembly constituencies in Jharkhand on Saturday, voters in Lohargada and Daltonganj are concerned on the issues of development and unemployment, reports ANI

9:39 am: Naxals blow up bridge in Gumla district, police says voting not affected 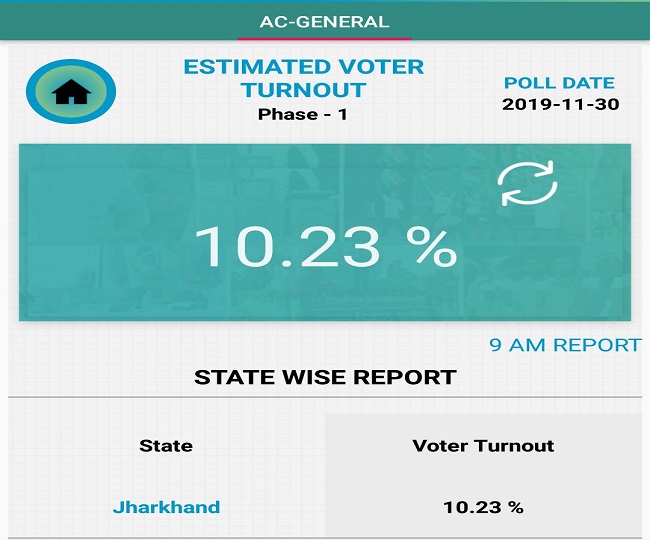 9:00 am: The campaigning in Jharkhand ended on Thursday for the first phase of polling to be held on Saturday in 13 assembly constituencies.

8:41 am: This is the fourth assembly election in Jharkhand since 2000 when the state was carved out Bihar.

8:05 am: Voting continues at a polling booth in a government school in Lohardaga. 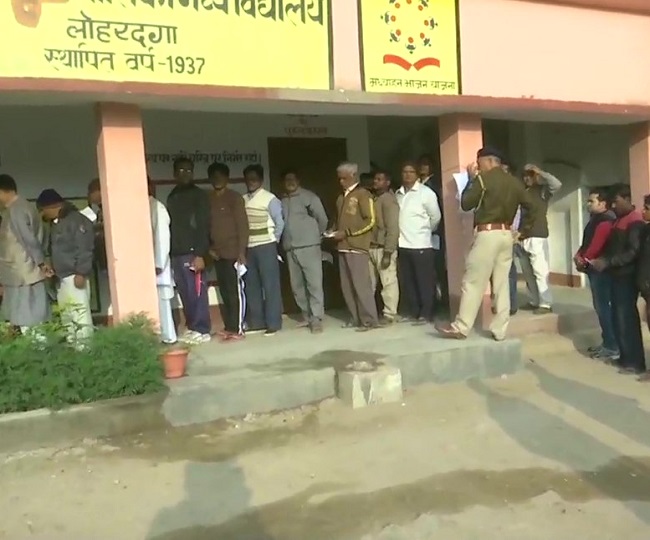 7:49 am: "To form a stable government and to make Jharkhand free from corruption and Naxalism, a government elected by majority needs to be formed. I appeal to all the voters voting in the first phase to contribute to keep Jharkhand on the path of development by voting in maximum numbers," says Home Minister Amit Shah

7:40 am: JMM, Congress and RJD is contesting in four, six and three constituencies, respectively.

7:22 am: "Today is the first phase of Jharkhand Assembly Polls. I appeal to all to vote in large numbers. Your one vote is important for the development of the state," says CM Raghubar Das. 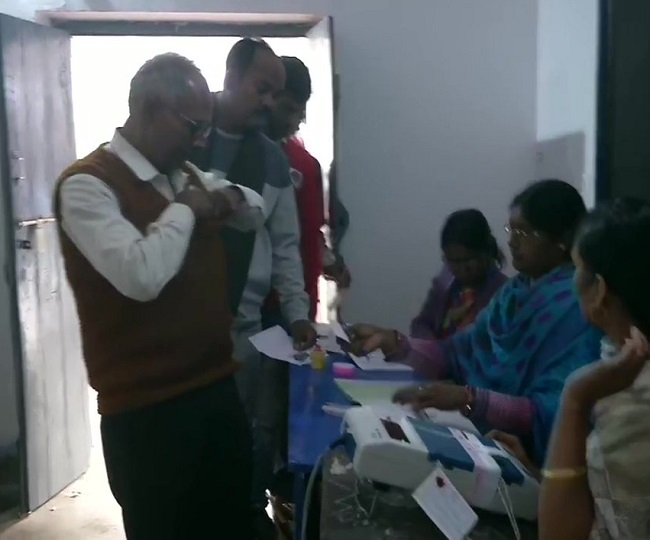 7:11 am: Security officials outside a polling booth in Jharkhand. 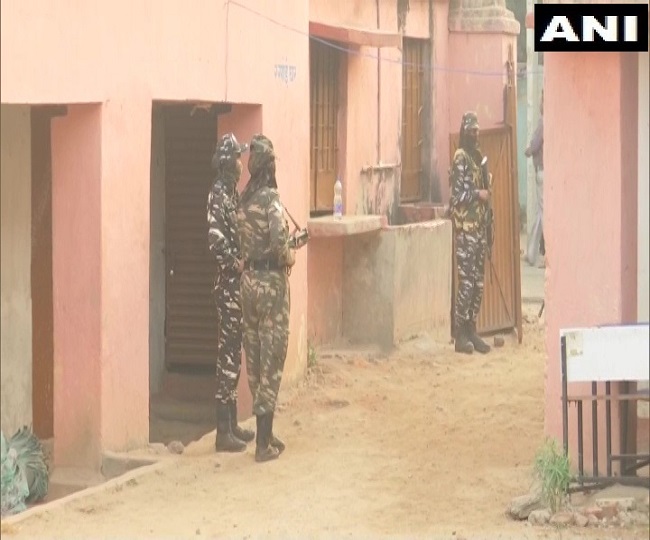 6:55 am: Outside visuals from a polling booths in Lohardaga, ahead of the voting for Assembly elections. Voting on 13 constituencies in the state for the first phase of elections will be held today 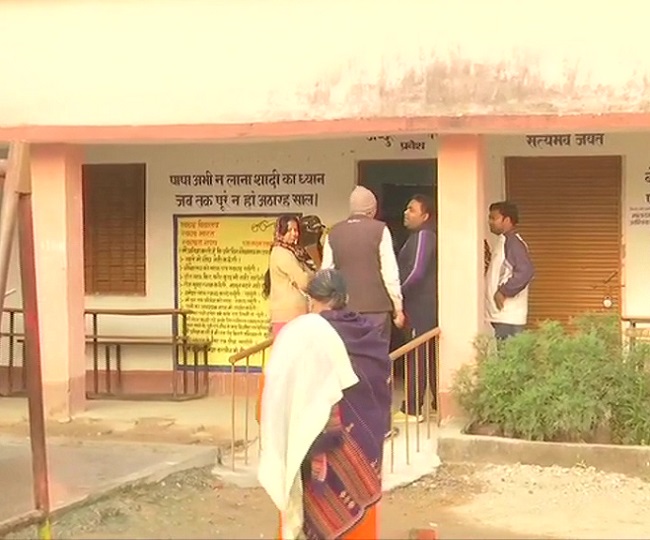 6:50 am: ‘We have buried Naxalism 20-feet under earth in Jharkhand’: Amit Shah

6:49 am: ‘Naxalism an issue due to political instability, need to give stable govt here’: PM Modi

6:42 am: According to the schedule released by the EC, elections in Jharkhand will be held in five phases, starting from November 30 till 20 December. The results for the five phases of elections will be declared on December 23.

6:37 am: In the first phase of Jharkhand Assembly elections, the ruling BJP is contesting on 12 seats.

6:36 am: The voting in the 13 constituencies will take place across 3,906 polling stations out of which 989 will have webcasting facilities.

6:35 am: In the first phase, 13 constituencies across six districts will be going to polls today.