Congress has said that it will contest 31 seats out of 81 in the Jharkhand assembly election.

New Delhi | Jagran News Desk: The Congress party on Sunday released its first list of five candidates for the Jharkhand assembly polls-- set to begin on November 30-- and has fielded its state unit chief Rameshwar Oraon from Lohardaga. The voting will be carried out in five phases in the state with first on November 30 and the last on December 20.

The party has said that it will contest 31 seats out of 81 in Jharkhand assembly election. The first candidates are from the seats that will go to the polls on November 30. 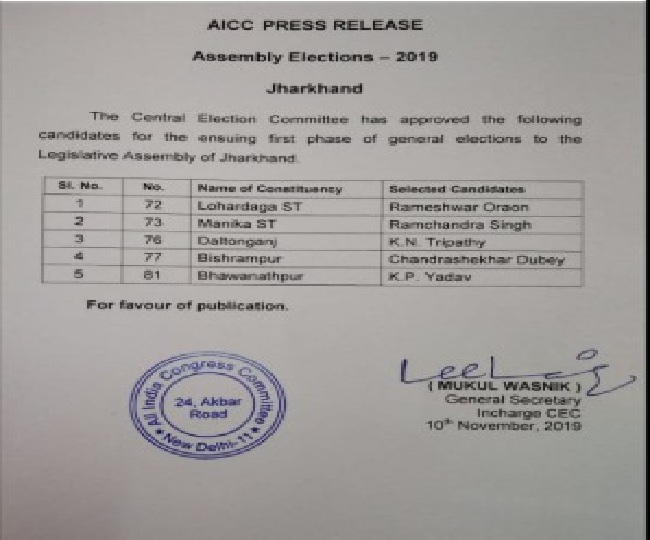 In the first phase, JMM will contest from seats such as Gumla, Latehar, Garhwa, Bishunpur while Congress will fight on Bhawanthpur, Daltonganj, Bishrampur, Panki, Monika and Lohardaga. Three seats Chattarpur, Hussainabad and Chattra have been left for RJD.

37 out of 81 assembly seats have been reserved for the Scheduled Castes (SC) and Scheduled Tribes (ST).
Meanwhile, The RJD has said it will contest on seven seats. The largest share of the alliance share has gone to the JMM, which will contest on 43 seats.

November 13 is the last date of filing nominations. The results will be declared on December 23.

As of now, the state is ruled by the BJP that had emerged as the single largest with 43 seats in the 2014 assembly election. Back then, JMM had won 19 seats while JVM(P) had managed to win eight seats. The ruling-BJP will be looking forward to come into power by winning maximum number of seats in upcoming polls.