Jharkhand Assembly Elections 2019 | Voting for third phase on 17 constituencies wind up with 62.40 per cent voter turnout

New Delhi | Jagran News Desk: The third phase of the polling for the 17 Assembly constituencies in Jharkhand ended on Thursday at 5 pm with 62.40 per cent of voter turnout, according to the Election Commission website. The polling started at 7.00 am and ended at 3.00 pm in 12 constituencies while on the remaining five constituencies, the voting ended at 5.00 pm with no incident of violence reported throughout the day. 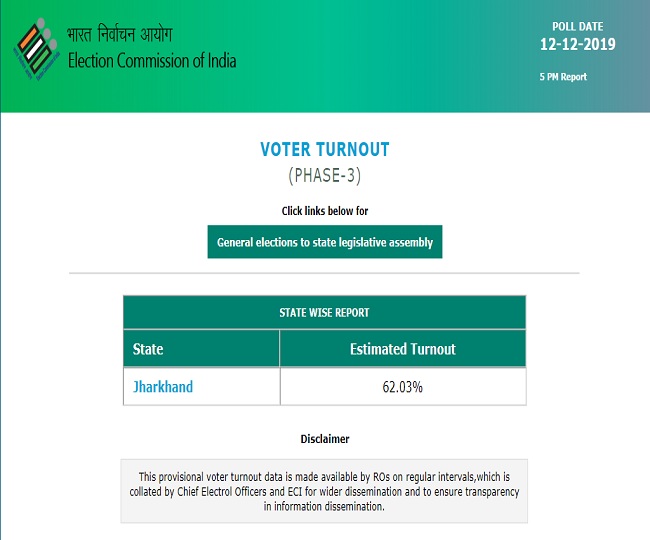 More than 35,000 security personnel have were deployed to ensure peaceful polling.

Congress leader Rahul Gandhi in the poll campaign on Thursday promised to waive farm loan up to Rs 2 lakh and procure paddy at Rs 2,500 MSP if the opposition alliance came to power in Jharkhand like done in Chhattisgarh, Madhya Pradesh and Rajasthan. Gandhi addressed two election meetings at Rajmahal and Mahagama in the poll-bound Jharkhand during the day in favour of the opposition coalition comprising the Congress, JMM, and the RJD.

Apart from Rahul Gandhi, Prime Minister Narendra Modi also addressed a rally in Jharkhand’s Dhanbad and said that the tradition and culture of the people of the northeast will not be affected with the bill and accused the Congress of misleading the people of the country.

Addressing a rally in Jharkhand’s Dhanbad, PM Modi said that some people are trying to fuel the tensions in the northeast region and the politics of Congress depend on illegal immigrants.

In the third phase, there is a total of 309 candidates including 32 females whose fate was sealed by 56,06,743 voters including 26,73,991 female and 95 third gender. In the third phase, the key candidates are three ministers- CP Singh, Ramchandra Sahis and Neera Yadav, Former Chief Minister Babulal Marandi and former Deputy Chief Minister and All Jharkhand Students Union (AJSU) president Sudesh Mahto.

Of the 17 seats, BJP, JMM, and Congress had won 10, three and two seats, respectively, in the 2014 Assembly elections. There is a direct fight between the BJP, the Congress and the JMM on seven seats. In Silli, the fight is between AJSU President Sudesh Mahto and sitting JMM legislator Seema Devi. There is a triangular fight on the other six seats.