The people will exercise their franchise between 7 am and 5 pm in Jamshedpur (East) and Jamshedpur (West) constituencies, while in the rest 18 the time to do so would end at 3 pm, an EC release said.

Ranchi | Jagran News Desk: Voting for the second phase in 20 seats of Jharkhand Legislative Assembly culminated with 62.40 per cent of voter turnout. Voting on 18 seats was concluded at 3 pm, while on Jamshedpur East and West seat voting ended at 5 pm. Maximum 68.6 per cent voters exercised their franchise in Gumla's Sisai assembly seat. Outrageous voters pelted stones at polling booths during voting at booth number 36 of the Sisai assembly, which led to police firing and uproar.

During this time, a young man Jilani Ansari was killed in the shootout. Many policemen have also been injured in stone-pelting. The Election Commission has canceled the voting at booth number 36 and directed re-polling on the seat.

The results will be declared on December 23 which will decide the fate of leaders like Chief Minister Raghubar Das, Speaker Dinesh Oraon and ministers Neelkanth Singh Munda and Ramchandra Sahis. In the first phase of the Jharkhand Assembly Elections, 62.87 % of voter turnout was recorded at the end of voting.

Here are the Highlights of the second phase of polling for the Assembly Elections in Jharkhand: 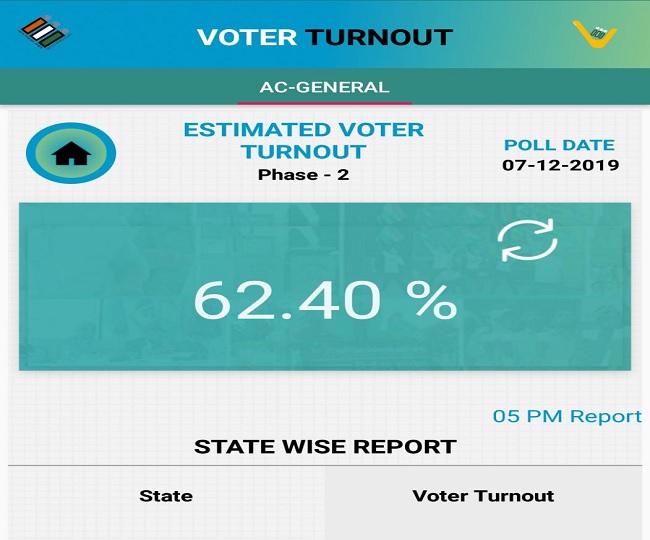 4:25 pm: The 20 seats in the second phase of the Jharkhand assembly saw 59.27 percent voting till 3 pm. According to the Election Commission, the voting of voters standing in queues at the booths is still going on. The final figure will be released after matching at 6 pm. Sisai assembly seat of Gumla, which came under limelight due to police firing in the morning, has recorded the highest turnout. A record 68.6 percent of voters in Sisai have exercised their franchise. Bahragowda, the seat of BJP candidate Kunal Shadangi, who left the JMM and joined BJP, got 68.38 percent voting.

4:00 pm: 59.27 per cent votes were cast till 3 pm in the second phase of Jharkhand assembly elections in 20 constituencies. Polling in 18 seats ended at 3 pm, while voters in Jamshedpur (East) — where Chief Minister Raghubar Das is in fray — and Jamshedpur (West) constituencies can exercise their franchise till 5 pm. 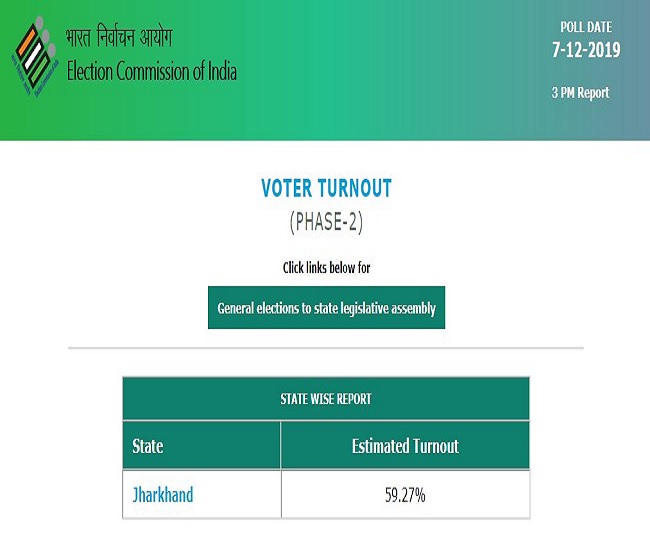 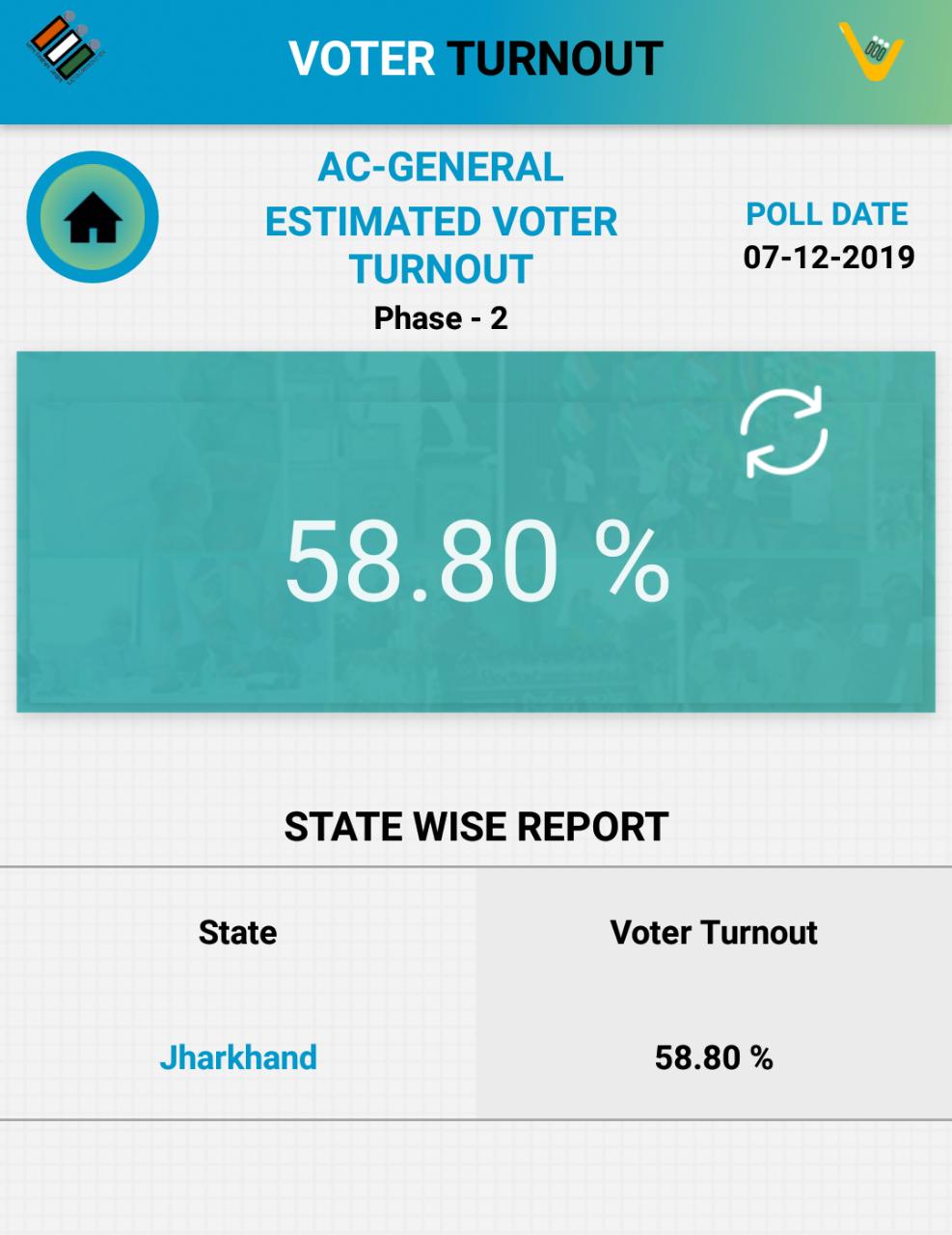 3:00 pm: Jharkhand CM Raghubar Das after casting his vote in the 2nd phase of Assembly polls: I appeal to the people of the state to participate in this festival of democracy. I believe we have been successful in establishing a better govt in last 5 years for which we will be rewarded.

2:30 pm: The voting turnout in Jharkhand assembly seats till 2 pm are as follows:

2:15 pm: Polling suspended after one killed in clash between police and villagers in Gumla’s Sisai

1:30 pm: The Jharkhand Mukti Morcha has complained to the Election Commission about violence during voting in the second phase of Jharkhand Assembly elections. The JMM has sent a letter to the Commission complaining of police firing and violence during voting in Gumla's Sisai. Party General Secretary Supriyo Bhattacharya has raised a strong objection to throw sticks at the voters standing in the queue here and then firing at the angry voters. 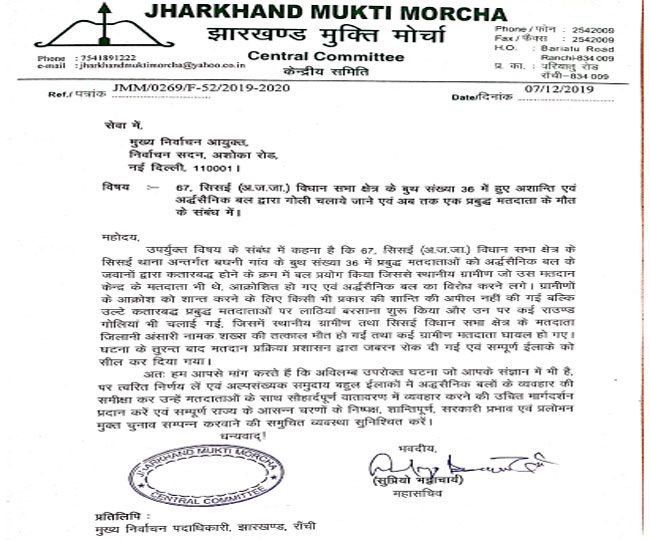 1:15 am: The voting turnout in Jharkhand assembly seats till 1 pm are as follows: 12:30 pm: Voting has been suspended following the death of a young man in police firing in Sisai, Mala. According to the latest information, the policemen have left the village with EVMs. According to the commission, voting was to be held here till 3 pm, but after violent clashes, the voting was stopped here at 12 pm. Additional Election Officer of the State Election Commission, Shailesh Kumar Chaurasia has confirmed the death of a youth in the firing. Several policemen have been injured in violent clashes here.

12:00 pm: Voting is going on in 20 seats in the second phase of the Jharkhand assembly elections being held in five phases. Here 48 lakh voters are deciding the fate of 260 candidates, including 231 male and 29 female candidates at 6066 polling stations. According to the Election Commission, Jamshedpur East and West constituencies have maximum 20 candidates in the fray. Only 7 candidates are contesting in Seraikela. Jamshedpur West is the largest constituency by voters, while Jagannathpur is the smallest assembly constituency. 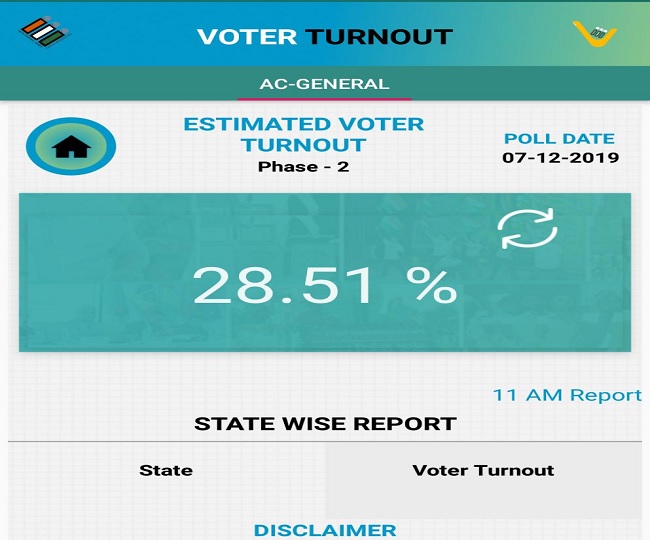 11:00 am: One person was injured in the incident of firing in Gumla district. The Rapid Action Force personnel opened fire after a group of men tried to snatch their weapons from them near booth number 36 in Sisai constituency, according to News18 sources

10:30 am: Indo-Tibetan Border Police: Firing reported on a polling booth in Gumla district, Govt vehicle of Block Development Officer, Sisai also fired upon. CRPF team has rushed to the spot.

10:05 am: Saraikela-Kharswan district registers highest voter turnout of 14.81 per cent till 10 am, according to Voter Turnout App. 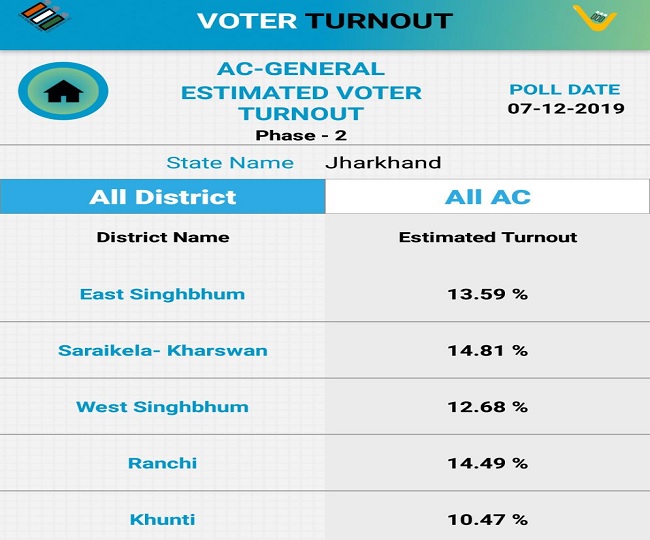 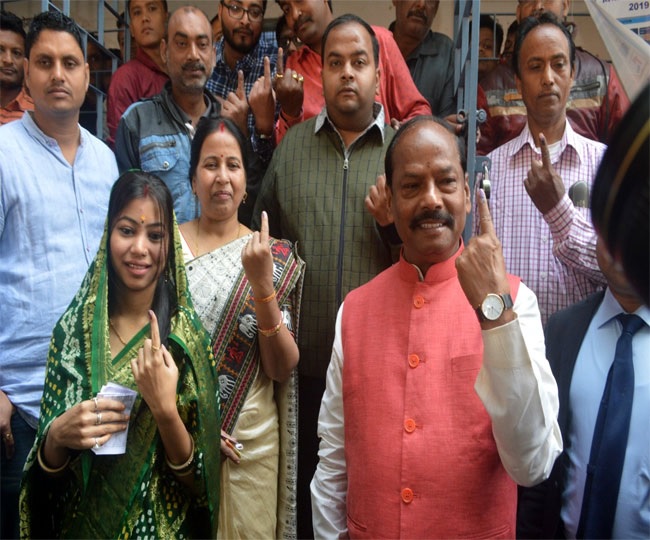 9:00 am: Polling at booth numbers 125 and 126 in Simdega district of Jharkhand is going on in dark as there is no electricity in the area. Lack of preparedness from the side of authorities has caused problems for the people casting their votes.

8:55 am: Laxman Giluva, BJP state president casts his vote from Booth no. 74 in Chakradharpur's Toklo. Saryu Rai, an independent candidate from Jamshedpur also votes from Booth no. 155 at KMPM Vocational College.

8:50 am: Several EVMs were reported malfunctioned while many pooling stations were without electricity. In Jamshedpur East constituency in Jharkhand polling hasn't started on polling booth number 21.

8:45 am: A total of 1,016 polling stations are located in towns and cities while 5,050 are in rural areas. Webcasting facilities has been made available at 1,662 polling stations, the CEO said.

8:37 am: Out of a total of 6,066 polling stations, 949 have been declared 'critical' and 762 sensitives' in Naxal-affected areas, he said. The CEO said that 101 polling stations have been relocated due to security reasons and free transport facility has been arranged for voters to reach these stations to exercise their franchise.

8:30 am: People cast their votes in the second phase of elections in Jharkhand 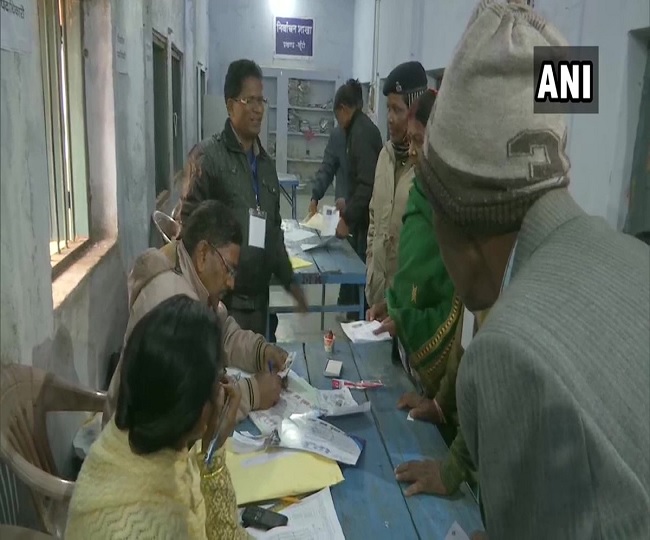 8:25 am: Voting on 18 seats out of 20 seats will end at 3 pm, while on East Jamshedpur and West Jamshedpur seats, the voting will culminate at 5 pm.

8:15 am: The first phase of Jharkhand Assembly Elections ended with a total of 62.87 voter turnout with minor clashes at some polling stations.

8:00 am: Jharkhand Assembly Elections 2019: Second phase of polling to be held today amid tight security

7:50 am: The second phase will decide the fate of leaders like Chief Minister Raghubar Das, Speaker Dinesh Oraon and ministers Neelkanth Singh Munda and Ramchandra Sahis.

7:40 am: Jharkhand: People queue up to cast their votes at a polling station in Khunti during the second phase of voting for assembly elections. 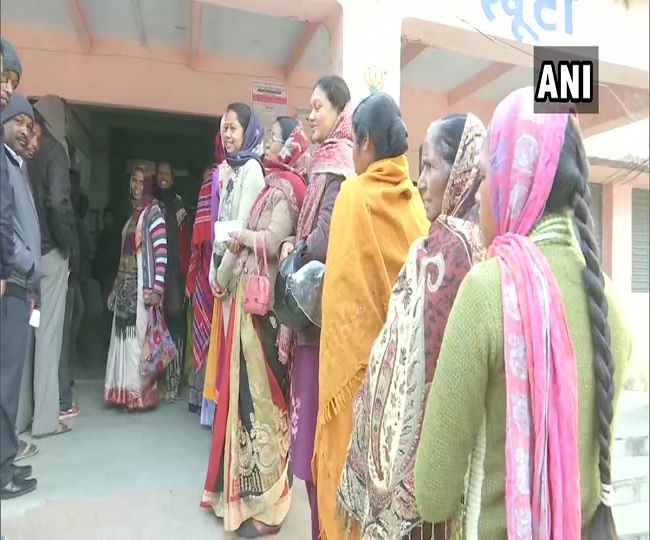 7:22 am: Prime Minister Narendra Modi urged the residents of Jharkhand to come out in large numbers to exercise the voting right. He tweeted, "Today is the second round of voting in Jharkhand assembly elections. I urge all voters to make this festival of democracy successful by voting in maximum numbers".

7:07 am: People cast their votes at a polling station in Chaibasa as the state undergoes second phase of assembly elections today 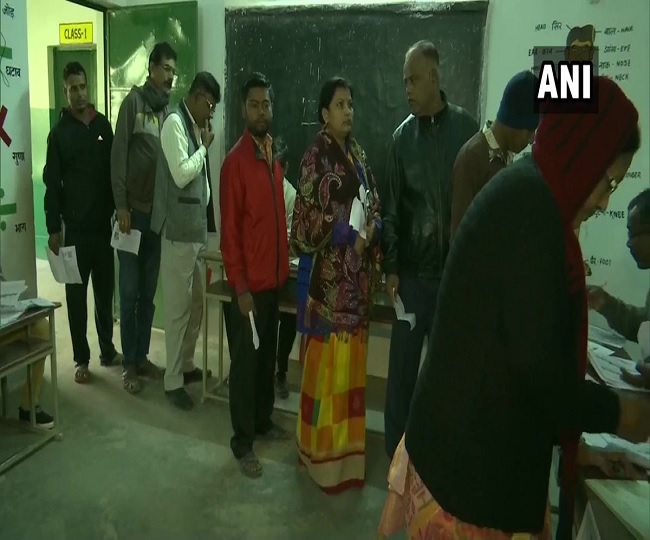 7:00 am: Voting for the second phase of #JharkhandAssemblyPolls begins. 20 assembly constituencies of the state are undergoing polling today.

6:55 am: Voting for 2nd phase of assembly elections to be held in the state today. Visuals from a polling centre in Chaibasa. 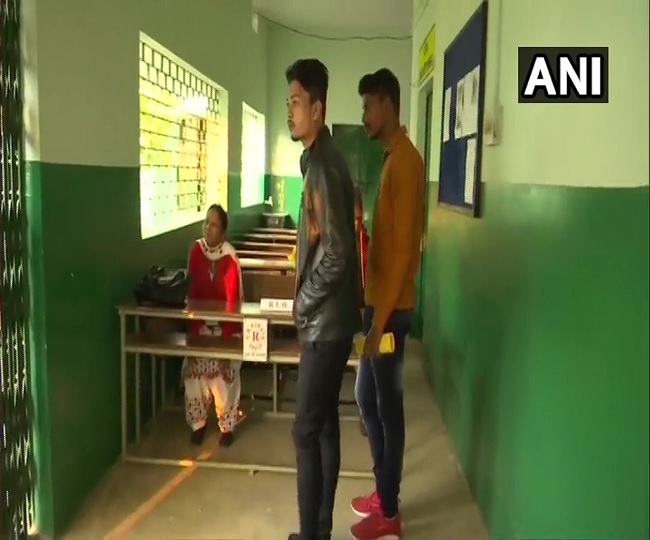 6:50 am: Voting for the second phase of assembly elections to be held in the state today. Visuals from a polling station in Khunti. 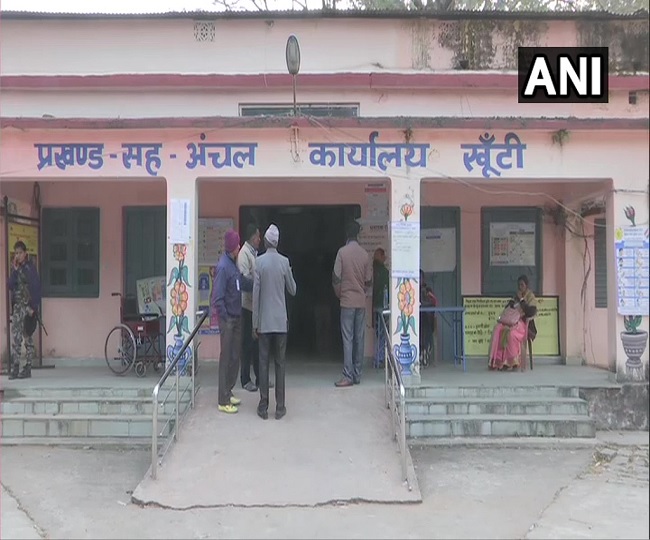 6:45 am: Jharkhand to undergo the second phase of assembly elections today. Latest visuals from the polling center at KMPM Vocational College in Jamshedpur. 20 assembly constituencies of the state will undergo polling today. 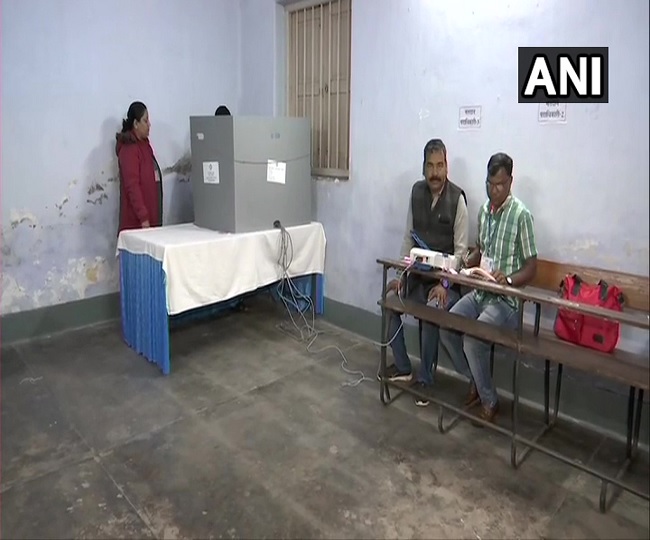