Haryana Assembly Elections 2019 Results LIVE: According to the official data, the BJP has won 15 seats while the Congress has won 12 seats.

New Delhi | Jagran News Desk: Haryana BJP chief Subhash Barala has dismissed the reports of his resignation saying that they were 'rumours'. The BJP has suffered a major setback in the state as the party was expecting to retain the state on its own. The exit polls -- which were broadcast soon after the polling ended on Monday -- also predicted a thumping victory for the BJP. According to the exit polls, the BJP will outshine its rivals Congress, JJP and the INLD and will win around 67-68 seats. The exit polls have predicted that the Congress will around 12-13 seats and the remaining 10-11 seats are expected to be won by Others.

Meanwhile, former Haryana Chief Minister and senior Congress leader Bhupinder Singh Hooda has called for a Congress-JJP-INLD alliance in the state to keep the BJP out of the power. "The time has come for Congress, JJP, INLD, and independents to come together to form a strong government. I assure that each one will be respected and given a respectable position," Hooda said on Thursday.

In the 2014 assembly polls, the BJP for the first time came to power in Haryana winning 47 seats. It won the Jind bypolls earlier this year, taking its total strength in the state assembly to 48. Meanwhile, the INLD has 19 MLAs and the Congress has 17.

Also Read
Kerala Assembly Elections 2021: Polling to be held in 1 phase on April 6,..

18:35 pm: "I thank the people of Haryana for blessing us. We will continue to work with the same zeal and dedication for the state’s progress. I laud the efforts of hardworking @BJP4Haryana Karyakartas who toiled extensively and went among the people to elaborate on our development agenda," tweets PM Modi. 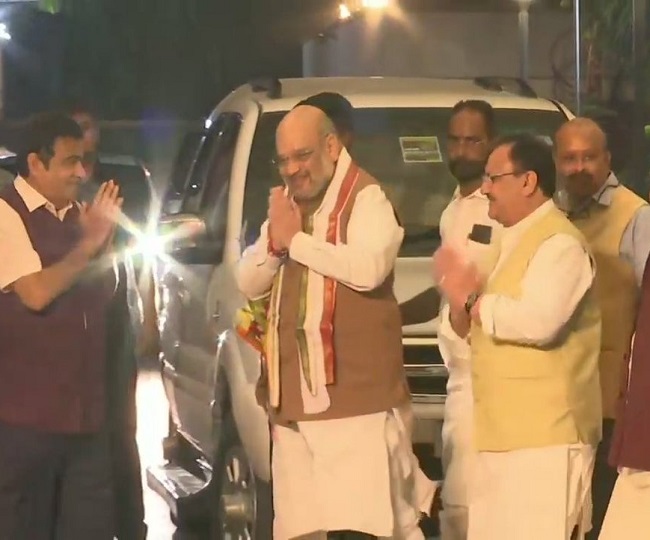 18:03 pm: Voters have made BJP largest party in Haryana and given it another opportunity to serve them: BJP president Amit Shah. 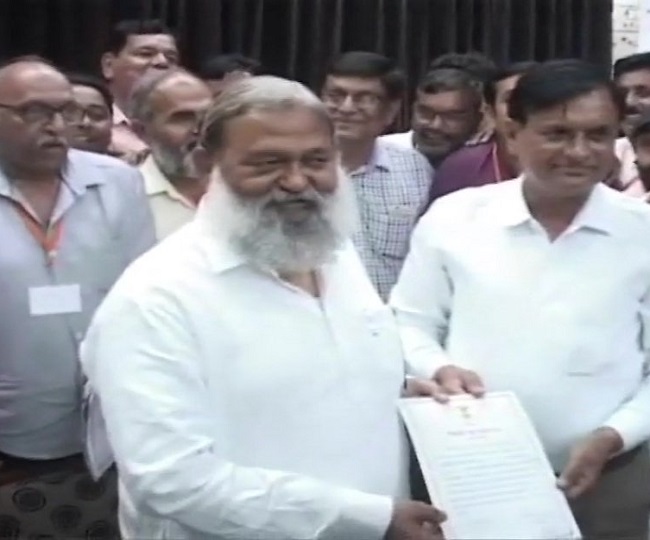 17:03 pm: Congress leader Bhupinder Singh Hooda after winning from Garhi Sampla Kiloi Assembly Constituency: Mandate is against the current govt of Haryana, & all parties should come together to form a strong government whether it's JJP, BSP, INLD or independent candidates. 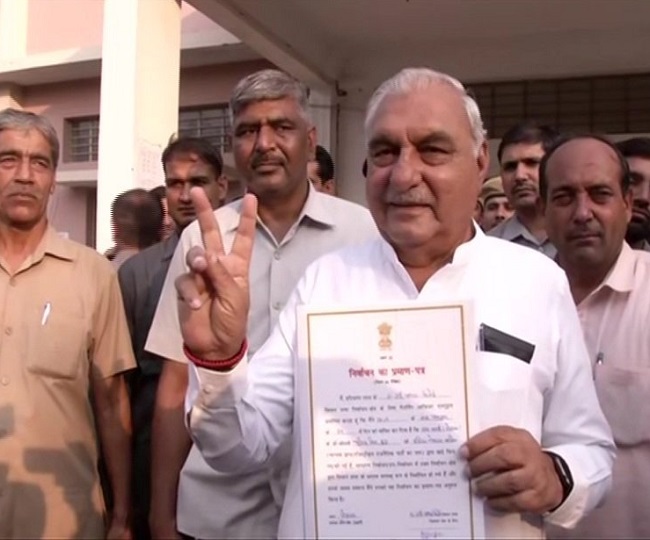 16:30 pm: "The election results are yet to come. The trends that are coming indicate that the BJP will form the government in Haryana once again. We respect the mandate. The workers have done the hard work," said BJP leader and Haryana Minister Captain Abhimanyu.

15:53 pm: Haryana Assembly Elections | ‘Save this tweet’: When Deependra Hooda predicted the fall of Khattar govt

15:36 pm: "I thank people who supported me. The kind of respect they gave me, I am thankful for it. People trust the work by BJP and that's why they vote for the party," says Babita Phogat. 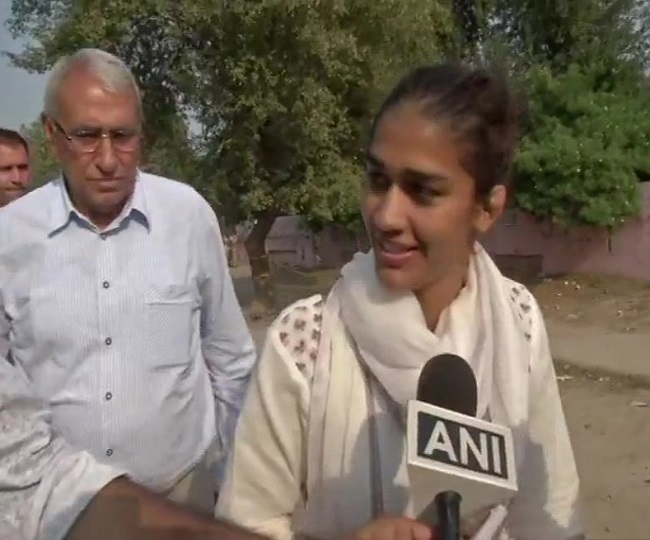 14:45 pm: BJP's Haryana chief Subhash Barala says that he has not resigned from his post and that the news of his resignation is a rumour.

14:22 pm: As per the official data, the BJP is leading on 39 seats while Congress is ahead on 33 seats. Meanwhile, the JJP has won on 4 seats and is leading on 6 seats.

13:43 pm: The BJP and Congress are witnessing a neck-and-neck fight in the Haryana Assembly elections, according to the official trends released by the Election Commission of India. 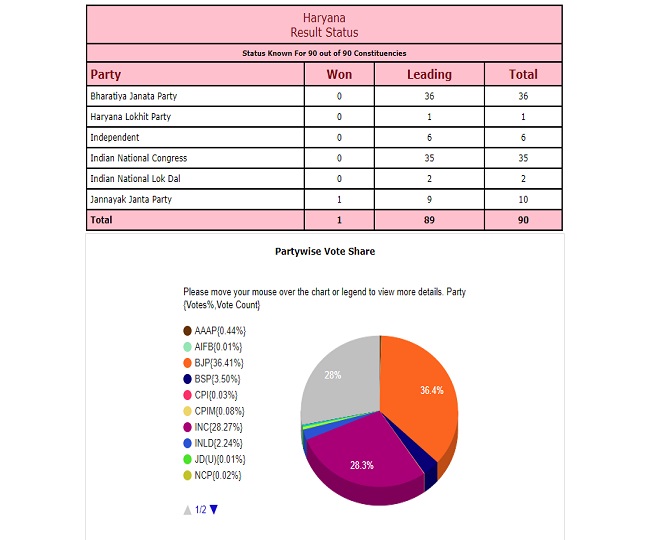 13:30 pm: "The time has come for Congress, JJP, INLD, and independents to come together to form a strong government. I assure that each one will be respected and given a respectable position," says Former Haryana CM BS Hooda in Rohtak. 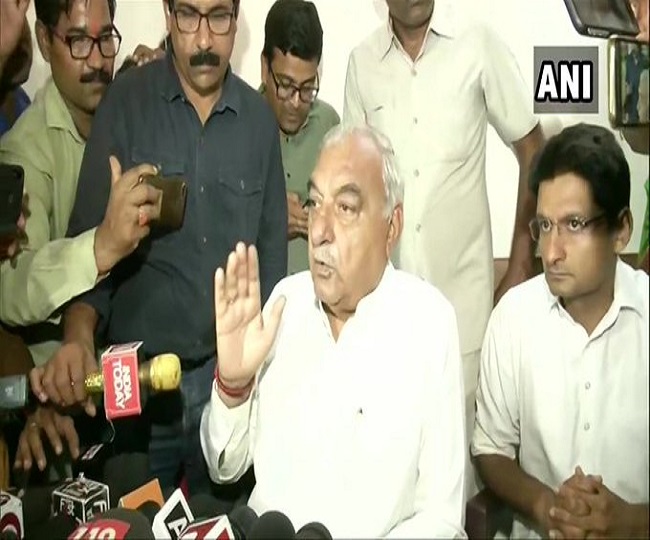 13:24 pm: "Trends in Haryana are on the expected lines and the hard work of the Congress workers is getting reflected in the trends in the state and the Congress is indeed forming a government in Haryana," said Congress spokesperson Jaiveer Shergill to IANS. 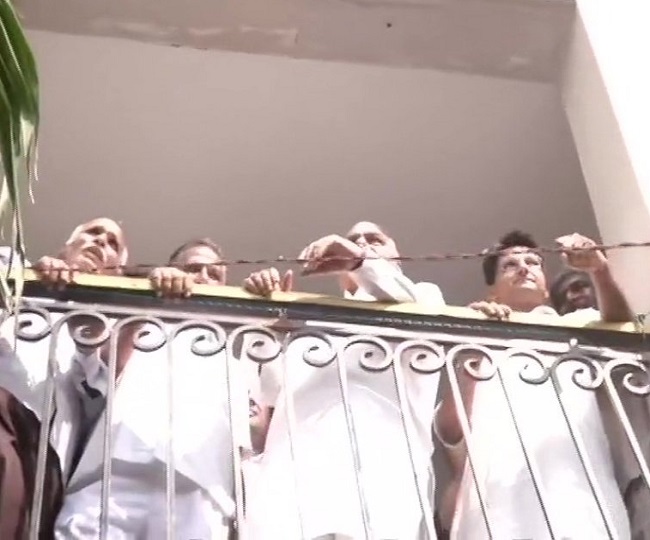 12:06 pm: Union Home Minister and BJP president Amit Shah had cancelled his prescheduled engagements including an ITBP event and has summoned Haryana Chief Minister Manohar Lal Khattar to discuss the situation in the state.

12:02 pm: "I have not had any discussions with any one. Decision will be taken only after the final numbers are out," ANI quoted Dushyant Chautala as saying.

12:01 pm: "Haryana has given the verdict -- it will not tolerate BJP's misgovernance any more. Choosing to leave behind the maladies inflicted on its people in the last 5 years, the state is ready to embrace a new dawn of justice and equality under the leadership of Congress," news agency IANS quoted Haryana Congress President Kumari Selja as saying.

11:37 am: Jannayak Janata Party workers in Jind celebrate as party is leading on 11 assembly seats 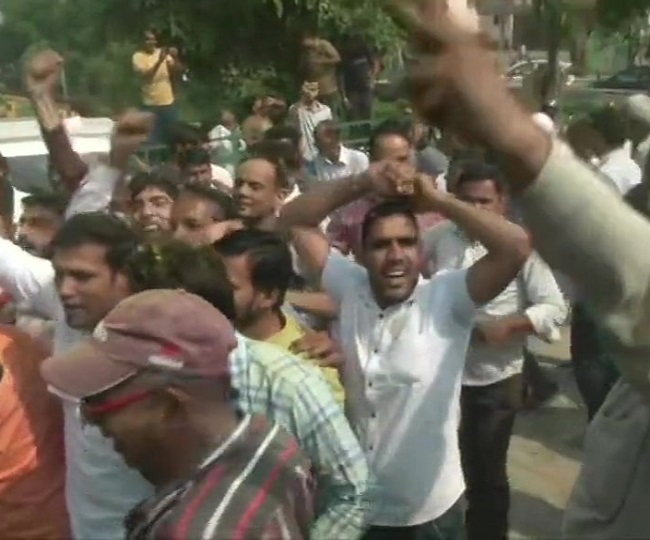 11:24 am: Former CM of Haryana Bhupinder Singh Hooda and Congress candidate from Garhi Sampla-Kiloi is leading.

11:06 am: Former Indian hockey captain and BJP candidate from Pehowa, Sandeep Singh leading by 1606 votes as per official EC trends 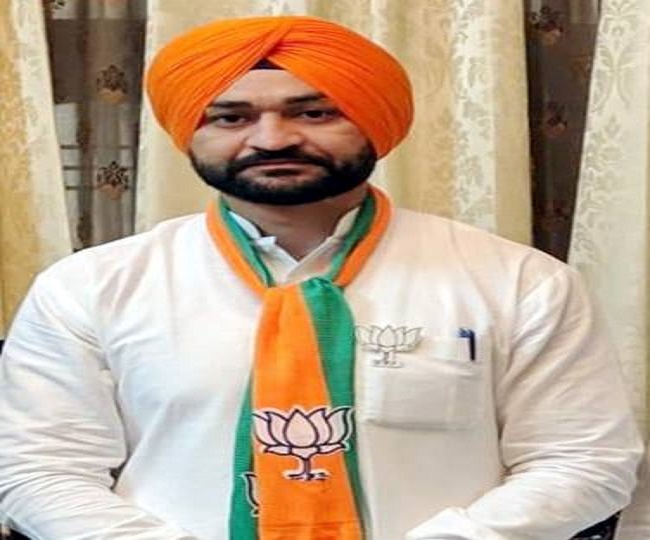 11:02 am: Wrestler and BJP candidate from Baroda, Yogeshwar Dutt leading by 430 votes as per official EC trends 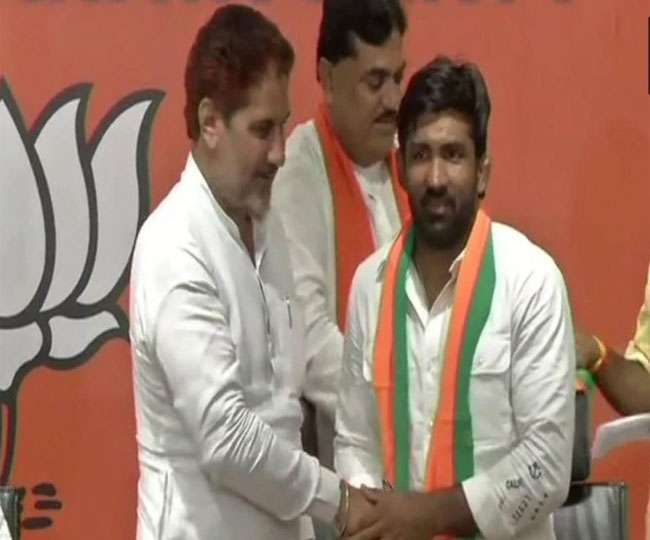 11:01 am: "Haryana is moving towards the path of development. BJP's 75-plus target has failed," ANI quoted Dushyant Chautala as saying.

10:52 am: Randeep Surjewala, Congress candidate contesting from Kaithal assembly constituency at a counting centre in Kaithal. He is leading, after 5th round of counting. 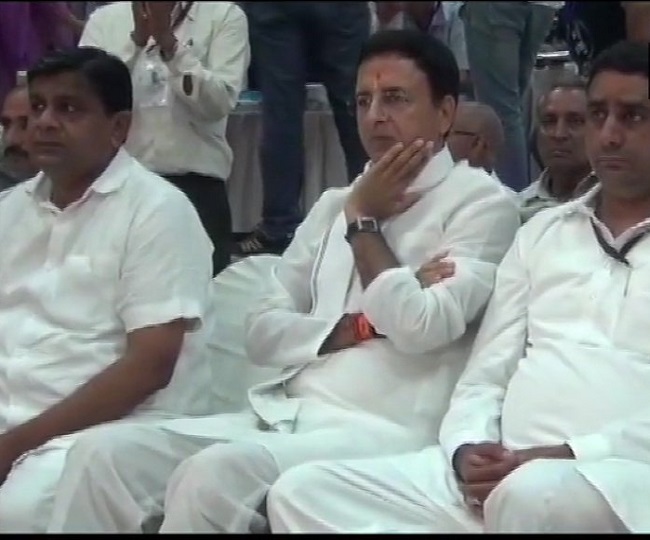 10:52 am: Wrestler and BJP candidate, Babita Phogat, is leading from Dadri assembly constituency of Haryana by over 1,000 votes.

10:33 am: Haryana CM Manohar Lal Khattar contesting from Karnal assembly seat is leading with 14030 votes, after third round of counting.

10:12 am: "As the talks are going on everywhere that BJP is going to win these elections, I am sure, in Adampur as well, BJP will win," ANI quoted Sonali Phogat as saying. 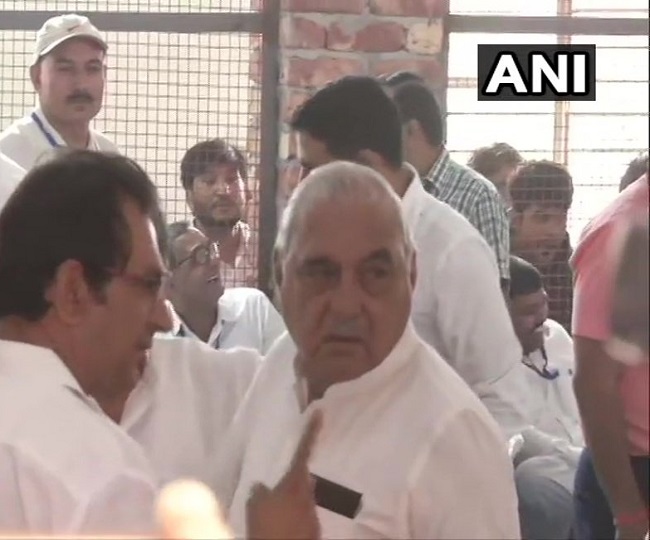 9:30 am: Haryana CM Manohar Lal Khattar contesting from Karnal assembly seat leading with 4588 votes after the first round of counting, reports ANI.

9:27 am: "Congress will form government in Haryana," Times of India quoted Bhupinder Singh Hooda as saying.

9:21 am: "Let the result come. We have decided to hold a meeting of MLAs. We will take a decision on this after holding discussions will all of them," ANI quoted JJP leader Dushyant Chautala as saying.

9:20 am: Two senior Haryana ministers, OP Dhankar and Capt Abhimanyu, are trailing from their respective constituencies 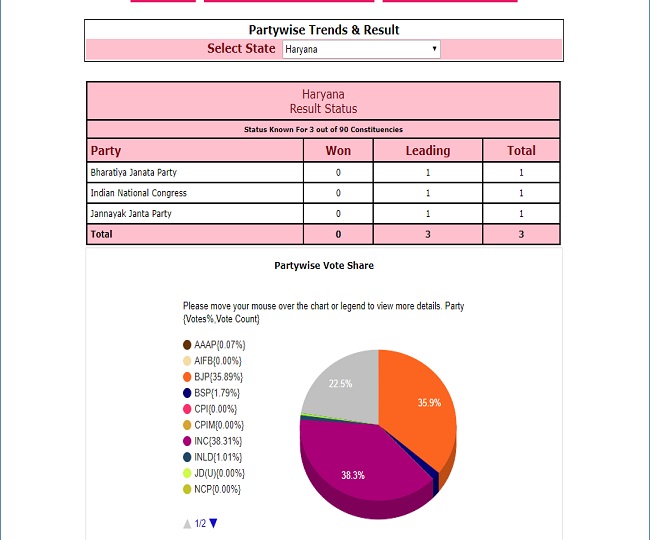 9:01 am: According to official trends from EC, Indian National Congress leading on 1 seat and Jannayak Janta Party leading on 1 seat; There are total 90 assembly seats in the state, reports ANI.

8:49 am: Counting of votes underway in Gurugram. 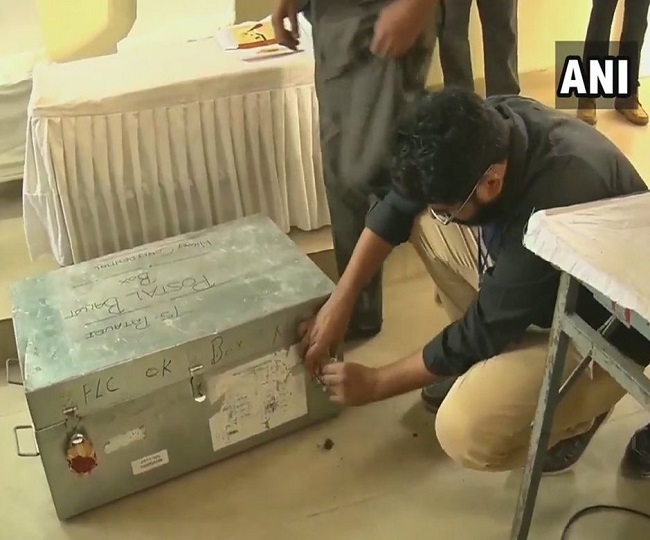 8:42 am: Counting of votes underway in Karnal. 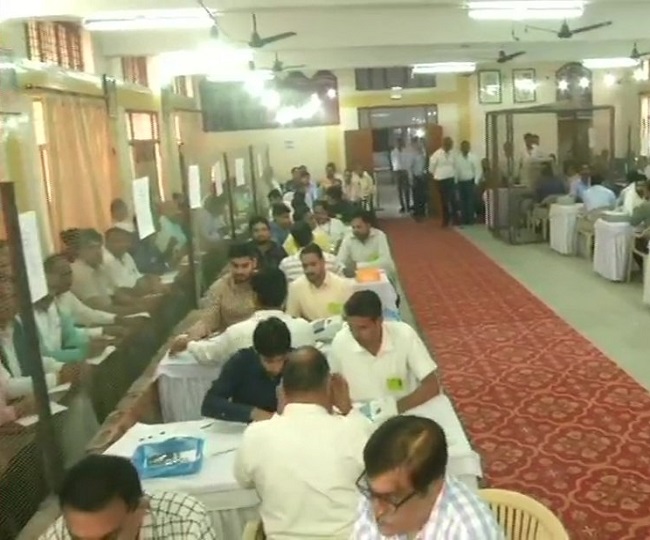 8:30 am: Congress leader Randeep Singh Surjewala is leading from Kaithal in Haryana 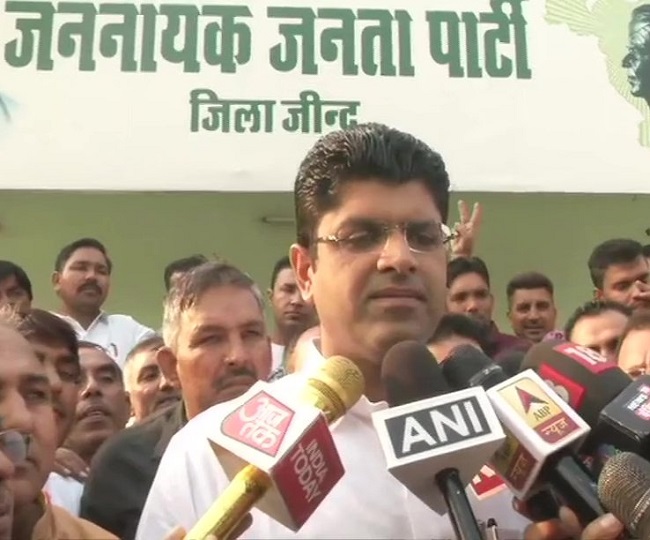 8:18 am: Early trends show BJP ahead on 11 seats with Khattar leading in Karnal.

8:14 am: Early trends show BJP leading on 9 seats while Congress on 6 seats.

8:10 am: According to the exit polls, the Congress is once again set to face embarrassment with the exit polls predicting 12-13 seats for the party.

8:00 am Counting of votes begins in Haryana.

7:47 am: According to the poll of polls, it is going to be a one-sided contest in which the BJP is expected to win 67-68 seats

7:33 am: Counting of votes for Haryana Assembly Polls to begin at 8 am; visuals from outside a counting centre in Jind. 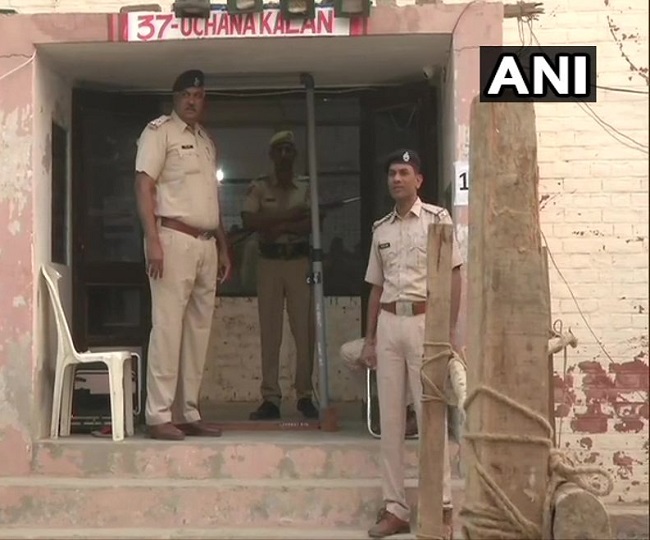 7:17 am: "People have given me love and support, that is my strength and what keeps me going. I have faith in public and myself, people will give blessings to their daughter," news agency ANI quoted BJP's candidate for Dadri assembly constituency, Babita Phogat as saying. 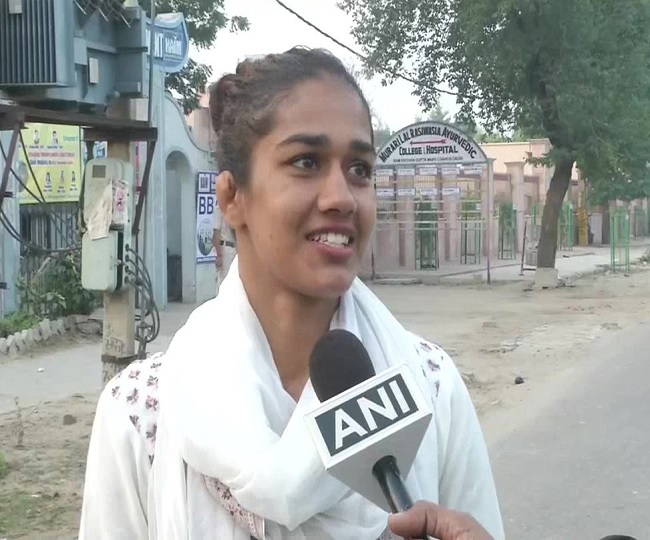 7:15 am: Maharashtra Assembly Elections 2019 Results Live Updates: Counting of votes to begin at 8 am