Gujarat Bypolls Result 2020: Setback for Congress as BJP wins all 8 byelection seats | As it happened

Gujarat Bypolls Result 2020: In a major victory for the Vijay Rupani-led BJP government, the saffron party has managed to win all 8 assembly seats in the state.

Gandhinagar | Jagran News Desk: In what comes as a big relief to the Vijay Rupani government in Gujarat, the Bharatiya Janata Party (BJP) on Tuesday won all the eight seats that went to bypolls on November 3. Following the saffron party's victory, Gujarat Chief Minister expressed satisfaction over the BJP's performance in the state bypolls and said that the party will repeat it in state assembly elections in 2022. While celebrating the BJP's performance, Rupani said that the saffron party "is near to winning all eight seats and this is the trailer for the upcoming elections".

The byelections were necessitated after the sitting Congress MLAs resigned ahead of Rajya Sabha polls in June. Five of them joined the ruling BJP and the party fielded them from the same seats.

Also Read
Priyanka Gandhi to be Congress' CM face for 2022 UP polls, party to..

19:10 pm: The BJP has won seven seats in Gujarat and is leading on one seat in Gujarat. 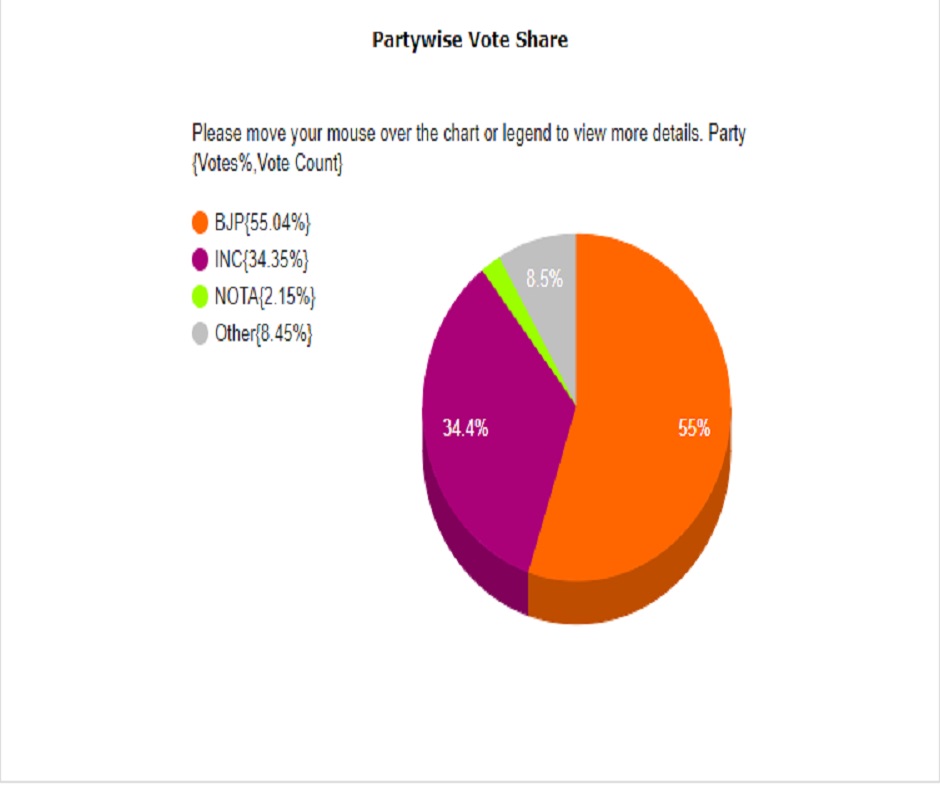 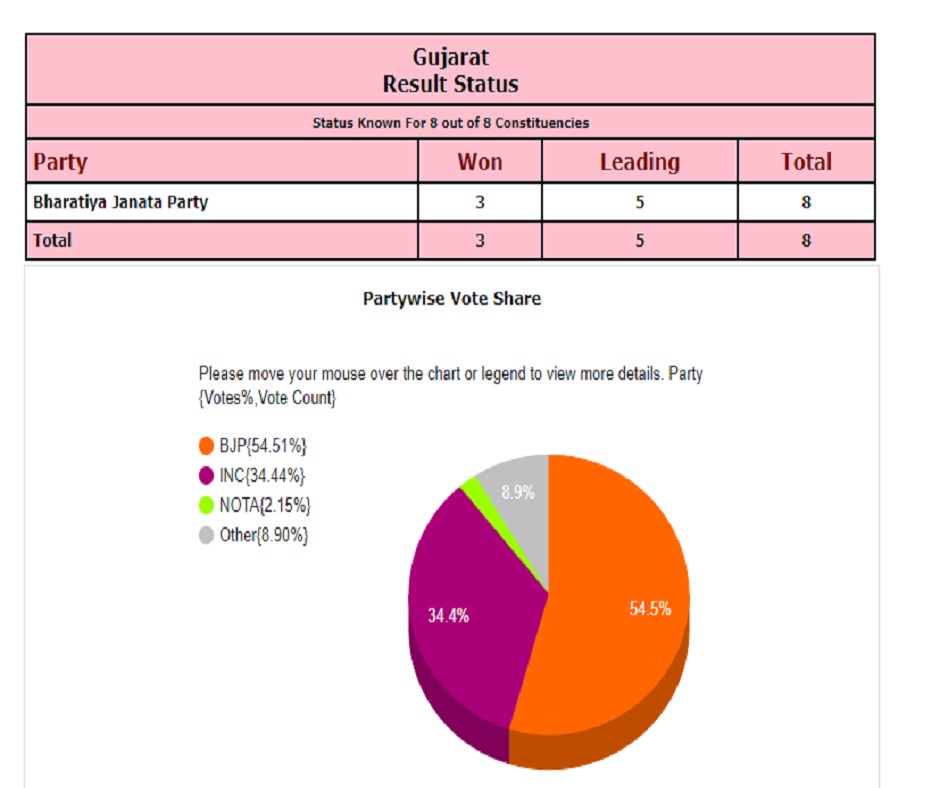 15:59 pm: The election commission has announced that the BJP has won three seats in Gujarat.

15:45 pm: The trends in Gujarat are big jolt for the Congress which was hoping to dent the popularity of the Vijay Rupani-led BJP government in the state.

Counting is currently underway for the state assembly by-polls pic.twitter.com/4HB7gotAOW

13:51 pm: The byelections in Gujarat were necessitated after the sitting Congress MLAs on these 8 seats resigned ahead of Rajya Sabha polls in June.

13:04 pm: "BJP is near to winning all eight seats. This is the trailer for the upcoming elections," says Gujarat Chief Minister Vijay Rupani.

11:49 am: Just In: The Election Commission of India will address the media at around 1.30 pm today, reports news agency ANI.

11:47 am: The BJP has taken a lead on all the eight seats that went to by-elections in Gujarat.

11:00 am: According to election commission, a voter turnout of 58.58 per cent was registered in the by-elections in Gujarat.

10:37 am: If the BJP manages to sweep the bypolls in Gujarat, then it would be a huge jolt for the Congress which was trying to dent the saffron party's popularity in the state.

9:50 am: Counting of votes underway in Gujarat's Vadodara. 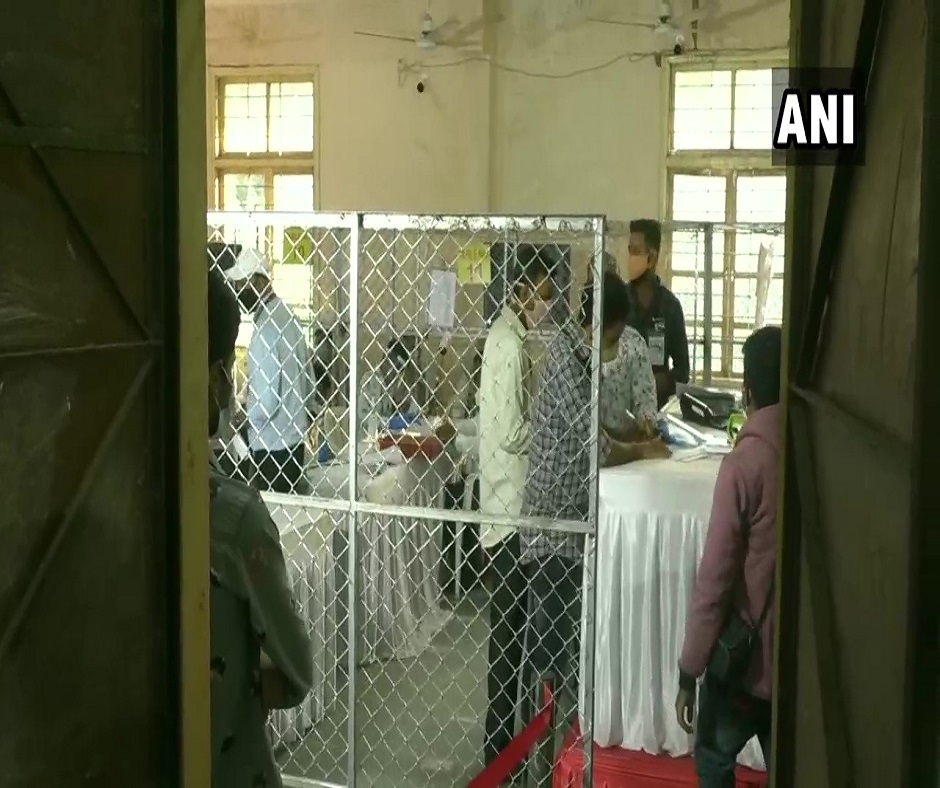 9:48 am: The Congress, meanwhile, is ahead only on one seat.

9:47 am: It looks like the bypoll results in Gujarat will fall in line with the exit polls as the BJP has taken a lead on seven seats.

9:19 am: The BJP is taking lead slowly. According to official trends, the saffron party is ahead on three seats.

9:15 am: The BJP has taken lead on another seat in Gujarat, say official trends.

9:07 am: According to official early trends, the BJP is leading on one seat in Gujarat.

8:55 am: Meanwhile, you can catch all the LIVE updates on bypolls results in Uttar Pradesh here.

8:21 am: The India Today Axis-My India has said that the BJP will win around 6-7 seats.

8:20 am: Meanwhile, the India Today Axis-My India has predicted that the BJP will sweep the Gujarat by-elections.

8:02 am: It is expected that initial trends will start coming around 9 am.

8:00 am: The counting of votes for Bihar Assembly Elections 2020 has begun.

7:28 am: Meanwhile, you can catch all the LIVE updates on Madhya Pradesh bypoll results here

6:30 am: In Gujarat, by-elections were held on eight seats.

6:29 am: The election commission will declare the Gujarat by-election results today.