Elections Amid COVID Crisis: Facing flak, EC bans victory processions on and after counting of votes on May 2

The Election Commission on Tuesday announced ban on any kind of victory processions on of after May 2 when the counting of votes for the assembly polls in five states will be done.

New Delhi | Jagran Politics Desk: The Election Commission on Tuesday announced ban on any kind of victory processions on of after May 2 when the counting of votes for the assembly polls in five states will be done.

"No victory procession after the counting on 2nd May shall be permissible. Not more than 2 persons shall be allowed to accompany the winning candidate or his/her authorised representative receive the certificate of election from the Returning Officer concerned," the Election Commission said. 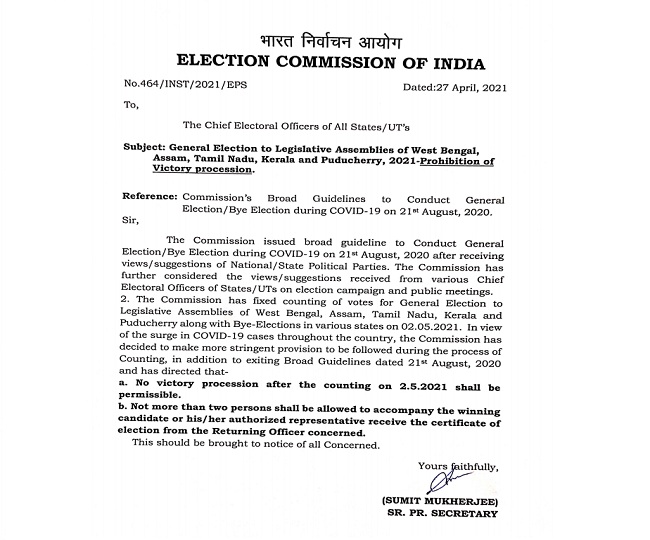 Legislative elections are being held in West Bengal, Kerala, Tamil Nadu, Assam and Puducherry, beginning March 27 and ending April 29, and the votes will counted along with those of the civic body polls in Uttar Pradesh on May 2. While voting is over in all the other states, the last one of the eight-phase polling in West Bengal will be held on April 29.

The move comes as the poll body continues to face severe criticism for holding polls first in Bihar and now in four states and a Union Territory even as the country continues to grapple under the unprecedented second wave of coronavirus.

On Monday, the Madras High Court had castigated the Election Commission over the COVID-19 second wave in the country, holding it 'singularly' responsible for the spread, called it the "the most irresponsible institution" and even said its officials may be booked under murder charges. The EC allowing political parties to take out rallies and meetings had led to the spread of the pandemic, the court said.

Irked over the submission of the EC counsel that all precautionary measures would be taken at the counting centres, the Chief Justice replied that the EC must be 'singularly' held responsible for the second wave of the pandemic spike in the country. The judges also orally warned that they would not hesitate to stop the counting of votes on May 2.

News agency PTI quoted sources saying that the poll panel had trodden with caution all along to ensure COVID-19-free polls. They said that after the successful conduct of the Bihar assembly elections in November 2020 involving 73 million voters at 1,06,000 polling booths, there was widespread appreciation of strength and capability of the constitutional authority.

Despite overall improvement in the COVID-19 situation, general mood of overall revival and no input available on the likelihood of a second wave, the Commission decided to tread with caution and not lower the guards, the sources observed.