New Delhi | Jagran News Desk: The Laxmi Nagar Assembly Constituency was won by BJP's Abhay Verma. He was up against AAP's Nitin Tyagi. He won by just 880 votes.

The Laxmi Nagar Assembly Constituency, which was created by reorganisation by delimitation commission in 2008, is a part of East Delhi (Lok Sabha constituency).

Tyagi had won this seat in 2015 elections against BJP’s BB Tyagi. The much-awaited result of the Delhi Assembly Election will be announced today. The counting of votes have begun. The AAP, however, is buoyed by the Exit Poll results are hoping to retain the power in the national capital.

Meanwhile, the Exit Polls have also predicted that the BJP is likely to be a second distant. The Congress, on the other hand, may once again struggle to open its account. As the result for the 2020 Delhi Assembly Election is declared, it would be interesting to see who will emerge victorious on the Laxmi Nagar Assembly Constituency.

22:40 pm: The Laxmi Nagar Assembly Constituency was won by BJP's Abhay Verma. He was up against AAP's Nitin Tyagi. He won by just 880 votes. 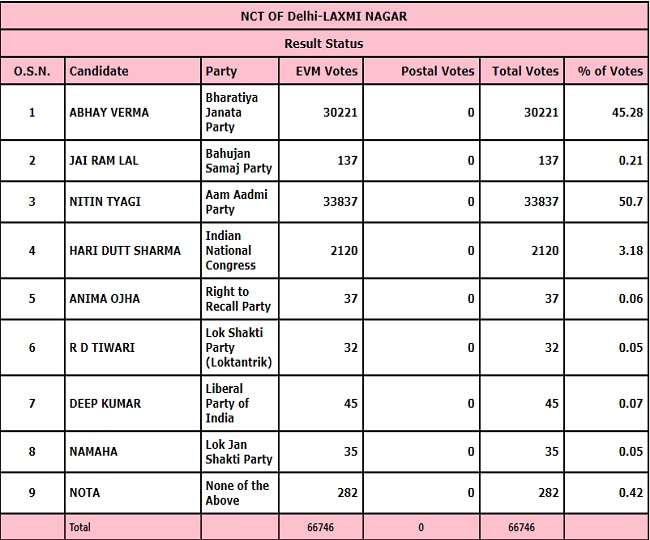 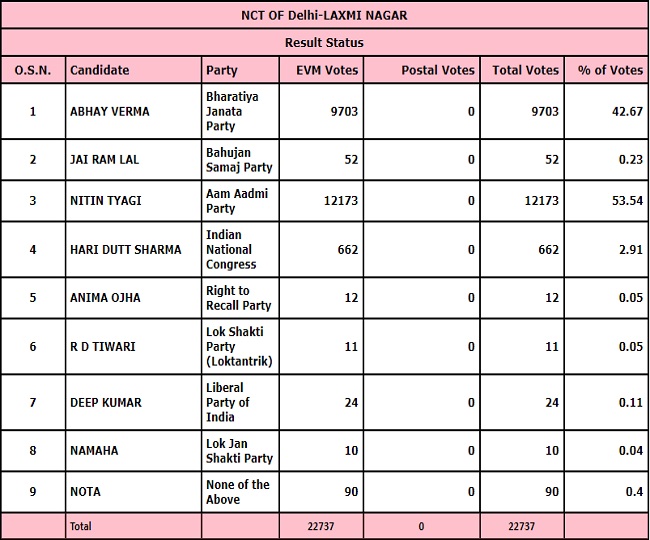 10:03 am: According to official trends, BJP's Ajay Sharma is leading against AAP's Nitin Tyagi.

10:00 am: According to trends, there's a close contest between AAP's Nitin Tyagi and BJP's.

9:25 am: Wait for the final result, we are going to register a massive win, says AAP's Sanjay Singh

7:59 am: Counting of votes to begin shortly.