Exit polls, broadcast soon after the polling ended, have predicted the AAP will get an edge over the BJP in the national capital.

New Delhi | Jagran News Desk: The exit polls have predicted that the Arvind Kejriwal-led Aam Aadmi Party (AAP) is likely to form the government. Exit polls, broadcast soon after the polling ended, have predicted the AAP will get an edge over the BJP in the national capital. On the other hand, it would be a distant dream for the Congress to form a government in Delhi.

The polls predicted that AAP will win a two-thirds majority with some giving it a three-fourth majority in the 70-member assembly. They predicted that Congress will continue its dismal show in the national capital.

According to the poll of polls, the AAP will get 57 seats while the BJP might win 12 seats. The Congress, on the other hand, is likely to get one seat. 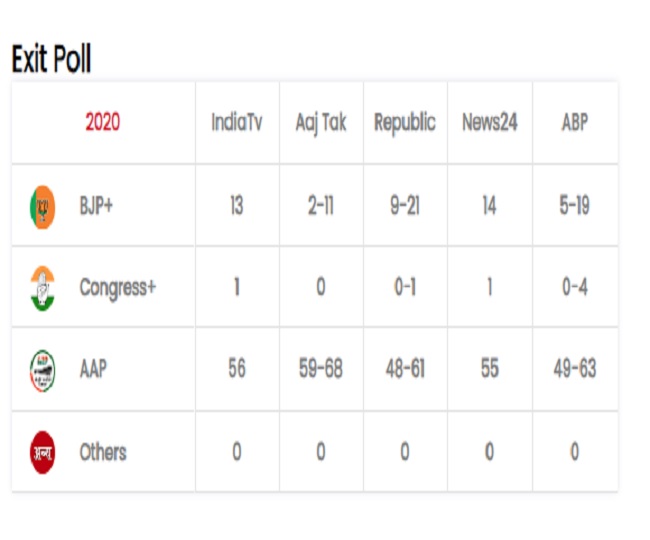 The poll of polls is an average of exit polls done by various agencies in collaboration with news channels. In this case, the numbers predicted by India Today-Axis My India Exit Poll, IANS-CVOTER ABVP, IndiaTV Exit Poll, Republic-Jann Ki Baat and News 24 have been factored in.

The AAP had registered a landslide victory in 2015 elections getting 67 of 70 seats. The BJP had won three seats while Congress had failed to open its account.