Delhi Election Results 2020: Delhi has given birth to 'politics of work', says Arvind Kejriwal as AAP wins big | As it happened

According to the official EC trends, the AAP will likely win around 59 seats while the BJP will win around 11 seats.

New Delhi | Jagran News Desk: The Aam Aadmi Party, led by Arvind Kejriwal, is set retain power in Delhi as the official Election Commission trends suggest that the party is leading on 62 seats while the BJP is ahead on eight seats. The Congress continued with its dismal performance in the national capital and once again drew a blank.

The three-way high-voltage contest between the Aam Aadmi Party, the BJP and the Congress has reached its summit with the votes of the February 8 polls being counted. While the exit polls have predicted a clear majority for Arvind Kejriwal-led AAP, the BJP is confident of winning more than 45 seats in 70-membered assembly and form the government.

In the 2015 assembly polls in the national capital, the AAP had registered a thumping victory, bagging 67 of the 70 seats and the BJP winning the remaining three seats. The Congress had failed to open its account.

The campaigning for the Delhi Assembly elections, which initially started off focusing on development and people-friendly policies, later turned aggressive in wake of the ongoing protests against the Citizenship Act and the recent case of violence in the Jamia University campus.

15:48 pm: Lord Hanuman has blessed us, may god give us more strength to serve people of Delhi: Arvind Kejriwal

15:40 pm: Delhi has given birth to a new kind of politics today. It's called the 'politics of work': Kejriwal

15:39 pm: Want to thank the people of Delhi for giving another mandate to their "son". It's a victory for Delhi: Arvind Kejriwal

14:51 pm: "I am happy to become the MLA from Patparganj assembly constituency again. BJP tried to do politics of hate but people of Delhi chose a government that works for the people," says Manish Sisodia as he wins from Patparganj.

14:37 pm: "AAP won, bluff and bluster lost. The people of Delhi, who are from all parts of India, have defeated the polarising, divisive and dangerous agenda of the BJP. I salute the people of Delhi who have set an example to other states that will hold their elections in 2021 and 2022," said Congress' P Chidambaram in a tweet. 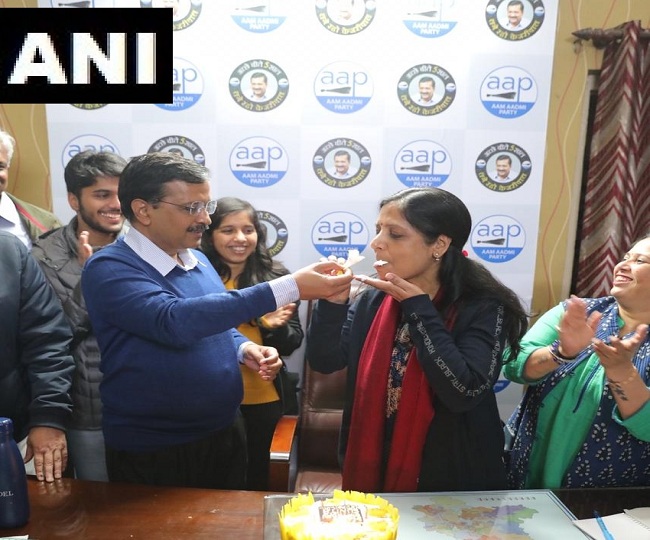 13:58 pm: I accept the result. We will work hard and give a better performance in the next elections. If this election would have been on education and development, then Manish Sisodia would not have been trailing: BJP's Parvesh Verma

13:51 pm: "We are aware of this. But what happened to the BJP which was making tall claims? Being at the Centre, Modiji is close to Delhi's electorate which would have elected the BJP, if satisfied with his work," says Congress leader and Madhya Pradesh CM Kamal Nath

13:34 pm: People's mandate is against us, we accept it; we have resolved to strengthen and rebuild party: Congress 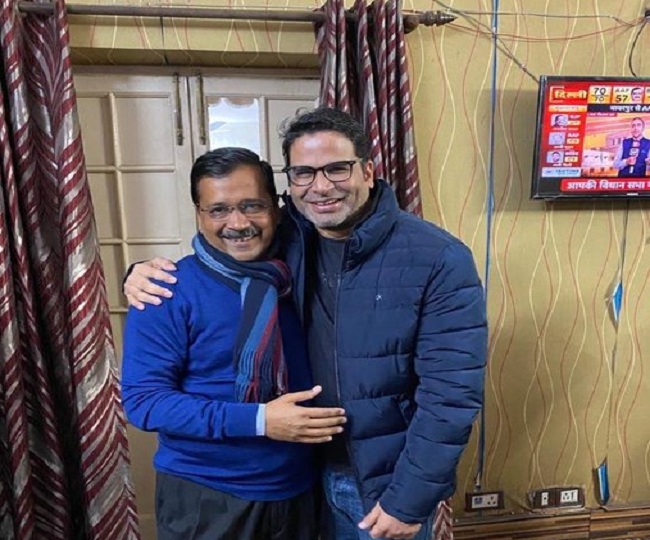 12:44 pm:  I have congratulated Arvind Kejriwal. People have rejected BJP. Only development will work, CAA, NRC and NPR will be rejected: Mamata Banerjee

12:38 pm: Arvind Kejriwal and other AAP leaders at party office. 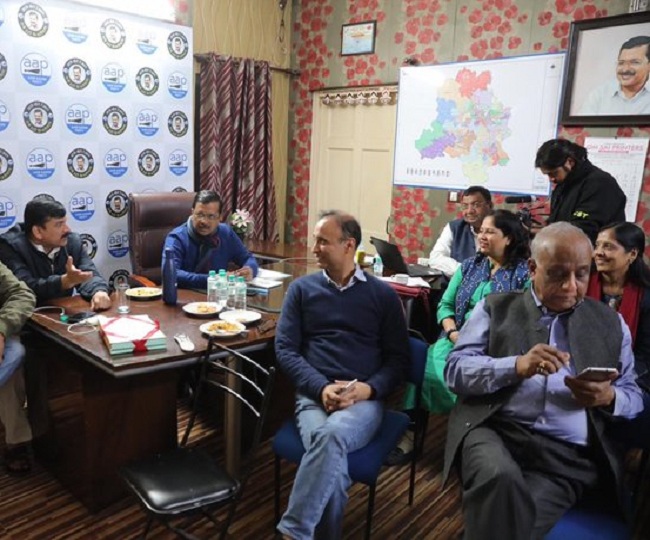 12:34 pm: Subhash Chopra, Delhi Congress Chief: I take responsibility for the party's performance, we will analyse the factors behind this. Reason for the drop in our vote percentage is politics of polarization by both BJP and AAP.

11:52 am: Aam Aadmi Party's Manish Sisodia trailing behind BJP's Ravi Negi by 1576 votes, in Patparganj assembly constituency, after fifth round of counting.

11:01 am: Aam Aadmi Party workers in Amritsar celebrate as trends indicate lead for the party. 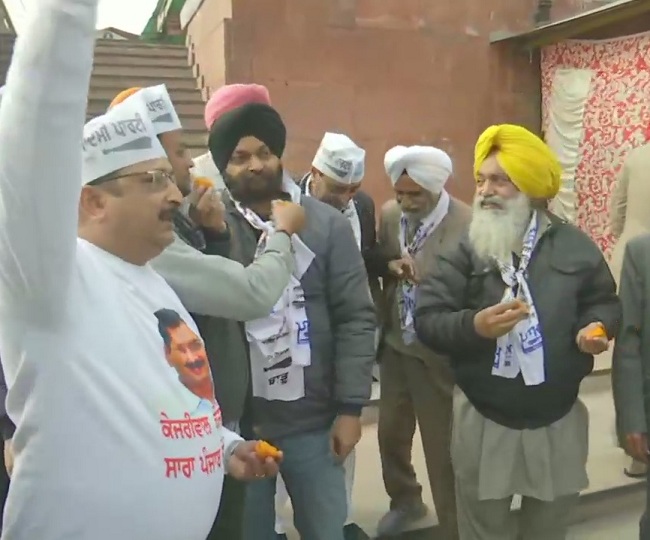 10:46 am: "Trends indicate that there is a gap between AAP-BJP, but there is still some time. We are hopeful. Whatever the outcome, being the state chief I am responsible," Manoj Tiwari said while speaking to media.

10:44 an: Everyone knew that Aam Aadmi Party will return to power for the third time. Congress's defeat will not send a good message. The victory of AAP against the Bharatiya Janata Party & its communal agenda is significant: Congress' Adhir Ranjan Chowdhury

10:36 am: "Now, all talk is over. Now, we have to wait for the blessings of the people. I am confident it will be a good day for BJP. We are coming to power in Delhi today. Don't be surprised if we win 55 seats," says Delhi BJP chief Manoj Tiwari

09:41 am: AAP's Atishi, Amanatullah Khan and Manish Sisodia are trailing as per the latest trends.

09:40 am: The trends are now showing BJP leading in Okhla and Kalkaji.

09:35 am: Manish Sisodia trailing from Patparganj.

09:31 am: BJP ahead in Shaheen Bagh and Okhla. Amanatullah Khan trailing from Okhla.

09:20 am: Aam Aadmi Party's Raghuvinder Shokeen leading from Nangloi Jat constituency, after first round of counting of votes.

09:05 am: Delhi deputy CM and senior AAP leader Manish Sisodia is ahead in Patparganj

09:00 am: In Malviya Nagar, AAP's Somnath Bharti is ahead of former councilor Shailendra Singh Moti of the BJP and Congress candidate Neetu Verma, a former DUSU president

08:29 am: We are assured that BJP government will be formed in Delhi with a majority, senior party leader Vijay Goel tells ANI

08:24 am: BJP leader Kapil Mishra is leading on the Model Town seat.

08:16 am: Congress opens its account, Harun Yusuf leading from Ballimaran.

08:05 am: Neel Khatri of BJP ahead from Narela constituency, show initial trends.

08:00 am: Counting of votes for 70 assembly seats in Delhi begins. Postal ballots will be counted first and then the EVM polls.

07:43 am: Delhi Deputy Chief Minister Manish Sisodia: We are confident of a win today because we have worked for people in the last 5 years. 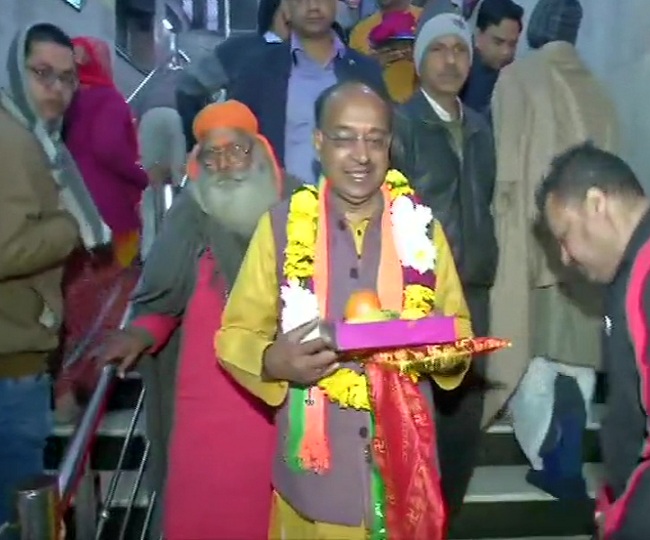 07:23 am:  I am not nervous. I am confident that it will be a good day for BJP. We are coming to power in Delhi today. Don't be surprised if we win 55 seats: Manoj Tiwari, BJP.

07:22 am: From every assembly constituency, five VVPATs will be randomly selected and counted.

07:04 am: Traffic movement will remain closed on Road number 224 Dwarka from sector 7/9 crossing towards sector 9/10 crossing due to counting.

06:48 am: Traffic restrictions have been imposed by Delhi Police near the 21 counting centres in Delhi.

06:35 am: Exit polls have predicted a massive victory for the AAP, but the BJP is confident of winning over 45 seats.

06:33 am: The postal ballots will be counted first, followed by the EVM polls and the initial trends are expected to trickle shortly after 8 am.