In the first phase, 61,74,224 voters from 4,847-gram panchayats across 57 development blocks of the state will exercise their franchise

New Delhi | Jagran News Desk: Voting has begun for the Panchayat elections in Chhattisgarh. Polling will be held from 6:45 am to 2 pm in Naxal-affected areas and from 7 am to 3 pm in other places. For this, more than 12 thousand booths have been built.

12,572 polling stations have been set up for the first phase of polling. For this, 80 thousand polling personnel and 976 sector officers have been put in place. All polling parties have been dispatched with polling materials.

Here are the Highlights from Chhattisgarh Gram Panchayat Elections:

4:30 pm: The voting for the first phase of Panchayat elections in Chhattisgarh ends. Votes will be counted shortly.

3:30 pm: Narayanpur | Despite the decree of the boycott of the Naxalites, there is a lot of enthusiasm among the villagers for the Panchayat elections in the inner village of the district. Long queues of voters remain in polling stations even after the scheduled time. Voters kept crossing the hills and river drains to cast their votes. There has been no untoward incident in the first phase of polling in the district.

3:15 pm: Raigad | A shocking incident has come to light in the village Bhagora under Chakradhar Nagar police station area, in which unidentified anti-social elements escaped late night by throwing acid on the face of the old woman. The family came to the spot after hearing the scream of the old woman. According to the police, the incident is suspected of an assault in the family enmity. The same woman is being treated in the Medical College Hospital.

2:30 pm: Durg: In the first phase of panchayat elections, 49.50 polling has been recorded in Durg block till 1 pm.

2:00 pm: Bilaspur: In the three-tier panchayat elections, some arrived on wheelchairs and some with sticks. Some voters were taken by their family members in their laps for voting. 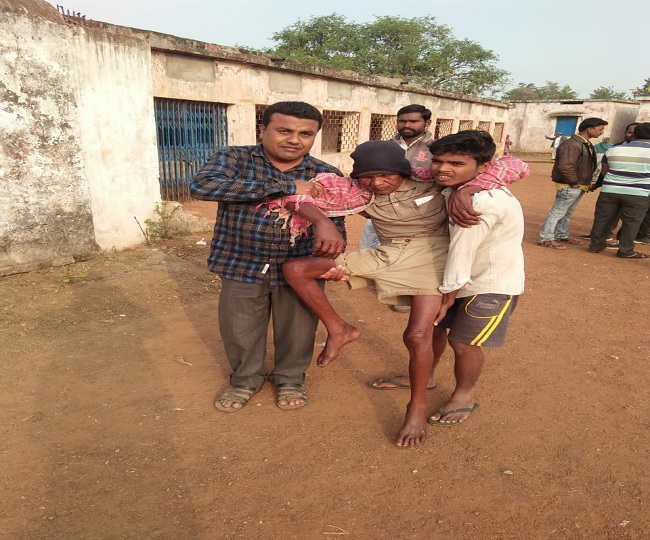 1:30 pm: Polling in Naxal-affected areas will be held from 6.45 to 2 pm. In the rest parts of the state, voting will be held from 7 am to 3 pm. While the voting in the panchayat elections is underway on the ballot paper.

1:00 pm: Bilaspur Congress leader Trilok Shriwas was distributing liquor late Monday night in Gidhauri village near Ratanpur. The villagers did not agree even after refusing. As a result, the villagers broke into his car. Some supporters were also beaten up. Nobody got hurt. At present, no complaint has been lodged in the police station.

12:30 pm: In Korba district, rural voters are also being provided with the convenience of administration and police during voting in Panchayat elections, under this, wheelchairs have also been provided in polling stations, seating arrangements for elderly voters have also been arranged. Meanwhile, the personnel of the police force deployed in the police polling station are helping the elderly and disabled voters so that they can easily go to the booth and vote. 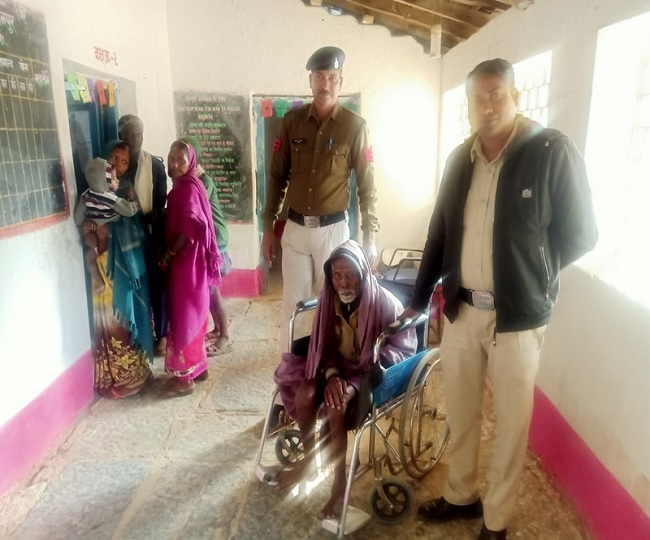 12:00 pm: Bijapur: Naxalites murdered sarpanch candidate's husband. During the election, Naxalites strangled the head of the sarpanch candidate’ husband and former assistant constable Baldev Tati. The deceased was kidnapped by the Naxalites from Kadena village on Monday. After committing the murder last night, the body was thrown near Koter in Chhattisgarh. 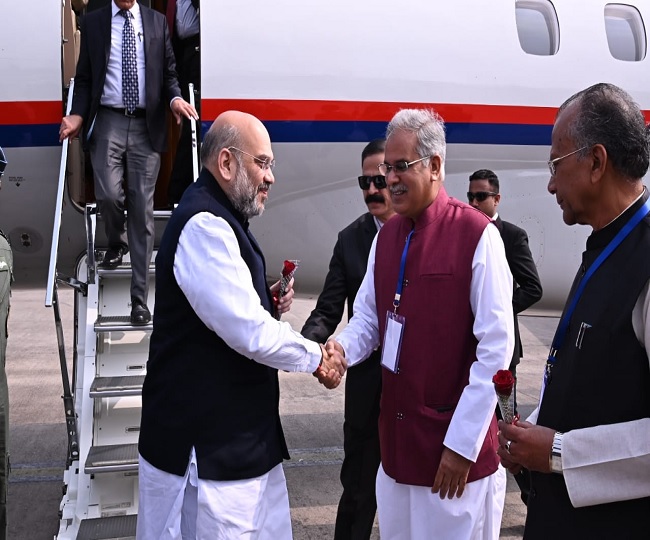 11:20 am: Rajnandgaon: 15.44 per cent voting recorded till 9 o'clock. Three-tier panchayat elections are going on in three blocks of the district. There has been 15.44 per cent polling till 9 in the morning. In the war of rural power, the participation of men is more than that of women, 17.72 per cent of the men and 13.12 per cent of the women have voted in the first hour. 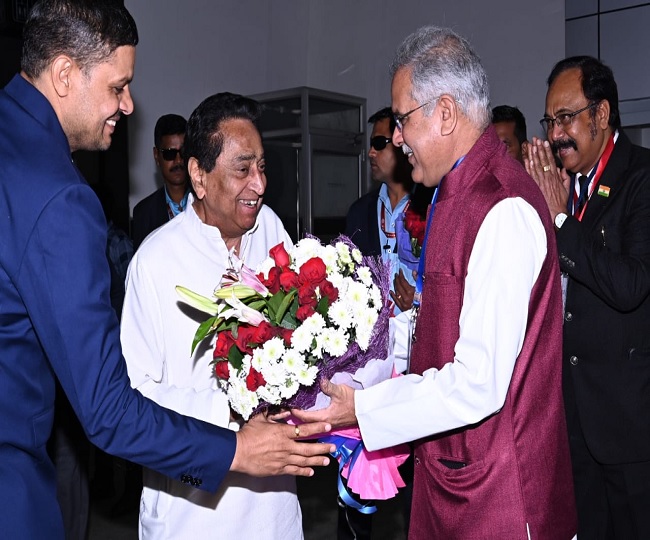 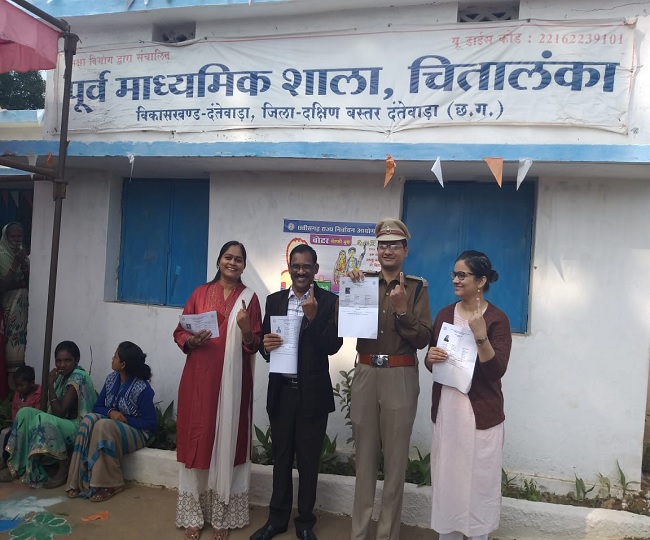 10:50 am: Nearly 50 per cent voting was recorded in Saraideh of Korba block. A large crowd of voters had gathered in the centre of village Saraideh in the block of Korba since early morning. There are about 700 voters out of which more than 50 per cent have been polled so far. Even now a large number of people are seen queuing up waiting for their turn to vote. 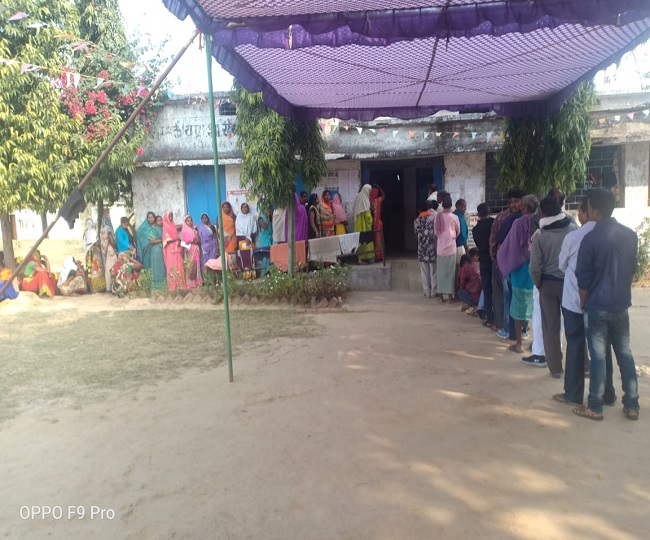 10:35 am: Around 22 per cent polling was recorded in Ambikapur in two hours of polling. 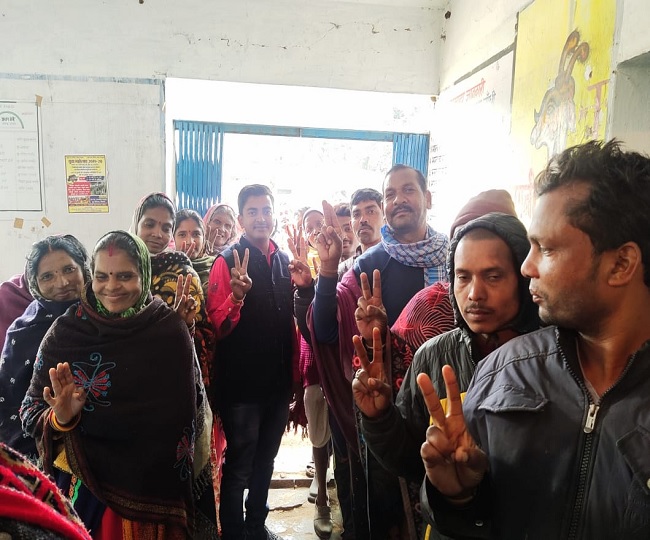 10:30 am: Voting is on for panch, sarpanch, district panchayat members in the Durg block of Durg district. In the first two hours, the average turnout has been around 11 per cent. In Durg block, voting is underway for 1083 seats of Panch, 72 of Sarpanch, 24 of Janpad member and four posts of District Panchayat member. There are about one lakh 49 thousand voters in Durg Block. 237 polling stations have been built for voting in the block. 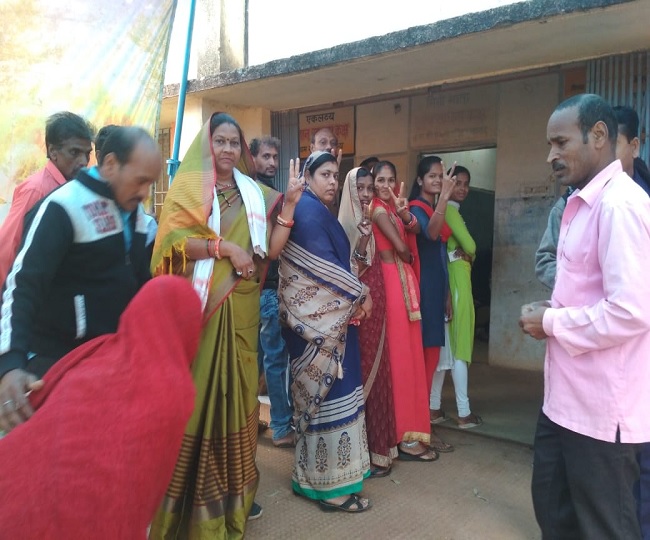 10:15 am: Polling for the first phase of the three-tier panchayat elections in Dantewada continues. Voters have started reaching polling stations in Dantewada and Geedam blocks. There are 6 district panchayat areas, 25 district areas and 84 Gram Panchayats in both the blocks, for which voters are coming to polling booths in large numbers from early morning. 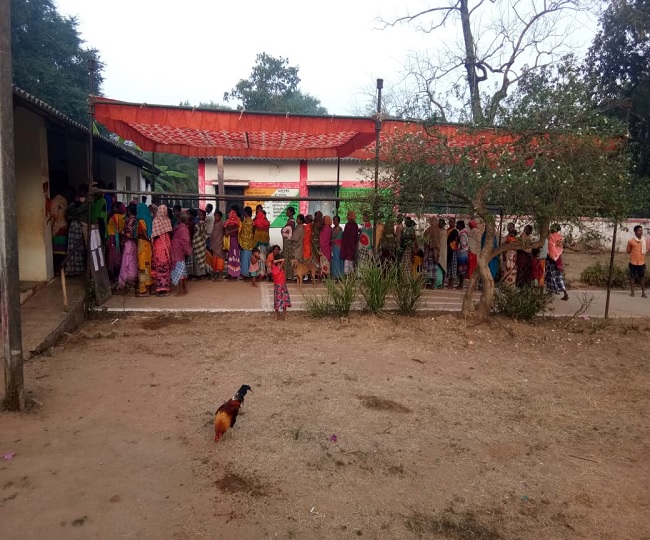 10:00 am: Voters are enthusiastic about forming a village government in the two district constituencies Masturi and Bilha under Bilaspur district and the village panchayat elections in Mungeli district panchayat. 10 per cent voting has been reported till 9 am. 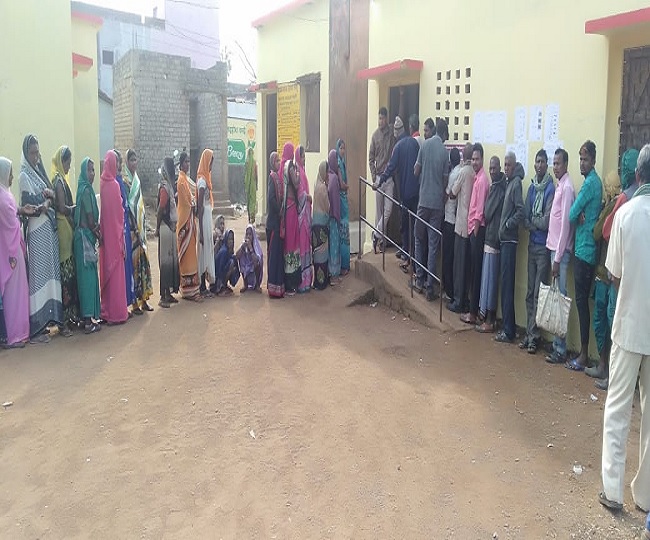 9:45 am: Voting has been going on since morning in the district for panchayat elections in Raigad district. Polling is underway in a total of 305 panchayats in Raigad, Gharghoda, Dharamjaygarh and Tamnar. There are 726 polling stations in the district. In this, the fate of more than 6 thousand candidates is to be decided. A total of 224 polling booths have been included in the list of sensitive and susceptible in the first phase in the district. 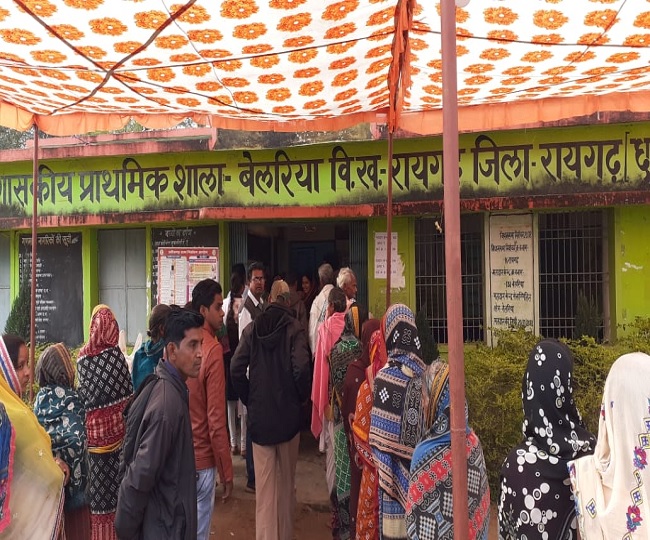 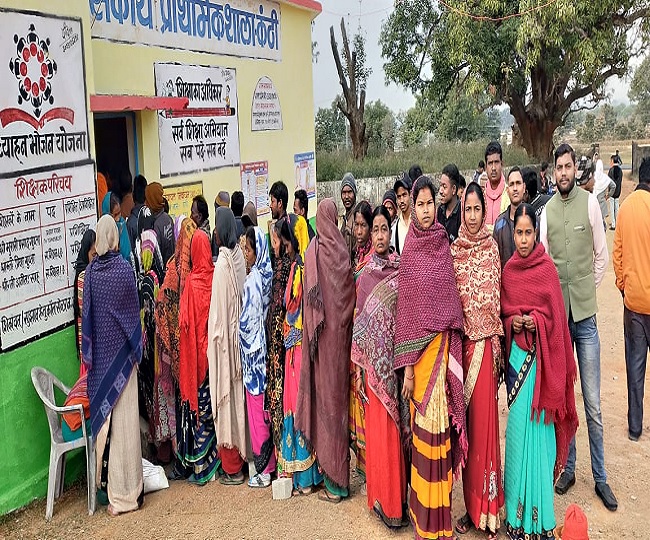 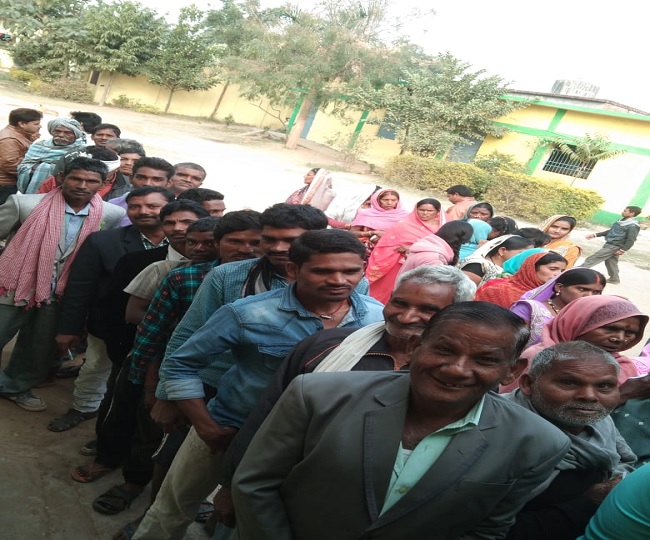 8:55 am: Dhamtari: There is a long queue of rural voters to vote in Rudri in Gram Panchayat. 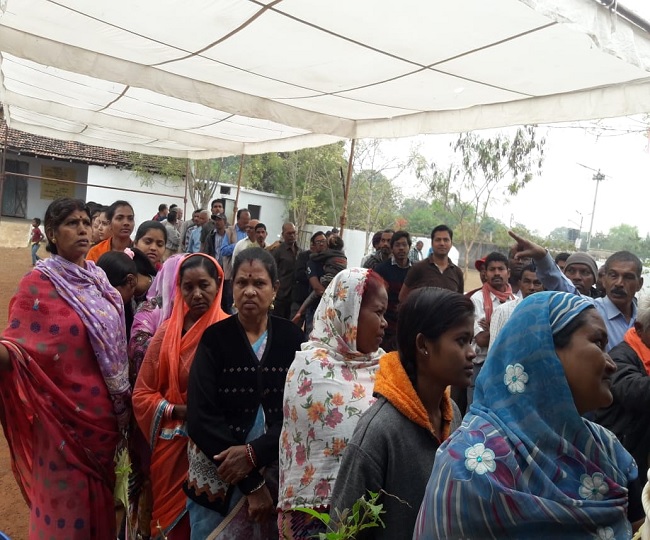 8:30 am: Queue of women voters in Cherpal polling booth of Bijapur from 6:30 am 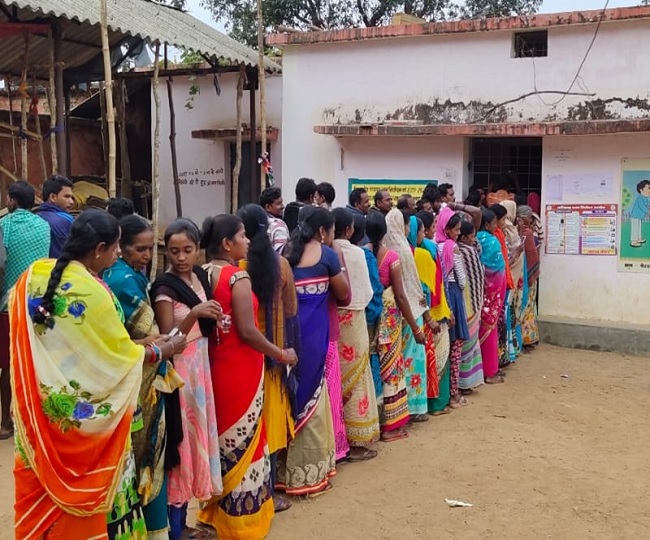 7:30 am: In the first phase, 30 lakh 85 thousand 320 male voters, 30 lakh 88 thousand 835 female voters and 69 voters of the third gender voters are included. A well-organized system has been put in place by the State Election Commission for orderly and peaceful voting.

7:00 am: The first phase of voting has started in the three-tier panchayat elections in Chhattisgarh. In the first phase, 61 lakh 74 thousand 224 voters of 4 thousand 847 gram panchayats of 57 development blocks of the state will exercise their franchise.