Bypolls 2019 Results: BJP wins majority of seats in UP, Congress fairs better in Punjab and Gujarat | As it happened

Stay tuned for all the latest updates of bypoll results in Uttar Pradesh, Gujarat, Punjab, Bihar, Assam, Kerala, among others.

New Delhi | Jagran News Desk: Counting of votes for the by-polls across 53 constituencies including two Lok Sabha seats across 17 states and a Union Territory are underway and the ECI were released on Thursday. BJP won big in Uttar Pradesh and Himachal, but failed to perform to their best in Gujarat and Punjab as Congress showed some recovery after the recent battering it received in the Lok Sabha elections.

Among the states ruled by the BJP and its allies, counting was held for the maximum 11 seats in UP, followed by six in Gujarat, five in Bihar, four in Assam and two each in Himachal Pradesh and Tamil Nadu.

The other states where by-polls were held are Punjab (4 seats), Kerala (5 seats), Sikkim (3 seats), Rajasthan (2 seats) and one seat each in Arunachal Pradesh, Madhya Pradesh, Odisha, Chhattisgarh, Puducherry, Meghalaya and Telangana. Counting of votes was also held in Satara (Maharashtra) and Samastipur (Bihar) Lok Sabha seats, which were held by the NCP and the LJP respectively.

5:03 pm: BJP wins eight seats in UP assembly bypolls, SP manages to win two. Post results, UP Chief Minister Yogi Adityanath said, "On 8 out of the 11 seats (UP by-polls), BJP & its allies have registered victory. I congratulate all the candidates who have won today. PM Modi's 'mantra' of 'Sabka saath sabka vikas' has become the 'mantra' of the politics in India." 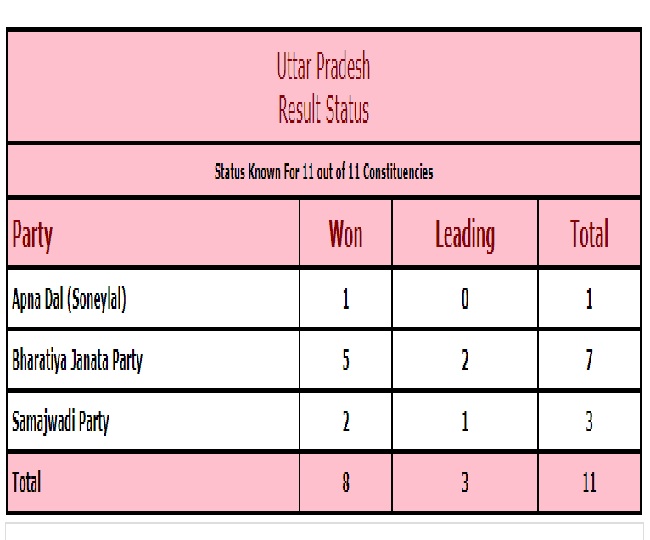 BJP's Kirat Singh beat Inder Sain of Samajwadi Party by over 10900 votes in Gangoh while  Suresh Vahndra Tiwari defeated his nearest rival Major Ashish Chaturvedi by a margin of over 35,000 votes in Lucknow Cantt. Meanwhile, in Zaidpur, BJP's Ambrish trailed by SP's Gaurav Kumar by over 4000 votes.

4.11 pm: In Tamil Nadu, AIADMK wins Vikravandi assembly constituency, a bastian of opposition DMK party. Muthamilselvan won by a margin of over 44,000 votes. The party is also leading by over 31800 votes in Nanguneri's seat.

3:47 pm: Congress won 2 seats while the ruling BJP managed to win just 1 seat after counting of first three seats were completed in Gujarat. Jashu Patel of Congress defeated BJP's Dhavalsinh Zala in Arvalli by over 700 votes.

In Tharad, BJP's Jivraj Patel lost by over 6400 votes to Gulabsinh Rajput of Congress while BJP's Ajmali Thakor defeated Babuji Thakor of Congress by 29,000 votes in Kheralu. Congress were leading in the remaining three seats.

3:32 pm: Results announced for Mukerian and Dakha in Punjab. Indu Bala of Congress defeated BJP nominee Jangi Lal Mahajan by 3440 votes in Mukerin while SAD's Manpreet Singh Ayali defeated Sandeep Singh Sandhu of INC by 14,672 votes. However, Congress ended up winning three out of four seats in the state.

2:13 pm: Raminder Singh Alwa wins over his nearest rival Raj Singh of SAD by a margin of 16134 seats in Jalalabad assembly constituency in Punjab.

2:05 pm: Qamrul Hoda of AIMIM wins Kishanganj assembly constituency by a margin of 10,211 votes over his nearest rival Sweety Singh of INC.

1:55 pm: BJP continues to lead over Congress in three seats of Assam. Bijoy Malakar was 16834 votes ahead over his nearest rival Keshab Prasad in Ratabari, Karti Kurmi trail by Royal Soreng by a huge margin of 35321 votes in Rangpara while Nabanita Handique was 7786 over Sushil Kumar Suri. 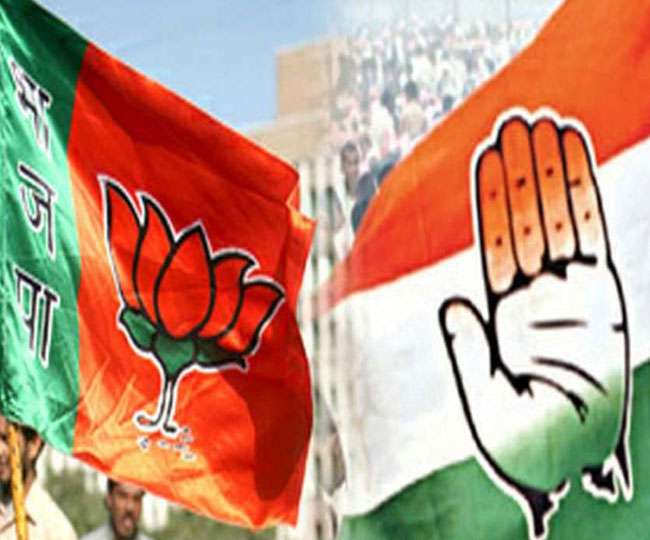 1:40 pm: In Bihar, RJD is leading in three seats over rivals JD(U) as Zafar Alam is leading over Arun Kumar by 8868 votes in Simri Bakhtiarpur, Rabiya Khatun by 597 votes Lakshmikant Mandal in Nathnagar constituency while JDU Laldhari Yadav is trailing by 19058 votes against Ramdeo Yadav in Belhar.

1:25 pm: IUML candidate MC Kamaruddin wins by 7,923 votes in Manjeshwar. He defeated Raveesh Thanthri Kuntar by a margin of 9,999 votes.

12:58 pm: Result declared for By-election Konni, Kerala where Advocate K U Jenish Kumar of CPI(M) won the seat with a margin of 9953 votes. Meanwhile, counting is underway for other four by-elections held at Manjeshwar, Eranakulam, Aroor and Vattiyoorkavu

11:51 am: BJP continues to lead in three seats, AIUDF in one in Assam.

11:14 am: In Madhya Pradesh's Jhabua, Kantilal Bhuria of Congress is leading over BJP's Bhanu Bhuria by 4597 votes.

11:07 am: Independent candidate Chakat Aboh is leading by 4,363 votes over another independent nominee Azet Homtok in early trends.

11:00 am: BJP is leading in six seats, Samajwadi Party ahead in two in Uttar Pradesh. In Gujarat, BJP and Congress are leading in three each assembly constituencies.

10:56 am: RJD and JD(U) are leading in two and one seat in Bihar respectively.

10:46 am: Congress-DMK candidate from Kamaraj Nagar constituency, John Kumar said,"I thank people for giving a big mandate and making me win. My first priority will be to provide basic necessities to people. I also congratulate my opponents who worked hard but couldn't win," as quoted by ANI. He defeated rival Bouvanesvarane of All India N.R. Congress by a margin of 4170 votes.

10:31 am: As per official trends from Election Commission, BJP is leading in five seats in Uttar Pradesh. SP and BSP are ahead in two seats each while Congress is leading in one seat. 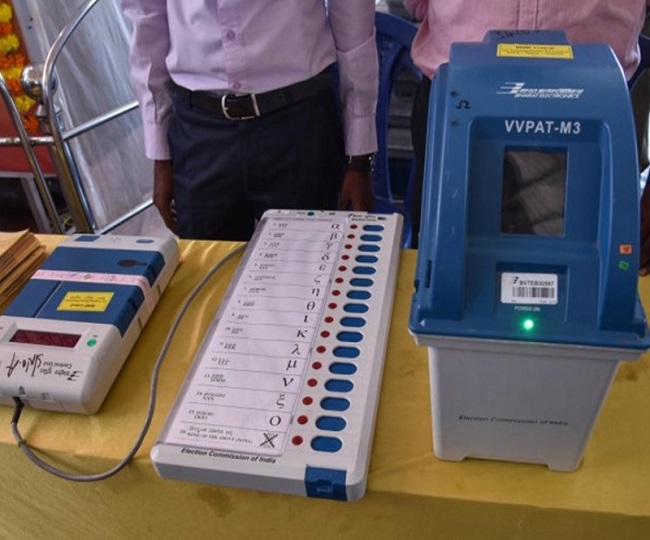 10:18 am: In Gujarat, Congress is leading in three seats while the ruling BJP is ahead in two seats.

10:10 am: Congress is leading three seats in Punjab, SAD ahead in one. As per initial trends, Congress nominee Balwinder Singer Dhaliwal is leading over his rival BJP nominee Rajesh Bagha by a margin of 1852 votes in Phagwara.

9:59 am: BJP is leading both Dharamshala, Pachhad seats of Himachal Pradesh.

9:46 am: LJP is leading from Samastipur in Bihar, reported India Today

9:34 am: Vishal Nehriya of the BJP is leading with 1,187 votes against his nearest rival Vijay Inder Karan of the Congress in Dharamshala.

9:29 am: Tazeen Fatima of Samajwadi Party from Rampur assembly constituency is leading with 6364 votes after second round of counting.

9:21 am: Congress is leading 2 seats in Kerala, Indian Union Muslim League in one 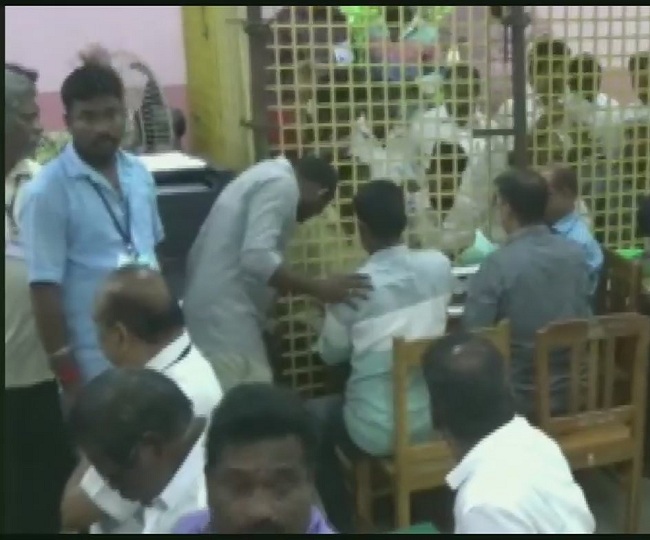 9:13 am: INC, BJP and Indian Union Muslim League are leading 1 each seat in Kerala.

9:09 am: By-polls in five assembly seats in Bihar is being described as the semi-finals ahead of the 2020 assembly election. The main contest is between RJD and JDU in Nathnagar constituency.

8:40 am: BJP is confident of sweeping victory in UP by-polls. "We are going to win all 11 seats," IANS quoted Deputy Chief Minister Keshav Maurya as saying. The BJP is contesting 10 seats in the state, having left one (Pratapgarh) for its ally Apna Dal.

8:16 am: Both BJP and the ruling Congress in Chhattisgarh are eying victory in the lone Naxal-affected seat of Chitrakot, reserved for Scheduled Tribe (ST) candidates.

8:09 am: In Punjab, the main contest is between the Congress and SAD-BJP. Besides, AAP and BSP, Lok Insaaf Party have also fielded their candidates. The fate of 33 candidates will be decided today.

8:06 am: There will be a total of 22 rounds of counting in Nanguneri and Vikravandi constituencies. At first, postal votes will be counted.

7:57 am: The results of byelections in Kerela's Vattiyoorkavu, Konni, Aroor, Ernakulam and Manjeswaram will be declared by 2pm on Thursday. The first leads of the counting will be available by 9am.

7:51 am: Poll of Exit Polls | BJP-led NDA set for thumping victories in Maharashtra and Haryana | Highlights

7:41 am: Bypolls in six seats across Gujarat is viewed as a battle of prestige for CM Vijay Rupani who bagged all 26 seats in the recently concluded Lok Sabha elections. Four of these six constituencies are currently held by the ruling BJP.

7:34 am: Will Congress be able to make a comeback in UP and Gujarat?

7.09 am: Counting of votes by the Election Commission set to begin at 8 am.