New Delhi | Jagran News Desk: Patna Sahib Assembly Election Results 2020: Sitting BJP MLA and minister in Nitish Cabinet Nand Kishor Yadav registered his 7th consecutive win in Patna Sahib. He defeated his Congress rival, Pravin Singh, by a huge margin of over 19,000 votes. Formerly known as Patna East, the Patna Sahib constituency went to polls during the second phase of the Bihar Assembly elections on November 3. Yadav is up against Congress leader Pravin Singh. Patna Sahib is considered as a traditional bastion of the BJP and no party could defeat Nand Kishore since 1995 when he first won the constituency. In 2015, RJD's Santosh Mehta came close to winning the seat but fell short by 2,792 votes. This was Yadav's narrowest victory margin. However, pollsters believe this year Yadav would easily retain his seat given that he is facing a relatively weak opponent from Congress. But nothing can be said until the final results are out.

10:15 pm: BJP candidate Nand Kishore Yadav has registered his 7th win in Patna Sahib. He defeated Congress candidate Pravin Singh by a margin of over 19,000 votes.

08:00 pm: Nand Kishore Yadav on the verge of 7th consecutive victory. He has taken 13714 votes lead over his Congress rival Pravin Singh.

02:40 pm: Nand Kishore Yadav, who was trailing in the most half of pre-afternoon trends, has now taken a comfortable lead of 7416 votes. 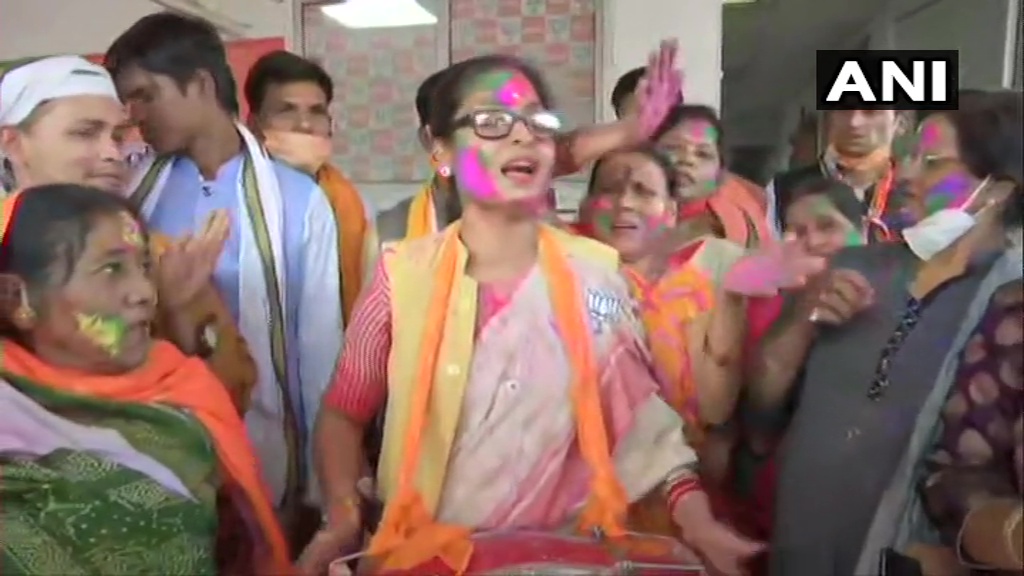 01:10 pm: In a major turnaround, Nand Kishore Yadav has taken lead over his Congress rival Pravin Singh by a margin of 4906 votes.

12:10 am: BJP workers gather at party headquarters in Patna as trends show NDA returning to power.

11:00 am: Congress leader Pravin Singh is now leading BJP's Nand Kishore Yadav by 2179 votes, according to the EC official website.

10:27 am: Bihar minister and BJP leader Nand Kishore Yadav is trailing Pravin Singh of Congress by 1,778 votes in Patna Sahib.

10:11 am: Meanwhile, LJP leading on eight seats. This is a big jump for Chirag Paswan, whose party had won only two seats in 2015 polls.

09:50 am: Nand Kishore Yadav of the BJP continues to trail in Patna Sahib. Congress leader Pravin Singh is leading.

08:22 am: Congress leader Pravin Singh is ahead of BJP's Nand Kishore Yadav in initial trends. Counting of votes underway.

08:15 am: The counting of votes for Bihar Assembly elections is underway at counting centre established at Anugrah Narayan College in Patna.

08:00 am: Counting of votes begins. Initial trends to be out soon.

#BiharElection2020 The counting of votes for Bihar Assembly elections is underway at counting centre established at Anugrah Narayan College in Patna pic.twitter.com/nPfjLuzxxx

07:50 am: Strong rooms opened. Counting of votes to begin in next 10 minutes.

Patna: Strong room established at Anugrah Narayan College being opened, as counting of votes for Bihar Assembly elections to begin at 8 am pic.twitter.com/ezv9fOtHyF

07:10 am: What did Bihar exit polls predict? If the predictions of the post-poll survey hold true, Tejashwi Yadav is all set to oust Nitish Kumar. Most exit polls have predicted a win for the Congress-RJD-led grand alliance. At least two of them - Today's Chanakya and India My Axis have predicted a landslide for Tejashwi Yadav. However, we have seen exit polls failing to project the real picture, which will be out soon as counting begins at 8 am.

06:45 am: Supporters of NDA and Mahagathbandhan starts gathering outside the counting centres. The counting of votes will start at 8 am.

Counting of votes for #BiharAssemblyPolls to take place today.

Visuals from a counting centre in Patna. pic.twitter.com/Oj1Nf5loUW

06:30 am: Hello and welcome to our live blog. It is a big day for Tejashwi Yadav and Nitish Kumar as Janata's verdict on who will rule the state for the next five years will be out today. BJP's Nand Kishore Yadav will also be hoping for the 7th consecutive victory from Patna Sahib. The counting of votes will begin at 8:00 am. Stay with us as we bring you the live coverage of Patna Sahib and Bihar Assembly elections results 2020.

In the 2010 Bihar Assembly elections, Yadav had trounced his then Congress rival Parvej Ahmad by more than 65,000 votes. Yadav secured 68.07 per cent of the total polled votes against Ahmad's 19.42 per cent votes. BJP's Nand Kishore has been winning the Patna Sahib constituency since 1995.