Jamui, Bihar Assembly Election Result 2020: According to election commission, 79,603 votes were received by Singh while Prakash got 38,554 votes.

Patna | Jagran News Desk: In a big setback for the Rashtriya Janata Dal (RJD), Bharatiya Janata Party (BJP) candidate Shreyasi Singh has won from the Jamui Vidhan Sabha Constituency. Singh, who is the daughter of form union minister Digvijay Singh, has defeated RJD's Vijay Prakash by a margin of 41,049 votes. According to election commission, 79,603 votes were received by Singh while Prakash got 38,554 votes.

Talking about Prakash, he had defeated BJP candidate Ajay Pratap in the 2015 Bihar Assembly Election by a margin of over 8,200 votes. However, the NDA had fielded a woman candidate this year from Jamui as the core issues dominating this seat employment, health, education, agriculture and women empowerment.

Catch all the LIVE updates on Bihar Assembly Elections 2020 here

Here are the highlights from the election results in Jamui: 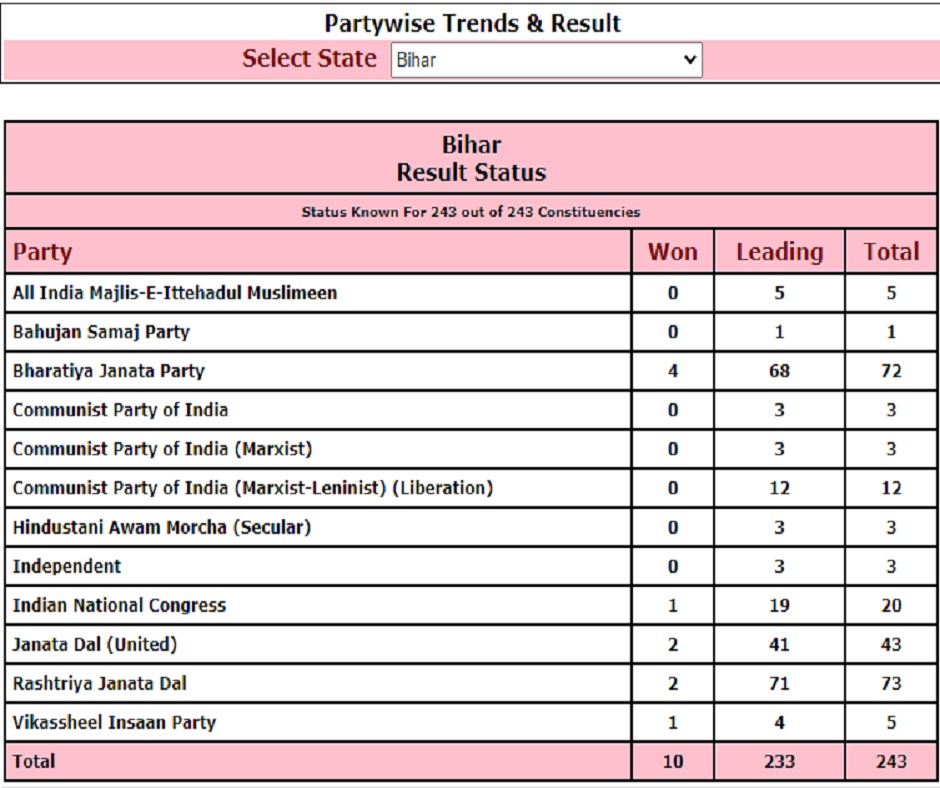 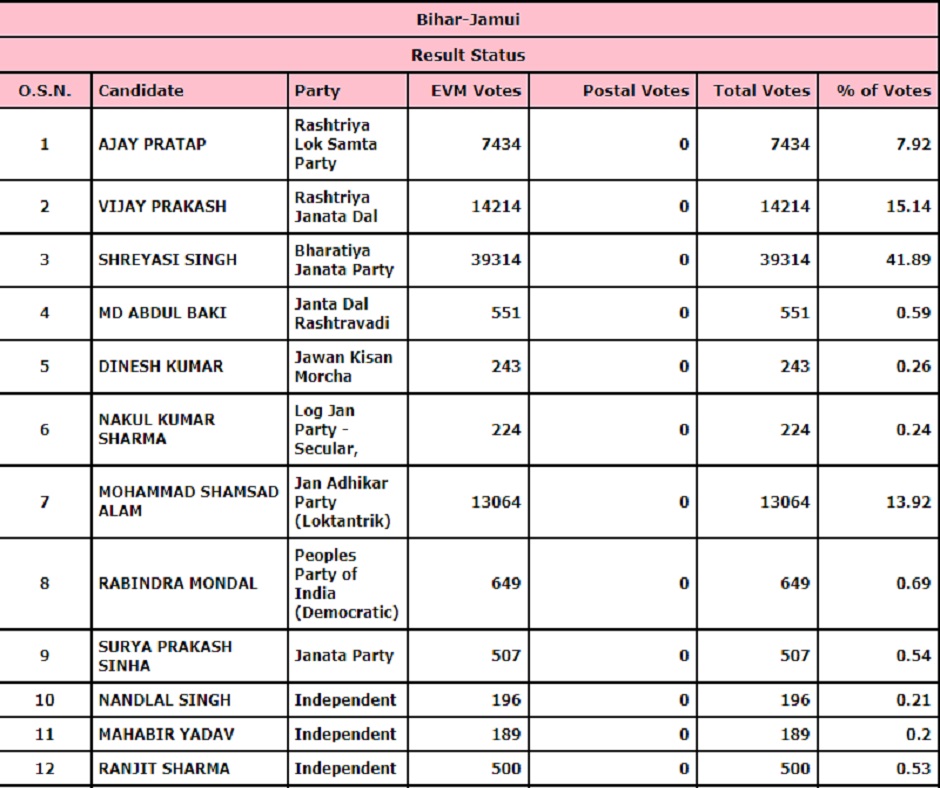 15:39 pm: "EVMs are not tamper-proof, and selective tampering is done. There are seats that we would have not lost in any circumstance but we did by thousands of votes. We'll hold a meeting tomorrow and analyse the results," says senior Congress leader Digvijaya Singh.

13:53 pm: Bihar Election Results 2020: As NDA leads the race, an interesting change in vote and seat shares of BJP, JD(U) and RJD

11:05 am: Meanwhile, Tejashwi Yadav, Grand Alliance's Chief Ministerial face, has taken a lead on his home turf in Raghopur.

10:36 am: Jamui is considered to be a stronghold for the RJD.

10:00 am: Shreyasi is the daught of former Union Minister Dijvijay Singh.

9:53 am: BJP's Shreyasi Singh has taken a lead of nearly 1,200 votes over RJD's Vijay Prakash in the early trends, reports PTI.

9:43 am: Initial trends suggest that the BJP-JDU alliance is leading on 108 seats while the Grand Alliance is ahead on 122 seats.

8:27 am: The counting of votes is underway for 243 assembly seats in Bihar. As per initial trends, NDA is leading on 24 seats while the Grand Alliance is ahead on 46 seats.

8:06 am: While RJD has a strong presence in Jamui, the BJP has fielded Shreyasi Singh on this high-profile seat this time.

8:00 am: The counting of votes has begun. The initial trends are expected to come around 9 in the morning today.

7:38 am: Shreyasi had also organised several rallies in the state in order to woo the voters across this seats.

7:36 am: Looking at the core issue of women empowerment, the saffron party had fielded Shreyasi Singh, the daughter of former union minister Digvijay Singh.

6:25 am: In Jamui, the BJP has fielded Shreyasi Singh while the RJD has fielded Vijay Prakash.

6:24 am: As per the election commission, the counting of votes will begin at 8 am.

6:23 am: The election result for Jamui Vidhan Sabha seat will be declared today.