Bihar Elections 2020 | 51.82 per cent of voter turnout recorded till 5 pm in second phase of polls | Highlights

Bihar Elections 2020 LIVE Updates: More than 2.85 crore voters will decide the fate of 1,463 candidates on Tuesday. For the second phase of voting, the poll body has established more than 41,000 polling stations in Bihar.

New Delhi | Jagran Politics Desk: Voting for the second phase of Bihar Assembly Elections started at 7 am today on 94 assembly constituencies spread across 17 districts of the state. More than 2.85 crore voters will decide the fate of 1,463 candidates on Tuesday. For the second phase of voting, the poll body has established more than 41,000 polling stations in Bihar. Prominent contestants in the fray include RJD leader and Grand Alliance's chief ministerial candidate Tejashwi Yadav who is recontesting the Raghopur seat and his brother Tej Pratap in the fray on Hassanpur seat.

Here are the LIVE Updates from Second Phase of Polling:

5:35 pm: There is no contest anywhere, we are winning: Union Minister and BJP leader RK Singh after casting his vote in Patna 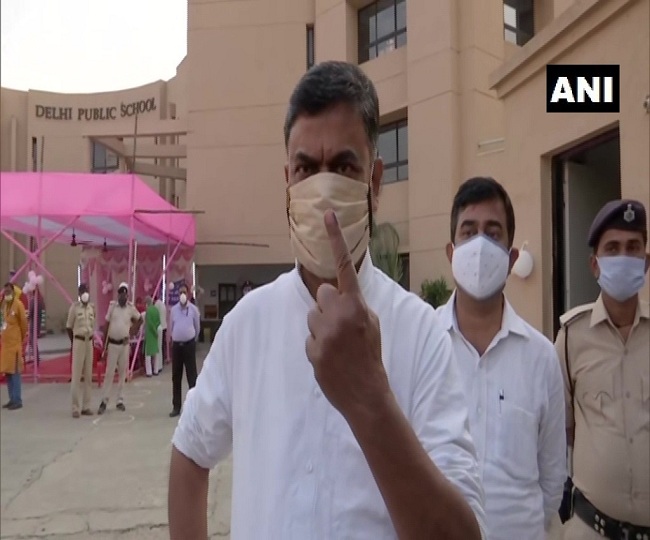 5:15 pm: Union Minister Ashwini Kumar Choubey and his wife cast their vote at a polling booth in Bhagalpur. Voting for the second phase of Bihar Election 2020 is underway. 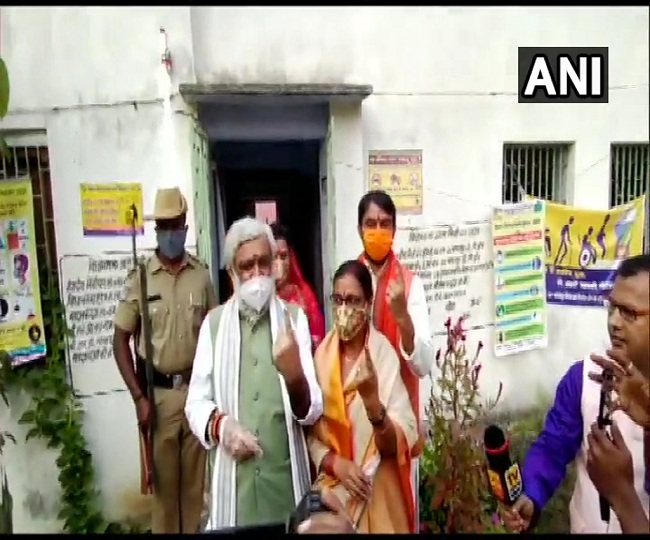 4:40 pm: Women seen standing in a queue at a polling station in Siwan to vote for the second phase of the Assembly election, earlier today. 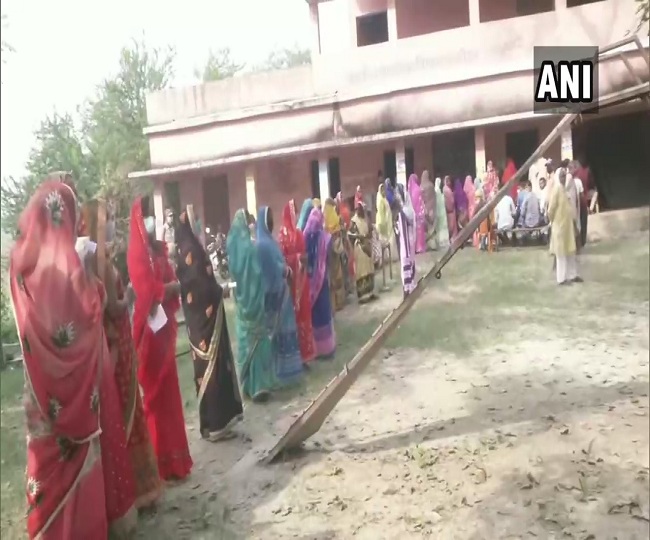 4:00 pm: In Chhattisgarh farmers get Rs 2,500 per quintal for paddy, here you get Rs 700. What mistake did you make? You voted for Nitish ji and Modi ji. Now is the time to rectify the mistake: Congress leader Rahul Gandhi in Katihar

3:00 pm: People queue up at a polling booth in Chapra for voting in the second phase of Bihar Election 2020. 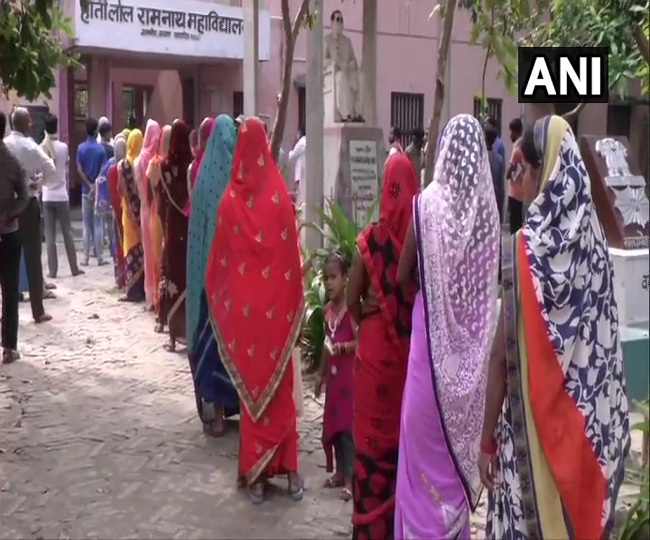 2:15 pm: "There is a group of people that doesn't want you to say 'Bharat Mata ki Jai' or 'Jai Shri Ram.' All of them have now come together & asking for votes from the people of Bihar. There's a need to give a befitting answer to such people in Bihar Elections 2020" PM Modi in Saharsa.

1:45 pm: 'Vocal for local' is a campaign that will change the lives of the local artisans. It is a way with which our local products will gradually become a part of the global market: Prime Minister Narendra Modi at an election rally in Saharsa.

1:35 pm: Villagers of Chulhai Bishunpur in Baruraj assembly constituency boycott elections alleging lack of development in the area. There're 729 voters registered here. Not a single vote has been cast, so far, says an electoral officer at booth no.178. 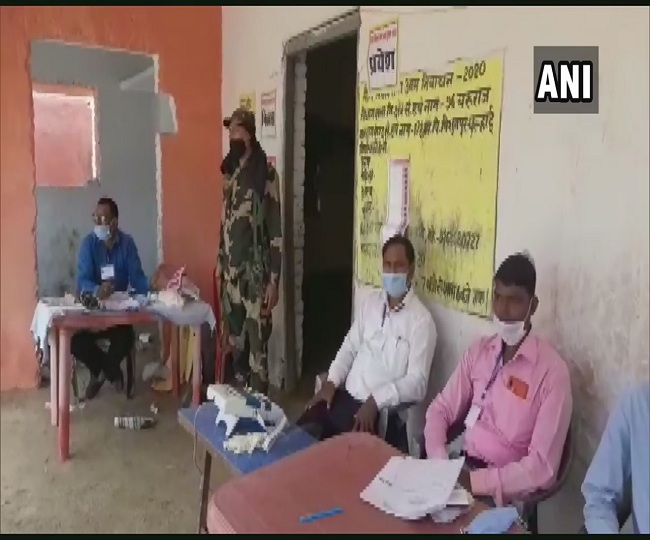 1:20 pm: Key candidates to watch out for in the second phase of Bihar Assembly Elections 2020. 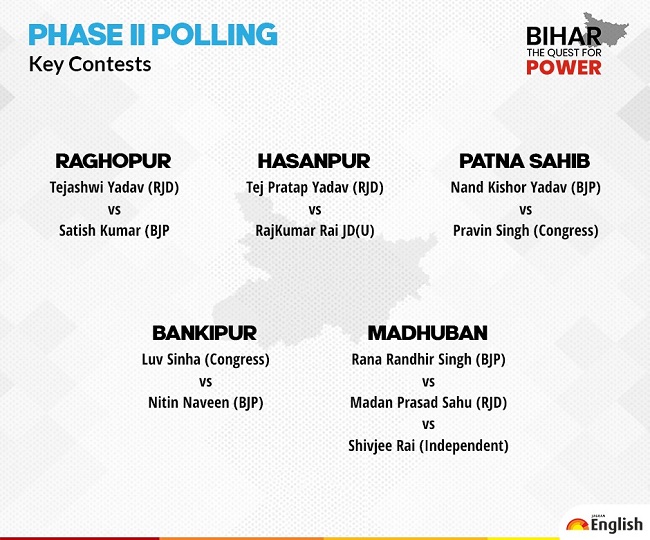 1:00 pm: It is the power of every single vote that will guarantee a bright future for the state of Bihar. Each and every vote is very important and powerful: Prime Minister Narendra Modi at an election rally in Saharsa.

Bihar Elections 2020 Jale Constituency: Will BJP complete its hat-trick in Jale against Congress?

12:20 pm: There's a wave of change. I am confident the results will be in favour of Luv Sinha & development in Bihar: Shatrughan Sinha, Congress. Shatrughan Sinha's son, Luv Sinha is the Congress candidate from Bankipur, Patna 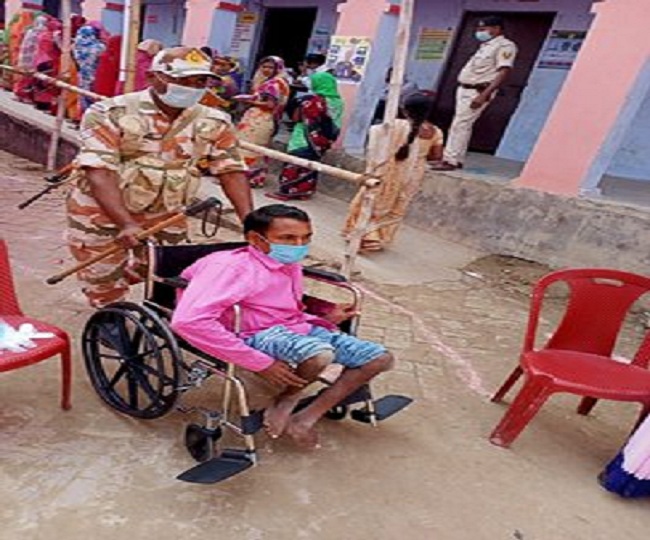 11:50 am: "The public cannot be fooled for long, look at what condition the public has put Congress party in... Today they do not even have a total of 100 MPs in Lok Sabha and Rajya Sabha... people still punish them whenever there's a chance," says PM Narendra Modi

11:45 am: In the last decade, every house in the state of Bihar got electricity and gas connections. Now, from 2021 to 2030, it is time to fulfill more aspirations of the people of Bihar: Prime Minister Narendra Modi at a public rally in Forbesganj in Araria district.

11:40 am: Union Minister Ravi Shankar Prasad casts his vote at a polling booth in Patna. 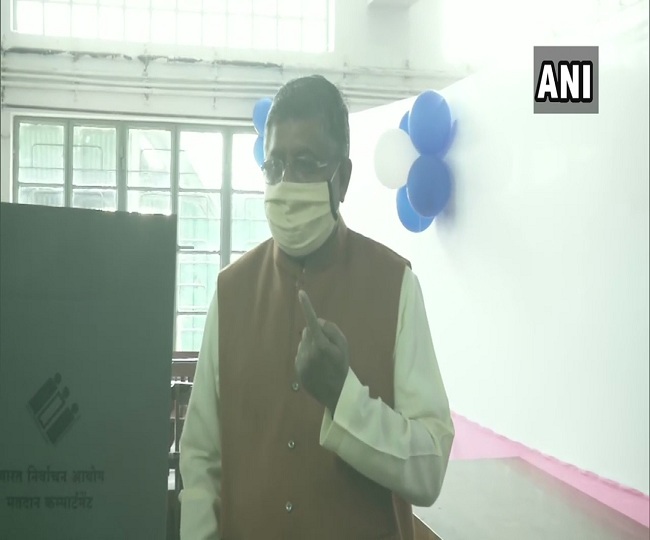 11:35 am: Not just the country, Bihar is giving a message to the world. In COVID times, people are coming out in huge numbers to vote. This is democracy's power & every Bihari's devotion to it. Think tanks around the world will evaluate how deeply democracy is entrenched in Indian minds: PM

11:30 am: Voting for the second phase of Bihar Elections is being held today, and I have been informed that the polling percentage till 10 am is higher as compared to the voter turnout in previous polls: PM Narendra Modi at a public rally in Forbesganj in Araria district

11:15 am: Chandrika Rai - father-in-law of RJD's Tej Pratap Yadav & JDU candidate from Parsa - votes in Chhapra. "Hollow promises are meaningless. If it was so easy to give 10 lakh govt jobs then everyone would make such promises, but it isn't easy," he says on RJD's poll promise.

11:10 am: Numbers to remember for the second phase of polling in Bihar Assembly Elections 2020. 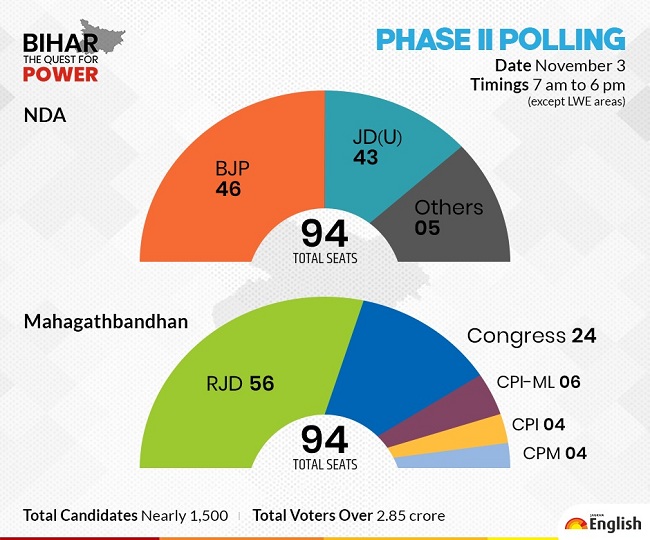 11:00 am: RJD leader and Mahagathbandhan's CM face Tejashwi Yadav writes to PM Modi. In his letter, Tejashwi attacked the ruling government and accused them of doing step-motherly treatment to the people of Bihar. Read Full story here.

10:45 am: Technical glitch detected in VVPAT at polling booth no. 201 at Salaha Chandan village on Fuhia Ghat in Samastipur during voting for the second phase of Bihar polls. Election Commission's technical team goes to the polling booth in a boat.

#WATCH | "'Mahagathbandhan' is winning everywhere, we have the whole report... people of Bihar are giving us the report," says RJD leader and former CM Rabri Devi.

Voting for the second phase is underway for 94 seats of the Bihar Assembly. #BiharElections2020 pic.twitter.com/J0Pb48Oz08

10:00 am: MoS Home and BJP leader Nityanand Rai cast his vote at a polling booth in Karanpura, Hajipur assembly constituency. 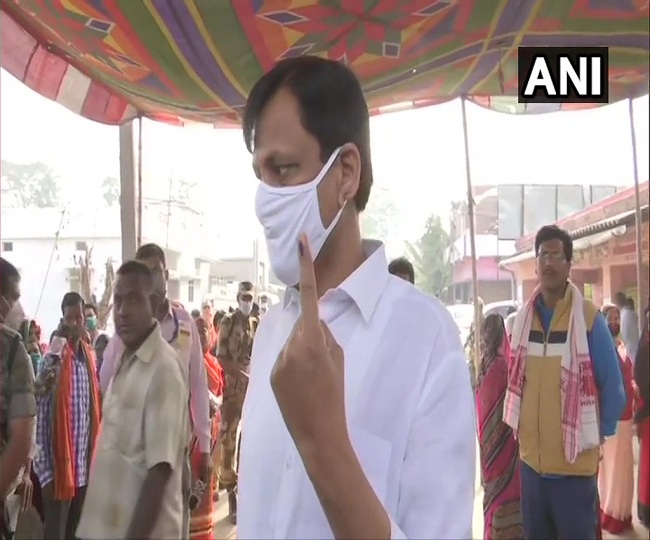 9:50 am: Chief Minister and JD(U) leader Nitish Kumar casts his vote in the second phase of Bihar Polls, at a government school in Digha. "Everyone should come to cast his/her vote," says Nitish Kumar. 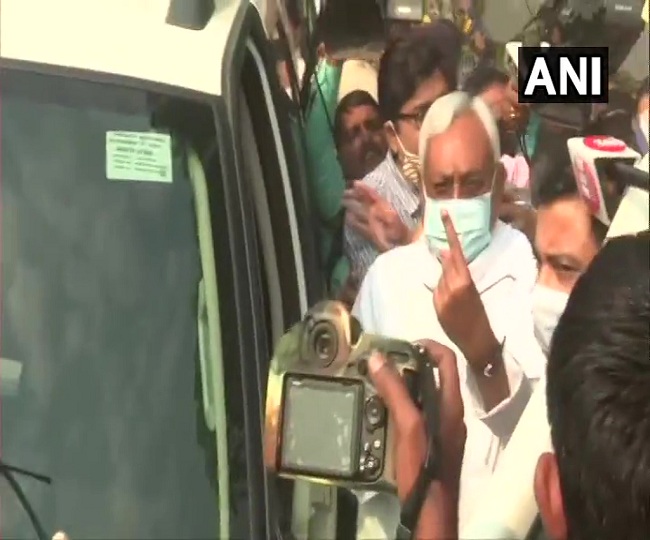 9:45 am: Voting for 2nd phase of Bihar Elections underway at polling booth no. 49 at St Joseph School in Rajendra Nagar, Patna. A local at the polling booth says, "We've been waiting for our turn to cast our vote, but Sushil ji just came, cast his vote & left. He's a VVIP.” 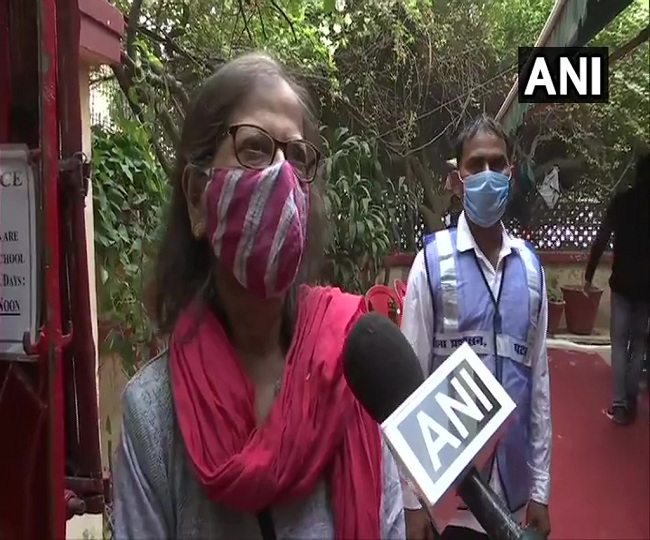 9:35 am: I appeal to people to take part in this festival of democracy. I am confident people will bring change with the power of their vote: RJD leader Tejashwi Yadav in Patna.

9:30 am: RJD leader Tej Pratap Yadav who is contesting from the Hasanpur seat in the Bihar assembly elections, says, "The public wants a change in Bihar. I appeal to people to cast their vote.

9:20 am: RJD leaders Tejashwi Yadav and Rabri Devi arrive at polling booth number 160 in Patna to cast their vote in the 2nd phase of Bihar Elections. "There is need for change and development in Bihar," says Rabri Devi, former Bihar CM and RJD leader. 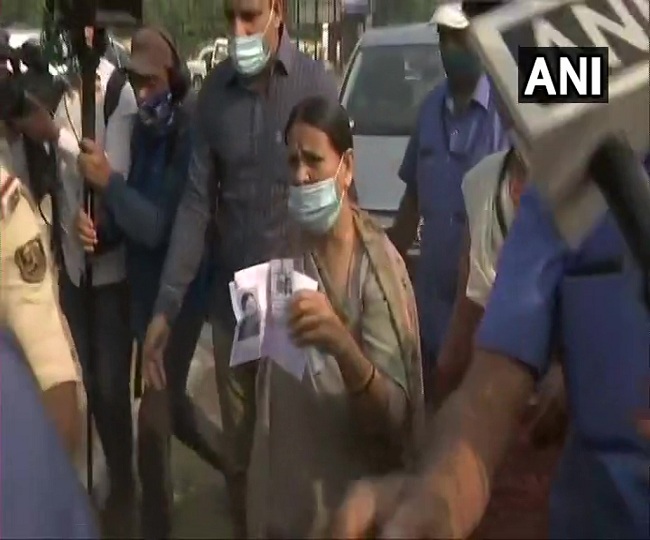 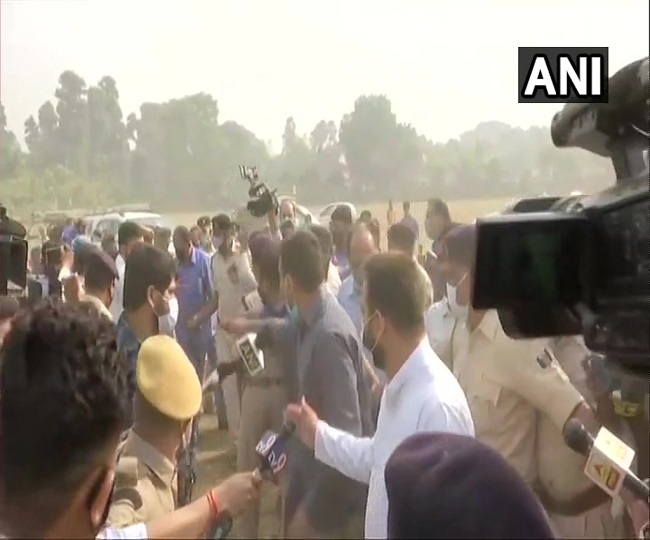 9:10 am: The poll opened at 7 am but the time for its conclusion has been extended by one hour till 6 pm to facilitate COVID-19 patients and those with symptoms of the disease to exercise their franchise in the last hour.

9:00 am: A police personnel assists a senior citizen voter who arrived to cast her vote in the second phase of Bihar assembly elections 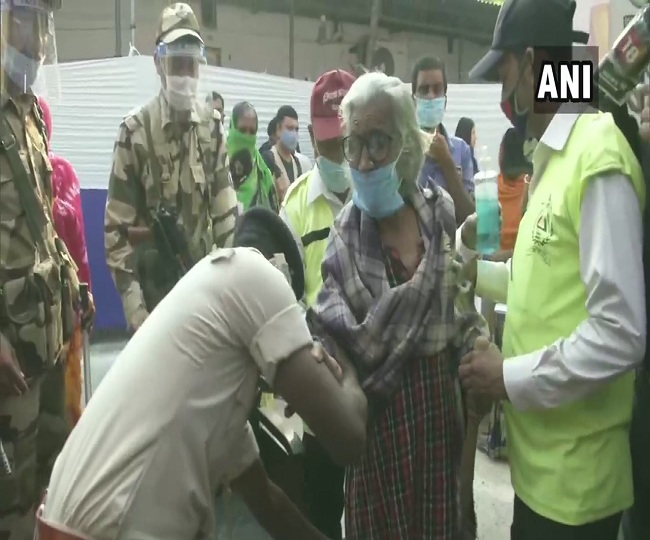 8:35 am: BJP is aiming to complete its fourth straight win in Siwan Assembly constituency. The main contest will be between BJP’s Om Prakash Yadav and Awadh Bihari Chaudhary from the RJD.  Read here to know more about Siwan.

8:20 am: Prime Minister Narendra Modi on Tuesday encouraged voters to come out in large numbers following COVID-19 guidelines to cast their votes as polling began for phase 2 of Bihar assembly elections. 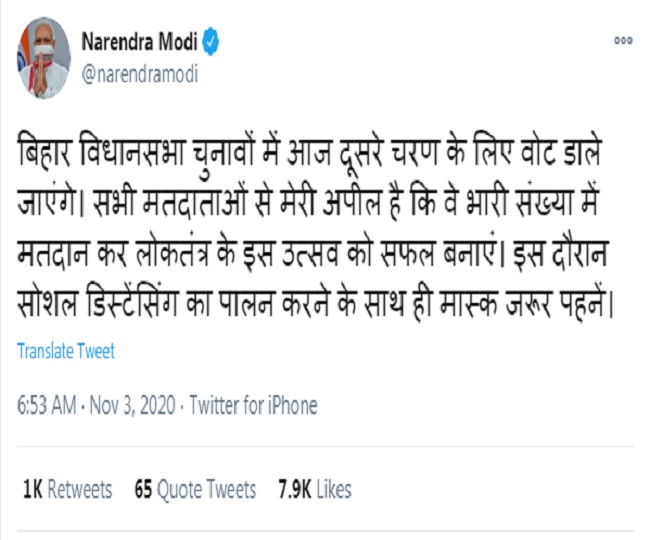 8:10 am: JD(U)'s Shrawon Kumar is seeking his sixth term on Nalanda assembly constituency seat, where Congres is challenging his incumbency. Read the full story here.

8:00 am: A girl arrived at a polling booth in Patna with her grandmother on cycle to cast vote in the 2nd phase of Bihar Elections. "I've come here with my grandmother. I'll be voting for the first time. I hope we'll have more employment opportunities for youth now," says the girl 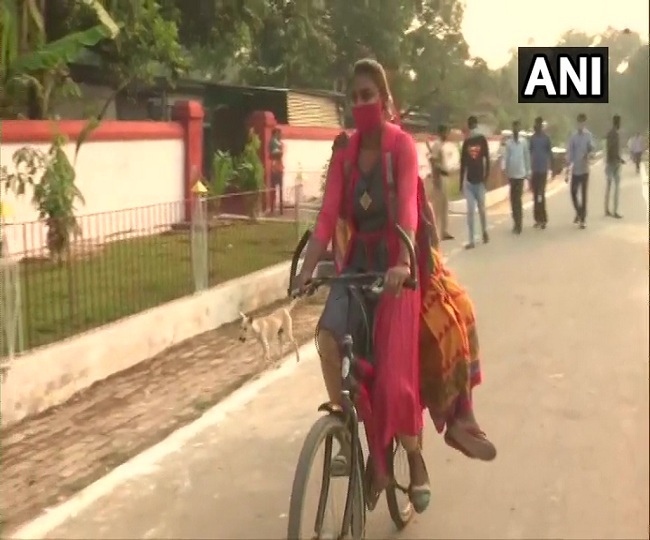 7:50 am: People follow social distancing norms while queuing up at a polling station in Bihar's capital Patna to cast their vote for the second phase of elections. 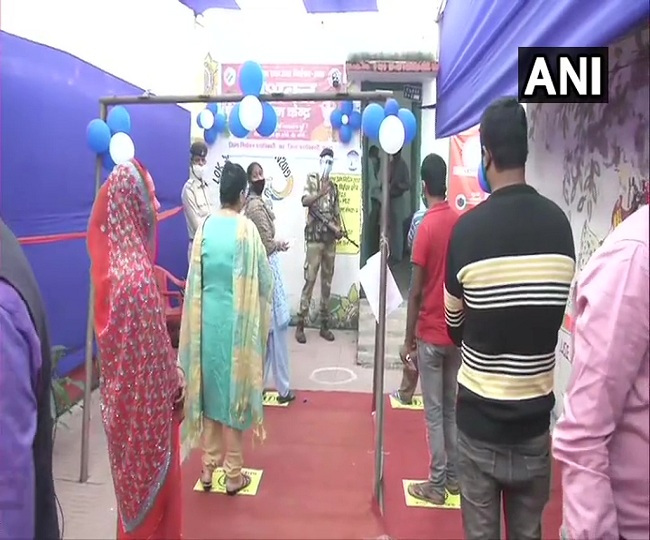 7:35 am: Ahead of casting his vote, Chirag Paswan said that Nitish Kumar will never become the CM of Bihar again. Read Full Story Here.

Bihar Elections 2020 | 'He will never become CM again, I can give in writing': Chirag Paswan's fresh barb at Nitish Kumar

7:30 am: Lok Janshakti Party supremo Chirag Paswan casts his vote at a polling station in Khagaria. 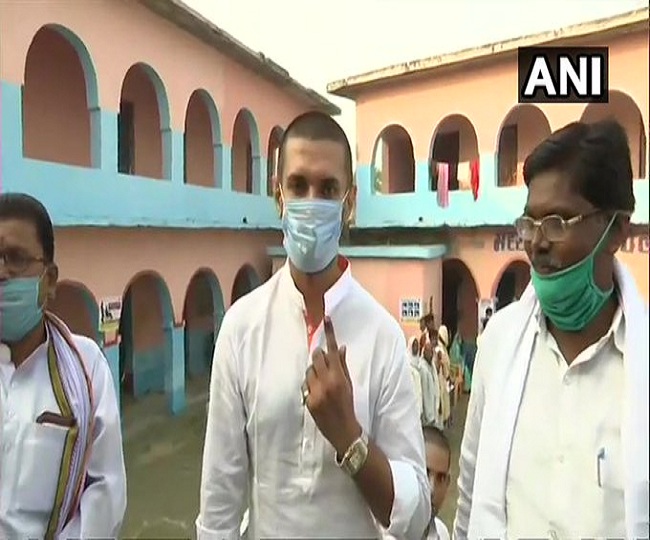 7:20 am: I appeal to the people to step out of their homes, cast their vote, maintain social distancing and keep wearing mask: Deputy Chief Minister Sushil Kumar Modi after casting his vote at polling booth no.49 at St Joseph High School in Rajendra Nagar, Patna

7:12 am: Bihar Governor Phagu Chauhan cast his vote for 2nd phase of Bihar Elections, at the polling booth at government school in Digha, Patna. He says, "I appeal to the people to participate in election in large numbers. I hope that voting percentage will be more than previous time". 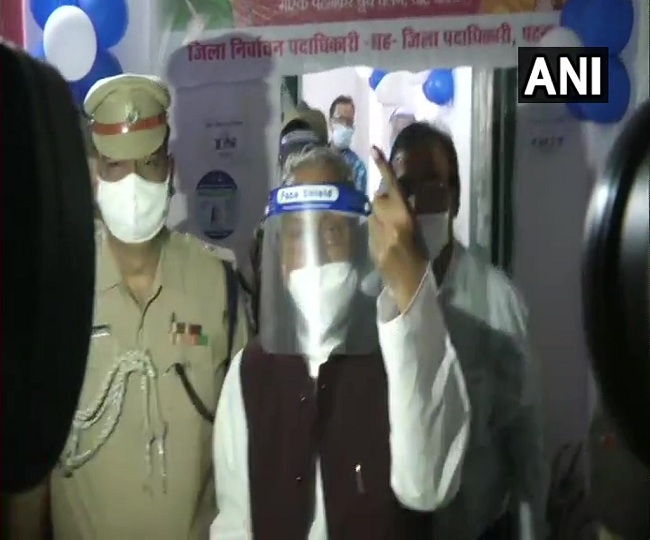 7:05 am: Voting begins for the second phase of Bihar Assembly polls. 1463 candidates, including RJD leaders Tejashwi Yadav and Tej Pratap Yadav, in fray for 94 seats across 17 districts.

7:00 am: Voters maintain social distancing as they stand in queues to cast their votes for the second phase of Bihar Elections. Visuals from booth number 24 of Raghopur Assembly constituency. 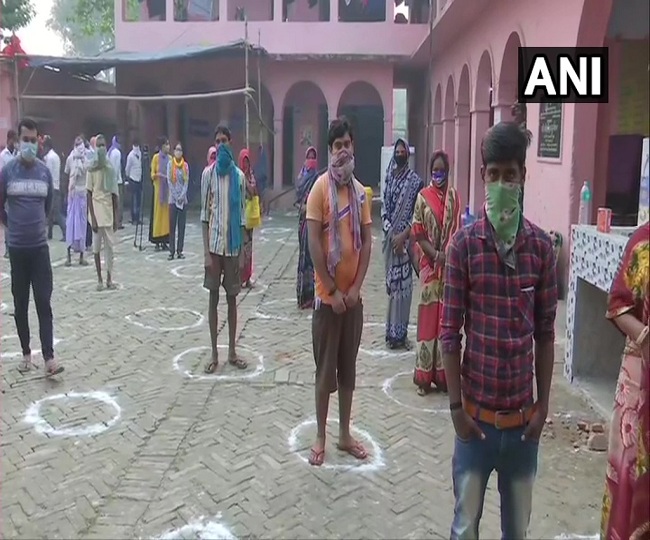 6:55 am: Visuals from St Joseph High School in Rajendra Nagar that has been designated as polling booth number 49. 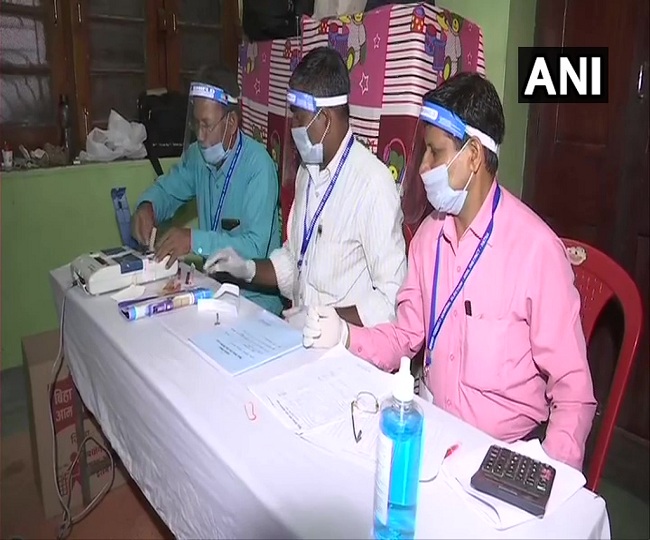 6:50 am: Sanitisation work being done at a government school in Digha that has been designated as a polling booth for the second phase of Bihar Polls. Governor Phagu Chauhan and Chief Minister Nitish Kumar will cast their votes here. 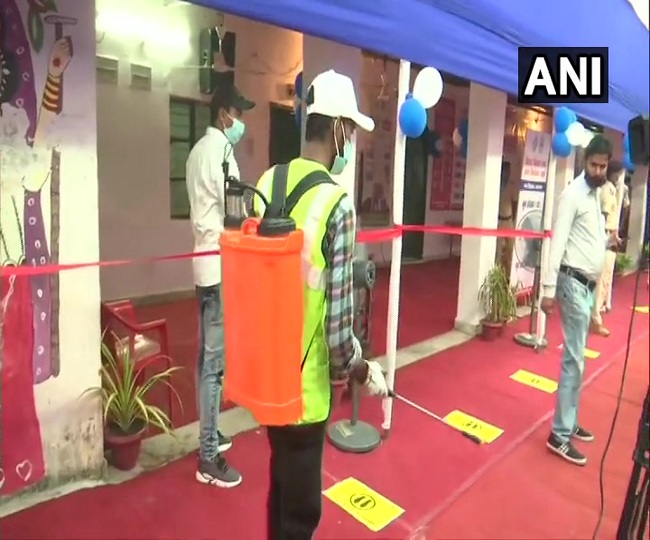 6:45 am: All preparations made at the polling booths in the state as voting for the second phase of Bihar Elections to be held today. Visuals from a polling booth number 138 in Samastipur 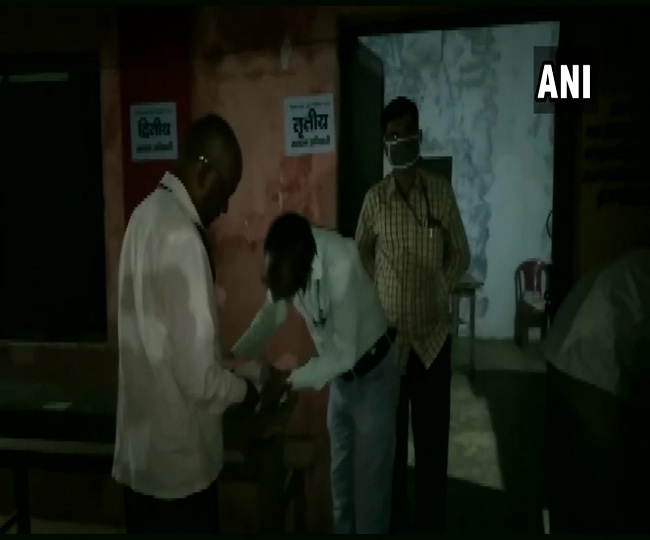 6:35 am: Preparations underway at polling booth number 8 in Khagaria. 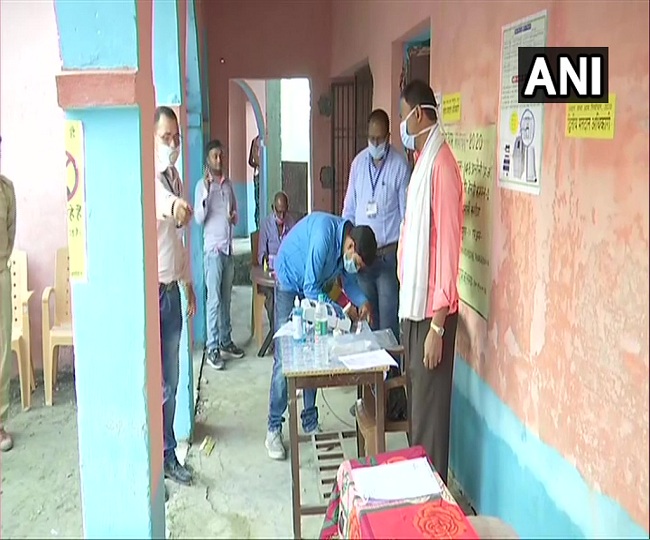 6:25 am: "You can get me to give you in writing that Nitish Kumar will never again be the CM after Nov 10. I'll have no role to play, I want 'Bihar first, Bihari first'. I want work to be done as per vision document prepared by suggestions of 4 Lakh Biharis," Chirag Paswan, LJP

6:15 am: Mock poll underway at polling booth 103 in Raghopur assembly constituency of Vaishali. RJD leader Tejashwi Yadav is contesting the state Assembly poll from this constituency. Voting for the second phase of Bihar Polls will be held on 94 seats across 17 districts today. 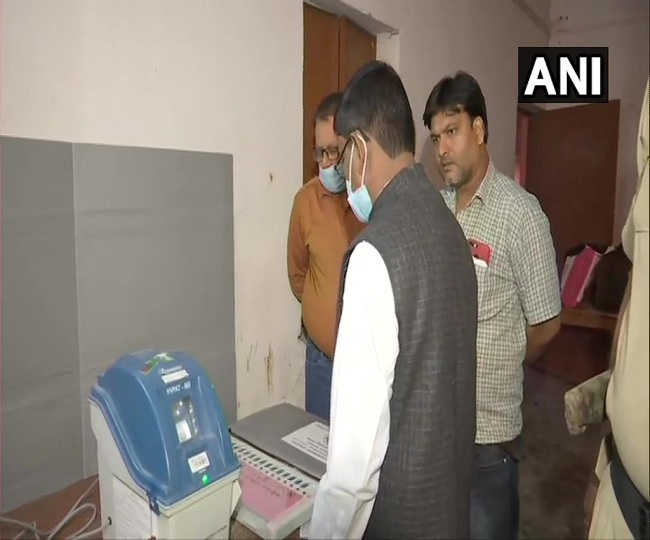