Bihar Assembly Election Results 2020: The BJP-JD(U) combine now has a clear edge over the RJD_led Mahagathbandhan. Nitish Kumar could be on course for another term as chief minister.

New Delhi | Jagran Politics Desk: The ruling NDA in Bihar was ahead of its rivals in more than half of the state's 243 assembly seats, with the BJP appearing set to outperform its senior alliance partner JD(U) headed by Chief Minister Nitish Kumar, according to trends available so far.

The Election Commission said that the counting of votes will take longer than usual and continue till late in the night because of 63 per cent increase in the number of EVMs. As trends from all 243 seats became available, the NDA constituents were ahead in 125, with BJP candidates leading the table in 72 seats and the JD(U) in only 47.

Here are the highlights on Bihar Assembly Election Results 2020:

01:15 am: Apart from two seats in Madhya Pradesh, all results of by-elections have been declared: Deputy Election Commissioner Ashish Kundra

01:12 am: Hopefully, we have the final tally in an hour: Deputy Election Commissioner Chandrabhushan Kumar

01:10 am: Results in 223 seats have been declared, 20 constituencies are left. VVPAT of 5 booths that are to be taken up for counting, those exercises are going. We hope these will be completed soon, says Deputy Election Commissioner Chandrabhushan Kumar

00:44 am: I am proud LJP did not bend down for power, our vote share increased and this will benefit us in future: Chirag Paswan

00:41 am: People have reposed their trust in PM Modi; this is his victory: LJP president Chirag Paswan

00:34 am: The Election Commission will hold a press conference at 1 am.

00:23 am: People from every section have relied on NDA's mantra of 'Sabka Saath, Sabka Vikas, Sabka Vishwas'. I would like to assure the citizen of Bihar of development in every region: PM Modi

00:16 am: Bihar taught the world the first lesson of democracy and today again it has told the world how democracy is strengthened. I assure every citizen of Bihar that NDA govt will work with full dedication for balanced development of every person: PM Modi

00:13 am: "People's blessings to NDA's good governance even after 15 years of rule shows what are Bihar's dreams and expectations," says PM Modi.

Also Read
'Imagine the condition they're in': Akhilesh Yadav's swipe at BJP for..

22:43 pm: Election Commission has assured us that they will try to address all our grievances. We trust the EC but not district administration: RJD leader Manoj Jha

22:42 pm: About an hour ago, there was a post by a party on social media claiming that their party has won 119 seats. It is to clearly state that all results are on our portal, total results declared as of now are of 146 seats, that is the factual situation: Election Commissioner

22:15 pm: "We have conducted our work as per protocol. We have never been under pressure. We are in the final stages of counting. We will be conducting a re-count in a few seats," says Umesh Sinha, Secretary General, EC while addressing media in Delhi.

21:16 pm: With a win in five seats and leads in 11 others, the CPI(ML) is all set for an impressive performance in the Bihar Assembly elections whose results will be declared late on Tuesday.

19:08 pm: The latest trends are no less than a see-saw battle between the NDA and Grand Alliance, and also between the BJP and RJD for the single largest party.

18:25 pm: As far as Bihar is concerned, on the whole 7737 scheduled rounds were there, of which 4858 have been completed. 119 constituencies have done more than half of the work which was there for counting: Deputy Election Commissioner, Ashish Kundra

18:03 pm: Bihar is going to get its own government and nobody can stop it. I request chief minister whose exit is confirmed, to stop calling returning officers to slow down the counting of votes. He can only delay his defeat: Manoj Jha, Rashtriya Janata Dal MP

17:02 pm: BJP's tact of using Asaduddin Owaisi's party in the Bihar elections has succeeded to an extent. All secular parties should be alert about vote cutter Owaisi Sahab: Congress leader Adhir Ranjan Chowdhury

16:50 pm: EVM system is robust, accurate & dependable. This has always been my view. I stand by it. There have been doubters of the EVM from across political political parties, particularly when the results don't go in their favour. Till now no has demonstrated scientifically their claims: Karti Chidambaram

14:04 pm: It has been clarified time & again that EVMs are robust & tamper-proof. Supreme Court upheld integrity of EVMs more than once. EC had also offered EVM challenge in 2017. Integrity of EVMs is without any doubt & merits no further clarification: Dy Election Commissioner Sudeep Jain

13:47 pm: Needless to say that there has been an absolutely glitch-free counting process so far. Slightly more than 1 crore votes have been counted in Bihar which means that there is significant ground to be covered yet, says Election Commission

13:44 pm: EC says the pace of counting is the same as always. However, the results might be slightly delayed due to increase in EVMs. It further reiterated that the EVMs are robust and tamper-proof.

13:43 pm: Election Commission says it hopes to conclude the counting of votes by tonight. Close to 35 rounds of counting will take place on average in each constituency, it adds.

12:35 pm: If the trends hold, the BJP is on course to become the single largest party for the first time in Bihar.

11:16 am: Three-time MLA Nitin Nabin leading from Bankipur seat. Congress candidate Luv Sinha, who is the son of Shatrughan Sinha and newly Plurals Party chief Pushpam Priya are trailing behind.

11:01 am: Sharad Yadav's daughter Subhashini is trailing from Bihariganj seat by 1,271 votes.

11:00 am: Tejashwi maintains leads in Raghopur seat by a margin of 455 votes 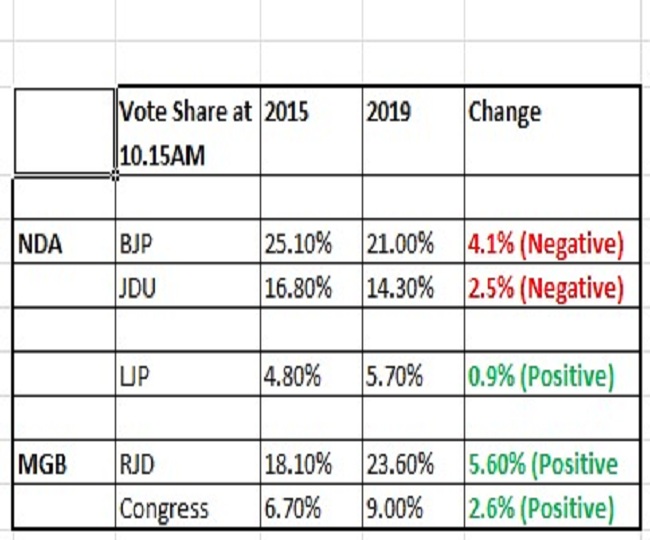 10:34 am: The NDA is currently leading on 122 seats, which is just enough to form the government. However, the Grand Alliance is giving it a close fight and is ahead on 112 seats.

10:24 am: Tej Pratap Yadav is now trailing from Hasanpur constituency. Raj Kumar Ray is leading from the crucial seat.

10:11 am: LJP leading on eight seats. Chirag Paswan could emerge as the kingmaker if no party gets a clear majority.

10:01 am: BJP leader Shreyasi Singh is leading from the Jamui assembly seat. She is a national shooter and the daughter of former Union minister Digvijay Singh. 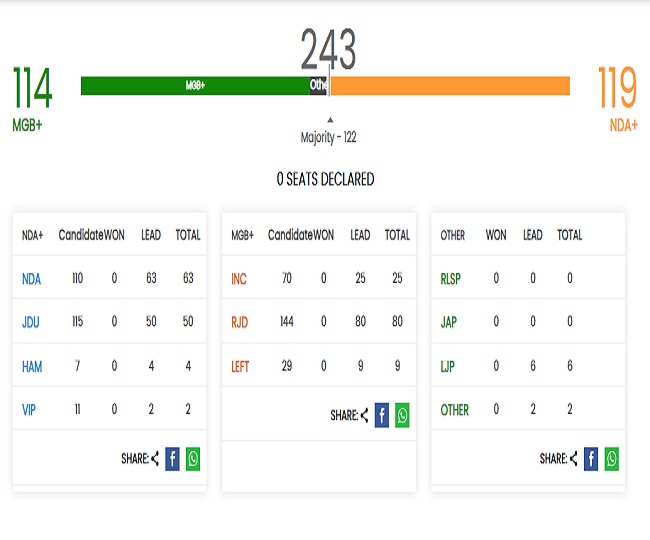 09:55 am: Trends change upside down as BJP-JD(U) is now ahead on 119 seats while the Mahagathbandhan is leading on 114 seats.

08:20 am: Counting of seats underway at Anugrah Narayan College in Patna. 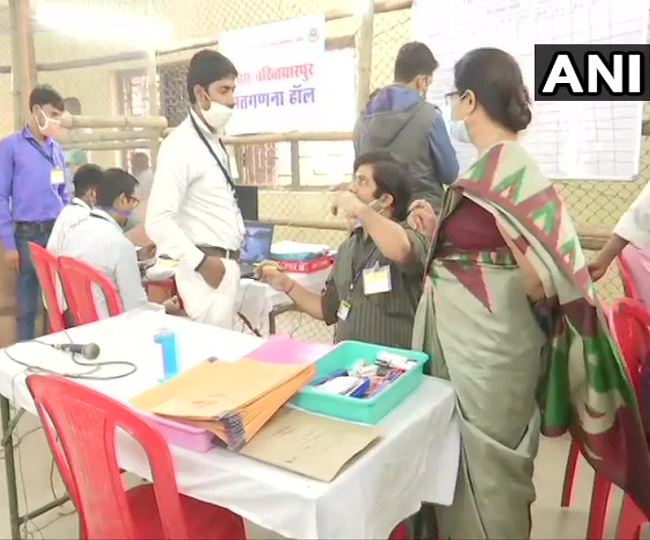 08:07 am: Postal ballot atre being counted first. The results are likely to be delayed due to the additional polling stations.

08:01 am: Counting of votes begins. Ballot votes to be counted first, followed by EVM votes. It will be interesting to see if exit poll predictions hold true.

07:58 am: Raghopur Election Results 2020 LIVE: Will Tejashwi be able to retain his home turf? Counting to begin shortly

07:55 am: Raghopur, Hasanpur, Madhepura and Bankipur are among the several key seats which will be crucial in today's counting.

07:40 am: Strong room established at Anugrah Narayan College being opened. 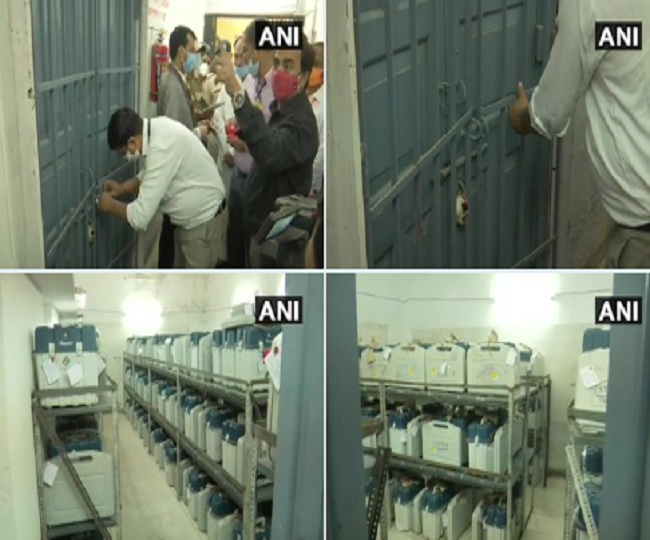 07:30 am: The voting across 243-assembly constituencies in Bihar was held in three phases on October 28, November 3, and November 7 to decide the fate of 3,755 candidates.

07:17 am: A win for the RJD-led coalition will bring a redemption of sorts for Tejashwi Yadav whose leadership abilities were called into question after his party failed to win a single seat in the Lok Sabha elections last year.

06:50 am: Bihar recorded 57.05 percent turnout in the Assembly elections this year, marginally higher than that of 2015 despite the COVID-19 pandemic.

06:45 am: BJP spokesperson Syed Zafar Islam on Sunday said that the BJP and JDU will win enough seats to form the government again in Bihar.

06:38 am: Visuals from a counting centre in Patna. 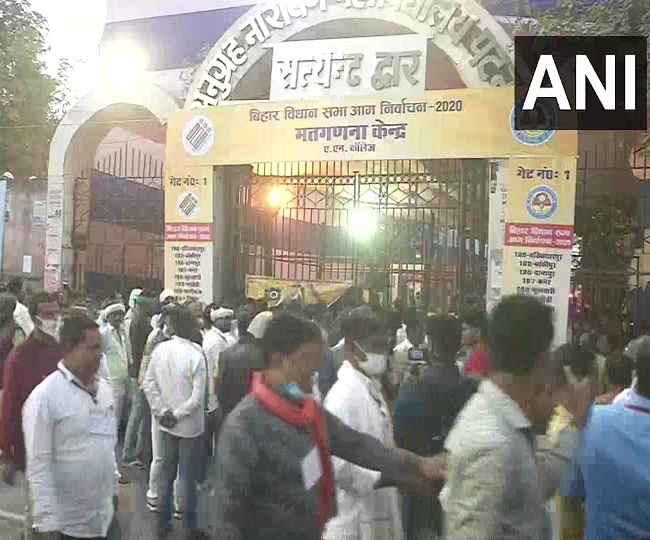 06:30 am: Shiv Sena has said that the RJD-led Mahagathbandhan will win the assembly polls. An editorial in Sena mouthpiece 'Saamana' claimed that ahead of the polls in Bihar, RJD leader Tejashwi Yadav's rallies received good response, unlike those of his political opponents.

06:15 am: Majority exit polls released after the third and final round of polls suggest that Tejashwi Yadav-led Mahagathbandhan might have an edge over the NDA. But, who will actually get the magic figure of 122 in the house of 243 will be known only after the votes are counted today.

06:10 am: The counting of votes will begin at 8 am. The ballot votes will be counted first, followed by the EVM votes and the initial trends on leading and trailing candidates are expected by 9 am.

A win for the RJD-led coalition will bring a redemption of sorts for Tejashwi Yadav whose leadership abilities were called into question after his party failed to win a single seat in the Lok Sabha elections last year. The NDA had won 39 of the 40 seats and one had gone to the Congress, an RJD ally.

It may also revive the fortunes of the three Left parties--The CPI, CPI-M and CPI-ML--which were consigned to near oblivion over the past two decades. The five-party 'Mahagathbandhan' also comprises these three Left parties, which were a force to reckon with in the past.