Bihar Assembly Election 2020: The Congress on Saturday released its list of star campaigners for upcoming polls in the state.

Patna | Jagran News Desk: The Congress on Saturday evening released the list of its star campaigners for the upcoming Assembly Election in Bihar. Apart from Sonia Gandhi, her son Rahul and daughter Priyanka Vadra, the list also includes the name of Sachin Pilot. Pilot inclusion in the list is important as he recently had revolted against the party leadership in Rajasthan, leading to a political crisis in the state. 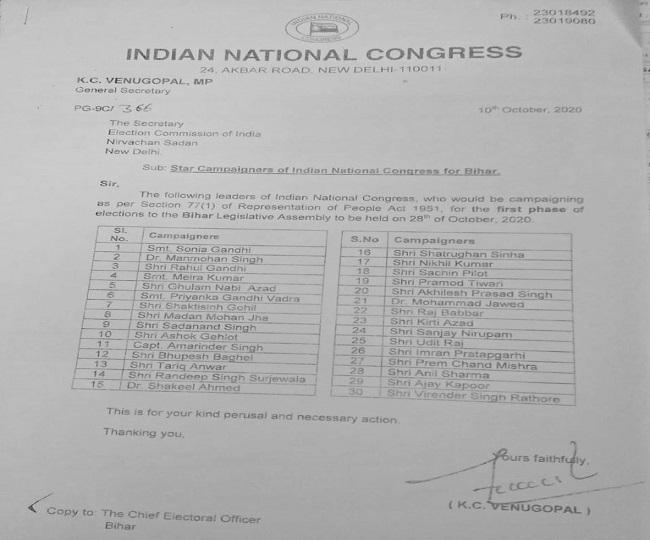 The Congress is part of the Grand Alliance in Bihar, which includes the Rashtriya Janata Dal (RJD), Jharkhand Mukti Morcha and the Left parties. The Grand Alliance, which is also known as 'Mahagathbandhan', has already announced the seat-sharing formula and has made it cleared that Tejashwi Yadav will be its chief ministerial candidate.

According to the seat-sharing formula finalised by the Grand Alliance, the Congress will contest on 70 seats while the RJD has got the lion's share of 144 seats. The Left parties -- CPI(M) on 4, CPI on 6 and CPI(ML) on 19 -- will field their candidates on 29 seats.

"All components of UPA have decided to come together as coalition for the Bihar Assembly elections. Congress, RJD, CPI, CPM and Vikassheel Insaan Party will be part of this alliance under leadership of RJD. We want Bihar to prosper under Tejashwi Yadav," Congress' Avinash Pandey had said earlier.

The Bihar Assembly Election 2020 will be conducted in three phases -- October 28, November 3 and November 7 -- amid fears of coronavirus. The Election Commission has also released the COVID-19 protocols for the upcoming polls and announced that the result will be announced on November 10.